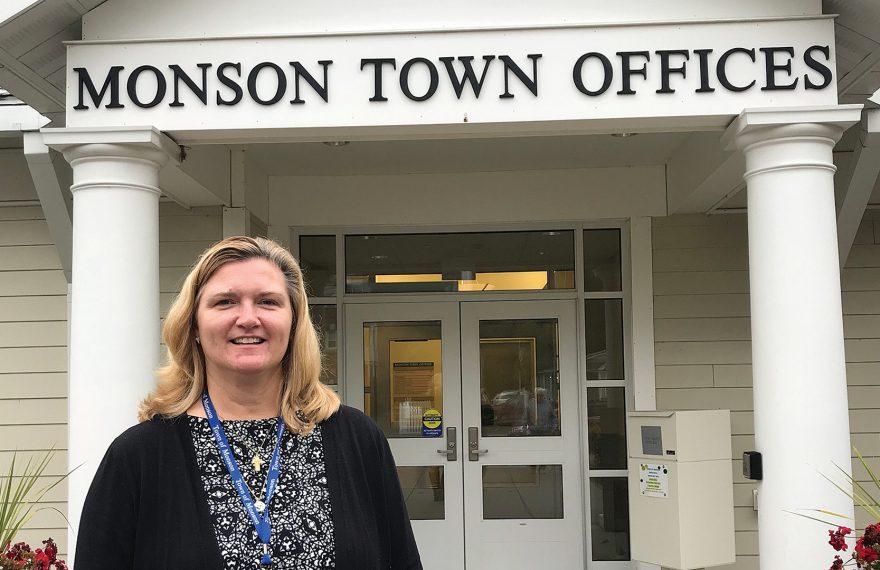 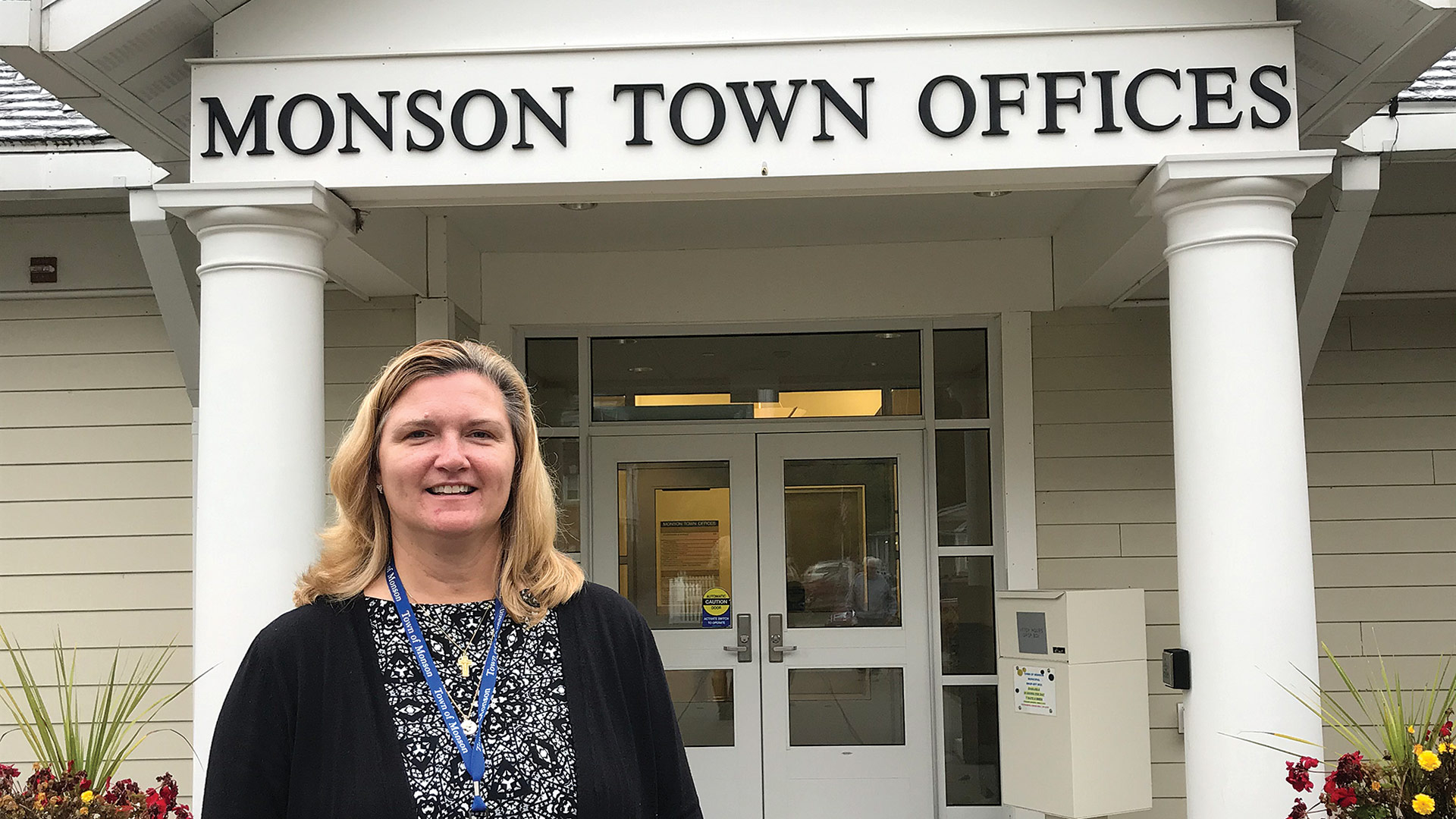 Jennifer Wolowicz says developers have been looking at some of the town’s old mills and other sites for redevelopment.

But progress is important, Town Administrator Jennifer Wolowicz says. With the town about to receive $1.7 million from the American Rescue Plan Act (ARPA), and a team at Town Hall looking at ways to use those funds, she favors infrastructure projects because she believes they offer the best return on investment.

“There are plenty of projects we could pursue that serve only part of the community, but everyone benefits from improved roads, water, and sewers,” Wolowicz said, adding that she is grateful the town has until 2026 to spend the ARPA funds. “That timetable allows us to be thoughtful in how we use the money.”

In April, Wolowicz was appointed full-time Town Administrator after working in the position since February in an interim capacity. When she first came on board, Town Hall was closed to the public due to COVID-19 mandates while the staff inside were busy trying to figure out how to provide the services residents needed. Some town business moved online, but many residents prefer to pay their bills in person, so Wolowicz and her staff installed drop boxes and even offered some outdoor service.

“With a little education and reassurance, we helped people figure out different ways to get business done,” she said.

These days, Town Hall is fully open. The Monson Select Board has relaxed mask mandates in general, but they are still required in schools. Wolowicz pointed out that COVID numbers have been trending lower than in the past, and currently, 56% of residents have been vaccinated.

“There are plenty of projects we could pursue that serve only part of the community, but everyone benefits from improved roads, water, and sewers.”

Meanwhile, back in January, Andrew Surprise became the new CEO of the Quabaog Hills Chamber of Commerce, which covers 15 towns in the region, including Monson. Surprise admits that, in the past, the chamber had been losing touch with local communities. To address that, he has begun reaching out to Monson businesses to establish a business civic association (BCA).

“The idea is to form a business community in Monson,” Surprise said. “With local people concentrating on the issues that are important to their business and community, it helps the chamber to better focus on ways they can help.”

Upon joining Quabaog Hills, Surprise noticed the chamber did not have strong contacts with local officials at the town or state level.

“As a former city councilor [in Westfield], I’ve seen how important it is for the chamber to have these relationships,” he said. “By connecting businesses and local officials, we can offer better value to everyone involved.” 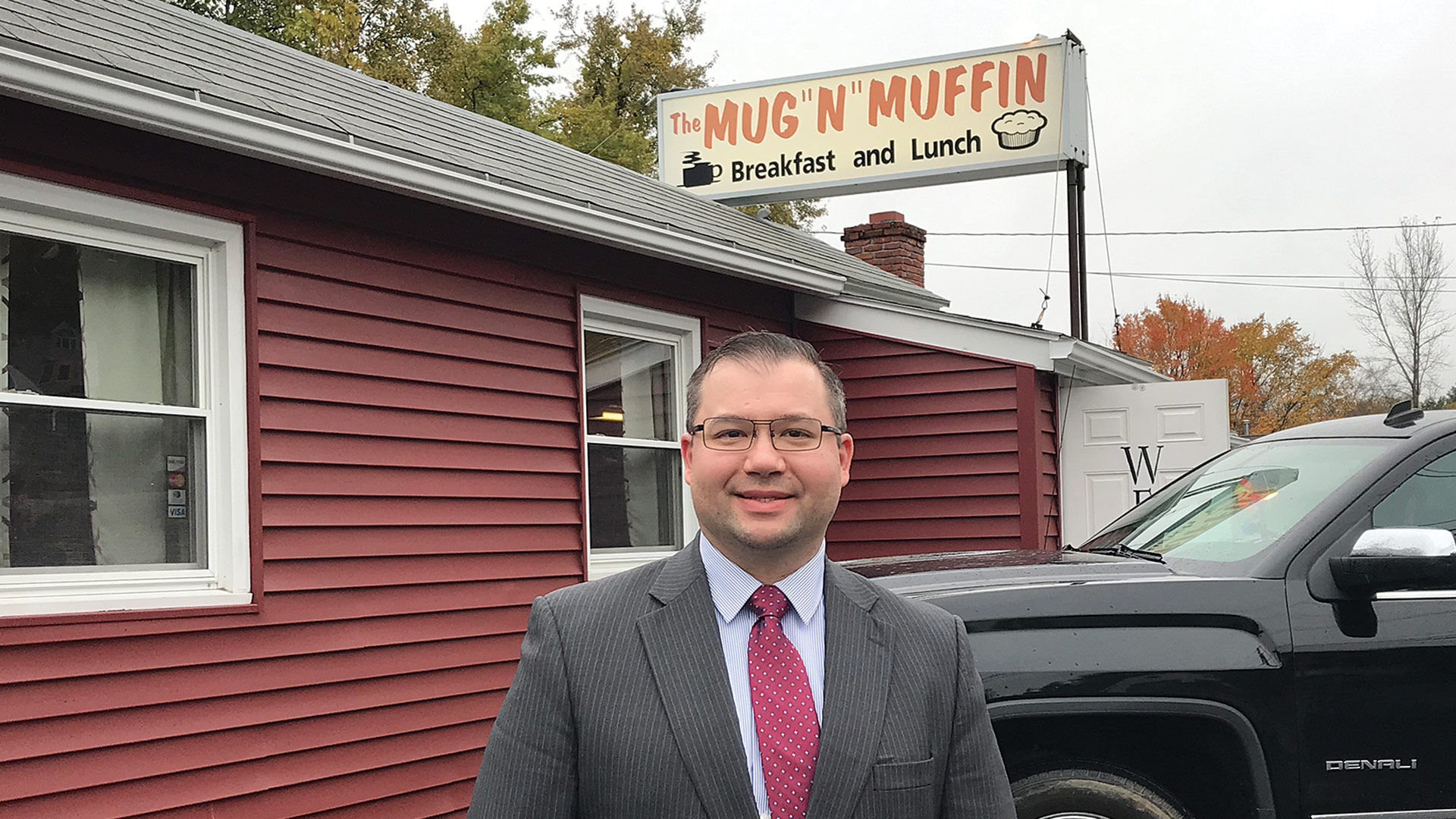 Andrew Surprise, CEO of Quabaog Hills Chamber of Commerce, is on a mission to introduce himself to businesses in Monson.

Coordinating efforts is already paying off. Surprise began working with Wolowicz on the idea of a BCA while the town was in the process of seeking a Rapid Recovery grant from the Pioneer Valley Planning Commission. Knowing that Monson was looking to have a business organization focused on its needs, the PVPC advised Surprise and Wolowicz to make it a joint request. Surprise said the BCA will be formed no matter what, but a grant makes a more robust effort possible.

“The grant would allow a much more expansive implementation and enable us to speed up the building of the BCA,” Surprise said. “Also, the grant makes it possible for the chamber to hire a person dedicated to establishing and recruiting for BCAs in both Monson and Belchertown.”

Much of Monson’s business community can be found right in the heart of town, so BusinessWest asked three Main Street business owners about the idea of a business civic association.

Nissa Lempart, owner of Monson Optical, said the BCA is a good idea if the goal is to reach more people outside of town. “My customers already know where we are, and they tend to keep their business in Monson.”

Richard Green, who owns Richard R. Green Insurance Agency, said that, in his experience, many people tend not to do business in town, so he believes a BCA would be a big plus for Monson.

“It would be a way for local businesses to interact more with the community while benefiting each business and the community at large,” he noted. “I think it would be fantastic.”

Bill Belanger, who has owned Belanger Jewelers for more than 30 years, called Monson a wonderful community, and he’s open to the town taking a different approach to business.

“While the small-business model remains an important part of Monson, we also need to open our doors to new thinking.”

“While the small-business model remains an important part of Monson, we also need to open our doors to new thinking,” he explained.

Part of that new thinking would allow larger franchises to do business in Monson. In 2020, residents staged a vocal rejection when Dollar General proposed a location in town.

“Dollar General might not have been the right fit for our town,” Belanger said. “But there are many other types of national businesses that would work well here.”

Monson at a glance

Wolowicz noted that Holistic represents a large tax base for Monson, as the town received $500,000 in tax revenues from the company in June. Holistic-grown products are sold by Liberty Cannabis retail stores in Springfield, Somerville, and Easthampton. “COVID was good for cannabis sales,” she noted.

In terms of seeking other growth for the town, Wolowicz said discussions are taking place with developers about reusing some of the older mills in town. There is also activity at the former site of the state-owned Monson Developmental Center, where several buildings are being taken down. She said some residents have questioned why the town isn’t involved in redevelopment of this parcel.

“These folks don’t understand this is state property and the cleanup is their project,” she noted. “Their plan is to bring it back to green space and hopefully give the land back to the town at some point.”

For the last year and a half Monson, has been making energy-saving improvements to schools and municipal buildings. Part of the project involves converting the current street lights to LED fixtures.

“Even Town Hall, which was built in 2014, will be getting new lighting because that’s how fast technology has changed,” Wolowicz said.

The town also works with neighboring communities on wider-ranging projects. For example, Monson has signed an agreement with Palmer and Ware to convert the town dog pound into a regional animal-control facility for use by the three communities. That project is expected to take place next year.

That’s a fair amount of activity for a town whose Main Street has no traffic signals.

“There are many folks in town who are passionate about keeping it that way,” Wolowicz said, adding that she favors controlled development to keep Monson a vital community.

Belanger expressed a similar sentiment. “Encouraging more business is a way for the community to advance without losing what makes it special.”

While Monson keeps its small-town feel, there is no shortage of new business proposals landing on Wolowicz’s desk.

“We many not be a booming metropolis,” she said, “but we still have opportunities to pursue controlled development.”