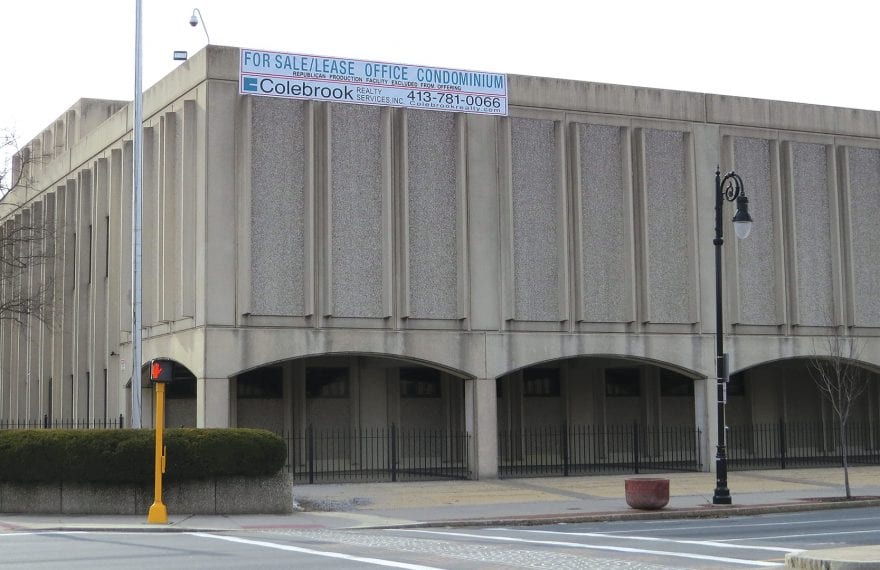 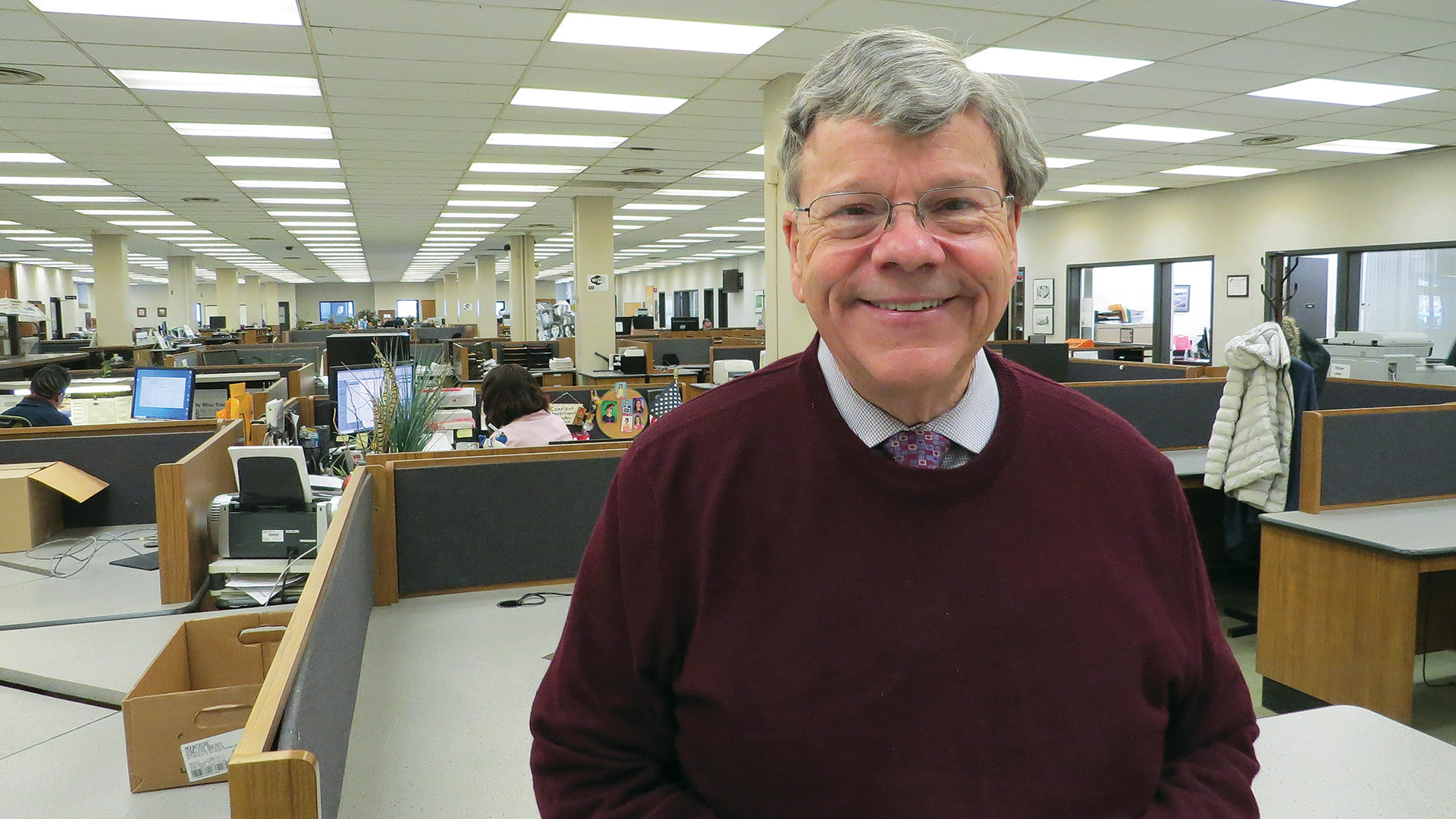 Republican Publisher George Arwady says the newspaper’s staff can fit into perhaps one-third of the space in the building on Main Street, prompting an effort to sell or lease that real estate.

The sign just went up on the top of the structure a few months back. But the Republican building on Main Street in Springfield has been for sale or lease, on one level or another, for the better part of a more than a decade now.

Thus, it has become part of a regional and national story involving newspapers and commercial real estate. Technology has changed, papers have consolidated operations, and staffs have become smaller — those last two trends accelerated by a sharp decline in the fortunes of most all newspapers as interest in print advertising has waned. Thus, those papers’ real-estate needs have changed accordingly. And sometimes dramatically.

So it is in Springfield and at the Republican, part of Advance Publications, where publisher George Arwady estimates that the business — meaning the non-commercial-printing side of the venture (he stressed that repeatedly) — now requires not even half, and perhaps not even a third, of the roughly 64,000 square feet in the office building opened more than a half-century ago.

“We had maybe 500 people working in this building in the heyday — that’s when we were producing three newspapers, the Daily News, Union, and Republican, that were all competing against each other. There were competing newsrooms, competing circulation departments … they threw things over the fence at one another,” said Arwady, who came aboard as publisher nine years ago but certainly knows the history. “We might have 100 non-production people here now; we certainly don’t need all this space.”

Which brings us back to that sign. It announces loudly what has been widely known for years now — that there are large quantities of what Jack Dill, a principal with Colebrook Reality Services, which is now marketing the property, described as flexible, conveniently located space available for lease or sale as business condominiums.

And if someone wanted the whole building (again, not the huge commercial-printing operation), they can have that, too, if the price is right, said Arwady.

Indeed, he said the staff at the paper could easily be relocated into 20,000 square feet of space, and perhaps even less, in any of a number of downtown office buildings.

The fact that there are a number of properties that could accommodate them, including all the major office towers and several other buildings, including Union Station, helps explain why there has been little movement on the Republican space over the years, and why the sign has gone up on the property.

“It’s a buyer’s market, and certainly not a seller’s market,” said Arwady, noting, as area commercial real-estate brokers and managers have for some time now, that there is what amounts to a relative glut of office space in downtown Springfield, at least when compared with much hotter markets such as Boston, Cambridge, and even Cleveland.

In that last city, another Advance newspaper, the Plain Dealer, has relocated to smaller quarters, and its now-former headquarters has been sold and redeveloped. Something similar has happened at a number of other Advance publications, said Arwady, including the one in Grand Rapids, Mich. (the Press), and the Gazette in nearby Kalamazoo, where he once worked, where the newspaper property was acquired by a hospital group.

“They kept a portion of the old building, designed by a famous architect, and they built a large addition with offices,” he explained. “And the paper moved into nice space three blocks away in downtown Kalamazoo.”

And in Grand Rapids, he went on, the Press building was sold and redeveloped; it is now part of what’s known as the Medical Mile, a renowned healthcare destination. 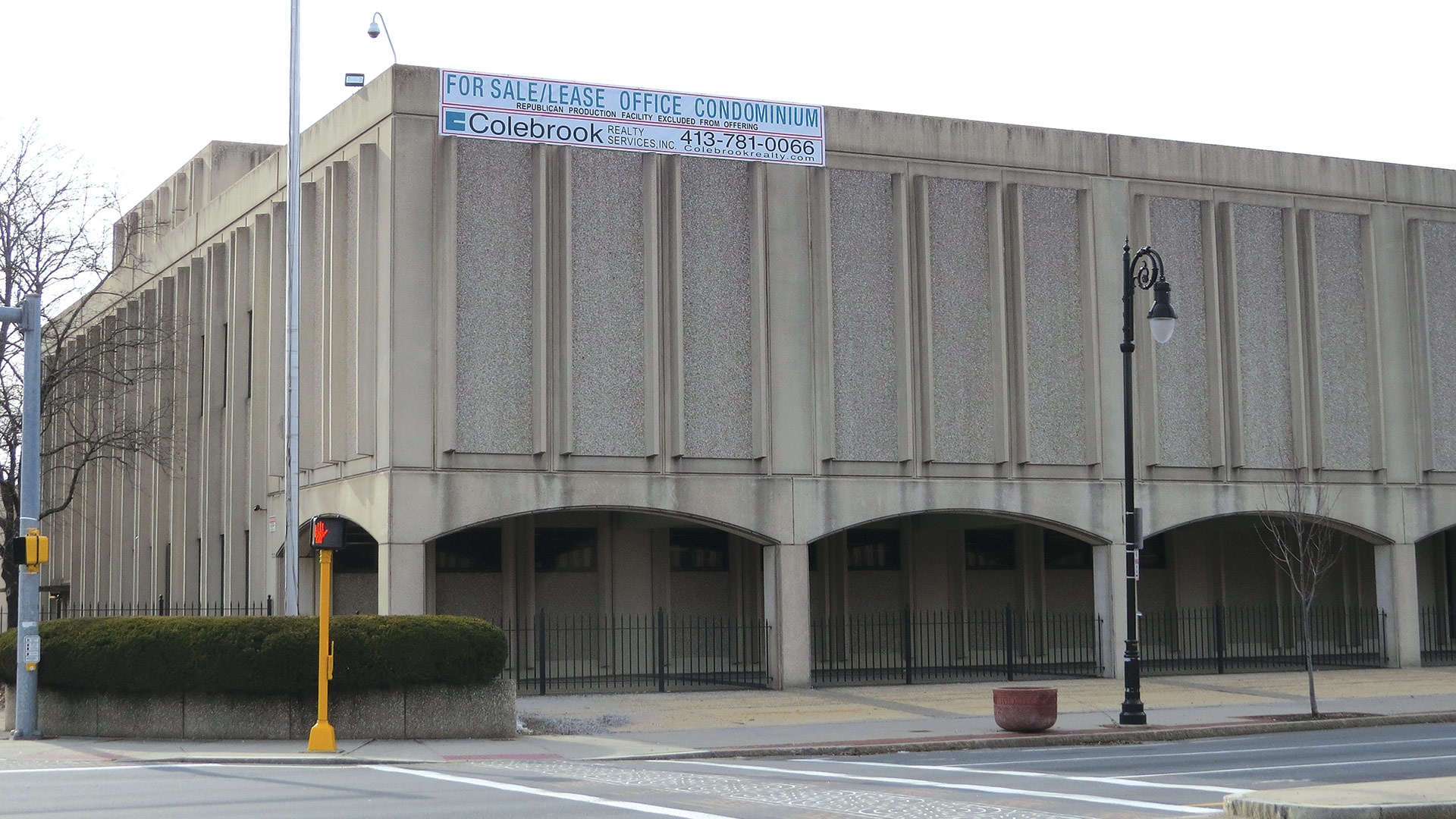 “We’ve done this stuff all over the country, so we’re experts,” Arwady said of the Advance group, noting that the story has been replicated, to one degree or another, with newspapers — and communities — of all sizes.

The pattern has continued regionally as well, with a number of newspaper properties, perhaps most prominently the Boston Globe’s former headquarters building on Morrissey Boulevard in Dorchester being sold and redeveloped.

The Globe left its 700,000-square-foot complex in 2018 after nearly 60 years at that location, and took up residence on Washington Street — not far from where it had operated starting in 1870. It sold the Dorchester property to developer Nordblom, which is reshaping it into something called BEAT (Boston Exchange for Accelerated Technology). Plans call for 360,000 square feet of office and 300,000 square feet of flex, light industrial, and lab space that will likely include a craft brewery.

“It’s a massive project; the site is being totally redeveloped,” said Dill, who attended Boston College High School across the street. “That’s an example of what’s happening in cities across the country.”

And the Republican almost had a success story to top all these others. That’s almost.

“The solution for each market has been different. And at the end of the day, all real estate is local, as Tip O’Neill said about politics, and you have to find solutions that are available and practical and economical in the place that you happen to be located.”

Flash back to 2013 when there were briefly three Springfield casino proposals vying for the coveted Western Mass. license. In addition to the South End blocks now occupied by MGM Springfield and a short-lived proposal to build where CRRC is now assembling subway cars, Penn National, which now operates the slots casino in Plainville, wanted to build a casino on a large parcel that included both the Peter Pan bus terminal (now home to the Way Finders headquarters under construction) and the entire Republican parcel, including the massive printing operation.

“Somewhere, I have an option to buy that’s this thick from Penn National,” said Arwady, placing his thumb and index finger roughly two inches apart. “They were going to take the whole shooting match and build me a new production facility — the city was trying to get me to go into the industrial park; we were going to move all the office people downtown. And they were going to pay for the whole thing.”

Since the MGM plan got the nod in Springfield and then with the Gaming Commission, Arwady has essentially been trying to forge a successful plan B, and he acknowledged that doing so will be somewhat challenging because the market remains soft in Springfield. But he nonetheless remains optimistic that the property can regain the vibrancy it had 30 and even 20 years ago.

This optimism is based on a number of factors, starting with that prime ingredient in commercial real estate — location. Indeed, the property is visible from — and lies almost underneath — I-91, and also just off 291. Meanwhile, the bus and train stations are right across the street.

Beyond location, the building, described by Arwady as a “concrete fortress,” has abundant free parking (a rarity in the downtown area) and flexibility in that he believes it can accommodate everything from retail to professional offices to a variety of different cannabis-related businesses.

“We even have a large vault,” said Arwady. “And a vault is the most attractive thing you can have, from a commercial real-estate perspective, for a cannabis company, because it’s still an all-cash business and they can’t use the banks.”

Dill told BusinessWest that he can envision a number of different potential redevelopment opportunities at the site, including office space, education-related uses, and perhaps co-working space. And flexibility — meaning the ability to respond to a market’s needs — is an important quality when redeveloping such structures, because each real-estate market is unique.

“The solution for each market has been different,” he explained. “And at the end of the day, all real estate is local, as Tip O’Neill said about politics, and you have to find solutions that are available and practical and economical in the place that you happen to be located.”

Over the past several years, a number of entities, from law firms to education-related facilities, have toured the property, said Arwardy, adding that he believes this interest will eventually translate into a transformation of the property into other uses — perhaps several of them.

This has been the trend — or the story — when it comes to newspapers and commercial real estate, and the story is ongoing. u