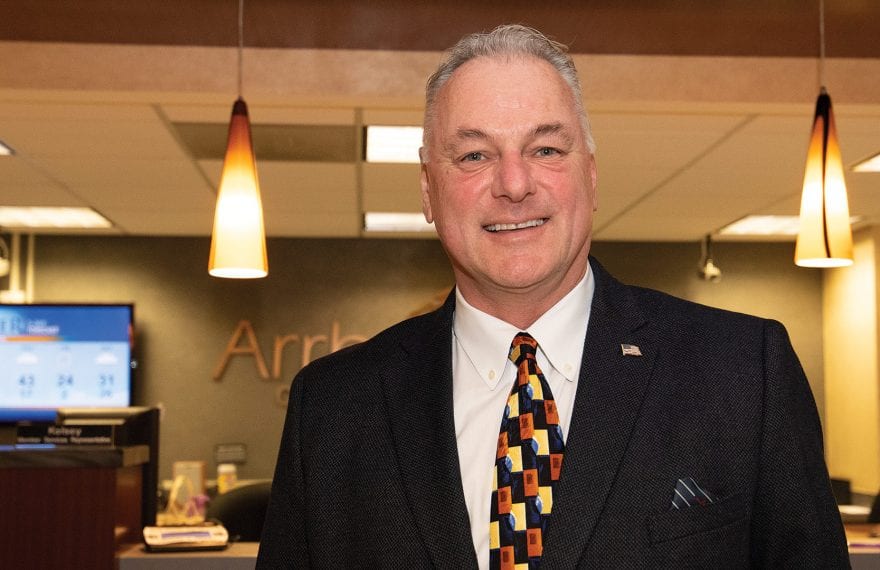 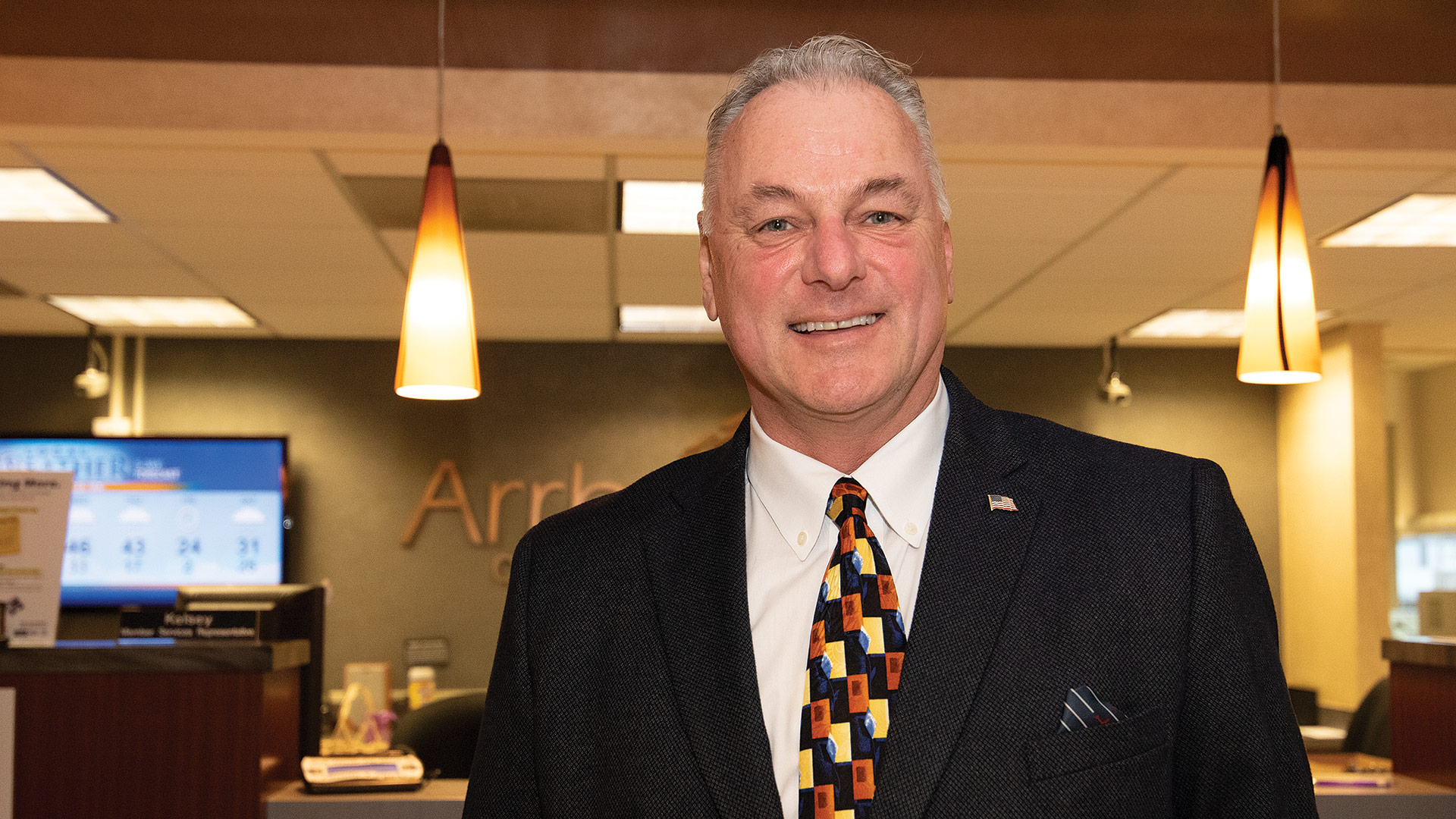 Arrha President and CEO Mike Ostrowski says credit unions have in many ways filled the void left by many of the smaller community banks that have disappeared from the landscape. To take full advantage of opportunities that are presenting themselves, an institution must have a blend of size and nimbleness — and a name that resonates. He believes Arrha has all three.

Because … that’s what it is. The Osa Peninsula in southwestern Costa Rica is quite remote, and that’s what Ostrowski, president and CEO of Arrha Credit Union, likes about it.

“I have a little hut there — there’s no electricity, there’s no anything,” he explained while grabbing his phone to show photos of the area. “I typically go down there for two weeks; I alternate between living in the jungle and this tiny fishing village where I’ll stay for a few days. That’s my release.”

The upcoming trip, one coinciding with his 60th birthday later this month, will be a shorter stint, only six days, he said, adding that this is a good time of year to go because the fishing is good — he’ll be looking to land blue marlin and black tuna — and it is not rainy season.

“That comes in June,” he said. “And when it rains, it rains. It’s unbelievable how much water comes down. It’s like standing in a shower.”

He’ll return from this trip to a jungle of a different sort — a rapidly changing landscape in banking and financial services. It’s not exactly a hostile environment, but there are plenty of challenges — from razor-thin margins resulting from historically low interest rates to ever-escalating regulation — and competition that comes in all shapes and sizes and from all directions.

To survive and thrive in this environment, he told BusinessWest, an institution needs a solid blend of size and nimbleness and he believes Arrha — that’s the new brand that the former Springfield Teachers Credit Union assumed roughly five years ago — is strategically aligning itself to achieve both.

“We’ve been building that [commercial real-estate] business slowly and methodically for several years now. But it’s accelerating because of that vacuum created when banks like United leave; there’s no question that we’re taking advantage of opportunities like that.”

While size has become increasingly important in this age, that nimble quality is critical as well, he said, especially with all that competition, including the ever-growing roster of fintech companies offering everything from platforms with which the pay bills to risk-management services to payment-protection solutions.

“They’re all nipping at our heels for the dollars that a typical credit union or bank might get,” Ostrowski explained. “We’re fighting the battle on that front, and, fortunately, we have some of the best technology available; we can do anything they can do, and we can probably do it better because we’re local.”

But amid these many challenges there are also opportunities, he said, especially as a pattern of mergers and consolidations within the banking industry continues, such as with the recent acquisition of United Bank by Peoples United Bank.

As banks get larger and more of them become publicly held, he noted, credit unions have in many ways taken the spot once occupied by many of the smaller community banks that have disappeared from the landscape.

“And that’s a healthy thing,” said Ostrowski, who has spent the past 37 years in the financial-services sector and worked for a number of those community banks, including United, where he got his start, and Ludlow Savings. “That’s a normal progression of the industries; we’re looking to fill a void, a vacuum; people want to deal locally. The solid credit unions are taking the place of those local banking institutions that were around.”

All of this, in a nutshell, is the strategic plan moving forward, he said, adding that the bank is looking to introduce ITMs (interactive teller machines) in its two locations, possibly by the middle of the year, and create what he calls the ‘branch of the future,’ something that will become a model for possible future expansion into smaller physical spaces.

This model involves the interactive technology, the ITMs, but also the human touch in the form of banking professionals making sure customers are comfortable using that technology and that all their needs are met.

“We’re not reinventing the wheel,” he said, noting that the technology is already in place in several area institutions. “We just want to be on the cutting edge; this concept will be taking off soon, and I want to be on the forefront of it.”

For this issue and its focus on banking and financial services, BusinessWest talked with Ostrowski about Arrha’s strategic plan moving forward, one that calls for smart growth, taking advantage of the opportunities presenting themselves, and positioning itself for life in this jungle.

Ostrowski has a small collection of bobbleheads residing atop a bookshelf in his office at Arrha’s Springfield’s facility on Industrial Drive.

When asked about it, he quickly deferred to a different collection, one that has more meaning.

This is an assemblage of coffee cups bearing names of financial institutions he once worked for. A few have been turned upside down, Ostrowski’s way of indicating that the bank in question made some key strategic mistakes, which in some cases led to that brand disappearing from the landscape. 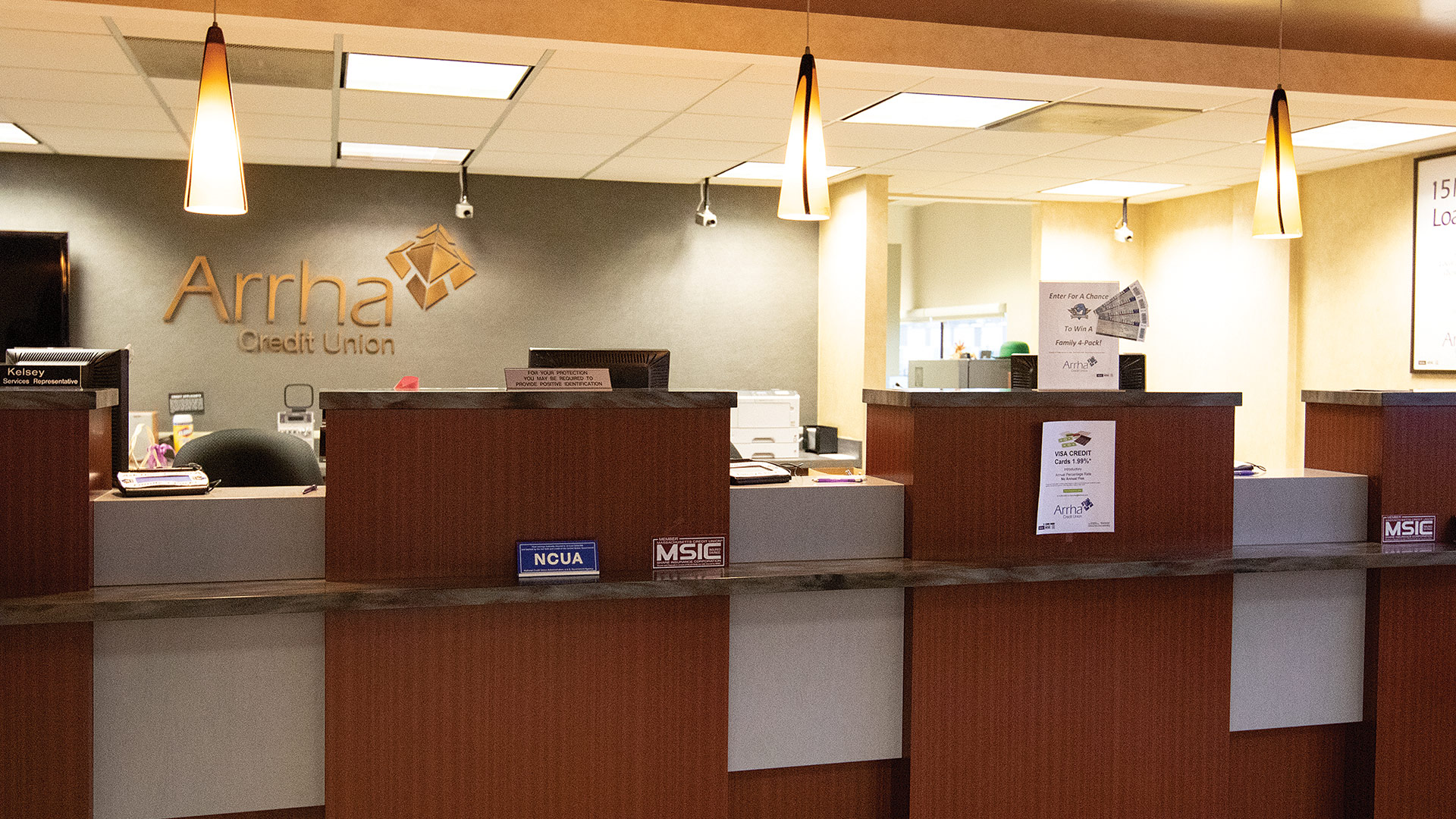 Mike Ostrowski says Arrha will soon be introducing ITMs and creating what he called the ‘branch of the future.’

Opting not to go into specific details about any of these institutions, he hinted strongly that many of these mistakes involved trying to grow too quickly, taking unwarranted risks, and becoming something the bank wasn’t.

And he’s committed to not making these mistakes with Arrha, a credit union that first operated out of a classroom at Commerce High School in Springfield at the dawn of the Great Depression. His plan is for slow, steady growth — in memberships, assets, deposits, commercial loans, and perhaps locations, although he has no immediate plans to broaden the portfolio beyond the current two.

In short, he intends to continue living up to the credit union’s still somewhat new and unusual name — Arrha, an old English word that translates into ‘money in exchange for a contract, a pledge in earnest.’

Ostrowski said the name change was needed because the former name, Springfield Teachers Credit Union, and even the shortened version, STCU, didn’t adequately convey that membership was open to anyone who lives or works in the three counties of the Pioneer Valley.

The new name does — sort of — but often needs to be explained. Ostrowski doesn’t mind; in fact, he looks forward to doing it.

“That’s exactly why we picked the name — it gives us a chance to tell the story,” he told BusinessWest. “So, from a marketing perspective, I think it’s brilliant.”

The story, at present, is of a still relatively small credit union — it’s in the middle of the pack among area institutions of this type with roughly $140 million in assets — working to grow and position itself for success in the long term.

As for growth, Arrha has seen a steady rise in membership, said Ostrowski, noting that, over the past 18 months or so, it has gained more than 1,500 and now boasts more than 11,500.

“If we were Boston, where there’s a lot of inflow of people, I would not be too happy with those numbers, but given where we are and what the statistics show, I’m quite pleased,” he said, noting, as all other bank and credit-union leaders do, that this is, by and large, a no-growth area. Meanwhile, even though Arrha’s expanded criteria for membership — Hampden, Hampden, and Franklin counties in addition to some of Northern Conn. — appears broad, it is still somewhat restrictive, at least when compared to most banks in the region.

In this no-growth environment, the institution must look to do more with existing customers and offer more services, such as commercial lending and commercial checking accounts. Arrha expanded into this realm several years ago, and has built a solid portfolio, most of it involving commercial real estate.

“We’ve been building that business slowly and methodically for several years now,” he explained. “But it’s accelerating because of that vacuum created when banks like United leave; there’s no question that we’re taking advantage of opportunities like that.”

As with all other aspects of the credit union’s operation, the commercial side of the ledger is driven by relationship-building efforts, he said, adding that these relationships are developed far more through trust than interest rates.

While working to build the membership base and commercial portfolio, Arrha is also taking a number of steps to attract younger audiences, said Ostrowski, noting that these initiatives involve everything from financial-literacy programs involving area high-school students to digital marketing programs, to making sure the credit union remains on the cutting edge of technology — something that’s quite necessary to get and keep the attention of Millennials and those behind them.

“It’s a tough generation to reach,” he acknowledged, adding that digital marketing is fast becoming the most reliable method. “And some of them have never been inside a bank or credit union.”

Still, all members of this generation will eventually need what he called a “warm hug” — the personalized service they’ll need when filling out their first mortgage application or looking to buy a business.

“And we’re here for them when they need that warm hug,” he went on, adding that Arrha is enjoying some success with attracting the younger generations, as evidenced by the fact that the average age of its members has gone down — by two years — while that number has been going up industry-wide.

“That tells me that we’re achieving what we’re intending to do when it comes to reaching out to that generation,” he said, adding that, specifically, this is the 25-to-35 age group.

And if all goes according to plan, when these individuals — and all other customers — enter one of the Arrha locations later this year, they’ll be stepping into that ‘bank of the future’ Ostrowski mentioned.

The credit union is currently in the exploratory stage on the new technology, with plans to implement the changes perhaps six months from now, he noted, adding that the institution will do its homework and due diligence and make sure this important work is undertaken properly.

He expects that the blend of technology and human touch will resonate with not only Millennials, but all generations. And he believes it could also serve as an effective model for smaller, highly efficient branches in the future, facilities that could enable Arrha to expand its physical presence to other communities.

“This will give us the ability to do additional branching at a lower cost structure,” he explained, adding that a facility with a few ITMs and perhaps two or three staff members would need only 1,000 square feet, and perhaps half that, as opposed to a traditional branch several times that size.

Ostrowski said he was inspired by what he saw at an institution in the Washington, D.C. area, which had ITMs and three roving employees qualified to handle everything from car and mortgage loans to wire transfers, and is looking to do something similar here.

“They had the ability to handle every banking need — but they weren’t wasting their time doing transitional deposits or withdrawals,” he said. “It’s a far more efficient way to do things, and it’s still very member-friendly.”

That branch of the future seems a long way from that hut on the Osa Penninsula — in every way imaginable.

But they’re both in a jungle in some respects.

This jungle in the 413 is a highly competitive environment where, as noted earlier when mentioning banks not around anymore, survival is not assured. It can be secured by being forward-thinking, on the leading edge of technology, and customer-friendly.

In short, it happens by avoiding the kinds of mistakes that would prompt Ostrowski to turn a coffee cup upside down.

And that, in plain, basic terms, is the business plan for Arrha.