The Principles of Supply and Demand Are Driving Prices Skyward

In July 2021, the Bureau of Labor Statistics released an unusual piece of data: the average price of used cars and trucks had increased a whopping 42% over the previous year. Given the constraints in the supply chain, this extraordinary jump was dismissed as an aberration; in fact, the total increase in consumer prices that month was one of the sharpest in recent history. Interestingly, the consumer price index (CPI) category that had the second-largest uptick? Energy.

Energy is sensitive to inflation. Prices may experience higher volatility in the short term, but ultimately supply and demand is what drives the price. It’s surprising that investors and analysts did not pay more attention to these fundamental metrics at that time.

During the 2008-09 Great Financial Crisis, congress, passed two acts to rescue the financial system from near ruin, authorizing a total of $1.5 trillion in stimulus funds. Financial markets recovered and the economy expanded, albeit at a moderate pace. The first piece of legislation was at the end of Bush’s second term and the second passed two months into Obama’s first term. 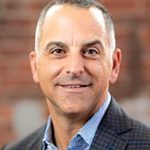 “The fundamentals of supply and demand will support the persistence of inflationary pressure, and the occupant of the White House, past or present, has little to do with that.”

Two years ago, the planet faced a crisis not seen since the 1918 influenza pandemic: COVID-19. To combat it, countries locked down, effectively grinding commerce to a halt. In response, Congress enacted nearly $2.5 trillion of stimulus assistance, and Federal Reserve banks used their monetary tools to make capital markets even more liquid. In the third week of March 2020, extreme investor panic caused stock prices to bottom out.  But then Americans started to spend again, and in a big way. The economy strengthened quickly and by October the unemployment rate was approaching pre-Covid levels, at 5%, after skyrocketing to nearly 15% in April.

Today, unemployment sits at 4% and inflation is running at a 4.8% annualized rate, the highest in three decades. The difference between 2020 and now is there are nearly 11 million open jobs, the most since the Bureau of Labor Statistics started tracking the data. Rising wages and attractive benefits have failed to attract enough workers, and so the supply chain issues have gotten worse as jobs go unfilled.

This sharp increase in demand — due to a strong economy, massive stimulus, and unique constraints on global commerce — has put upward pressure on the prices of consumer goods. The price of oil provides an easy and familiar example. Notably, the cost to gas up our cars or heat our homes has soared dramatically. As oil prices increase, so does the cost of transport, which affects almost all consumer goods. Currently, a barrel of oil is $95.

Blaming the White House for inflation is lazy. Macroeconomics are based on supply and demand, and demand is white hot at the moment. Every administration has dealt with volatile oil prices. Indeed, $100 oil is not remotely novel. Consider this: during George H.W. Bush’s term, in the throes of the Gulf War, oil hit $145 per barrel. At the end of Obama’s second term, 26 price was about $91 per barrel. Since January 2001, oil has fluctuated between a low of $27 and a high of $145 (all during George W. Bush’s presidency) but has risen steadily over the past two decades. Here are the stats: 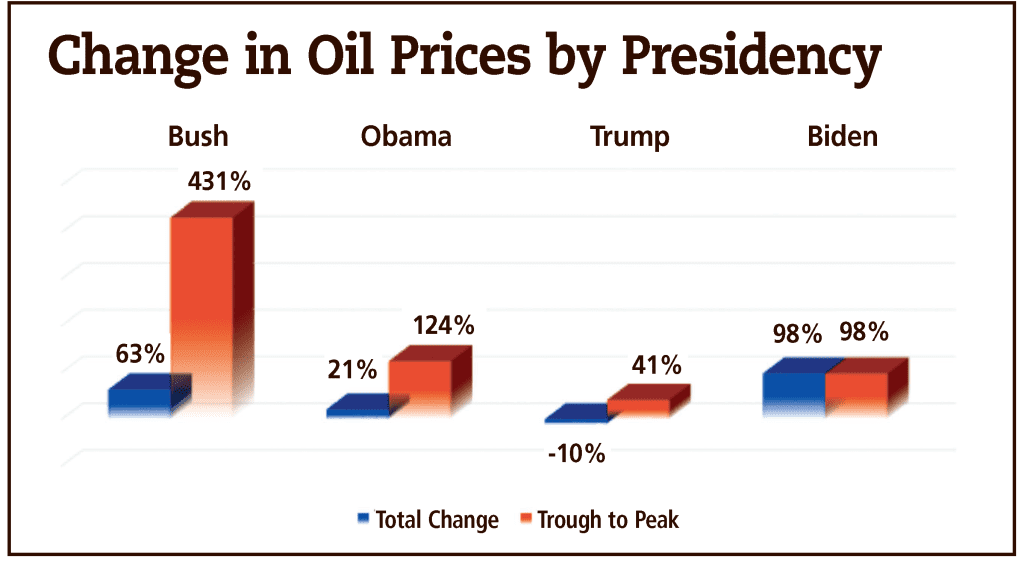 During the worst of the pandemic, there was a healthy supply of oil and demand fell off a cliff as global travel ceased overnight. Large oil refiners were paying to offload oil. Headlines like this one from Politico in April 2020 were common: “Oil prices go negative — and Washington is paralyzed over what to do.” And while the president has some influence via the strategic oil reserves and negotiations with OPEC, those tools only affect the supply side of the equation.

Economics is a cycle. Investing is a cycle. Even our careers go through cycles. And we cannot know with certainty the long-term consequences of measures taken at the crisis points of any of these cycles. Politics has become so polarizing that we pick our sides and blame the other for almost any adverse event, especially when it affects our financial well-being.

Geopolitics is hot right now because of the tensions in eastern Europe. Beyond the worry of what war brings, Russia is the third largest oil producer in the World behind Saudi Arabia and the United States. The global energy trade may see disruption, and energy prices are likely already reflecting that. It is unlikely, however, that the US consumer’s ability to spend will be dampened. The fundamentals of supply and demand will support the persistence of inflationary pressure, and the occupant of the White House, past or present, has little to do with that.

Jeff Liquori is the co-founder and chief Investment officer of Napatree Capital, an investment boutique with offices in Longmeadow as well as Providence and Westerly, R.I.; (401) 437-4730.