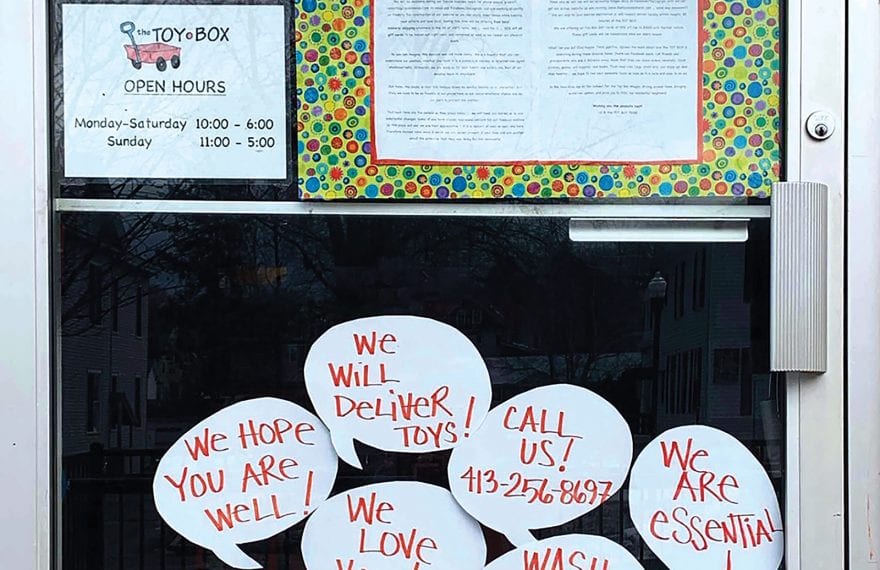 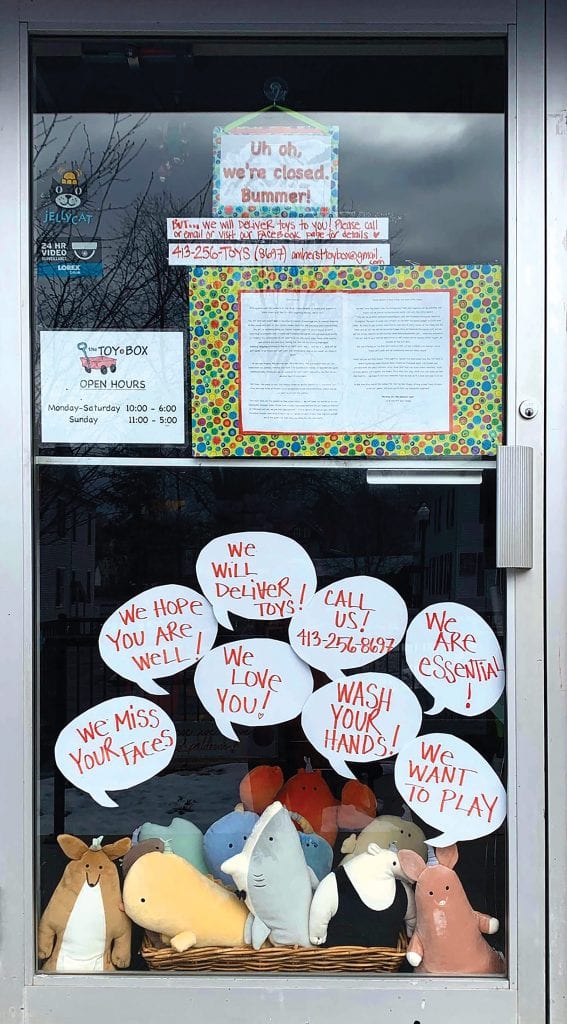 Liz Rosenberg says customers appreciate the messages on the front door of the Toy Box, as they wait for her to reopen that door.

One of Liz Rosenberg’s favorite games — to both play and sell — is called Lion in My Way.

“It’s for ages 5 and up,” said the owner of the Toy Box in Amherst. “You’re presented, in card form, with obstacles, like a lion in your way, a giant wall, all sorts of things. And then you have a hand of cards that are ideas how to get past this obstacle — maybe a catapult or balloon or a sandwich to feed the lion. You have to create the story. I feel like this is the greatest game.”

And not just because she feels like she’s living it every day.

“It’s a great lesson in, ‘ugh, yes, this is awful, but what do I have in my pocket that I can use to get past the awful part and start making progress?’” she continued. “It’s all here in this game.”

Retailers across Massachusetts being told, three months ago, to close their doors indefinitely? That’s no game — but Rosenberg has been playing some effective cards.

She recalls shuttering her shop on Sunday, March 15. “But I knew I was going to be in the next day to figure something out, and by the end of Monday, I was delivering toys,” she said. “I’ve heard a lot of people say, ‘building the airplane as you fly it.’ It felt a lot like that.”

The strategy was to offer delivery within 20 minutes of the store — which gave her some solid territory to cover without infringing too much on similar stores in the region.

“It allowed me to get in my car in the morning and drive to the store and open it up, work all day, and at 2:00 make a route map and deliver to people’s driveways, and then go home,” she explained. “I didn’t have to interact with anyone.”

She soon found this model was actually functional, and used the Toy Box’s Facebook page to showcase as many items as possible to keep customers engaged. “My website is under construction, and now isn’t the time to focus on that, and people require visuals,” she said of her Facebook photo albums.

She also spends plenty of time offering gift ideas over the phone. “I find myself absolutely cracking up, standing here trying to describe something, my hands moving, hoping they get a visual on this. It’s really entertaining.”

The result hasn’t been anywhere near normal sales volume, but it has kept the shop afloat.

“But I knew I was going to be in the next day to figure something out, and by the end of Monday, I was delivering toys. I’ve heard a lot of people say, ‘building the airplane as you fly it.’ It felt a lot like that.”

“I didn’t know what it would bring in; I didn’t really think about success,” Rosenberg told BusinessWest. “I just thought about day by day, and at the beginning of this, that’s where everyone’s head was — ‘it’s 10 in the morning; where is life going to be at 11?’”

Another card she drew on was humor — “because that’s how I live.” For example, the first day the doors were closed, she arranged a group of stuffed animals in the store window, with speech bubbles offering messages like “we miss your faces” and “we will deliver toys” and “we love you!”

“I can’t tell you the number of people I’ve seen from behind the register, taking pictures outside the front door. It makes me giggle.”

In the past couple of weeks, Rosenberg has played the curbside-pickup card — well, parking-lot pickup, “because we don’t have a curb” — and continued a popular gift offering known as ‘mystery bags,’ for which customers provide the recipient’s age and pay a discount price for a surprise assortment of goodies, such as putty, markers, stickers, mini-games, bouncy balls, and more.

“People trust our judgment on things their children or grandchildren or friends’ children might like,” she explained. “People tell me the age of the child and a couple things about them, and I put together little activities to keep them busy, keep them curious, and keep them educated. It’s gone over really well.”

Rosenberg is hoping to reopen the Toy Box in mid-June, depending on the guidance she gets from Boston, and is mulling ideas like shorter hours — perhaps half-days, or full days by appointment only — so she can manage staffing and sanitizing in a safe manner.

“As much as we’d like to be open for business, I only want to do it safely — against the virus and against unnecessary worry and anxiety,” she noted. “Anxiety is a real thing, and I don’t want people feeling forced to come into the store. So I will continue with deliveries and parking-lot pickup because, in my mind, that’s the safest way.”

One of the speech bubbles in the window reads, “we are essential.”

That may not be true in the eyes of Gov. Baker, but Rosenberg is quick to note how important it is for kids — who have, after all, been cooped up in their homes for about three months now — to experience joy through play.

“We are essential — not necessarily from the government’s perspective, but from families’ perspective. Parents are being required to stay home and work and be parents at the same time. That’s a challenge beyond all challenges. To be able to assist with that … that’s my job. I’m lucky to be in a position where I can bring some joy.”