Local Firm Solves the Riddle of Cannabis and Credit Cards 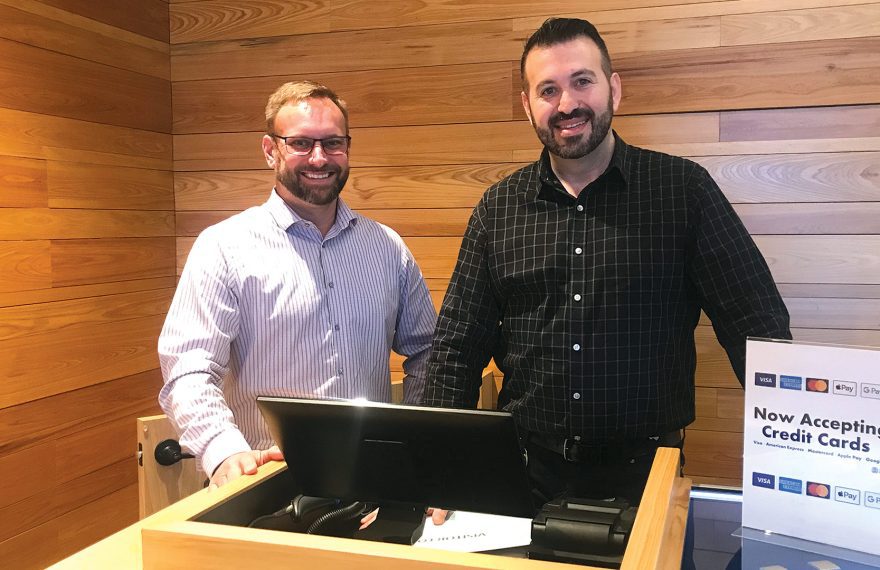 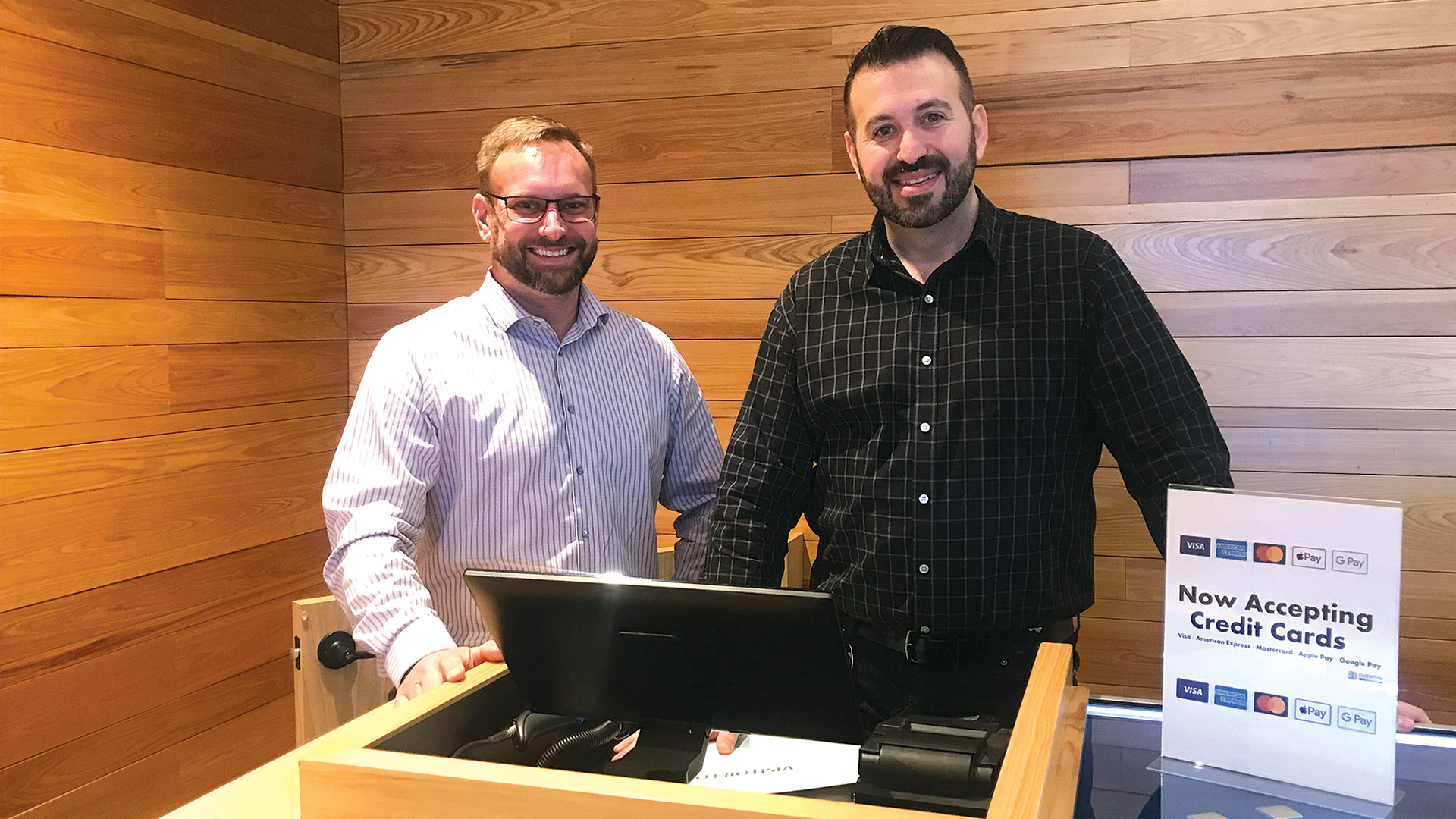 Since cannabis became legal in Massachusetts consumers have had to pay for their purchases with cash or a debit card. At a dispensary in Southampton, that has changed in a big way.

Beginning Feb. 14, customers at Dreamer Cannabis have been able to use their credit cards to purchase cannabis products.

“The term ‘game-changer’ gets thrown around a lot, but for this industry that’s pretty huge,” said Kevin Perrier, a partner with Dreamer Cannabis.

Because cannabis is legal in only 18 states, federal law prohibits credit card companies such as Visa, MasterCard, and American Express from accepting cannabis transactions in their systems.

Perrier and Volkan Polatol, his partner at Dreamer Cannabis, were exploring the idea of a cannabis delivery business when their research revealed an innovative way several cannabis companies in California were accepting payments by credit card.

“The method is similar to the way Venmo works,” Polatol said. Venmo is the peer-to-peer payment app that allows individuals to quickly exchange money with each other.

While credit card companies will not process cannabis transactions, accepting payments from third-party platforms is legal and compliant. When a Dreamer customer uses a credit card, the transaction is processed by a third-party platform which uses blockchain technology through the InterPlanetary File System (IPFS) to process the purchase. According to its website, IPFS is a peer-to-peer network that uses blockchain to make the web faster, safer, and more open. Blockchain is known for keeping data secure and for providing a permanent record of the data. For this reason, a growing number of banks support blockchain transactions.

“California has a more-developed cannabis market as they’ve been working with it much longer than any other state. Trends in cannabis seem to start there and migrate east.”

Credit card companies recognize blockchain transactions as legal and compliant, so they receive the data of the purchase through the blockchain and the consumer receives the charge on their bill.

While blockchain is often associated with Bitcoin and other cryptocurrencies, Perrier said the system use by Dreamer Cannabis is not involved in any cryptocurrency.

“Most people are not familiar with crypto, it’s complicated to use and it’s not stable,” he said. “The system we use runs on blockchain, but does not use crypto.”

Perrier said he and Polatol dug deep in their research and spoke with dispensaries in California who use this platform, eventually selecting a company from the Golden State.

“California has a more-developed cannabis market as they’ve been working with it much longer than any other state,” Perrier said. “Trends in cannabis seem to start there and migrate east.”

After looking into the viability of the payment system, the partners wanted to make sure it was legitimate.

“I was the first skeptic,” Polatol admits. “Obviously we didn’t want to introduce something that was going to turn people off.”

Said Perrier, “I know the people who created this platform and their history. They are involved in many other reputable platforms and businesses.”

Another factor in offering credit card use involves keeping the consumer experience quick and simple.

“The ability to use a credit card makes purchasing cannabis more accessible to consumers,” Perrier said noting that using a debit card to buy cannabis is different than other debit card purchases.

For example, if a customer wants to use their debit card to make a purchase of $95.17, they take the equivalent of an ATM withdrawal through the dispensary’s system. Because it is an ATM withdrawal, they would round up to $100 to pay for their purchase and then receive the difference in cash. The customer must also pay a $3.50 transaction fee for using their debit card.

“We see a lot of head-scratching from first time customers,” Perrier said. “We’re hoping that using credit cards will make it a more straightforward and quick transaction.”

To make the same $95.17 purchase with a credit card, the clerk will ask for the person’s mobile phone number and send them a link. The purchaser inputs their credit card information and receives acknowledgement of the purchase along with the dispensary. Added to the purchase is a 6% transaction fee to cover fees charged by the credit card company and the third-party platform. Customers can open an account with Dreamer to simplify the process. Using Apple Pay or Google Pay also requires fewer clicks to make a purchase.

“The transaction gets processed on a parallel channel and stays off the credit card networks,” Polatol said. “The purchase data is then forwarded to the credit card company from the third party, which keeps it all legal.”

Dreamer is the first cannabis dispensary in Massachusetts to accept payment by credit card. Perrier said there are a few similar efforts at other ventures across the state, but they are simply downloadable apps that tie into the person’s bank account and function like a debit card.

“All those apps really do is help the person avoid the $3.50 transaction fee,” Perrier said, adding that a debit account is only as viable as the funds that are available in it. “If you try to buy something on Wednesday and your paycheck doesn’t land in your account until Thursday, that money is not available to you until then.”

Offering the option of charging a purchase on a credit card brings huge potential for increasing business. Allowable limits of purchase still apply, of course. In Massachusetts, consumers may purchase up to one ounce of “flower,” which is the plant form of cannabis, or five grams of concentrate per day.

“We’re hoping it’s a win-win,” Perrier said. “Obviously it can boost our sales and we hope it makes purchasing cannabis easier for people.”

Ultimately, Perrier said, credit cards are part of evolving their business and staying ahead of the curve.

Meanwhile, he and Polatol have several projects on the horizon that promise to bring more innovation to the cannabis industry in Western Mass.

The first project involves the partners opening a dispensary at the former Sierra Grill restaurant in Northampton featuring products from the Honey Brand, a California-based company that makes cannabis oils that can be vaped or consumed as edibles.

Perrier and Polatol have also purchased a former Western Mass Electric Company building in Easthampton that they are converting into a canning facility for cannabis seltzer.

Finally, the two are close to unveiling a cannabis-delivery business that would allow customers to order cannabis from an app, pay for it online and have the purchase delivered to their door.

Perrier summed up their activity by joking, “If you don’t innovate, you die.”

Right now, the partners are educating the skeptics and naysayers who come into Dreamer and can’t believe credit card transactions are both safe and legal.

Perrier expects people to have questions, because it’s such a different concept for the cannabis business.

“As the first ones to offer credit cards, we have to educate the consumer,” Perrier said. “I think credit cards will be widely accepted in the coming years, but for now we just want to make it available for our customers as another way to pay for their purchases.”

In the long-term Perrier would like to see cannabis purchases become as routine as a trip to the liquor store.

“No one thinks twice about charging a liquor store purchase on a credit card,” he said adding that credit card acceptance makes it possible for cannabis purchases to eventually become more normalized and mainstream.