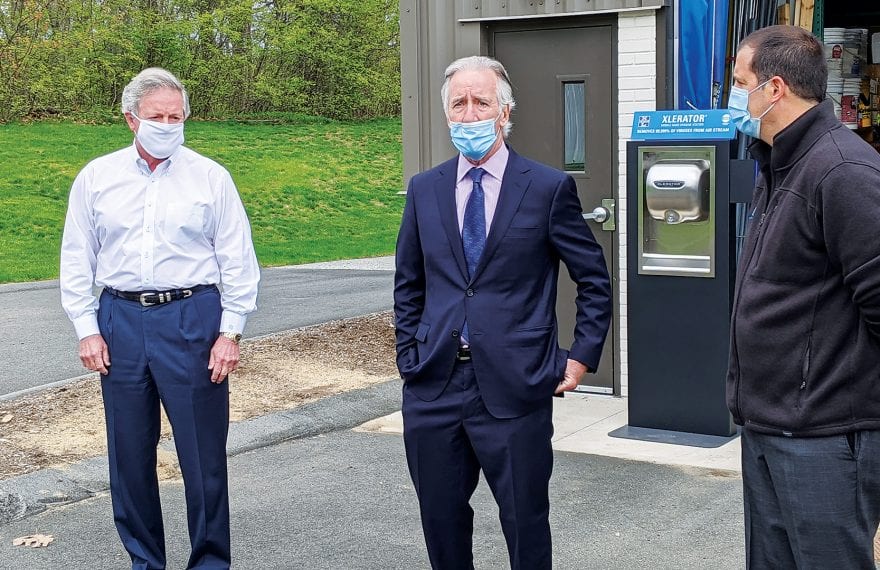 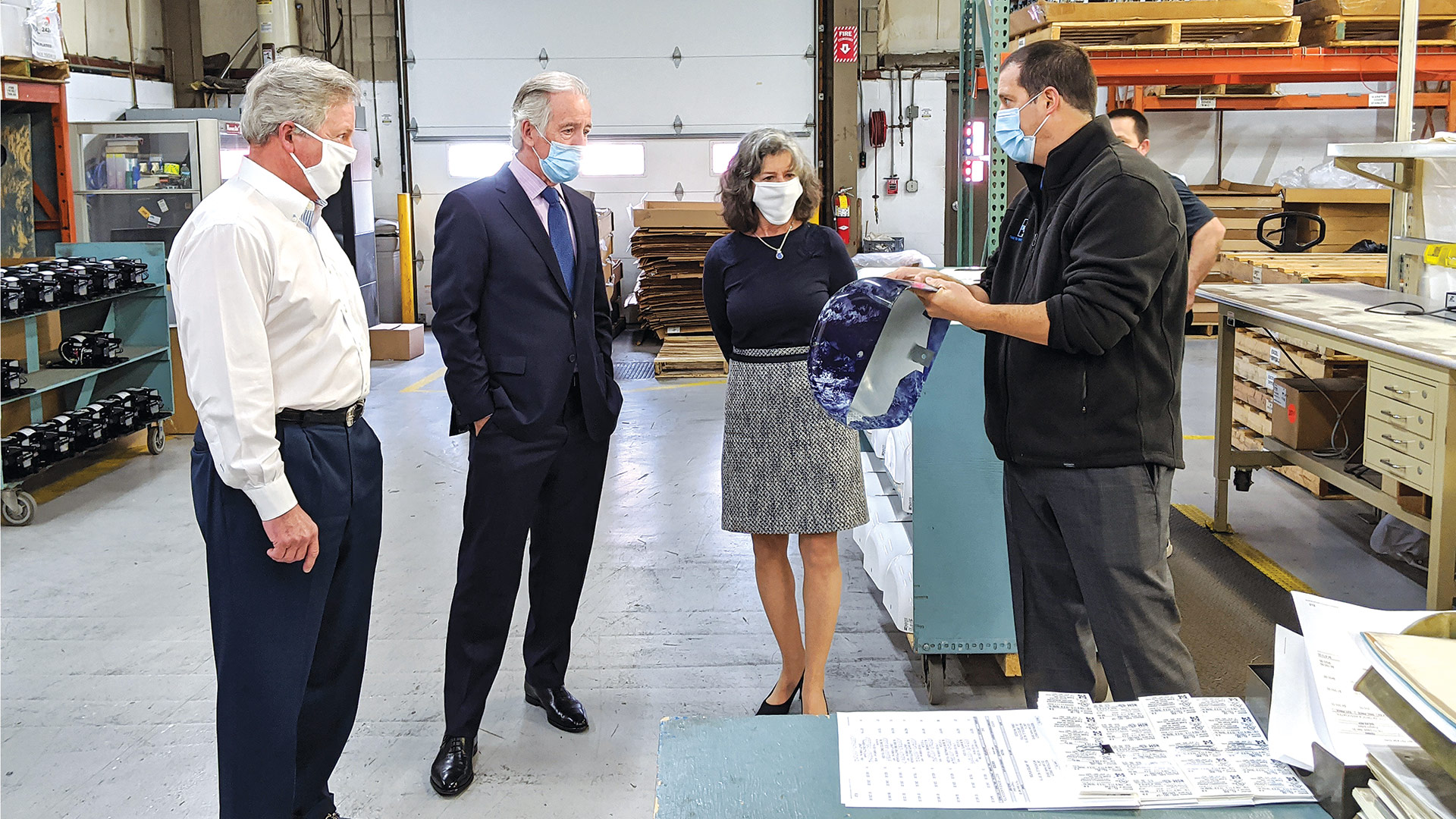 When it comes to the XLERATOR, his company’s signature hand dryer, filtration is nothing new, Bill Gagnon said.

“We’ve had an optional HEPA filtration system in it for years,” said Gagnon, vice president of Excel Dryer in East Longmeadow. “The typical HEPA filtration test you do is performed with bacteria, and it’s to particle sizes of .3 microns or larger. That’s standard in the industry. We’ve done that test; we already had it.”

But coronavirus isn’t bacterial, as its name makes clear. And its typical particle size is around 120 nanometers, or 0.12 microns — much smaller than the bacterial particles the filter had already been tested for.

“When we heard about coronavirus, we wanted to get ahead of this and wanted to test our product and its effectiveness against viruses, so we sent our product to our testing laboratory partner in Minnesota and said we want to do a virus-specific test,” Gagnon explained, adding that the lab put some 380 million virus particles through the system, “and basically zero came out the other end.”

Well, not exactly zero, but pretty darn close; the dryer’s filter lets through about one in 100,000 particles.

“This test shows our HEPA filtration system can filter [the virus] out of the airstream and gives the public assurance that it’s safe to use hand dryers — because it is,” Gagnon told BusinessWest. “Hand dryers are a hygienic way to dry your hands. This was something we wanted to test for — something we thought was important.” 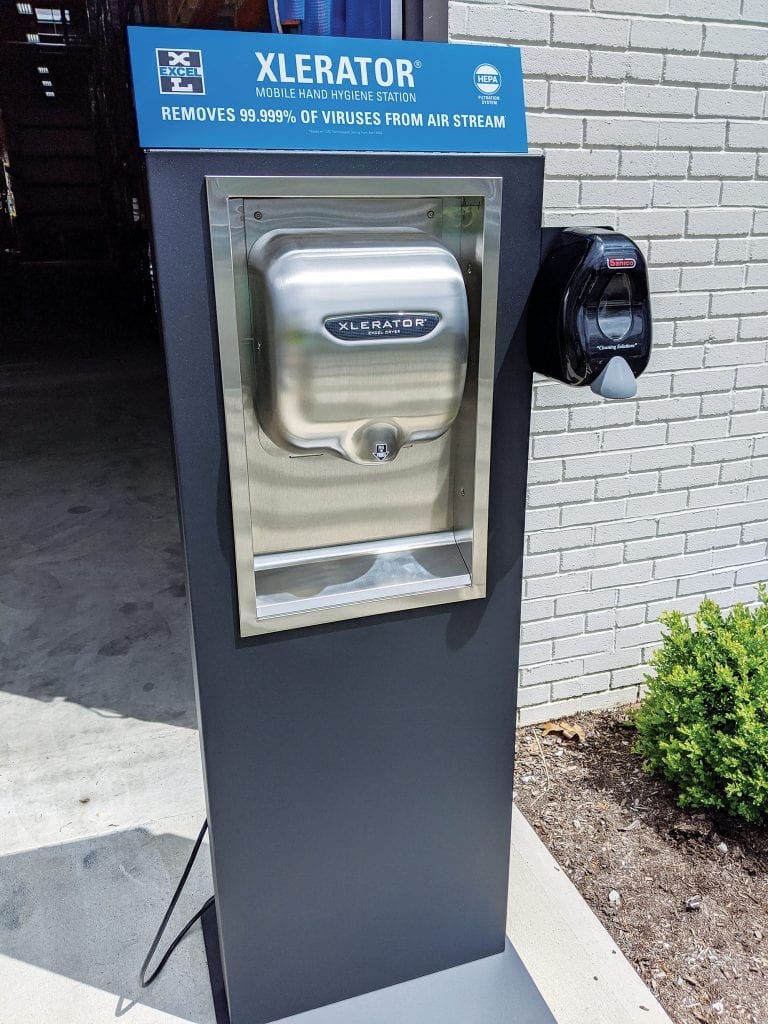 One of the mobile units being delivered to the front lines of the COVID-19 fight.

On May 6, Excel Dryer hosted U.S. Rep. Richard Neal and local media to tour the company’s manufacturing facility and tout the XLERATOR’s virus-filtration capabilities — and an ongoing donation of 100 units, with HEPA filtration systems, to first responders and COVID-19 testing sites across the state.

“Talk about innovation and creativity — they established it,” Neal said of Gagnon and his father, Excel President Denis Gagnon, who invented the popular XLERATOR. “These are 52 domestic manufacturing jobs to compete with supply chains all over the world. If we’ve learned one lesson from a pandemic, it’s that relying on other parts of the world for our products and supplies is not a great idea.”

Neal and his aide, William Tranghese, were involved in early discussions establishing Excel Dryer as an essential manufacturer in Massachusetts, making hand dryers that play a critical role in achieving proper hand hygiene. After all, thoroughly washing and completely drying hands are listed as the top defense against the spread of germs — including the novel coronavirus, which causes COVID-19 — by both the World Health Organization and the Centers for Disease Control and Prevention.

“Proper hand hygiene isn’t just washing your hands, it’s completely drying your hands,” Denis Gagnon said following the factory tour. “When we originally added the HEPA filter as an option to the XLERATOR, we tested for bacteria. Because of the COVID outbreak, we retested the HEPA filter for its ability to filter viruses, and it literally filters 99.999% of viruses. So I think there’s going to be healthy demand for HEPA-filter XLERATORs going forward.”

Neal — who, like the Gagnons, Excel’s employees, and guests, wore a face mask during his visit to the plant — touted hand washing as well, and said it’s among the now-common practices, including social distancing, that are flattening the viral curve in Massachusetts.

“The CDC and the WHO have all talked about the notion of hand hygiene, how important it is. I think we’ve seen in Massachusetts the curve beginning to bend,” the congressman noted. “The stabilization — and a little bit of a decline — have had much to do with, I think, adhering to the recommendations of professional health people.”

He particularly praised Dr. Anthony Fauci, director of the National Institute of Allergy and Infectious Diseases, as “the most reliable voice in America” on coronavirus and related matters. “Whenever I’ve received an invitation over these years in Washington to an event where he was the speaker, I went to hear what he had to say.”

As for the COVID-19 progression, “there is some good news, but there is a ways to go,” Neal went on. “Hot spots seem to be declining in the larger urban areas, but they seem to be moving to new places. So while we have better news in Boston, New York, and even here in Western Massachusetts, other areas of the country are likely to go through the outbreak that we’ve all witnessed here.”

And if Excel can play a part in slowing the spread, all the better, Denis Gagnon said.

“We very much pride ourselves on making our product here in the United States,” he noted. “It didn’t take the inconvenience of disrupted supply chains to bring it back. We never wanted it to leave in the first place. As far as being a good corporate citizen, it’s in our blood. We’re happy to help in any way we can. This was kind of an impromptu solution, and I think it’s going to help on the front lines.”

Indeed, the 100 donated units are already being shipped out, Bill Gagnon said, to police and fire facilities, testing sites, and places like the first-responder recovery center being operated by the Hampden County Sheriff’s Office.

“If they test positive, they don’t want to bring it home, so they get quality food and bedding and a place to get healthy and stay away from their families,” he explained. “We’re donating units there. We’re just trying to find out where they’ll make the biggest impact.”

While the HEPA filters on the dryers are not new, the mobile units are. They came out of a conversation the Gagnons had with Neal and his staff about whether Excel’s work is considered essential.

“In that conversation, I was talking about getting mobile units out to the front lines,” Bill said, explaining that the company’s stainless-steel supplier had built a wall to show off the product in a trade show booth. “They said, ‘we can re-engineer that to be mobile, and we can get this thing out in the field.’ Two days later, the prototype was created, and they drove it up here and dropped it off — it was amazing. Two weeks later, we had the first units being used out in the field.

“So it was an amazing new product innovation,” he continued, “and we were working with the congressman’s office and just trying to figure out, how can we help? How can we get this virus-filtering hand-hygiene solution into these facilities? And now it’s here, and there’s a lot of interest in it, and we think it can make a big difference.”

“When we heard about coronavirus, we wanted to get ahead of this and wanted to test our product and its effectiveness against viruses, so we sent our product to our testing laboratory partner in Minnesota and said we want to do a virus-specific test.”

After all, he explained, while experts like the CDC and Fauci tout proper hand hygiene as the best defense against the spread of germs, it’s important to not forget the role of complete drying as well.

“Everyone talks about washing your hands for 20 seconds, but nobody talks about drying your hands,” Bill said. “You have to completely dry them. Wet hands are 1,000 times more susceptible to pick up or transfer germs. Drying hands is critical.”

So are Excel’s operations, even in the midst of an economic shutdown, he added.

“We were in the same situation of a lot of other small businesses; when the federal guidelines came out and it was up to the states to put out their guidances, there were a lot of general categories” for what constitutes an essential service during the pandemic, he explained.

Excel seemed to fit multiple categories, Bill told BusinessWest; not only is hygiene important during a viral outbreak, but the company has contracts with the federal government to supply its product, which can boost a company’s chances to be deemed essential.

“There’s critical manufacturing, but for us, we’re such a niche market, no one calls out hand dryers specifically,” he went on. “But we felt like we fit under multiple categories, and that’s why we reached out to Congressman Neal’s office. We wanted to do everything we could to make sure we we’re doing the right thing, and they helped us with that. And when the state of Massachusetts put out their second round, a revision to the essential-services list, hygiene actually had its own category … and we’re certainly a critical part of that. So, yes, absolutely, we’re essential.”

And part of a mobile hand-drying solution that promises to reduce the spread of infection, Neal said. “There are simple things we can do in life to get through this, and they are going to be very important to us going forward.”