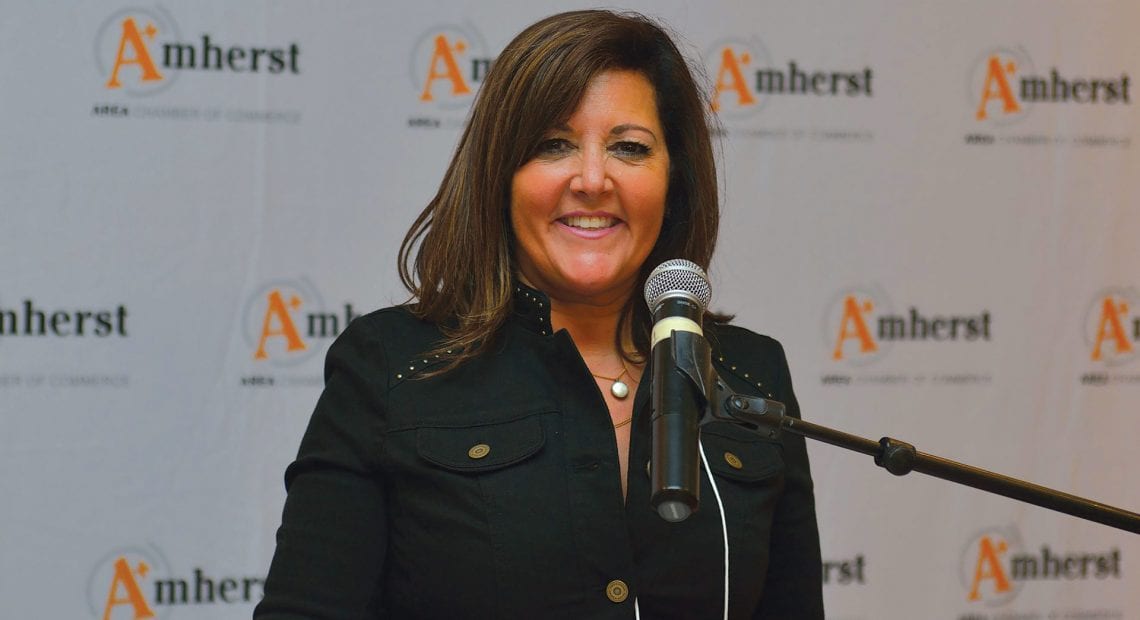 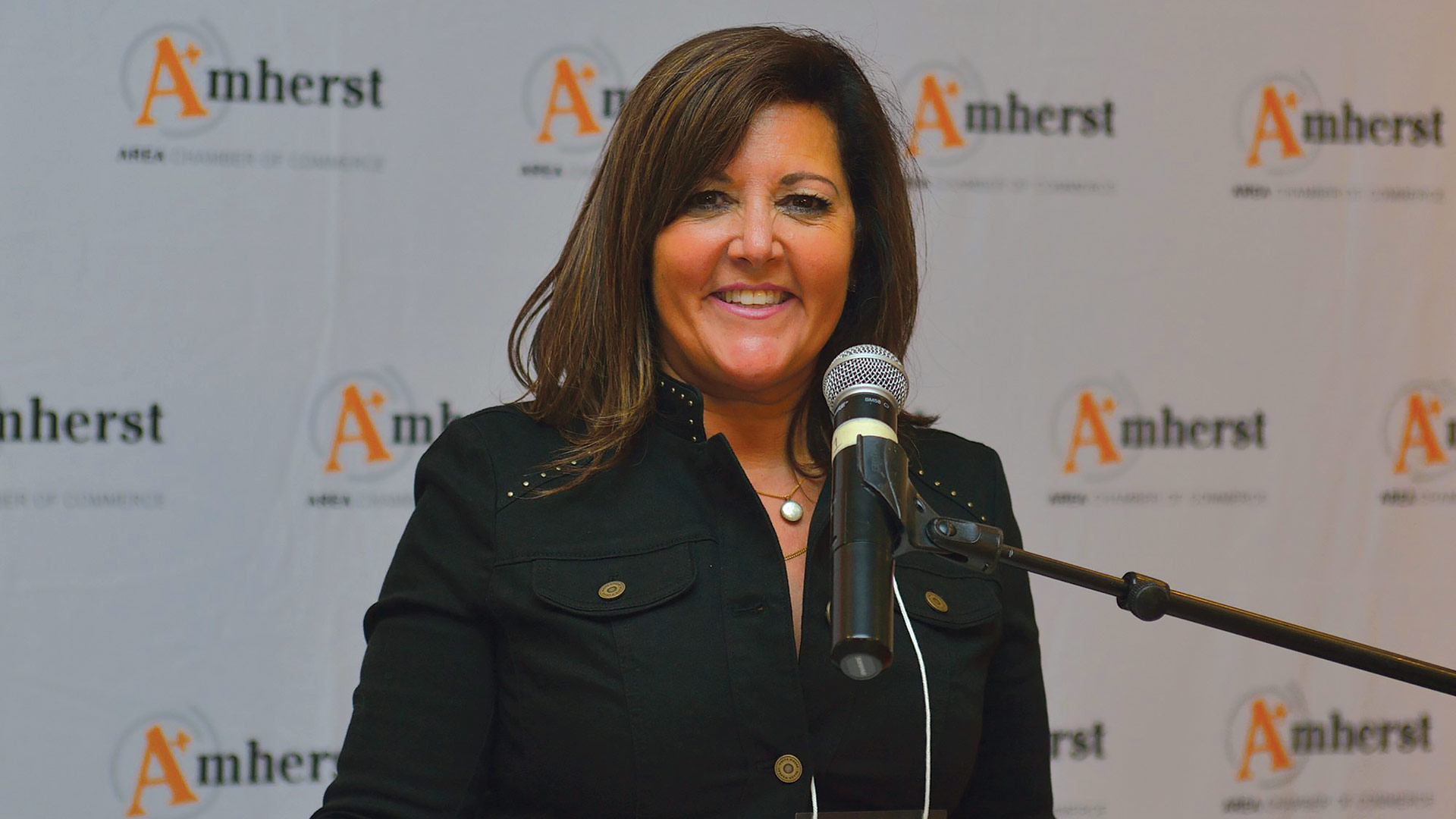 Claudia Pazmany says the Amherst Area Chamber of Commerce and the Amherst Downtown BID have found many ways to partner to raise the town’s profile.

“In general, BIDs and chambers aren’t always symbiotic, but we have found a way to really bridge that,” said Claudia Pazmany, the chamber’s executive director.

Gabrielle Gould, executive director of the BID, agreed. “We’ve been working very closely with the chamber; it’s been great bouncing a lot of ideas off each other,” she said. “I think both the BID and the chamber have this approach that a rising tide lifts all shops. We want the Amherst area to thrive and succeed.”

Gould, who came on board the BID five months ago, said part of her focus has been heavily marketing a buy-local, shop-local, eat-local philosophy, and it’s bearing results. For example, a ‘red-ticket’ month held during the holidays, in which shoppers got a red ticket for each $25 spent downtown, which went into a drawing for cash prizes, generated about $500,000. “That’s money that stays local instead of going to the big-box stores.”

The BID is also conducting conversations with residents and businesses about zoning and development — particularly targeting those who generally oppose any change.

“We’re getting some developers together with some community members who are anti-development, where developers are saying, ‘look, I’m fourth-generation Amherst. I’m not the boogeyman. I’m not looking to build a high-rise,’” she explained. “Let’s stop talking about what we hate, let’s stop talking about what’s already been built, and let’s start working together to make a vibrant and dynamic downtown. And without some redevelopment, that’s not going to happen. We need retail stores. We need restaurants.”

Beyond that, the BID has formed a new Foundation for Downtown Amherst, looking to create a 501(c)(3) with a mission to boost the downtown through arts and culture development and promotion. Goals include building a parking garage and working with architects and engineers to create a permanent performing-arts shell on the common.

“Amherst has slipped a bit — we’ve become a drive-through town, and we’ve lost some retail — and to drive traffic back to our downtown, we need density, but we also need things that people will travel to town for.”

Gould hopes to raise sufficient funds to endow the latter project, maintain it, and program it for two years with free performances, ranging from local high-school plays and concerts to touring musicians and theater and dance companies. Another idea is to commission a piece of sculpture that would become a recognized landmark in Amherst and beyond.

“My take on downtown is, if you bring in more art and culture, the retail and restaurants will follow, because we’re going to drive people to Amherst,” she told BusinessWest.

“This should be a destination. In all four seasons of the year, we have a lot to offer. Amherst has slipped a bit — we’ve become a drive-through town, and we’ve lost some retail — and to drive traffic back to our downtown, we need density, but we also need things that people will travel to town for. Our job is to support the businesses that are here and help in bring new businesses and more visitors.”

Meanwhile on Jan. 22, the Amherst Area Chamber of Commerce released its 2020 Vision report, which seeks to activate:

• Community impact, by developing new and deeper opportunities to create partnerships and increase exposure for the chamber’s 65 nonprofit members;

• Transformative tourism outreach, by creating opportunities to highlight the creative economy and redefine the Amherst area as a destination;

• Workforce development, by bolstering educational and training programs, supporting other regional educational offerings, and connecting job seekers to jobs and transportation; and, conversely, working to address barriers to employment for chamber members;

• Advocacy, through the creation of a government affairs and policy advocacy committee to create programs and forums vital to members and bring forward key issues that support economic development through direct communication with lawmakers and key stakeholders; and

“Everything is driven by conversations with people who walk through the door — maybe an alum from one of the colleges, maybe someone who’s retiring here,” Pazmany said. “They’re here because it’s a destination with huge, untapped potential, and we have to get that word out.”

Take the town’s position as a dining destination, she noted. “Downtown Amherst has everything — you can explore the world through dining downtown, and because it’s a college town, the prices are right.”

The plan to take advantage of that is twofold, both she and Gould said — better marketing of what’s already downtown, especially to those outside the region, and bringing in more of it.

Economic efforts involve regional thinking as well, Pazmany added, noting that Amherst businesses have often felt that Route 9 development in Hadley was a deterrent to their success, while, in fact, an improving regional profile benefits everyone. Amherst, she said, can take advantage of that regional attention while honing its own strengths.

“People really love the community feel here. It’s a walkable downtown, with pretty much everything at your fingertips,” she told BusinessWest, adding that people want to feel like they’re part of something bigger, and that’s something a thriving downtown district can provide.

“We have arts and culture and a lot of venues that offer music,” she went on, adding that museums like the Mead, the Carle, and the Yiddish Book Center offer an additional cultural backdrop in town, while the Amherst Cinema drives plenty of programming downtown. That’s why it’s important to take that strength and grow it further, she noted, as a way to both keep residents living here and cultivate a tourism economy.

One other advantage for the chamber, Pazmany said, is its connection to UMass Amherst, which has deepened by reaching out to Gregory Thomas, executive director of the Berthiaume Center for Entrepreneurship to discuss strategies for harnessing the significant entrepreneurial energy being generated on campus and keeping it local.

That takes physical development, and some creativity, she noted, as the town isn’t home to swaths of large, unused buildings like in Holyoke and Easthampton — and, as Gould noted, not everyone in town is high on new development.

But she would like to see an influx of new businesses that cater equally to residents and the 35,000 college students who live in town most of the year, from grocery stores to a men’s clothing shop to a place to buy bedding and furniture.

“We’re looking out there and saying, ‘what is going to benefit all of us?’ In terms of bringing in retailers, we need buildings to put them in. A lot of pieces need to fall into place, but we’re heading in the right direction.”

In her few months on the job, Gould has been asking businesses, ‘what do you need?’

“They all say, ‘we need more businesses,’” she went on, and that’s not always an easy sell to residents, especially long-established ones. “There’s excitement here, but also a lot of fear when you mention development, when you mention building, when you mention ‘new.’ When you start talking to them, it’s very fear-based.

“So how do we take the big, bad boogeyman out of the closet and decide what Amherst really needs?” she asked. “If we don’t, we’re not going to see growth and positive change. We might lose more retail and restaurants. And we don’t want that — we want more people to come in.” 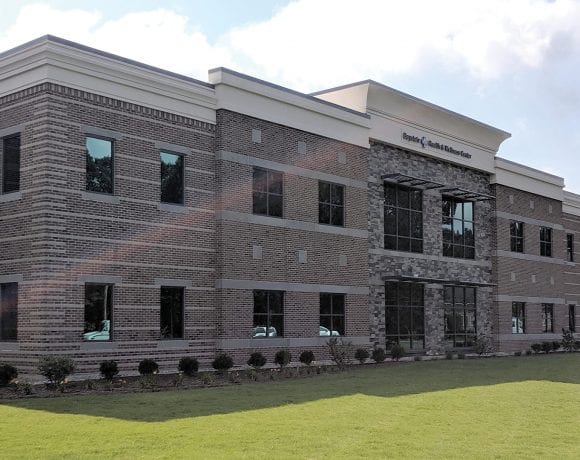