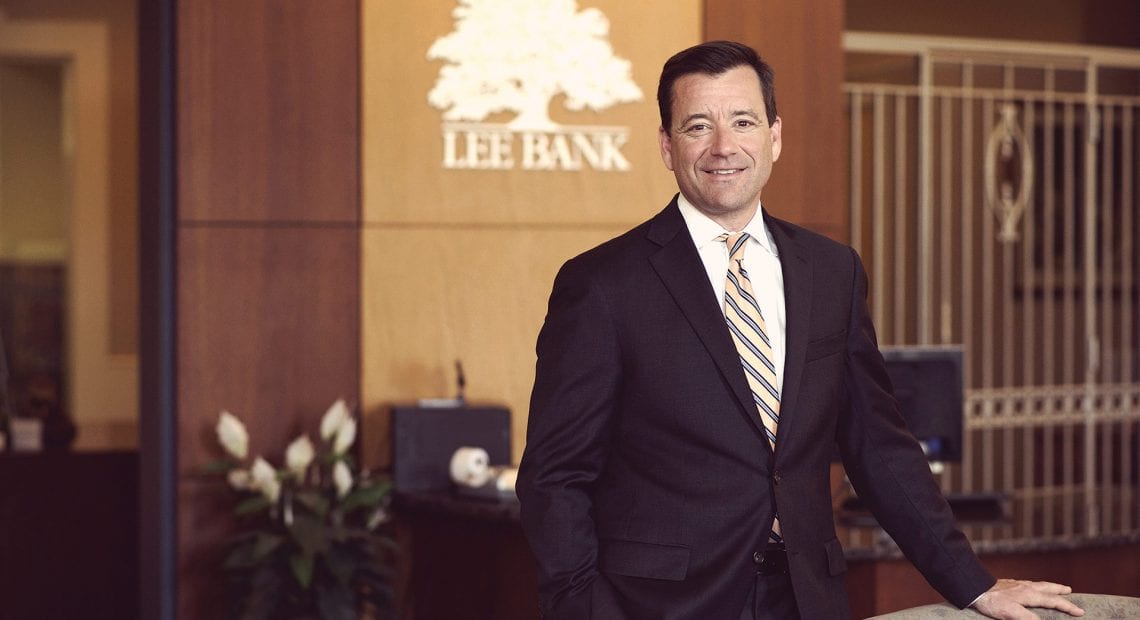 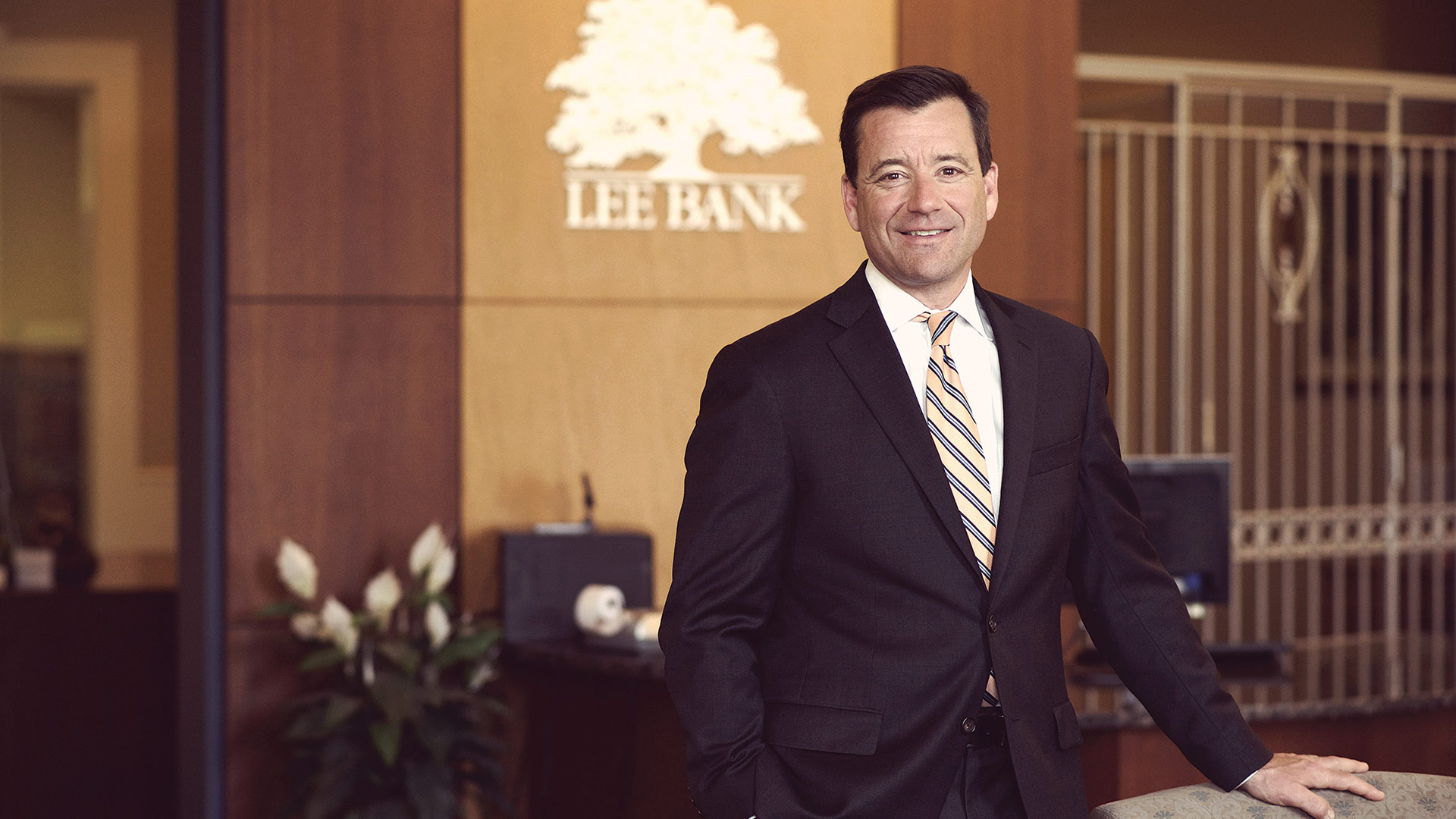 “It’s just good business for us — Main Street lending, that’s where we can have a nice give and take with customers. It’s kind of our wheelhouse.”

That’s all still true, even though 2020 has rocked that wheelhouse in unexpected ways.

“We’re not seeing the same commercial demand,” said Leach, president and CEO of Lee Bank. “It’s either risk aversion or businesses are waiting to see what happens.”

Or, in some cases, they’re extra liquid after taking advantage of the Paycheck Protection Program (PPP) and other stimulus measures, as well as deferring payments on other bank loans, he added. “Put all that together, and they may not have borrowing needs right now, or they’re sitting on their liquidity until they see some clarity with the pandemic or the election or both.”

Clarity has been in short supply since the COVID-19 pandemic forced a widespread economic shutdown at the start of spring that continues to wreak havoc.

Michael Oleksak remembers the first few months of the year, of hearing occasional news about the novel coronavirus back in January, and much more of it as February crept along.

“I’d been asking myself for years, ‘what are we missing? What’s next?’ Because there had to be a ‘next.’ Who would have thought it would be a pandemic?”

“Then, from mid-March into April, everything was a blur. It just spiraled,” said Oleksak, executive vice president, senior lender, and chief credit officer for PeoplesBank, before discussing the PPP surge and other measures that followed (more on that later).

Blurring the picture further was the very uncertainty of what was coming. Having experienced several economic upheavals, from the bank failures of the early ’90s to the bursting of the dot-com bubble in 2000 and 2001, to the housing crisis in 2007 and 2008, he had no idea what the next crisis would be.

“I’d been asking myself for years, ‘what are we missing? What’s next?’ Because there had to be a ‘next.’ Who would have thought it would be a pandemic?

“This will be the fourth economic cycle I’ve been through, and every one has been different,” he added. “And this one is far different than the others. We’re not seeing a lot of new activity. I think everyone is kind of hunkered down, for lack of a better word, in survival mode.”

As Allen Miles, executive vice president at Westfield Bank, put it, “obviously this one was a lot different. You couldn’t see the train wreck coming; that’s the best way to explain it. It just got dropped on us.”

What happened next in commercial lending is an oft-told story recently, but one worth telling again. What will happen next … well, no one really knows. But banks will certainly take lessons from a challenging past seven months as that story takes shape.

Miles said Westfield Bank started reaching out to loan customers in February when coronavirus became a more widely reported issue. In mid-March, like other banks, it was actively sending employees home. And then the storm hit.

From mid-March into the start of April, “that two weeks was absolutely crazy because you had people looking for loan deferrals, and the bank examiners were very friendly to both the banks and borrowers to try to help these people out,” he recalled. “We were just trying to help our customers. You’re not worried about loan origination; you’re just worried about getting people through the unknown and the craziness.” 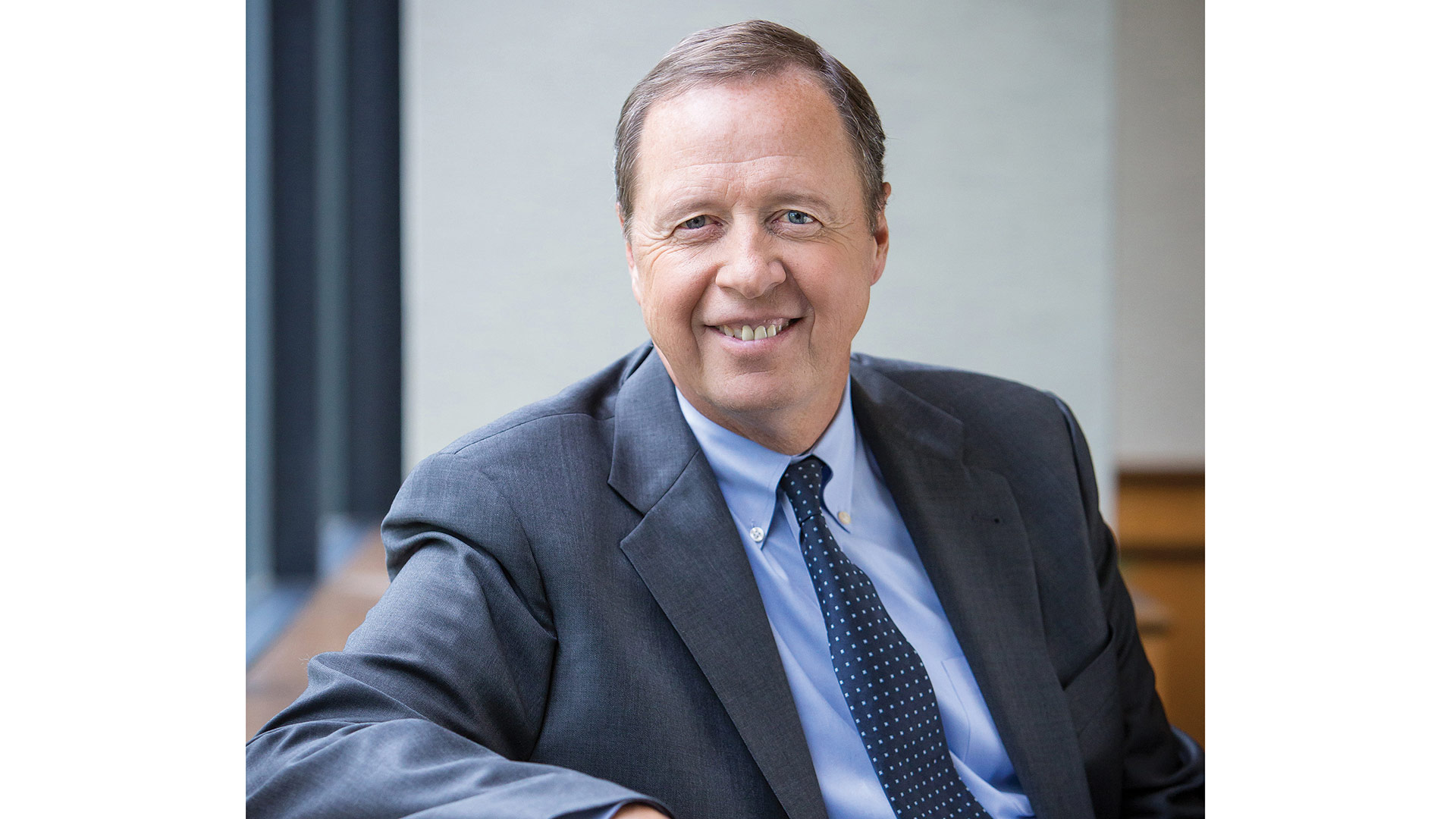 Michael Oleksak says new lending activity has been down because many businesses are “in survival mode.”

The first Monday in April, the bank received about 500 PPP applications, and about the same number the next day.

“We needed to get all hands on deck,” Miles told BusinessWest. “We were still waiting on guidance from regulators and the Treasury Department. We had people afraid for their livelihoods, their families, and everything. It was organized chaos.”

The bank got $185 million in PPP loans approved in that first round, what he called a “herculean task.” The second round, several weeks later, was much less chaotic. “That was more for the smaller businesses — a lot more applications, but smaller in dollar size. We were able to keep up with those because we’d been through it, and they weren’t as complicated.”

Oleksak said the PPP was a critical lifeline for a lot of people. “There was kind of a mass panic there wouldn’t be a round two, which put a lot of pressure on the banks and our customers, trying to rush to get them into a program that was not very well-defined from the outset,” he recalled. “Then round two came along, and everyone who needed funds was able to access them, and that made a big difference.”

Leach said the widely reported chaos was quite real, but the larger story was a positive one.

“In spite of the controversy, and the people who thought they were making up the rules as they went along, I think the PPP was very functional,” he said. “We’re seeing a lot of customers well-capitalized right now, which is the untold story nationally.

“Maybe that changes and this is just a Band-Aid,” he added, due to the lack of clarity about the next few months, from fears of a second COVID-19 surge to the limbo status of further federal stimulus. “But, for now, this has put a lot of capital in the banks and a lot of capital in businesses in our region and beyond. A lot of our customers are in good shape right now.”

Again, borrowers want clarity. Still, Leach came back to the positive impact his bank was able to make with the PPP — and also with loan-payment deferrals for about 240 customers, with about $60 million deferred in total. “In a bank that has $400 million in total assets, you can see that’s a good chunk,” he said, adding that only a fraction of those customers requested a second deferral period.

Oleksak and Miles both reported similar trends, with requests for continued deferrals dropping after the first 90-day period.

“Thirty days before the first deferment was up, we contacted people, and 85% to 90% said, ‘we’re good, we’re not going to be looking for a deferral going forward.’ So that made us feel really comfortable,” Miles said. “With the PPP and the deferrals, it bridged the gap for customers.”

“We’re being very sensitive,” added Kevin O’Connor, Westfield Bank’s executive vice president and chief banking officer. “We’ve been very involved with them, understanding their needs and how the bank can work with them.”

While borrowers in the broad hospitality sector continue to struggle, for obvious reasons, most customers have come through the past seven months well with the help of PPP and loan-payment deferrals, Miles added. “The main ones hurting are the ones being affected by the phases and the rollouts — restaurants, bars. They’ll take a while to get back on their feet.”

That’s true in the Berkshires as well, Leach said, and restaurants in particular are worried about the onset of cold weather and an inability to seat more customers, due to both the state’s indoor-capacity restrictions and the reluctance among some patrons to eat inside restaurants right now.

But the region’s hospitality businesses have benefited in others ways during the pandemic; in fact, one bed-and-breakfast he spoke with did record business this summer. 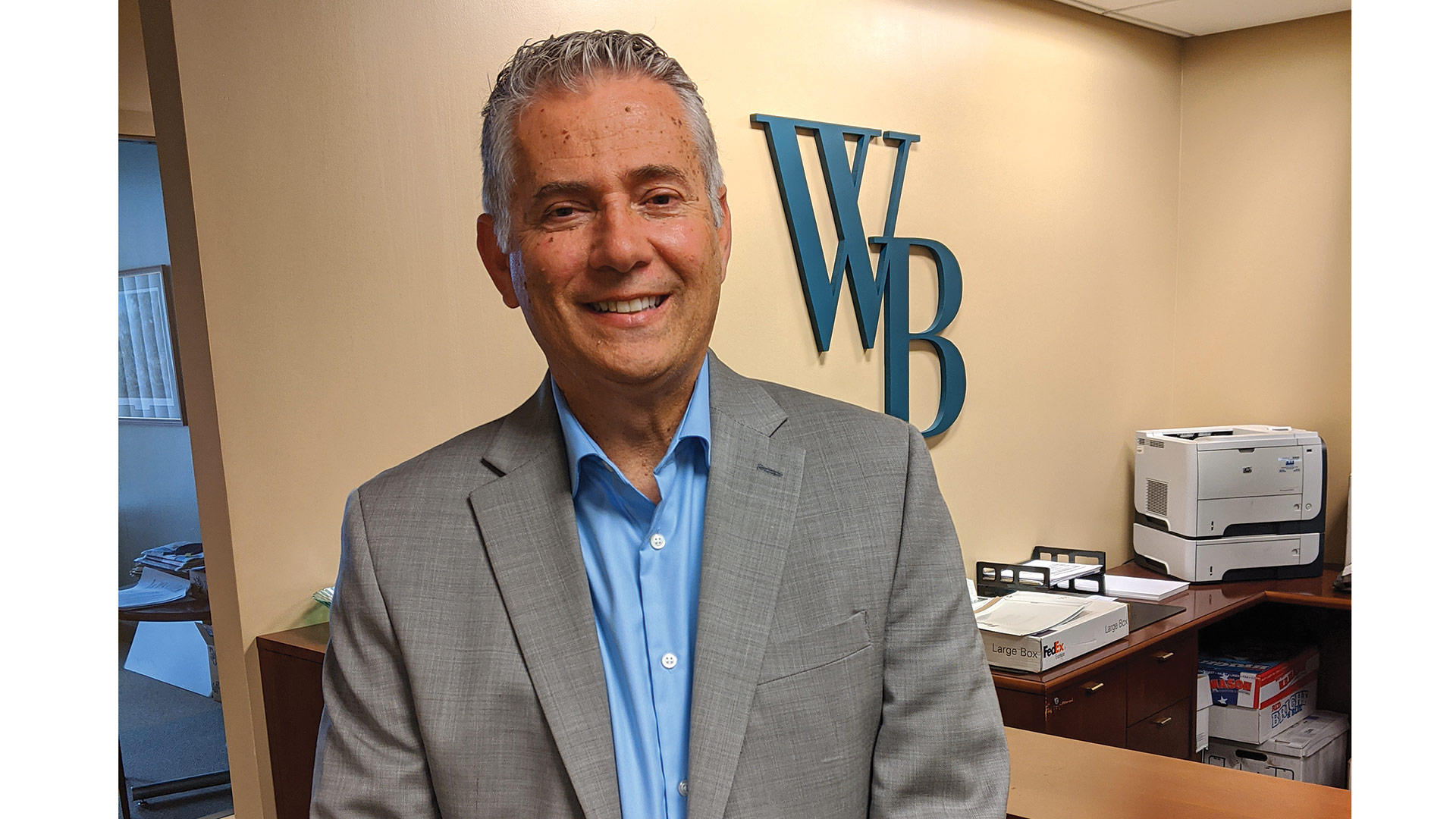 Allen Miles says some loan customers are doing well, while others, particularly in hospitality, continue to struggle.

“People left urban areas for a safer place, whether for weekends or longer,” he said, adding that some secondary homes became primary homes, while other people bought first homes in an area they felt was safer than, say, New York City. “Interest rates are obviously really low, but there’s also the fear factor of ‘wait, I’ve got to get out of this urban area.’ So there’s been a huge sense of urgency to buy in an area like the Berkshires.”

“The deferments and PPP money actually made some people stronger because it’s been cash preservation instead of cash burn,” he noted. “Usually for commercial lending, it starts getting busy after Labor Day. We weren’t sure if we were going to see that cycle again, but now it’s quite busy, and people are active. So that’s a really good sign.”

That activity is strong across the board, particularly in commercial real estate, where customers are refinancing for a lower rate or selling, he explained. “It’s a great time to sell — low interest rates, lower cap rates, people are going to pay you more for the property — so you’re seeing a lot of transactions going on right now.”

Commercial and industrial (C&I) loans are healthy as well, he said, adding, of course, that, “with anything related to hospitality or travel, the jury’s still out on that. The longer this [pandemic] hangs over us, the longer the recovery for them.”

At PeoplesBank, Oleksak said, many customers have been accumulating cash and paying down lines of credit, or shopping around to lock in better long-term rates on loans, which is a challenge for banks already facing flattened yield curves. “I think the depth of the crisis is a little bit masked by the amount of stimulus money in the market, from PPP, SBA programs, and deferments.

“The deferments and PPP money actually made some people stronger because it’s been cash preservation instead of cash burn.”

“Some individuals out there are suffering mightily, particularly restaurants and hospitality,” he added. “The other great unknown is, we don’t have a vaccine yet. Are we going to see another spike? People are trying to get back to normal here, but I’m not sure what the new normal is going to look like.”

He pointed to his own institution as an example. Between half and two-thirds of PeoplesBank employees are still working remotely, a trend being reflected across all geographic regions and business sectors.

As a result, “nobody really knows what’s going to happen with the office segment of the market, with so many people working from home. Will they go back at some point? Will companies decide they don’t need so much space, or does social distancing mean you have fewer people but still need more space? It’s a total unknown for us.”

It’s unfortunate that some industries, like restaurants, will likely see a slower return to health, O’Connor said, “but it’s good to see customer confidence in some areas coming back, even a little bit sooner than we would have expected.”

Miles agreed. “We’re very happy with what we’re seeing right now. It’s not behind us, but it’s not as bad as people anticipated. If activity is picking up and people are borrowing, they’re confident, which is good.”

Country Bank Expands Its Presence in More Ways Than One 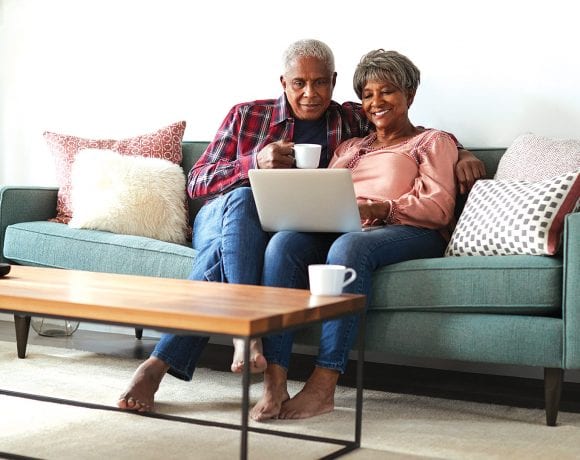