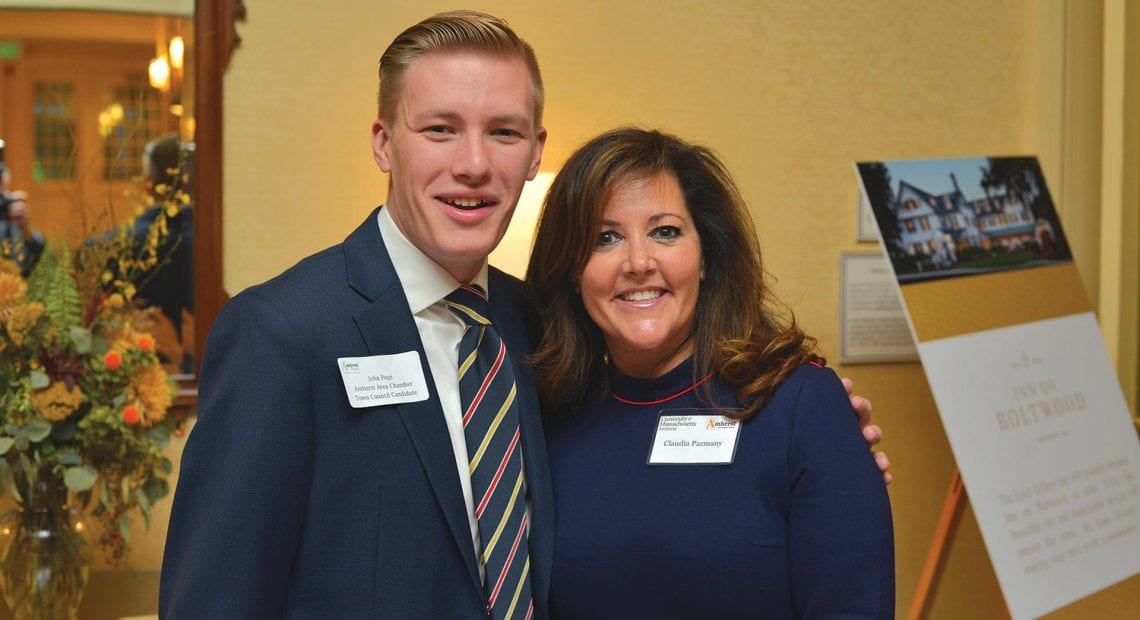 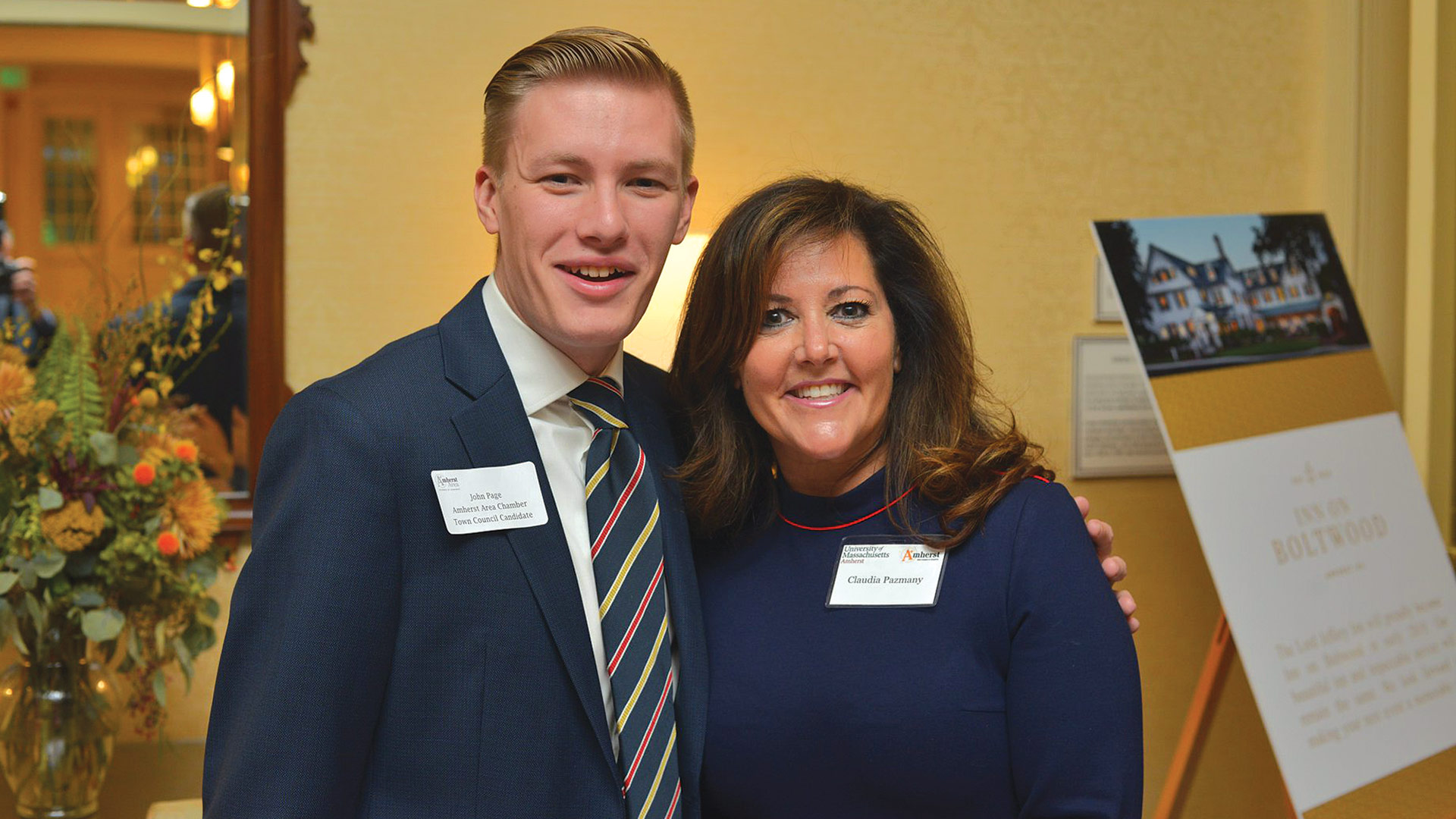 John Page and Claudia Pazmany say the chamber has stepped up its role this year in many ways to help businesses, including those in Hadley.

Before the pandemic, up to 80,000 cars would travel on Route 9 in Hadley each day, bringing workers, students, and customers to and through the town.

Known for its agriculture, proximity to the Five College community, and a robust retail corridor along Route 9, Hadley has been challenged, like all towns, since the arrival of COVID-19. But efforts by a group of town officials are meeting those challenges to keep Hadley viable today and well into the future.

David Nixon, deputy town administrator, said area colleges play an important role in the local economy. Hadley’s location is central to the Five College community, but Nixon actually sees it as a 30-campus community because that’s how many colleges are within an hour’s drive of Hadley.

While some campuses are open, others have stayed closed, and some are taking a hybrid approach, mixing on-site classes with distance learning.

“This has had an impact on local businesses,” he said, noting that less activity at the colleges, most notably UMass Amherst, which borders Hadley, adds to the struggles many businesses are facing as they try to comply with pandemic restrictions and stay afloat. “Right now, we are doing as much as possible to keep people safe and to support our businesses.”

Hadley officials have reduced licensing fees and expedited the process for businesses that are adapting to state COVID-19 guidelines. For example, when restaurants had to amend their food and liquor license permits to allow outdoor service, Nixon said the town was quick to respond to get the changes made.

“We’ve also expedited the inspections that are necessary when a business changes the footprint of their building,” he added, noting that cooperation among the town’s Planning Board, building inspectors, Fire Department, and Select Board ensured an easier process for the businesses involved.

Hadley is also one of seven communities benefiting from a $900,000 Community Development Block Grant to help microbusinesses stay afloat during the pandemic. Easthampton is the lead community on the grant, which allows businesses with five or fewer employees to apply for up to $10,000 in grant money. 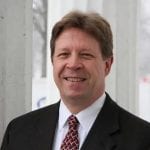 “This project is also an opportunity to replace 100-year old sewer and water pipelines under Route 9. By doing this all at once, it will save taxpayers a lot of money.”

Also pitching in to help businesses is the Amherst Area Chamber of Commerce, which covers Hadley and other surrounding towns. Claudia Pazmany, executive director of the chamber, said the area has been fortunate in that the number of COVID-19 cases is lower than most parts of the state. To keep it that way, the chamber is now providing PPE, as well as printed posters and floor decals, that reinforce messages of social distancing, mask wearing, and hand washing. Available at no charge to chamber members, the signage is just one of the ways to help businesses get back on their feet.

“These are not business-saving techniques by themselves, but we hope to help our members reduce their costs as they open back up under the new guidelines,” she told BusinessWest.

The chamber has stepped up its role during the pandemic in other ways as well. “Our ability to advocate for and to market our businesses has become even stronger since COVID-19,” Pazmany noted, adding that it’s one of the few “silver linings” of these times.

The town and the chamber have been working together on a series of Zoom meetings with local businesses to hear their concerns and offer whatever help they can, she said. “We’ve been hosting these meetings to keep an open conversation between the town and businesses.”

One of the popular topics in the meetings has been the widening of Route 9, which is expected to start next year. The $26 million project will add travel and turning lanes to the road.

“This project is also an opportunity to replace 100-year old sewer and water pipelines under Route 9,” Nixon said. “By doing this all at once, it will save taxpayers a lot of money.”

Pazmany said the Route 9 widening has been in the planning phase for years, and once complete, the improvements will benefit all who use the roadway.

“Many people use the bus to go to work and school. Among other things, the widening project will provide much safer bus stops and allow buses to get more people moving in an efficient manner.”

The widening project will begin at Town Hall and go east for 2.6 miles to the intersection of Route 9 and Maple Street.

Business owners located along Route 9 have expressed concerns about the loss of business due to COVID-19 being followed up by a loss of business due to road construction. To alleviate that concern, the town has applied for an economic-development grant to market the Route 9 corridor. John Page, the chamber’s marketing and membership manager, said the idea is to position Route 9 as a great place to open a business.

“The grant would be about marketing and planning the future of Route 9 post-COVID,” he explained. “Hopefully, that’s coming sooner rather than later.”

As plans for the future of the town come into focus, Pazmany reminded everyone that Hadley has a great deal to offer right now.

“For those looking for a day trip, this is the time to come and visit,” she said, adding that, with the arrival of autumn, “Hadley will be at its most beautiful and picturesque in the next few weeks.”

She noted that many local restaurants participate in farm-to-table efforts with Hadley farms supplying many of the vegetables.

And, as more people take part in outdoor activities, the Norwottuck Rail Trail bike path has seen more riders than ever before, she said. The path runs completely through Hadley and features scenic views of farms and neighborhoods.

Nixon said the rail trail gives people another perspective on his town. “I often talk about the view of Hadley from Route 9 and the view from the bike path. They look like two completely different communities.”

Two out of three building projects started last year in Hadley have been completed. The new Senior Center is complete and providing remote programs for residents. The new fire substation is also up and running, and the town library is close to completion.

As someone who has been involved in municipal governments for more than 30 years, Brennan’s experience ranges from working with councils on aging in Amherst, Hampden, and East Longmeadow. She remains active as a selectman in Wilbraham, where she lives. Back when Brennan was a student at UMass, she lived in Hadley and worked at the Shady Lawn Rest Home.

Brennan said she’s glad to be back and described Hadley as being in great shape thanks to the town employees and Nixon’s management. “Having worked in other municipalities, I’m impressed with the all of the employees; they are real stakeholders in their community.”

She also appreciates having Nixon work with her while she gets acclimated to the job. “With David staying on until the end of the year, you couldn’t ask for a better transition plan for the town and for me.”

As for Nixon, he reflected on his career with Hadley and spoke of how rewarding it was to serve the town for 15 years.

“I’ll definitely miss the people,” he said. “I’m glad I was part of advancing our community a little further down the road.”