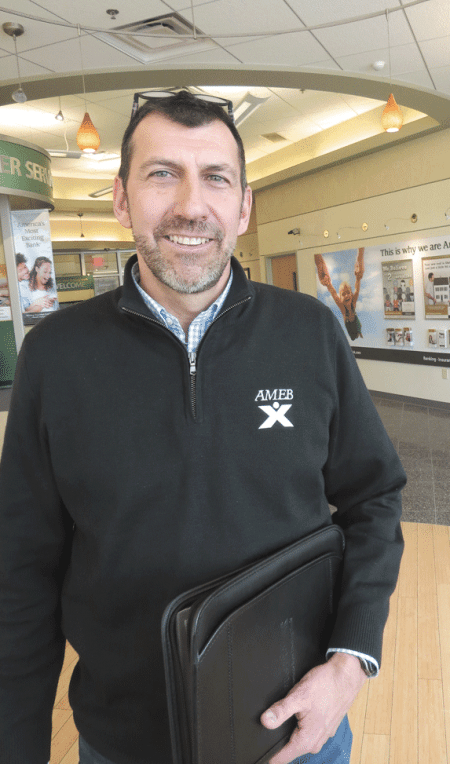 Through organic growth and a series of acquisitions, Berkshire Bank has achieved the kind of size ($9 billion in assets at present) that is necessary to succeed in the challenging climate within this industry. But Springfield Regional President Jim Hickson says it blends this size with a small-bank feel and “attitude,” and this is why it has been able to improve its share of the local market.

Jim Hickson says the conference room at Berkshire Bank’s main Springfield offices have become a popular spot lately, seeing far more visitation than would be considered normal — in large part because the bank is certainly encouraging it.

The reason is the room’s windows, which feature northerly and easterly exposures and, more specifically, stunning views of the construction work going on at MGM Springfield, just a few dozen feet away in some cases. Indeed, the massive, 2,000-car parking garage now looms over that conference room — Hickson commented several times on how quickly the structure went up — and the windows at the north end provide views of much of the rest of the construction site.

What visitors obviously see is a casino taking shape, said Hickson, senior vice president and commercial regional president for the Pioneer Valley and Connecticut. What he sees — and what others probably see as well — is what the casino represents: regional momentum and additional growth opportunities, which could come in a number of forms, from large corporations coming to Springfield, like CRRC, to smaller businesses that may take advantage of what will be a growing need for services.

“Those cranes that you see … they translate into momentum for the region; it’s a very exciting time,” said Hickson, adding that he believes Berkshire Bank, a.k.a. America’s Most Exciting Bank (or AMEB, as is written on his zip-front fleece jacket), is very well-positioned to take advantage of the momentum that can now be seen out those conference-room windows, and also in some of the other offices in the bank’s large suite at 1259 Columbus Ave.

That’s because the Pittsfield-based institution has the requisite size — achieved through several acquisitions, including that of Springfield-based Hampden Bank early last year — to be a major player, but it doesn’t act like the proverbial ‘big bank’ you read and hear so much about.

“We have big-bank resources, but with small-bank attention and approach,” he said, adding that, while this might sound like a line from the marketing department, it accurately conveys what goes on across what is now a huge Berkshire footprint, covering much of the Northeast, as we’ll see later.

And also in those offices on East Columbus Avenue, which comprise a regional headquarters, said Hickson, meaning that customers can avail themselves of a full slate of services, including commercial lending, residential lending, cash management, investment services, private banking, and more.

This combination of large-bank resources and small-bank attitude has enabled the bank to significantly grow its market share in the Greater Springfield area across the board, and especially in the highly competitive commercial-lending realm, said Hickson, adding that a variety of factors are spurring activity among area business owners.

“For the first few years after the recession, even up to three or four years ago, no one was really borrowing money; instead, people were paying down their lines of credit and getting rid of debt,” he explained. “But in recent years, many of our customers are finally saying, ‘I do need to invest in that piece of equipment’ or ‘I do need to put an addition on my building.’ People have been saying, ‘maybe we are finally out of this.’”

To effectively capitalize on these sentiments and this movement, banks need to be large, but also versatile, flexible, and ‘local,’ meaning local decision making, not simply lenders with phone numbers starting with ‘413,’ said Hickson, adding that he believes Berkshire is all those things, and thus well-positioned for what might come.

For this issue and its focus on banking and financial services, BusinessWest talked at length with Hickson about what can be seen out those conference-room windows, and how AMEB is poised to be at the forefront of it all — in every sense of that word.

As he talked with BusinessWest about the bank, its recent pattern of growth, its growing presence in Greater Springfield, and its large-bank-with-a-small-bank feel, Hickson referred early and often to one ongoing project that underscores seemingly all of the above. 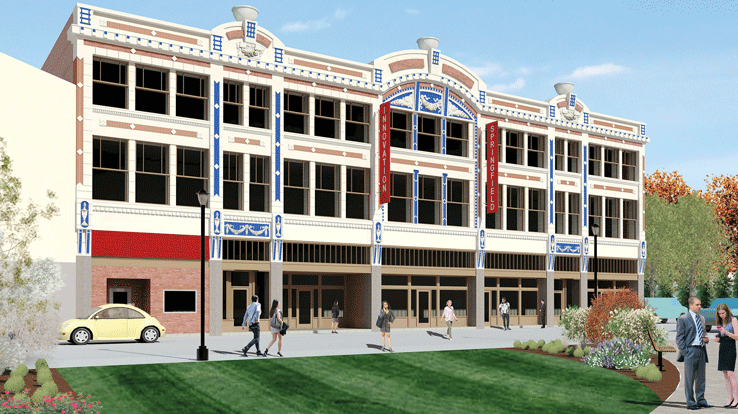 Jim Hickson says Berkshire Bank’s involvement with the Springfield Innovation Center is an example of its commitment to the region.

That would be the construction of Springfield’s new Innovation Center on Bridge Street in two buildings acquired by DevelopSpringfield. The $2.7 million project represents a collaborative effort involving a number of partners, including the city, the state, DevelopSpringfield, Valley Venture Mentors, MassDevelopment, the Innovation Hub, and MassMutual. Funding is being provided by the state, through a MassWorks Infrastructure Program grant to MassDevelopment, MassMutual, the Beveridge Foundation, and the Berkshire Bank Foundation.

The bank itself is in the process of underwriting a construction loan to DevelopSpringfield for the renovation work and completion of the innovation center project, said Hickson, adding that final approval is expected within the next several days.

“It’s projects like this that exemplify that we’re here to serve everyone and have a vested interest in Springfield and this region,” he explained. “This a big project in the revitalization of Springfield, and we’re excited to be a part of it.”

Thus, as mentioned, that project checks many boxes when it comes to the bank’s operating philosophy and its goals for being a big part of the progress represented by the view out the back of the company’s offices on East Columbus Avenue.

Hickson arrived there — or back there, to be more precise — last October when he was named to his current post. Indeed, included in his nearly three decades of experience within the banking industry is a stint with Berkshire as senior vice president and asset-based lending relationship manager.

He’s also had tours of duty with People’s United, TD Bank, KPMG Consulting, and Fleet Capital. He is also chairman of the board for Common Capital.

With those accumulated business cards, he’s certainly had a front-row seat from which to witness an era of profound change in the local banking scene, with many new brands ariving, some old ones disappearing from the landscape, and a host of mergers and acquisitions.

Berkshire has been a part of that, he acknowledged, adding that the Pittsfield institution has greatly expanded its footprint in recent years. It now extends all the way from Syracuse, N.Y. in the western corner of the Empire State to Boston — a territory that includes three state capitals (Albany and Hartford are the others). And with the acquisition of New Jersey-based First Choice Bank, it now extends all the way to Philadelphia.

In the current banking climate, size brings a number of advantages — from larger lending limits to all-important economies of scale when it comes to operations in the face of rising technology costs and regulatory burdens — and Berkshire now possesses $9 billion in assets, 96 branches, more than $6.5 billion in loans, $6.6 billion in deposits, and $1.4 billion in wealth assets under management. Such growth has come organically, but also through those acquisitions, the latest of which involved First Choice, a $1.1 billion institution.

The Hampden Bank acquisition, completed in 2015, effectively doubled Berkshire’s presence in the Greater Springfield area, giving it 18 branches, while also doubling its commercial-lending portfolio within the region, said Hickson, adding that this strategic initiative is a good example of how the bank doesn’t simply grow for growth’s sake.

“That acquisition was a key development for the bank; Berkshire has always viewed the Pioneer Valley as a key strategic market,” he explained. “The bank’s not looking to grow to be the biggest in town; it’s looking for key strategic opportunities that fit our core values, and this acquisition was one of them.”

Hickson said he doesn’t have to look out the conference-room window to know there is more activity in the commercial lending realm these days. He can see it in his office and with everything he sees as a member of the bank’s executive loan committee.

“The economy is better, and with a better economy comes more loan opportunities,” he said while summing up the landscape before getting into more specifics. “It may not be new entrants into the market, but maybe existing companies looking to grow either by diversifying into another product line or acquiring another company in the business sector they’re in.”

As one example, he cited the region’s large core of precision-manufacturing companies (one of Berkshire’s stronger specific niches), many of which are investing in new equipment, expanding facilities or building new ones, and diversifying product lines, largely as a result of greater confidence in the economy.

The next wave, he predicts, with both precision manufacturers and the local business community in general, will come in the form of mergers and acquisitions as smaller firms owned by retiring Baby Boomers face inevitable succession-planning issues.

“There are ways to finance those kinds of transactions,” he explained. “And we obviously want to keep as many of those firms local as we can.”

In the meantime, there is that increased optimism and subsequent lending activity that he mentioned earlier, adding that, to take advantage of it, banks need versatility and the ability to both develop specific niches and be generalists, said Hickson, adding, again, that Berkshire possesses such traits and skills, while some of the larger institutions don’t.

“As banks get bigger, they tend to lose sight of the local community they serve,” he explained, adding that Berkshire hasn’t done that, as evidenced by the Innovation Center and countless others in the portfolio.

This would include the large number of Small Business Assoc.-assisted loans the bank has participated in over the years.

“We’ve been very successful with SBA loans,” he explained, adding that this statement applies to this region, certainly, but also to the wide Berkshire footprint. Indeed, the institution has been top-rated in this realm by the SBA in several of the regions it serves, including the Pioneer Valley, Connecticut, and the Syracuse area.

“We’re very proud of that distinction — the SBA’s a great way to finance things, and we’re a big supporter of the agency,” he went on, adding that the SBA currently ranks the bank among the 100 most active in the country with such loans, with more than 110 transactions totaling more than $21.9 million.

However, those SBA loans are just a tiny fraction of the total portfolio, he went on, adding that, with the size generated by the acquisitions in recent years, Berkshire can make loans of all sizes and serve virtually every customer within the region’s business community, but with a small-bank approach.

Rising from his chair, Hickson gestured out the conference-room windows and admired the view he and his staff regularly invite visitors to share.

“It’s such a beehive of activity; it’s exciting to take it all in every day and watch things progress,” he said. “It’s mesmerizing.”

He was talking about the MGM project, obviously, but he may as well have been referring to the region’s economy as a whole, although it is probably not worthy of such superlatives — yet.

But those cranes do translate into momentum and, hopefully, more progress and growth for area businesses. And Hickson believes AMEB is ready to be right in the middle of it all, just as it is in the South End.