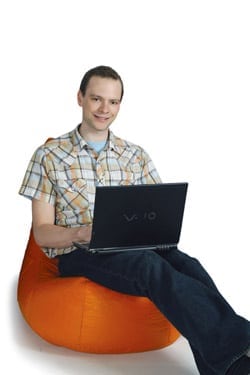 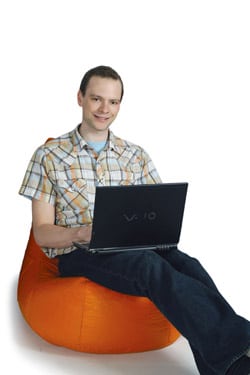 When he’s not running his software development firm, Atalasoft, in Easthampton, which is growing at an astounding rate of 75% annually, he’s working to recruit technology talent to Western Mass. through his involvement with the Regional Technology Corp. He’s also a prolific blogger at BillBither.com, and encourages the practice among his employees.

But Bither isn’t always chained to his keyboard; he’s also a competitive cyclist who commutes to work by bike, and celebrates a healthy lifestyle within his company, too; Atalasoft’s team meetings are often held in motion on nearby bike paths.

“Sometimes I need to come up for air,” he joked, adding quickly that any down moments are usually spent with his family — his wife Kim and two children, Abriana and Alex. “I just love them, and having two young children to play with is a blast.”

Bither moved to Western Mass. after graduating from Rensselaer Polytechnic Institute with a degree in Electrical Engineering. He started his career at Hamilton Standard, but as a side project began developing a software application called EyeBatch, which processes several images at one time, often for use on the Web.

He said EyeBatch began to generate a nice side income, which in turn motivated him to start his own business. Now, Atalasoft sells six core products worldwide and employs 15 people. Bither expects that number will be closer to 100 in just a few years.

“That’s all organic growth — we hire people as we need them,” he said.

The fast pace at which Atalasoft is evolving has also allowed Bither to make philanthropy a major part of his business. After losing his father to brain cancer, he and his family became involved with BrainTrust, a nonprofit organization focused on improving the quality of life of those with brain-related conditions. To give back, Bither donates 100% of the profits of EyeBatch to the group.

“They offered my family a lot of help, and BrainTrust is a small charity, so it really benefits,” he said.
And, it’s just one more way Bither stays busy — a business owner, bicyclist, blogger, and now, benefactor, as well.