G Brougham and D Albertson say that, with the slowdown in Belchertown residential development, attention can focus again on their towns next steps.

Doug Albertson says he can finally take a breath.

After close to two decades of rapid residential growth in Belchertown, the nations sagging economy slowed the pace of further expansion for one of the fastest-growing municipalities in the Commonwealth. And a break, while it brings hardship to several sectors  from homebuilders to home sellers  was probably needed.

A town with a rich history, Belchertown was first settled in 1731, and retains much the same boundaries where Jonathan Belcher first took deed in the early part of that century. The October town fair is one of the oldest of its kind continuously operated in the nation, and the creation of the Quabbin Reservoir, mostly within those borders, is one of the Bay States most documented municipal projects of the 20th century.

These days, Belchertown is most noted for that once-enviable pace of robust residential development, what Town Administrator Gary Brougham calls the towns single largest industry. But the community has been in the headlines for the past few years over the fate of the former Belchertown State School.

While the town has been active in seeking ideas for the property, there have been some setbacks. It has contended with both a developer whose ideas were bigger than his checkbook, and a site with millions of dollars in overdue cleanup costs presenting more than a minor challenge for any potential development.

But town leaders remain confident. The Belchertown Economic Development & Industrial Corp. is managing oversight of the state school property, and it is getting ready to propose some new findings to the Board of Selectmen this month. Thats when the rubber really hits the road,  said EDIC chair Bill Terry.

In the latest in its ongoing series of community profiles, BusinessWest takes an indepth look at Belchertown  past, present, and (potential) future.

Despite such an influx of new residents, Albertson said that what the community lacks is density.

We are 50 square miles  thats one of the largest geographical towns in the state, he said. If you look at the core of the town, out of the towns 15,000 people, Belchertowns center has maybe half that. Everybody else is closer to Amherst, Ware, Palmer, and Ludlow.

What that translates to is a bit of a challenge for a homegrown business district. Belchertowns center is an historic village green, but it lacks the presence of a commercial destination. Instead, business districts are pocketed in areas on Routes 9 and 202.

In terms of new growth, were always trying to attract new business, said Albertson. But one of the challenges we have here is zoning. We dont have a lot of land that is zoned for business, and changing that can be difficult. Once a residential neighborhood is established, people dont like the idea that business can show up in their neighborhood. Everybody wants new business in town, but they want it over there. And there really isnt any there here.

Jim Phaneuf agrees. Hes the owner of Bell & Hudson Insurance, a business that can trace its roots back to the Civil War. For 23 years he has been located close to the downtown area, but doesnt find the widely spread population to be a drawback.

Its a rural economy, sure, he said. For the people who live here, though, my sense is that people want to do their business locally. They tend to make a strong effort.

One reason I think is that the business community does a great job of supporting local causes, he continued. If you look in our weekly paper, you see thank-you notes to the local businesses for supporting things at the high school, or local fund drives to donate money to cancer research. I dont think that a week goes by where you dont see a letter of some kind like that.

Brougham said the towns business population might not be highly visible for the outside visitor, but it is there, and strong.

Theres a pretty equal mix of small mom-and-pop shops and larger businesses, he said. Two lumber companies, Northeast Treaters and Universal Forest Products, are both significant employers in town, and the construction sector, the way it is, hit them hard. But they are still in good shape. Another manufacturer of construction materials, National Fiber, is also holding its ground.

With the residential boom in Belchertown, that construction sector has been an important facet to the towns economy. And when turmoil hit Wall Street, it also hit Belchertowns Main Street.

The builders, tradesmen, landscapers, Realtors, bankers, lawyers, everyone has a stake in construction here, said Brougham. But that pace has slowed significantly.

From more than 100 or more housing starts per year we were down to 13 last year and 12 as of Aug. 1 this year, he said, adding that, with such a slowdown in activity, the time is perfect for people wanting to make a move.

There is still activity out there, he said. A new subdivision was recently approved, and theres a multiple-year backlog of available property. Lots that had been selling for $160,000 could be had for much less today.

For Albertson, the focus on town development in the residential market isnt a drawback at all. Weve been growing at a manageable pace, really, and financially were sound. That might be one of the advantages of having a primarily residential tax base. People complain about it all the time, but when businesses suffer, we arent stuck with a lot of empty properties.

The 70-plus acres of the former Belchertown State School have been a concern since Beacon Hill decommissioned the facility in 1992.

Currently zoned for light industrial use, the property had a brief flicker of hope when a developer sought to bring a large-scale resort spa and wellness-related businesses to the site. The concept, though supported in principle, never got off the ground. Albertson credits the EDIC with solid vision, and said it has been great at focusing on what can be done there.

We got a grant under Mass State Law 43D, he continued, which states that a town can designate an area a priority development, and we received $100,000. Looking at the site, weve hired the engineering firm Fuss & ONeill to do site and conceptual planning. Theres been a marketing firm, RKG Associates, to do a feasibility analysis to find out where the market is, and to get a realistic and sober view of what we have there.

So, instead of casting a line out and seeing where it blows, he continued, its a much better way of looking at our site objectively, and looking at what our assets and disadvantages are.

Cleanup at the site has proven to be a big, lingering disadvantage. Old buildings (some in terminal deterioration), asbestos, and old steam tunnels all have conspired to keep most developers at bay. While the town has succeeded in gaining approval for a $10 million bond specifically to address those conditions, the bond market hasnt hasnt been very inviting of late, and cleanup continues to wait. But the law is there, Albertson said, so once the money has been raised we should get up to that amount.

Terry is one of those people who remains confident that, when it comes to effective reuse of the site, its a matter of when, not if, it will happen. Since 2000 he has been actively seeking answers for the property. While there is the main campus of just over 70 acres, other neighboring school parcels have been successfully developed. The new Hampshire County Courthouse and Sheriffs Office, Easthampton Savings Bank, and TSC Tractor Supply Warehouse, all at the intersection of Routes 202 and 21, sit on one of those parcels.

At the selectmens meeting scheduled in September, Terry said that there are two feasibility plans that will presented. While nothing could be made official at press time, he did say that they are two solid approaches.

One of them is, as we have done since 2002, one property at a time, he explained. The second concept that I know is to consider a mixed-use type of development. However, that would require some retail/commercial-type space, and you would have to identify who would take advantage of that. Where are those customers going to come from?

Terry has some thoughts for what he believes would be successful at the property. Weve been dancing around a bit with an assisted-living developer, he said. A project with 90 units  I absolutely believe that would be a slam dunk, because all those younger people moving into town have mom and dad to think of in the near future. Sooner or later, theyll need assisted-living types of housing. Theres no reason, in my opinion, why that couldnt be successful.

Albertson also looks ahead, rather than dwelling on the past pitfalls. I think theres a lot of potential, but I think it has to be done in a way that will grow with the community. Rather than something imposed on the town, something that just shows up and buries us  do it in a way that improves the community and adds to our employment base. I think it can be done right. Its not going to happen in a year, but its already been 15, so we do want to do this right.

The New England Small Farm Institute is on the other side of the property, he continued, and we keep thinking about UMass, because an institutional connection seems to me like a perfect thing. Weve got the UMass farms and orchards already in town, and it would not be much of a stretch at all if the university had a further presence here. Its all about using the site, providing employment and activity in town without adding a lot of extra traffic.

Speaking personally, Phaneuf said that hed just like to see more jobs created in the town. We employ 14 people here (at Town Hall), and while thats small, thats a similar size for many businesses in town.

What I would like to see is a place to create jobs within the community so that people wouldnt have to leave, he continued, noting that 75% of the population currently travels out of town for work.

Devising ways to lower that number appreciably is just one of the things that town officials can do with that breathing room that comes with the lull in residential expansion.

That lull wont last forever, or even another year or two, as the economy begins to improve and developers again eye ways to develop more of this communitys wide, open spaces. Challenges like the fate of the Belchertown State School property remain, but, overall, the forecast remains bright for a community with the room  and the imagination  to keep on growing. 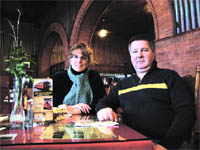