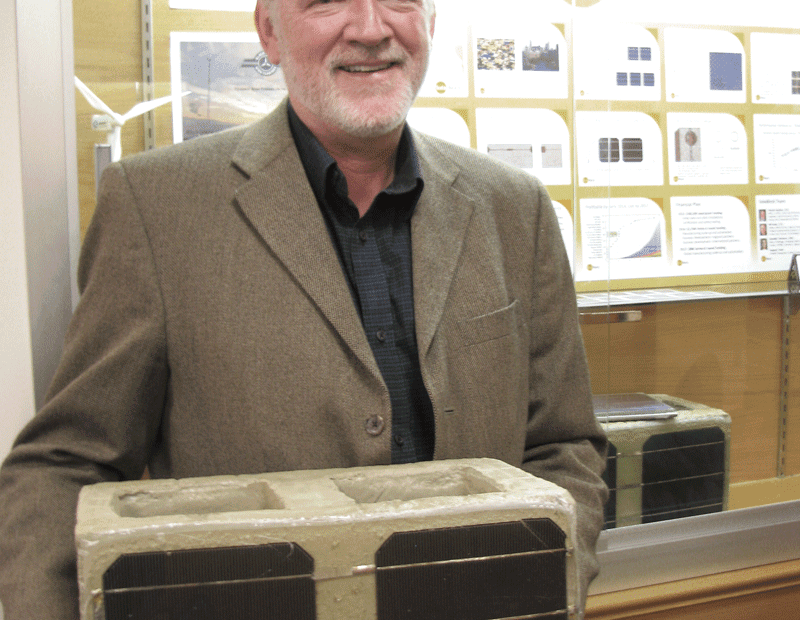 SolaBlock Wants to Drive Solar Power Up a Wall 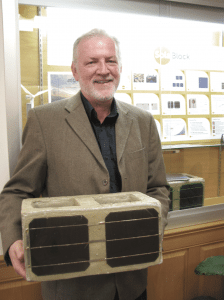 At least, not if Patrick Quinlan has anything to say about it. A longtime player on the national stage in the renewable-energy arena, he’s now developing some bright ideas in Springfield, as a tenant in the small-business incubator at the Scibelli Enterprise Center (SEC).

His latest project, SolaBlock, is a simple-enough concept: photovoltaic (PV) cells are built into cinderblocks, which are then used to build vertical walls — or laid over existing walls — where they generate energy from the sun.

“We’re so excited about all the possibilities,” Quinlan said. “I walk through the city and look up and say, ‘oh my goodness, that could all be SolaBlock.’ Or I drive down the road and see all the highway walls and say, ‘that could be SolaBlock.’” And the potential is not limited to the U.S., he noted. “We’re thinking globally.”

This summer, thanks to a $40,000 state grant (more on that later), the technology — for which Quinlan holds four patents — will be put to the test on a small building at the Springfield Technical Community College (STCC) Technical Park, which also houses the Enterprise Center.

But he’s already thinking big. Among the capabilities of SolaBlock units, Quinlan says they are expected to:

Sound walls on highways, in fact, are a particularly intriguing option, because they’re not obstructed by trees in the summertime, yet aren’t totally covered by snow in the wintertime, noted Marla Michel, SEC director. “Trees get in the way of solar, but they’ve already been cleared on highways.”

• Provide critical solar power to unattended buildings, signs, or off-grid buildings that would otherwise be susceptible to vandalism or theft. “We wanted to make it so you couldn’t steal it, couldn’t break it, and it’ll be there for the life of the building,” Quinlan said.

• Provide secure power to critical buildings or shelters that may lose grid power or conventional PV in hurricane-force winds. Quinlan noted that SolaBlock can withstand winds of above 100 mph.

• Enable substantial solar electric generation for buildings sited in complex urban settings. “We’re really interested in the notion that you could have an off-grid, completely autonomous apartment in the middle of New York City, or out in the woods, freed of needing any electricity from the grid,” he said, noting that cities can lose power on a wide scale, as Manhattan did during Hurricane Sandy. “There are a lot of reasons why people want to be green and energy-secure, even in the city.”

But the benefits don’t stop with energy conservation and access; SolaBlock can be an effective educational tool as well. “This would be great for schools, because the solar could be at ground level, and kids could walk to it,” Quinlan said, adding that the connections could be viewed indoors throughout the year.

All told, Quinlan and his partners — Jason Laverty, William Stein, and Danielle Thorburn — have high hopes for SolaBlock. To date, those hopes have been founded on untested hypotheses … but that’s about to change.

Enter the Mass. Clean Energy Center (MassCEC) and the Mass. Technology Transfer Center, which recently awarded a total of $200,000 to five Bay State entrepreneurs as part of the MassCEC Catalyst Program, which aims to fund the commercialization of new clean-energy technologies from startup companies or being spun out of established research institutions.

The $40,000 grants are intended to help early-stage researchers demonstrate the commercial viability of new clean-energy technology.

This will take place at Building 112 of the tech park, a small brick building used as a maintenance shed. The south and west walls, as well as the roof, will be covered with SolaBlock units, and meters will be installed to measure the energy production of the solar cells and compare the performance of the vertical and roof installations. An Internet connection will allow the public to read those meters and check the progress of the demo over the course of a full year. That project should go online by the fall.

“We’re grateful to the Clean Energy Center for having faith in us in Western Mass.,” Quinlan said, noting that the public often thinks of the Commonwealth’s clean-tech hub in terms of MIT and other Boston-area research institutions. “A $40,000 grant is a really big deal for us. And it’ll all be out there on the Internet for everyone to see.”

Quinlan said SolaBlock’s ‘concrete masonry units’ (CMUs) can be integrated into almost any existing wall specification, since the blocks retain their original insulation, compression, smoke, and fire-rating capabilities. And they’re economically attractive because the expensive metal frames used for both mounting traditional PV materials in a framed module and for mounting the modules to a building are eliminated. There is some additional cost of wiring from block to block, but at a fraction of the cost of the aluminum and steel needed for conventional construction.

He noted, however that the vertically placed blocks are expected to produce around two-thirds of the energy produced by a traditional, tilted PV array — hence the placement on both the walls and roof of the test building, to compare performance. However, he said, energy generation may be augmented by the placement of reflective materials (decorative white stone, for example) in front of the blocks.

Still, while vertical blocks may receive less sunlight than roof-mounted panels, SolaBlock walls can be installed over vast surface areas of a building that would not otherwise be providing electric power, therefore increasing the total energy production by the building — a key feature in achieving certification in the ever-popular Leadership in Energy and Environmental Design program administered by the U.S. Green Building Council.

“The kits have to be high-automation,” Quinlan said, noting that one building fitted with SolaBlock cells might require thousands of blocks.

To that end, Quinlan outlined a business plan in which the company assembles the PV ‘kits’ and ships them to regional partners in the form of masonry-supply companies. SolaBlock has already reached out to Chicopee Mason Supplies in this region.

“They will be manufacturing the modified blocks we’ll be using under an agreement that gives them exclusive license in the region,” he explained. “We are developing a regional distribution partnership with them to distribute the finished material.”

That example will be repeated across the country. “We’ll build all the electronics in Western Mass.,” he continued, “then we’ll ship the electrical parts to our regional contract manufacturers to combine them and sell them regionally using the same model.”

That makes sense, Michel noted, because concrete blocks are typically sold only regionally due to their weight.

“It’s uneconomical to distribute them beyond about 200 miles,” Quinlan added. “More to the point, we discovered that most of the businesses that make concrete products are longtime family businesses in their regions, and we’d rather work with them than compete with them.”

That appeals to Quinlan on a personal level.

“I have an affinity for the trades,” he said, noting that his father was a plumber, and he put himself through college working with him. “SolaBlock is a way for people in the trades to work in the clean-tech arena. It’s not just for the elite. This is basically clean tech for regular people. You build it, it’s green, and it provides energy independence.”

Quinlan, the former associate director of the UMass Wind Energy Center, has plenty of experience in the field of renewable-energy technology development. He worked as a science fellow in the U.S. Congress and as a technology fellow at the White House Office of Science and Technology Policy. He’s also a former employee of the National Renewable Energy Laboratory. “I’ve worked in energy since 1984, in both the technical and policy sides.”

For the current phase of his professional life, “instead of taking a job with someone else, I basically decided to start up new companies,” he said, adding that he wants to be a catalyst to grow the clean-tech industry in the region as a whole, and he sees the Enterprise Center as an ideal home for those efforts.

“I thought, I want to be part of that. I want Scibelli to be my home base for doing this,” he told BusinessWest, noting that, in addition to SolaBlock, he’s launched a second company, Black Island Wind Turbines.

Michel views the startup as an ideal tenant at the SEC. “The state is trying to grow this cluster both in Massachusetts and also regionally, throughout New England. The Enterprise Center has been active in supporting the regional growth of clean tech through support for companies like Pat’s.

“We’re a multi-use facility, but our vision of the tech park is really to have more support for clean tech. It’s a great place to do business,” she added. “And SolaBlock is innovating in an industry that’s hungry for innovation.”

Quinlan said the Enterprise Center has been critical to landing the kind of support — like the MassCEC grant — necessary to take the next step.

“I was drawn to this like a moth to a flame; this is the exact kind of environment I needed to have,” he told BusinessWest. “Without that, it would have been just us trying to do our best, competing with everyone else trying to get the attention of those who could help us. [Michel] has taken half the effort out of that.”

Down the road, if all goes as planned, he expects to begin looking for manufacturing space so SolaBlock can start building the kits. And Quinlan believes a huge market exists for the product — again returning to the appeal of vandal-resistant PV units in urban areas where the risk of theft has hindered consideration of conventional solar systems. Specifically, all electrical equipment of value is located behind the wall, making the systems unattractive for dismantling. Yet, individual concrete blocks can be repaired with a replacement kit.

“We can also use it for brick replacement — replacing bricks on walls,” he said. “It’s pretty weatherproof and vandal-proof. It’s not like regular solar panels where people are afraid to put them up on the chance they could be vandalized or stolen. We have utility customers who are very excited about this.”

So is Quinlan, who believes not just in his idea, but in this region.

“I’m a very strong supporter of Western Mass.,” he said. “I went to school here, and I want to live here. What I want to do is provide a means for myself and my colleagues in clean tech to have a really good quality of life and good occupations right here in the Valley — and that is very possible.”