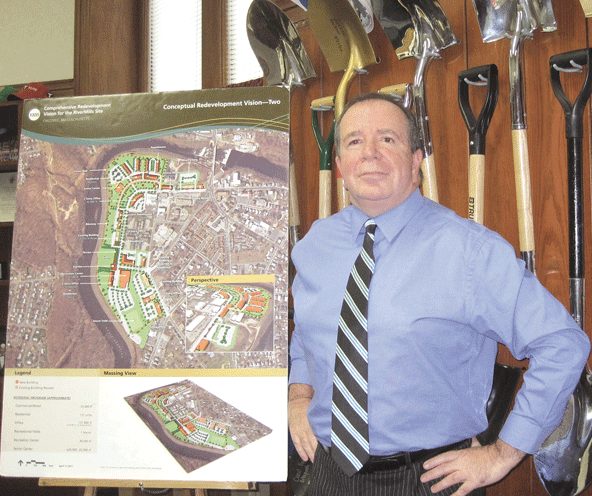 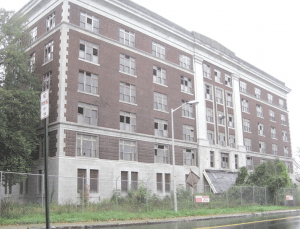 One of the buildings in the former Uniroyal complex in Chicopee.

Tom Haberlin, director of Economic Development for Chicopee, has been dealing with the fate of the sprawling former Uniroyal plant and neighboring property in the center of the city for more than 30 years.

And as he talked about the project and the recent progress made in readying the site for redevelopment, he chose words that were succinct yet powerful.

“We’ve had a stage-four cancer here in the heart of Chicopee for decades,” he said. “And cancer surgery is expensive.”

That cancer, of course, is the combination Uniroyal (tires) and Facemate (a Johnson & Johnson textile mill) site, a 65-acre strip of polluted land and buildings along the Chicopee Falls section of Chicopee River that, until last year, was home to 23 century-old manufacturing, administrative, and maintenance buildings in various stages of physical and environmental decay. Only 11 of the original buildings remain.

The area is officially designated by the Commonwealth as a ‘brownfield’ site, due to the high level of environmental contamination on the property — PCBs, petroleum, and asbestos have been identified there — and with this designation, as well as proper planning and considerable collaboration with state and federal agencies, the city has finally begun to see real progress in efforts to rehab the site.

Much of this momentum is due to an initiative launched by Lt. Gov. Tim Murray, who dealt with a number of brownfield projects when he was mayor of Worcester, and took that experience — and lessons learned from it — to the State House. There, in collaboration with Gov. Deval Patrick, he worked to create the Brownfield Support Team (BST), which in many ways complements the 1998 Brownfields Act by bringing together state environmental and economic-development agencies to target assistance for some of the Commonwealth’s most challenging and complex brownfield sites.

The Uniroyal/Facemate site was one of six across the state to receive assistance under Round 2 of the BST initiative; four others are in Attleboro, Chelmsford, Somerville, and South Gardner, while citywide assistance was granted for Brockton. (Springfield’s Chapman Valve site was among five included in the first round of funding).

Assistance from the BST has accelerated work on an initiative known as RiverMills at Chicopee Falls, a project that includes construction of a new senior center on the Uniroyal site, possible development of market-rate housing and office/retail facilities, and expansion of a river walk.

The BST was created to help communities clear the innumerable hurdles presented by brownfield-site redevelopment, including assistance with both charting a course for contaminated property and then dealing with — and securing funds and other support from — an alphabet soup of state and federal agencies, said Chicopee Mayor Michael Bissonnette.

To date, the program has helped to coordinate efforts and secure support from MassDevelopment, the federal Environmental Protection Agency, the Community Development Block Grant (CDBG) program, and others, said the mayor.

For this issue and its focus on Environment & Engineering, BusinessWest talked with Murray and city officials about the many challenges involved with brownfield development, and how the BST is helping to write a new chapter in the history of the Chicopee site.

Bissonnette said people in Chicopee often ask, “how come it takes so long to knock down those buildings?”

“I get that all the time,” the mayor sighed. “People don’t realize that it’s a very complex process that involves asbestos, mercury, PCBs, and other petroleum contaminants, and asbestos remediation, for one, can triple this long part of the process.”

He offered the example of a fictitious $2 million project to demolish an old manufacturing plant. The building looks hollow — just a pile of old bricks — but $1.3 million will be needed to properly dispose of all the contaminants, many broken down by the elements and leaching into the soil, while the actual razing of the structure costs only $700,000.

Returning to the Uniroyal/Facemate site, the mayor said, “we could sell it, on its best day, for $4 million, but it would take $20 million to get there [cleaned up], and then we’d hope for a private partner to develop it.”

The question is, who will pay that $20 million, he went on, adding that no private development would take on that burden and the municipality is certainly not in a position to do so. 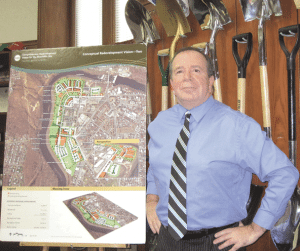 Michael Bissonnette says local residents don’t realize how costly and complicated it is to raze a large brownfield site.

Overcoming such stalemates and achieving progress on projects that have, like the Uniroyal property, moved at a snail’s pace for decades was the specific motivation behind creation of the BST, Murray told BusinessWest. He noted that clearing such roadblocks requires high levels of patience, collaboration, accountability, and, most of all, funding, and the BST was designed to generate all of the above.

He recalled a report showing that remediating Worcester’s brownfield sites would potentially result in almost $30 million in tax revenue for the city, which in one year would provide funds to resurface every needy street, cut property taxes, and allow aggressive movement on school construction.

“This was a pretty powerful data point that struck me,” he said, “and it got me thinking that, if we had a focused and disciplined approach, and prioritized the cleanups with the highest return first, we’d be making some progress over time.”

He convened the Mayor’s Brownfield Roundtable, which met monthly with the Legislature, the private sector, and state agencies to talk about how they could prioritize sites. Brownfield sites typically require massive environmental oversight and have multiple owners, and agencies are often putting liens against landowners or fighting one thing or another in several courts. All told, the complexity before one even gets to remediation is challenging at best.

In the case of the Uniroyal/Facemate site, all of the above were in play, and assistance from the BST has helped pave the path to progress.

“When we started, the city did not have control of either site, and the municipality had to get control of it, a clear title,” Bissonnette explained. “And the EPA had a lien against the Facemate land.

“We were in an interesting position of arguing with them [the EPA] that they were trying to collect money from us on the one hand,” he continued, “but eventually we’re trying to get money from them to clean this up on the other hand. It didn’t make sense.”

It eventually worked out as a ‘discharge of the lien,’ which was litigated in three different courts and is something quite rare, Bissonnette said. The city then partnered with MassDevelopment for a $4 million grant to do site assessment and remediation assistance, and the EPA gave $600,000 more for asbestos cleanup. A $5 million loan was taken out by the city, and $1.4 million from a Community Development Block Grant (CDBG) is being used to help pay that loan.

“The city has cobbled together pretty close to $10 million in federal and state monies and loans, with the city putting in $4 million of the $8 million needed for a senior center on the Facemate site,” said Haberlin. “In late October, we’re expecting to hear on approval of a $1.6 million MassWorks grant to finance the construction of roads, water, sewer, and a pump station to the senior center and two private parcels on either side.”

In all, the 65-acre site includes 45 acres (only 20 to 25 are buildable) of Uniroyal property, and 20 acres of Facemate, but while the Facemate area of the site is set, the Uniroyal ownership is another issue. Haberlin said it was purchased from a private owner by Michelin North America several few years ago, and the company inherited all the issues that come with a brownfields site; Michelin argues that it is responsible for cleaning up what the decaying buildings do to the soil, but not the buildings themselves.

Haberlin said he belives he has another five years of what he called the “Uniroyal saga” to contend with, and Bissonnette concurs.

“If this was easy, it would have been done before me.” Bissonnette said. “But the good news is that Michelin is coming to the table, and we are moving toward a joint agreement on how this will proceed.”

All those involved say the assistance from the BST has been instrumental in moving the process forward, and that the Chicopee project, the largest to date in terms of size to be so designated, provides more evidence that the unique initiative is working and worthy of emulation.

Murray said the Uniroyal/Facemate project was chosen for assistance because the RiverMills at Chicopee Falls redevelopment opportunity was already in motion and had solid potential for return on investment, but needed a higher level of coordination to move ahead.

“We try to target some of the bigger projects where maybe a municipality has some preliminary and conceptual plans done, so we don’t have to start from the beginning,” he explained. “But the municipality just needs the technical expertise, the resources, and the staff power to move it forward.”

Through the BST, said the lieutenant governor, a dedicated staff person from each of the agencies is assigned to the project in question, providing a level of ownership, or accountability, that is needed with such complex projects.

“They are involved in weekly conference calls and monthly meetings,” he explained. “The idea is that you’re all in charge [of your own agency], and it’s your responsibility; you’re accountable. And it’s been a very good model.”

Murray is encouraged by not only the recent remediation progress of Round 1 of the BST and now the advancement of Round 2, but the EPA reports that other states are looking at the Massachusetts model to replicate it.

“I do think we are ahead of the curve, and in the last round nationally of brownfields money [$69.3 million in assessment/cleanup grants and revolving loan funds], we got $6.75 million of that total, far and away the highest total of any state,” Murray told BusinessWest. “I think it’s because we have a track record of collaboration and coordination, and we want to get this money from the federal level as quickly as possible so communities like Chicopee are the beneficiaries.”

Round 3 is in the works, and all teams, especially the DEP and EPA, will be looking at which sites could be next. And a large number of projects are competing for funds, something Murray says is a good problem to have.

“It forces the communities to prioritize which sites they want to go forward on,” he said, “and forces municipalities to come up with consensus plans and be disciplined in their approach.”

For Chicopee, the figurative field of dreams is quickly — at least by government standards — becoming the literal reality. Bissonnette is encouraged by the many comments from people he sees at the post office in Chicopee Falls, who no longer stare at the old, vacant Facemate buildings.

“It’s an encouraging sign for them; those buildings are gone, and it means progress,” said the mayor. “We will soon have the most beautiful walk and bikeway along that river. It’s gorgeous, but they just can’t see it yet.”

In other words, the expensive cancer treatment is working.