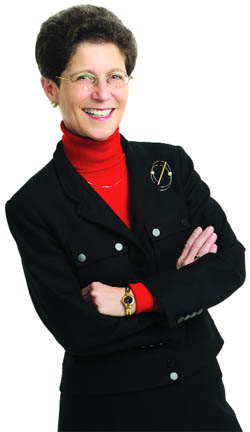 Upon hearing that more than a few of the many people who nominated her for the Difference Makers Class of 2010 wrote that she “transformed care for older adults,” Carol Katz chuckled before saying that she found such language flattering, if also a little excessive.

“I would hardly call myself transformational, but that is a term that’s used in our industry in some ways,” said Katz, CEO of the South Hadley-based Loomis Communities, before quickly acknowledging that she obviously played a lead role in that organization’s drive to stay atop — and well above — the curve when it comes to adopting the more-patient-centered model of care now being embraced across the country (more on that shortly).

“And besides,” she continued while explaining this concept and why and how it was incorporated at Loomis, “I certainly didn’t do it all by myself. It’s been a total team effort.”

Elaborating on the patient-centered model, Katz said that, as the name suggests, it puts the patient at the center of care initiatives. As logical as that sounds, she told BusinessWest, until about a decade ago, the staff at long-term-care facilities such as nursing homes was in the center, in the so-called ‘patient-care’ model.

“Traditionally, care has been provided in a very institutional way, and nursing homes in particular, like hospitals, are staff-driven, with things done for the convenience of the institution and as far from home life as it can possibly be,” she explained. “There’s been a movement afoot for some years now, in nursing homes but also other facilities, to really change the culture to what they call person-centered care.

“It’s not enough just to make it more home-like,” she continued. “It’s placing the patient at the center of the care, not the staff. Instead of bringing in extra people on Monday, Wednesday, and Friday, and that’s when everyone gets their showers, you ask the patient, ‘do you like to take a shower or a bath, and would you like it in the morning or the evening? It’s not what’s convenient for the staff; it’s what the patient wants.”

As a result of the teamwork Katz mentioned, Loomis Communities became one of the first institutions of its kind to receive state grants to implement this new way of providing care, and Loomis House was just the second nursing home in North America to receive person-centered-care accreditation.

But these transformational efforts comprise just one of the realms for which Katz has been called a Difference Maker. Others include her work to expand the Loomis Communities, her service to innumerable nonprofits in the area, and her ongoing efforts to create a culture of giving back at all of the Loomis facilities.

When she arrived in 1989 after stints with skilled-nursing facilities in Wisconsin and Agawam, Loomis had one facility — Loomis House in Holyoke — with a second, Loomis Village, under construction.

Recognizing the need to continually expand to better meet its mission, but also understanding that new construction wasn’t (and still isn’t) needed because of demand levels, Loomis has grown through acquisition.

The first such move was Applewood in Amherst, and the second was Reed’s Landing in Springfield, the bankrupt facility that was acquired late last summer. There, Katz has led a change in the fee model that has put that facility within reach of far more area residents.

While expanding Loomis Communities and changing its model of care, Katz has also volunteered her time, energy, and expertise to organizations ranging from the Holyoke Chamber of Commerce to PeoplesBank; from Westfield State College to her synagogue; from the United Way to the Holyoke Rotary Club.

She says she finds nonprofit governance to be “fascinating,” and, over the years, became very interested in the subject of nonprofit management, while becoming what she called a “board junkie.” However, she says she limits her work, and the number of ‘yeses’ given those who ask her to serve, to areas that have relevance to her professionally or personally, “or something I think I can help make a difference.”

And she has made giving back to the community part of the culture of life at all of the Loomis communities. Indeed, residents have contributed to a number of causes and charitable events. For example, they have sold decorative Valentine’s Day cookies to benefit the American Heart Assoc.; sold daffodils and participated in the Relay for Life for the American Cancer Society; walked, raised money, and sold more than 183 dozen blueberry muffins to benefit the Alzheimer’s Assoc. Memory Walk; staged blood drives for Cooley Dickinson Hospital, Mercy Medical Center, and the American Red Cross; sold Brightside Angels at the Holyoke Mall; and wrapped gifts for the hospice program of the Holyoke Visiting Nurse Assoc.

“Our five-year strategic plan has five focus areas, and the first one is community integration, and that means both having events on our campuses that bring the public in and engaging our residents in the broader community,” she said, noting that many residents in each Loomis facility are from the community in question. “Just because you move from an address in South Hadley to Loomis Village doesn’t mean you stop being a citizen of South Hadley.

“We’re involved — and one of the reasons I’ve gotten involved with so many civic organizations over the years is because it’s the right thing to do; it’s the way I was brought up,” she continued. “We rely on the community to give us residents and give us services, and we owe back to the community.”

The sum of all this work across several different fronts prompted the many who nominated Katz — a group that included some who work with her at Loomis, a few of the organization’s board members, others who serve with her on boards and commissions, and some who simply admire her work — to stretch their vocabularies and find phrases such as these:

That last writer probably spoke for everyone who has worked with Katz in any of the many settings in which she has made a difference. —George O’Brien