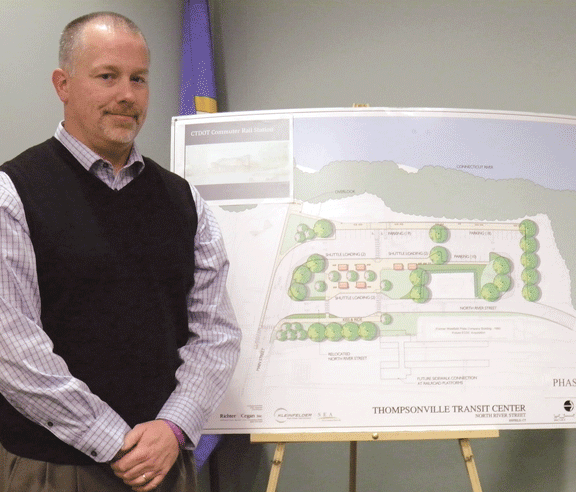 Peter Bryanton says Thompsonville was a thriving center in its heyday, but may be on its way back.

Enfield town officials have had a revitalization plan for the village of Thompsonville for more than two decades now. It was created in 1992 after the former Bigelow-Sanford Carpet Co. was transformed into a 470-unit apartment complex.

Community Development Division Director Peter Bryanton said that Thompsonville was a thriving center in its heyday, with stores, eateries, and businesses that benefitted from the people who lived in the neighborhood and worked in the Bigelow factory. But after the mill closed in 1971, the area began to languish, and many neighborhood businesses closed their doors.

However, when construction on Bigelow Commons began, small businesses began to open again. “Town officials thought Bigelow Commons was a new starting point and formed a committee to work toward revitalizing the village. The Thompsonville Revitalization Strategy Plan was created as a result of their effort, and although it was a good plan, it was never implemented due to a lack of funding and resources,” Bryanton told BusinessWest, adding that updates were made in 2010.

But over the past year, a great deal of progress has occurred, and what was once a dream is fast becoming a reality. In fact, the town held a recent breakfast for commercial real-estate investors, developers, consultants, and other interested parties, which was attended by more than 100 people. The goal was to let them know about projects and new initiatives that have drawn residents and tourists into Thompsonville, and why it is has become a desirable investment.

“We told people what we’ve done and where we are headed, and we also created a book for them that shows every piece of property available in Enfield,” said Courtney Hendricson, assistant town manager of Development Services, adding that the impetus behind the recent initiatives was the announcement that a commuter rail line linking New Haven, Hartford, and Springfield will begin operating in 2016.

“Our plan revolves around building a new, multi-modal transit center that will include commuter rail and bus service; we know that many people want to live near these stations,” she said. “Rail service will make it easy to get to different places without owning a car, and surveys show that people in their 20s and 30s overwhelmingly want a walkable lifestyle. There is generally a 30% increase in property values within a half-mile of a transit station.”

Bryanton agreed. “Revitalization is finally happening; five years ago it was just an idea, but now it’s a reality. Once Enfield has commuter rail service, it will become a destination for people looking for a lifestyle based around public transit — we just need to get the transit center built,” he said, adding that it will be located in the former Westfield Casket Hardware building on 33 North River St.

He added that the four-story structure, which sits on the Connecticut River, is owned by Enfield Community Development Corp. and is in good shape.

“The ground floor will be used as the entranceway to get upstairs to the second floor, where the rail platform will be located. The third and fourth floors will be turned into loft apartments,” Bryanton said, adding that a portion of space on the first and second floors will also be designated for mixed use, which will allow people to shop, eat, and do business at the station.

However, land is needed to build a parking lot and a bus turnaround, and the town has been negotiating with Northeast Utilities about a plot adjacent to the building that was once home to a power plant. It is contaminated, so the negotiations are focused on who will pay for the cleanup, which will likely be a joint effort financed with brownfield grant money and funds from NU.

“In addition to the parking lot and bus turnaround, we also plan to build a new riverfront park on the property,” Bryanton said.

Town officials are lobbying the state and federal government to get funding to build the transit platform. “State officials told us they will build it after the rail service begins, but that means it would not stop in Enfield when it starts up, which is key to our development focus,” Hendricson said.

However, work is progressing, and Connecticut recently launched the Hartford Line. The commuter rail service will use Amtrak’s New Haven–Springfield Line and supplement existing intercity rail services between the two cities. The project is a joint venture between Connecticut and Massachusetts, with support from the federal government.

Once the line is operational and the transit platform has been built, Enfield officials say, they plan to focus their efforts on promoting public transportation, which will help spur private investment in the village.

The first is an initiative called Riverfront Recapture, which involves capitalizing on access to the Connecticut River. “It’s our greatest natural resource and borders many of our neighborhoods as well as downtown Thompsonville, so we feel it has a lot of potential,” she explained, adding that the town plans to build a hiking and bicycling trail along the river, extending from Fresh Water Pond to the business corridor and down to the river. It is currently in the design stage.

The second and most important pillar is the revitalization plan for Thompsonville. “But we don’t want to ignore our other neighborhoods, which include Hazardville,” Hendricson said, noting that lessons learned from a successful streetscape plan implanted there, as well as from projects completed in other areas of town, will be employed in Thompsonville’s revival.

She also stressed that town officials feel it is important to celebrate the businesses that stayed open after the Bigelow carpet factory closed and have done well.

The fourth pillar is to continue to attract new businesses and retain the 3,000 companies that make Enfield their home. “They include many Fortune 100 companies,” said Hendricson. “We share the headquarters for MassMutual and are home to the headquarters for the North American and South American branches of Lego. The Hallmark Distribution Center and Advanced Auto Distribution Centers for the entire East Coast are also in Enfield, and we have many small, mom-and-pop businesses and home-based operations.”

Finally, town officials also plan to take advantage of the traffic that the MGM casino in Springfield will generate. “We believe Enfield could serve as a secondary destination because we have so many retail businesses and restaurants,” Hendricson said, discussing how the commuter rail platform in Thompsonville will play into the equation.

The revitalization of that village is being done in stages. The infrastructure around Fresh Water Pond, located in the center of the neighborhood, has been upgraded with new lighting, benches, planters, and trash receptacles. “We are also working to improve a walking path around the lake,” Hendricson said. “It is an ongoing effort.”

Engaging the interest of businesses and residents is another element in the plan. “It’s critical to make sure the neighborhood meets their needs,” she went on.

Hendricson noted that Thompsonville contains many multi-family homes, and although officials hope new residences will be built, they want to retain the character that was established when the carpet mill was thriving. “We’re not looking to change the proportion of multi-family housing. But we are looking to increase the number of housing options, so people can choose to live in a loft apartment, a multi-family residence, or a single-family home,” she told BusinessWest.

Town officials have staged new events over the past year to attract people to the center. The signature event was a Community and Farmer’s Market, staged from June through October on Wednesdays from 4 to 8 p.m. in front of Fresh Water Pond. There were 30 to 40 vendors each week, including artisans, farmers, food trucks and community groups, said Hendricson, adding that the market was a great success and went far beyond expectations.

Festivals were also held for families on Earth Day and Halloween, which generated positive feedback, while a presentation for business owners allowed officials to share their vision for the future. “We gave awards to businesses who have been in Thompsonville for years; we wanted to recognize and thank them. We plan to do this annually,” Hendricson said.

In addition, land was set aside to create a community garden. “There were 50 plots, and we asked people to pay $25 to become a member. They received soil and seeds, and they shared equipment. The town provided water, porta-potties, and security cameras, and a master gardener from the University of Connecticut gave a weekly seminar,” Hendricson said. “The garden was run by volunteers, and people are already asking if we are going to do it again next summer. We’ve been really working to engage the community.”

Another initiative, which focused on the use of alternative transportation, proved highly successful. Called the Magic Carpet Shuttle, it’s a bus service that takes people through the town with a number of dropoff spots. It connects to the Hartford Express (run by the Connecticut Department of Transportation) in the Macy’s parking lot.

“We started the shuttle to prove that residents will use other modes of transportation, but it has taken off beyond our expectations,” said Hendricson. “We expanded the route and the hours because 100 to 150 people ride on it every day.”

The success of these programs is being used to show investors that the outlook for Thompsonville is bright. “We’ve been meeting with developers in Greater Hartford and Springfield who are looking for opportunities,” she went on.

The town is also in the process of changing the zoning in the village, Bryanton added. It is mostly residential, but will soon have more areas designated for mixed-use development.

Town officials believe their vision for Thompsonville will be realized over the next few years.

“We’ve done our homework and are making it into a desirable destination by bringing back its economic vitality,” Hendricson said. “There is so much potential, and I can easily picture it becoming a walkable, safe, attractive downtown for tourists and residents. I have no doubt it will happen.”

Bryanton agreed. “It’s been a long process to get where we are today, but we are finally on the doorstep,” he said. “We have a vision, and we know that, once the transit center is in place, people will come here.”

Enfield at a glance 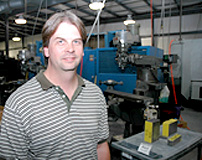 Getting Down to Business…