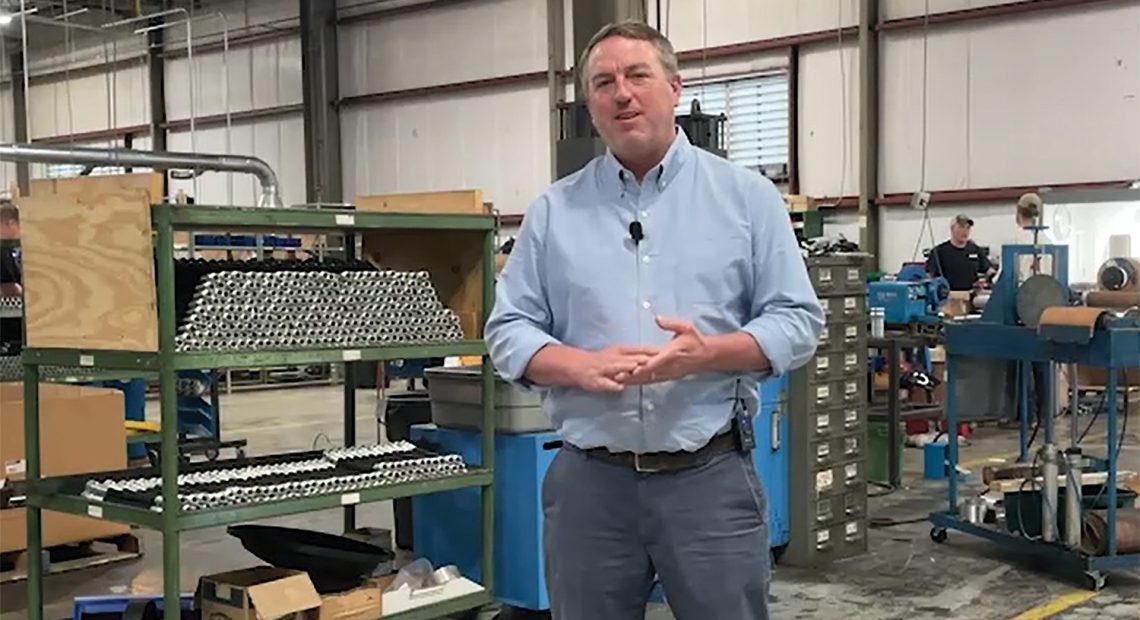 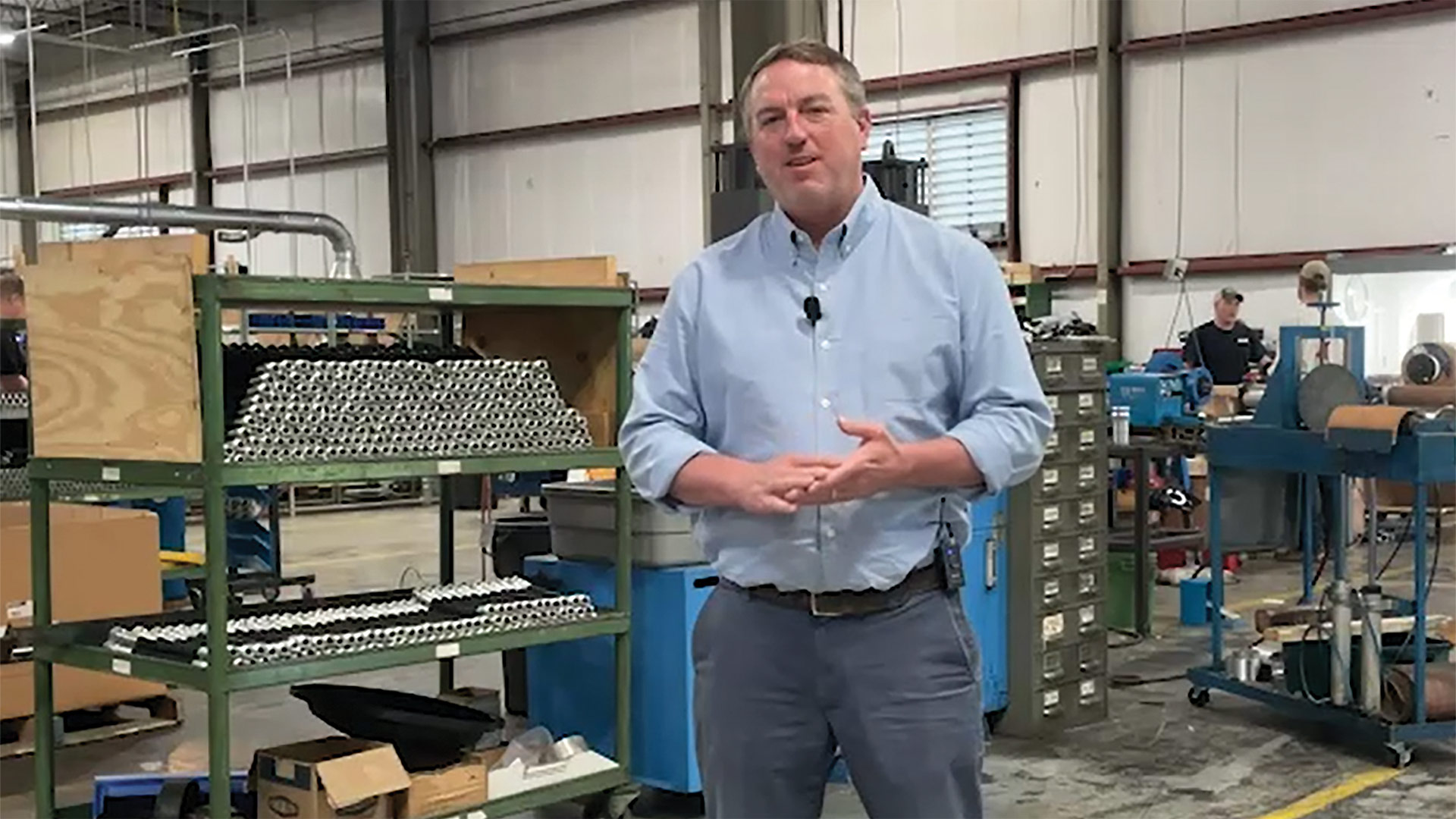 Alex McGill says his company considered other options, but decided it wanted to be in East Longmeadow

Roughly 60 years ago, McGill Hose and Coupling opened on Benton Drive in East Longmeadow. About six months ago, it moved into a new building around the corner on Industrial Drive that is more than double the size of its old location.

McGill is a custom fabricator of hoses and tubes for a wide variety of industries, everything from fuel delivery to food and beverage to pharmaceuticals. In short, any industry that requires hoses and tubing can be served by the company. Alex McGill, vice president at McGill, said the pandemic and supply chain challenges have caused some hiccups, but at the same time brought more business from pharmaceutical companies, especially in the Northeast.

“The opportunity came about because of the level of service we offer and because we are accessible to our customers,” McGill noted. “Our willingness to work around the clock to make sure customers get what they need has won us quite a lot of business over the years.”

While the company could be located anywhere, and could have moved anywhere when expansion became necessary, McGill has chosen to remain in East Longmeadow.

“We’ve grown to love the neighborhood and our neighbors,” he said adding, “we rely on our retail business where people can come in for their supplies. It’s also a friendly location for our employees.”

Secure Energy Systems has a story that is similar in many ways. The company was located on Somers Road until 2016 when a fire destroyed the company’s building. Nearby Cartamundi provided temporary space for Secure Energy while it sought out a new location.

“We’ve grown to love the neighborhood and our neighbors, we rely on our retail business where people can come in for their supplies. It’s also a friendly location for our employees.”

“The owners of the company had purchased a property in Enfield, but it just didn’t feel right to them,” said Erin Bissonnette, senior energy sales representative for Secure Energy. “They wanted to stay in East Longmeadow because they felt this was their home and they didn’t want to leave.”

So, in 2018 Secure Energy found the right space a few doors down from the manufacturer Cartamundi on Shaker Road and bought the building that formerly housed the laser company Biolitec.

These stories are among many others that relate how East Longmeadow has become an increasingly popular home for families and businesses alike. As for the ‘why’ this is happening — there are many reasons for that, including quality of life, a still-favorable commercial tax rate, available land and property, and, overall, a pro-business approach that is prompting new businesses to settle there, existing businesses to stay, and entrepreneurs to find space there to get started, as we’ll see.

And while businesses owners are choosing to invest in the community, East Longmeadow is making investments in itself.

The East Longmeadow Town Council recently passed the Fiscal 2023 budget, which includes funding for 19 capital projects in town. One prominent project involves a major redevelopment of Heritage Park. According to Town Manager Mary McNally, the initial design and permitting phase of the redevelopment will come from Community Preservation monies. Funding from the American Rescue Plan Act (ARPA) will cover the other 18 projects.

“They range from investing in the town’s IT needs to police cruisers, a fire engine and DPW trucks,” McNally said. “There are enough projects to stimulate lots of economic activity in town, providing we can get the contractors and the materials to get it all done.”

For this, the latest installment of its Community Spotlight series, BusinessWest takes an in-depth look at how all these many kinds of investments are paying off for East Longmeadow.

After a renovation that Bissonnette described as “down to the steel beams” Secure Energy, which specializes in the procurement of natural gas and electricity for its commercial and industrial clients, now has a modern, airy office with amenities for employees such as a kitchen, large gym, and an outdoor gathering space. And there is plenty of room for growth.

“We negotiate with the same suppliers the utilities use and lock in the price and a term for the energy commodity, whether it’s for 6 months or 60 months,” Bissonnette said.

“These are women who have had certain passions and interests and now they are trying them out. They are exploring their ideas to see where it will all lead. It’s exciting to see.”

As a result, a business can know what their energy will cost for the length of the term, a service more valuable these days than ever before.

“Some clients will forget they extended their term beyond 2022 and will call us in a panic,” Bissonnette said. “Then we reassure them that our energy advisors grabbed the lowest prices months ago and locked in that rate. As a result, customers who were concerned are now very happy.”

Secure Energy is part of a growing, very diverse business community in East Longmeadow, one that takes full advantage of many amenities, including a favorable location near population centers and the border with Connecticut, as well as land on which to build and grow.

McGill Hose and Coupling is another example. 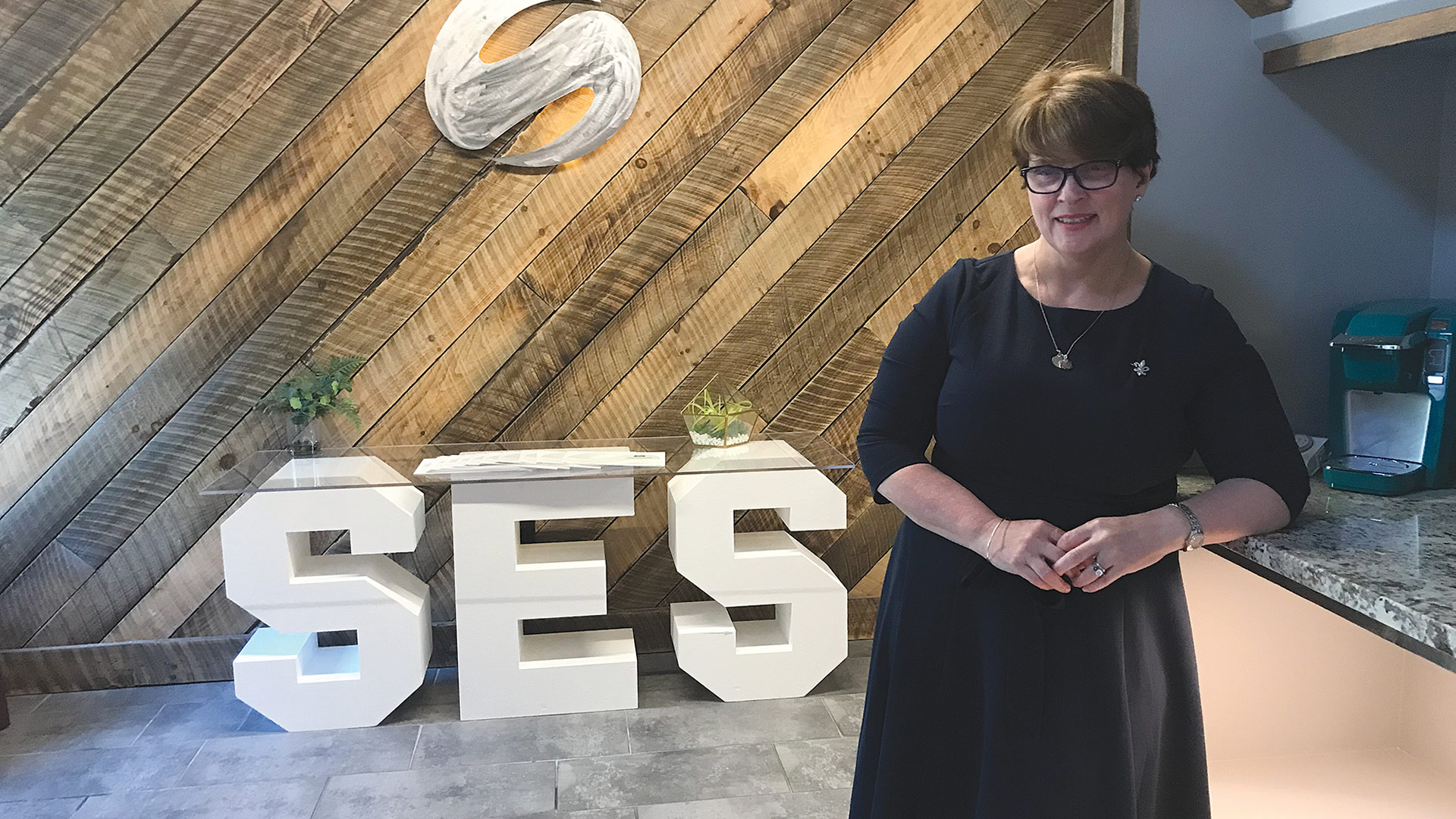 Erin Bissonnette says Secure Energy wanted to stay in East Longmeadow, because it “felt like home.”

As McGill employees settle into its new location, Alex McGill said the company’s next goal involves growing the business and the team working in East Longmeadow.

“We’re putting more of an emphasis on our employees,” McGill said. “We’re building a team atmosphere that has become a real catalyst for our recent growth.”

Using the strategy “if you treat your employees right, they will treat your customers right” is already paying off.

“We are poised for a nice shot of growth,” McGill continued. “We are paying attention to the future and investing in our employee culture serves as the guiding light for our growth.”

The same sentiments apply to the town and many of the investments it is making.

Indeed, as part of the budget, the town council also approved hiring for 13 positions in various town departments. McNally said Town Hall is scheduled to get 5 full time and one part time position out of the total.

“The staff at Town Hall work very hard to get things done,” McNally said. “Life would be easier if we had more staff, so I’m very pleased the council saw fit to fund these positions.” The extra staff presents a challenge of finding room where the new hires can work. The town is currently trying to find a balance between locating a department or two to another building without spreading municipal offices all over the town.

Meanwhwhile, a new high school represents a longer-term investment that is moving through town and state approval processes. The town will host three visioning sessions to show residents what a new school could look like and to solicit ideas from the public on what they would like to see for a new high school.

“These will be hybrid meetings so the public can take part in person or virtually,” McNally said. “I hope we get a good turnout and that people will participate.”

One of those 18 ARPA projects includes roof repairs to the current high school.

“This is a fix that can’t wait for the years-long process of building a new school,” said McNally.

Another investment trend in East Longmeadow involves people investing in themselves.

Grace Barone, executive director of the East of the River Five Town Chamber of Commerce, said recent networking events she has held are attracting many young entrepreneurs. Barone said new pop-up shops are beginning to appear and most of them are women-owned businesses. 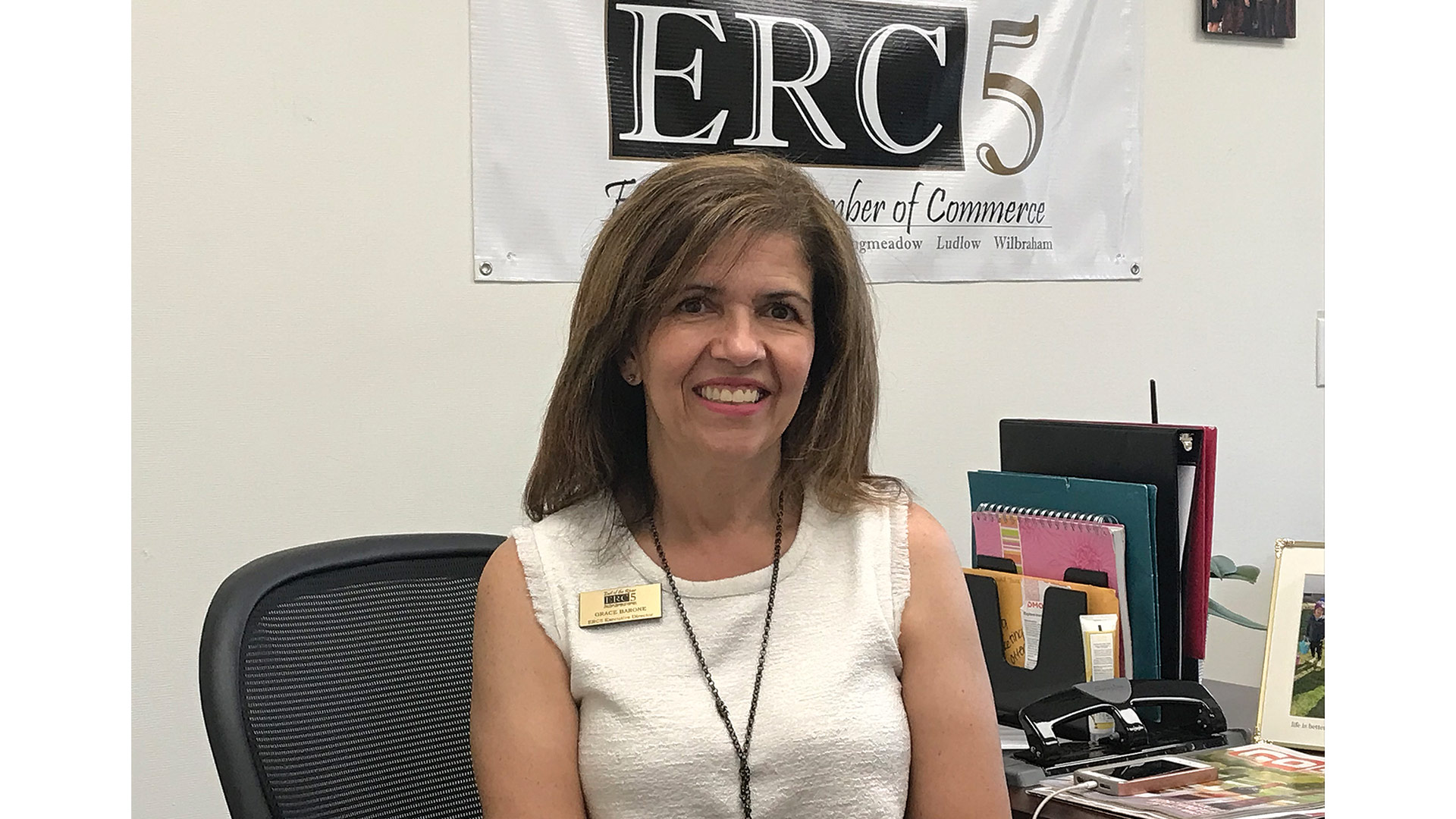 “These are women who have had certain passions and interests and now they are trying them out,” said Barone. “They are exploring their ideas to see where it will all lead. It’s exciting to see.”

One of those entrepreneurs recently leased space in the Reminder Building, where the Chamber office is also located. Chris Buendo, owner of the building, said he has welcomed startups to the Reminder Building and now has an eclectic mix of tenants. In fact, he allows tenants to provide a 60-day notice to break their lease instead of holding them to a typical one year or longer term.

“The shorter notice takes a little pressure off a start-up company,” said Buendo. “Rather than signing a long-term lease that they may later regret, I have faith that what they are doing is going to work so I want to relieve some of that pressure so they can succeed.”

The height of the pandemic was a scary time for commercial real estate, and Buendo said he lost many tenants who abandoned their office space to work from home. As the world slowly emerges from COVID concerns, he said business has come back.

“The good news is I’m getting calls again,” Buendo said. “Working from home is nice but it’s not a perfect scenario, so people are calling me to say it’s time to return to the office.” And return they have, as Buendo noted he has only one available space in the Reminder building. 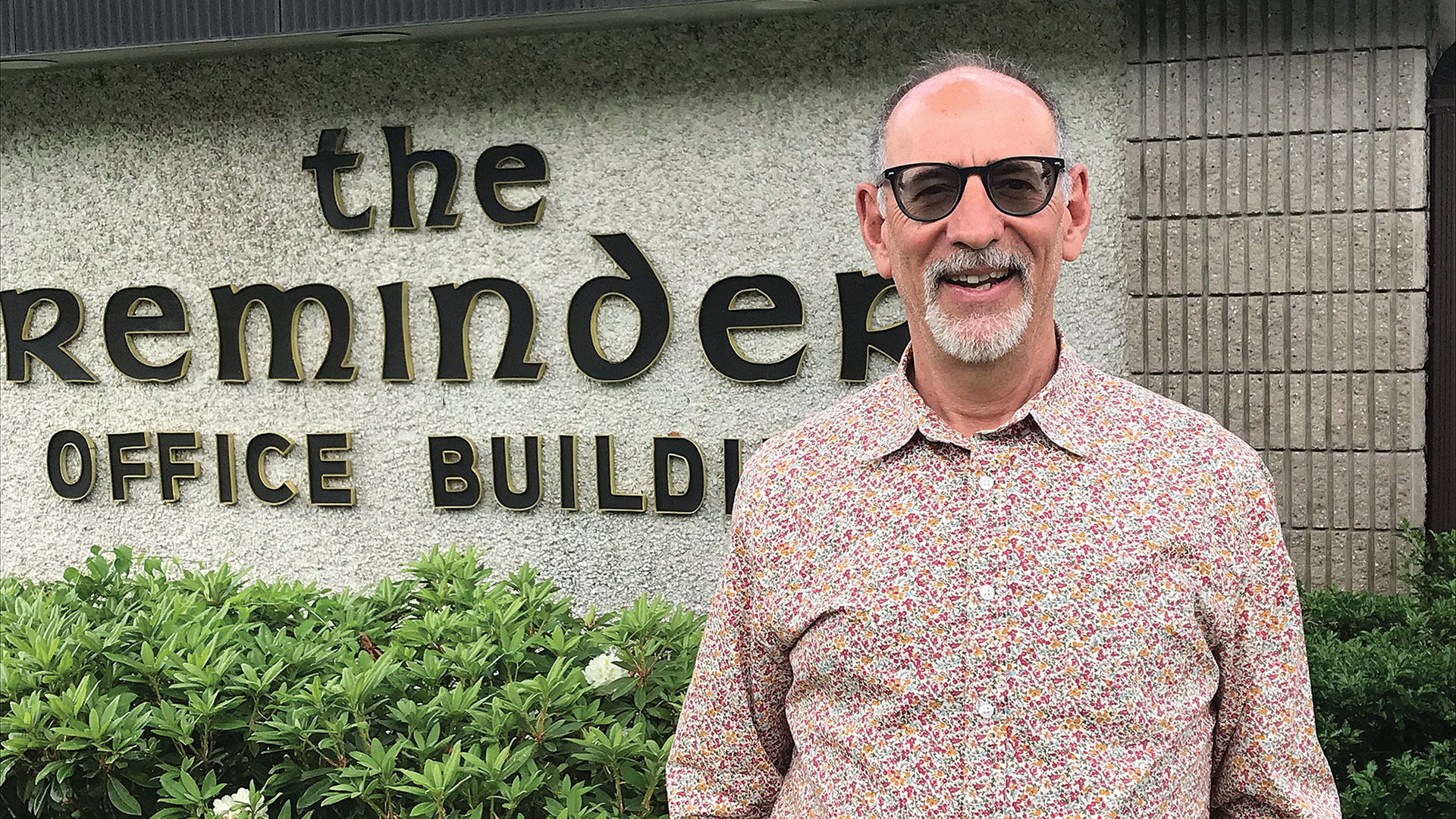 Chris Buendo says growing interest in office space in the town is a sign of progress.

At the town level, in addition to the new jobs approved by the council, several key positions have turned over because of retirements and career changes. McNally explained that over the last year the town has brought on a new planning director and a new library director. McNally herself plans to retire when her contract ends on June 30.

At press time the town had chosen a new town manager and was in the process of negotiating the final contract before announcing the new person.

As for McNally, her next move is well planned.

“I’ll be on the golf course, at the ocean, or with my family, not necessarily in that order,” McNally said. “I’m a lawyer by training so I could re-new my license if I get bored, but for now I’m ready to call it a day.”

As she prepares for retirement, McNally is pleased that thanks to investments from the private sector and the town, East Longmeadow is in solid financial shape going forward and in a position to continue the remarkable pattern of growth it has seen in recent years. u