Strike Up the Bands 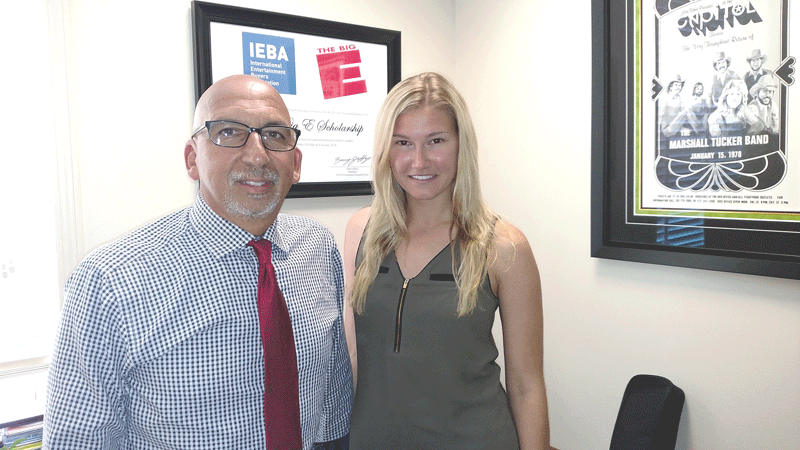 John Juliano and Anne-Alise Pietruska say procuring musical talent for the Big E is a year-round challenge, and several acts have already been booked for 2018.

John Juliano has been booking entertainment at the Big E for almost 30 years, but his first job for the fair was a little less glamorous. Specifically, it was a part-time gig cleaning out horse stalls in 1982.

He didn’t mind, though, because it was money in his pocket, and a chance to be a part of a regional icon he’d loved from his childhood.

“It was always my favorite thing to do,” said Juliano, senior director of Sales, Marketing & Entertainment for the Eastern States Exposition. “When I was in junior high school, across the street in Agawam, I’d hop the fence and sit in the bleachers. My buddy would be chasing girls, and I was on the bleachers, waiting to see a show.”

Given his predilection for live music, it wasn’t surprising that Juliano moved on from the horse barn to a job in fair operations in 1984, and started booking acts five years later. It’s a role that affords him creativity and the ability to shape the musical atmosphere of the Big E, but also a challenging, year-round effort — some acts have already been booked for 2018 — that requires a good deal of hustle.

So, when fairgoers hear that Grand Funk Railroad, Cole Swindell, Cam, Smash Mouth, and Night Ranger will perform this year in the 6,300-seat Xfinity Arena, or peruse a list of 23 free concerts on the Court of Honor Stage, ranging from up-and-comers to big names like the Lovin’ Spoonful, Sheila E., and the Sugarhill Gang, they might not realize the amount of research, legwork, and networking it takes to secure them — particularly at a time when many artists are simply out of the Big E’s price range.

“Our budget, despite what most people believe, is not astronomical,” said Anne-Alise Pietruska, whose business card reads ‘brand content / entertainment,’ three words that don’t quite illustrate the number of hats she wears, from social-media marketing to graphic design to article writing. A few years ago, Juliano learned of her passion for — and knowledge of — the live-music realm, and welcomed her into his world — and gave her another hat.

If we feel an act will sell tickets, that’s somebody we’re going to go for. We sit here with issues of Pollstar and Billboard and go back and forth about every single act — where they’ve played, what their gross is, what their attendance is, and how they would play here. Some acts that wouldn’t play well in South Dakota will go over well here.”

“If we feel an act will sell tickets, that’s somebody we’re going to go for,” he said. “We sit here with issues of Pollstar and Billboard and go back and forth about every single act — where they’ve played, what their gross is, what their attendance is, and how they would play here. Some acts that wouldn’t play well in South Dakota will go over well here.

“We know our demographic pretty well. We’ll get an agent who’ll call and pitch us an act, but we know it wouldn’t work well. Or we’ll call them, and they’ll say, ‘that’ll work at the Big E?’ And I say, ‘yeah, I think it will work.’ We’re always trying to find something new,” he went on, singling out two of this year’s free acts — roots rocker Martin Sexton and R&B dynamos Vintage Trouble — as examples of artists who make up in stage presence what they may lack in the household-name department.

Even something as simple as last year’s decision to cover the Court of Honor stage with a tent is making a difference, as some acts would rather not play while exposed to possible — well, Pietruska almost said rain, before admitting that’s not a word folks like to say out loud in the Eastern States offices. She did call the tent a big hit, however, one that makes the venue more attractive to performers and attendees alike.

“It allows us to expand our lineup by bringing in more diverse bands covering all genres of music, and tap into artists who have strong followings in this area.”

But crafting each year’s musical lineup takes much more than a tent and some phone calls. It also requires plenty of foresight, a dollop of passion, and an occasional leap of faith. 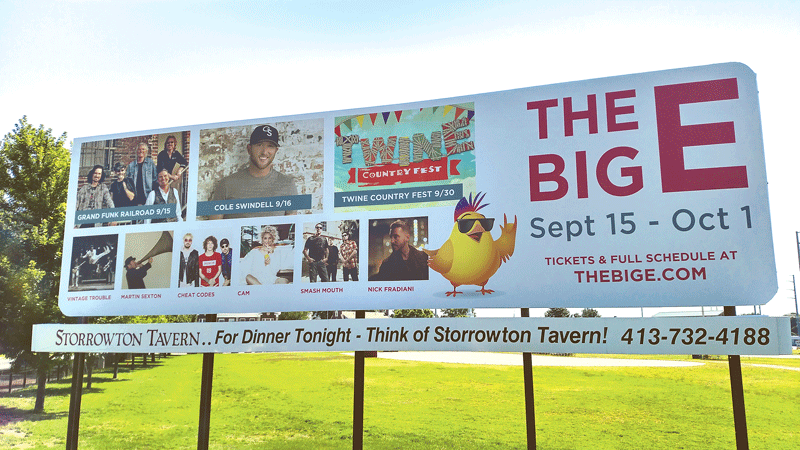 The billboard at the West Springfield-Agawam line only scratches the surface of the variety of music on tap for this year’s fair.

The foresight and leaps of faith often collide, actually, in an annual game of ‘buying low’ on an act that’s just about to make it big.

That was the case with Cheat Codes, an electronic-music trio from California that was among the final acts booked for the 2017 fair; Juliano, who came across the band in Billboard, is convinced their fee will double by next year.

Sometimes, landing a band on the cusp of stardom for a reasonable price backfires. Take the country act Midland, with whom Juliano admits he became a little obsessed when he heard they would be at South by Southwest, the massively influential annual music festival in Austin, Texas (one of many he and Pietruska visit each year).

He scored a meeting with their manager, struck up a relationship, and nailed down a date for Midland to play in West Springfield. But two months later, their record label cancelled the gig.

“Their album was dropping the week they were going to perform at the fair, and the label would rather have them out at radio stations than playing before 6,000 people,” he recalled. “That was frustrating, to lose out on an act after putting in a lot of time and effort.”

Pricing itself has become frustrating in recent years, with some acts charging $50,000, $100,000, or more to play the fair, which is why the Big E — which, for generations, offered all concerts as part of fair admission — started charging extra for several shows each year (the vast majority remain free).

That said, as one of the most well-attended fairs in the country — typically ranking between fifth and seventh on that list each year — the Big E is a draw for many performers. A veteran of several music-association boards, like the Academy of Country Music, the Country Music Assoc., and the International Entertainment Buyers Assoc., Juliano knows from conversations with artists, managers, and agents that the Big E has plenty of credibility in their industry.

“If they didn’t want to play here, my phone wouldn’t be ringing off the hook,” he told BusinessWest, adding that performers are treated well, if not exactly in luxury, this being, after all, an outdoor agricultural fair. “We’re not a billion-dollar casino, so we can’t afford fancy dressing rooms, flatscreen TVs, and all those niceties, but when they come to the fair, we treat them like they’d want to be treated.”

In the end, however, it’s about the fan experience, and the Big E is tossing in a few extra wrinkles this year, like the Twine Country Fest in the Xfinity Arena on Saturday, Sept. 30, featuring four hot touring acts: Granger Smith, Parmalee, the Cadillac Three, and Lindsay Ell.

“It’s been exciting for me to add my marketing perspective and creativity and develop events that take on a life of their own under the Big E umbrella, and Twine is one of those,” Pietruska said. “Our country fans are so loyal.”

That loyalty to music can benefit the Big E in the long run, Juliano said, noting that more than  90% of fair attendees on any given year eventually come back. If the 17-day gala can draw a few newcomers because of a band they want to hear, perhaps they’ll have a good time walking around the fairgrounds, gorging on fried food, or perusing crafts and animal exhibits, and decide they want to be among that 90% who return.

“With any new show or event we bring in, we want to attract a new audience that might not typically come to the Big E, but might come for that particular entertainer,” Pietruska said. “And we’re seeing that pay off.”

Clearly, the Big E’s entertainment team members have put their hearts into a key aspect of New England’s famous fair, which is why it’s discouraging, Pietruska said, when critics read booking updates online and lash out as Internet trolls do; one, clearly unimpressed with the music slate, recently called Juliano “a waste of space.”

“Because I manage the social media, that can be painful for me,” she said. “But my focus is on making the Big E even more of an entertainment venue than it already is.”

Juliano agreed. “I get so much gratification from this, and we work so hard on this, you can’t let the critics get to you.”

Then it was back to the phones, chasing down 2018’s next big thing — before the price doubles.

Navigating the Challenges of ADA 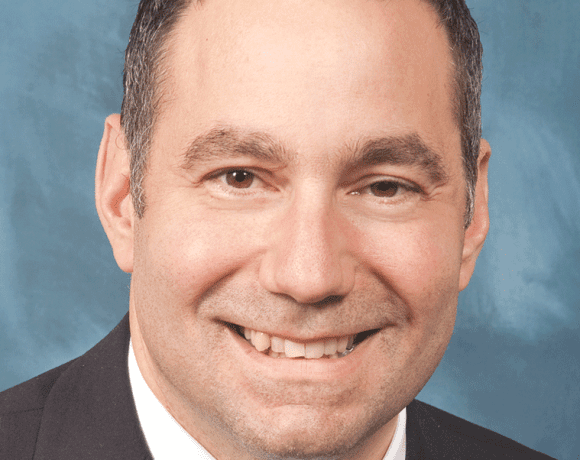