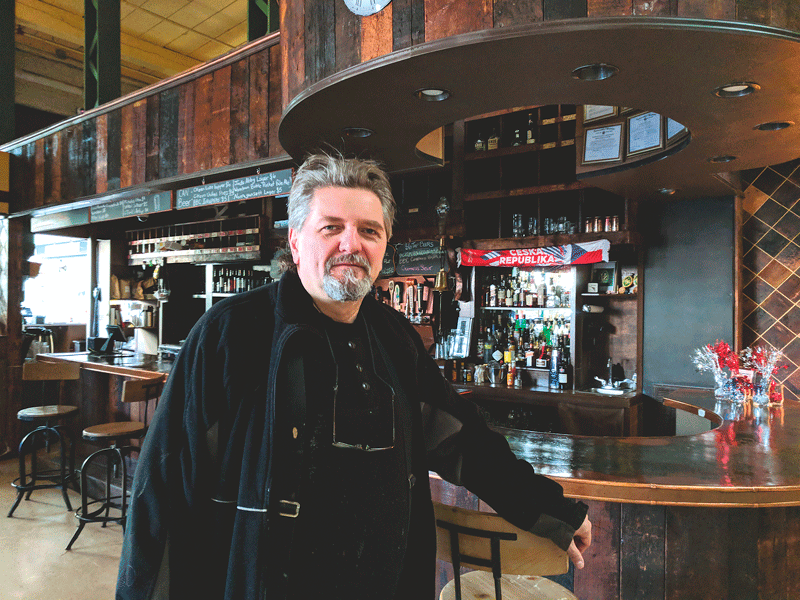 Vitek Kruta stands in the Hub at GCA, which hosts concerts almost weekly.

Gateway City Arts touts itself as “a venue for events, entertainment, dining, art making, teaching, and learning.” That’s quite a mouthful, but the sprawling complex in Holyoke’s growing innovation district, beside its historic canals, has certainly become all that and more. It’s a model, co-owner Vitek Kruta says, that not only raises the profile of local artists and startups, but boosts tourism and raises the city’s economic profile.

Today, the complex known as Gateway City Arts houses artist studios, operates a restaurant, presents concerts on a regular basis, and hosts events of all kinds. But Vitek Kruta says its origins were much more humble than that.

“The whole thing started because I was looking for my studio,” said Kruta, an artist himself, who, along with business partner Lori Divine, bought the facility on Race Street in Holyoke five years ago. “We stumbled upon this space, and we loved the building. Then it took several months to negotiate to get it. Once we did, we asked, ‘now what do we do with all this space?’”

All they knew for sure was that they saw something unique in the empty warehouse along the city’s canals. Now, the facility functions as a co-working space for artists and others during the day and an event space on nights and weekends, one with a decidedly funky vibe.

Kruta and Divine were no strangers to the area arts scene. He had been involved in New City Art in Northampton, and she with the Guild Studio School in Northampton, among other roles. “We were both always interested in building community around art, providing space for artists’ classes and concerts and the interaction of all these disciplines. Now we had this huge building, so what can we do with it?”

Besides housing his own studio — he restores fine art — in the complex as planned, Kruta and Divine slowly began the process of cleaning up the building and making it available for studios and classes — and, eventually, performances, meetings, and events.

“Little by little, we had to find out how can we utilize this place and follow our dream, because we always dreamed about creating a community-based place for artists and musicians,” he explained. His daughter, a tango dancer, brought her group of dancers in house, and they volunteered to help with renovating the rooms and sanding the floors.

The restoration of a large room called the Judd Paper Hall attracted other dance and yoga groups, even while the complex’s future bistro area, where BusinessWest recently sat with Kruta, was still a dark, boarded-up storage area, with two loading docks where big trucks carried away loads of debris throughout the day. Meanwhile, the current concert venue, known as the Hub at GCA, was just a temporary stage, but was selling out shows early on.

“Now it’s growing to the point where we’re starting to attract bigger players in the game,” he noted. The next phase was renovating the upper floors — he eventually moved his studio and office up there — and making the first floor accessible for public use. “Little by little, we started to develop the second-floor cubicles, which is now the maker space.”

Those artists and makers include puppeteers, painters, costume designers, writers, jewelry makers, three nonprofits, a property-management startup, and, soon, a microbrewery. Four tenants are graduates of SPARK, Holyoke’s entrepreneurship-education and mentorship program. Gateway also houses a fully equipped woodworking shop and ceramics studio in the basement, which can be rented to whomever needs them. 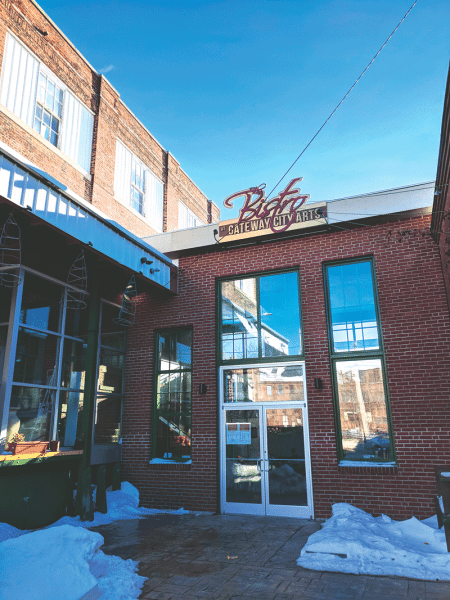 The facility’s bistro serves lunch and dinner throughout the week and a popular brunch on Sundays.

“This whole facility is about resources,” he said. “We have an instrument builder who makes guitars downstairs. There was a guy who built 500 beehives. There are small projects — if somebody just needs to come drill some holes, and they need some special piece of equipment, it’s there.”

There’s plenty of ‘there’ at Gateway, and more to come, as Kruta and Divine continue to hone their vision of the facility as a resource not only for its tenants, but for the community as a whole.

A major step toward fulfilling that vision has been the creation of a fully functional commercial kitchen, which enables Gateway to prepare much more food than before, when Kruta had access only to a tiny kitchen space.

That means the events people book in one of the three large meeting areas — which include weddings, fund-raisers, concerts, bar mitzvahs, birthday parties, memorial services, and corporate trainings — now have food service to match. Meanwhile, a restaurant on the site called Gateway City Bistro serves lunch and dinner most days, and a popular brunch on Sundays.

“We realized that, when we have concerts, we need to provide some kind of food,” Kruta said, but the kitchen benefits Gateway in other ways, too. While artist tenants thrive through shared resources and networking, food-related startups can use the kitchen to develop their own enterprises — such as Holyoke Hummus Co., which started at Gateway but now has its own location on High Street. 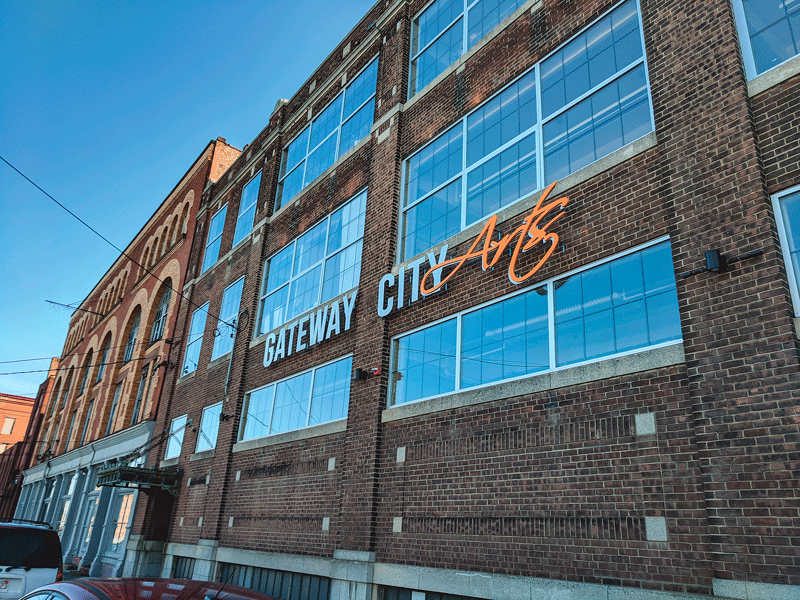 Vitek Kruta and Lori Divine saw plenty of potential in this Race Street warehouse that has now become a mecca for the arts, performances, and events.

The possibilities are endless, he continued, whether a startup is baking cookies, packaging spices, selling dumplings from a food truck, or launching a microbrewery. But the key word is ‘startup.’

“That’s the whole idea — this is a startup place for everybody. Once you become established or test your product or you can actually take it to the next level, you move out and find some other place.”

It’s often a small step from having a great idea to developing the prototype, he added, arguing that there’s no place quite like Gateway that provides that opportunity to such a wide range of entities.

Meanwhile, the concert venue, which obviously benefits from the expanded food service, now boasts a fully equipped stage with state-of-the-art lighting. A few steps away, an outdoor patio beer garden and grill area provides an opportunity to host events outdoors. And all of it takes place in a complex with a specific vibe that appeals to party bookers looking for something a little different. “Really, anything that you need space for, you can find here,” Kruta said.

Gateway’s many spaces have been used for fund-raisers as well, and some of the artistic endeavors are intended to reflect relavant civic concerns, such as an upcoming exhibit — timed for Black History Month — of 35 paintings by Robert Templeton, known for his presential portraits as well as his civil-rights-themed pieces, including a massive portrait of Martin Luther King Jr. that will be on display for the month. The art show will be complemented by concerts, panels, and discussions centered on social justice.

“This is a tool to move the community forward and address certain issues,” Kruta said. “It is very exciting. When you start to get a little understanding of the complexity of this place … it’s hard to explain, but anything is possible.”

Since they purchased the building that would become Gateway City Arts, Kruta and Divine have expanded their team to 20 employees. One of them, Cait Simpson, first arrived as an artist using the space, and now serves as the facility’s director of marketing.

“The environment they set up is so community-based and so devoted to the arts,” she said, “and as an artist coming to work here, you feel that, and you’re inspired to do more here.”

The connections that form among the artists are also valuable, Kruta noted, as they often help each other understand the entrepreneurial aspects of their trades and learn how to make a living selling their work. In return, the artists often take part in events that raise Gateway’s profile while also giving them valuable exposure. “We are fostering and developing these relationships that will only multiply the creative possibilities. That’s the idea of this place.”

In short, Kruta loves the energy he feels when he walks around the building.

“We love Holyoke, and that’s why we’re here,” he said. “You look around, and it’s incredible. We’re bringing 30,000 people here a year. We have concerts almost every week. People come here for a one-of-a-kind experience, and I think that’s what we’ve accomplished.”

Admittedly, plenty of area facilities offer, as Gateway does, a catering program, multiple halls people can rent for weddings and corporate meetings, and state-of-the-art sound equipment. “But we have a specific vibe here,” Kruta told BusinessWest. “We are artists, and we can afford to be quirky, and we want to be. We want people to come here and be like, ‘oh, look at those bricks.’

“That’s the reaction now,” he concluded. “There’s always this factor of ‘wow, I’ve never seen anything like this,’ and they walk away feeling inspired.”