Back in the Swing 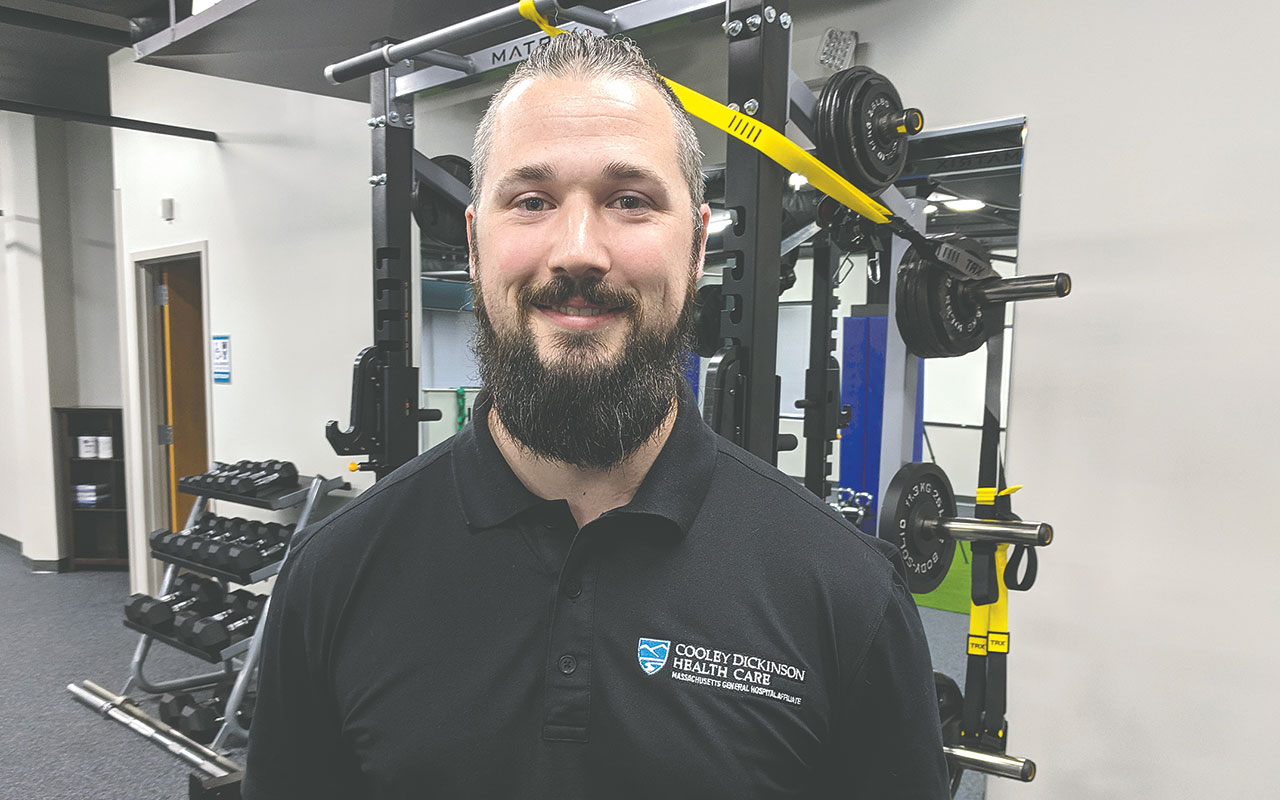 Jared Bean grew up in Hampshire County and played youth sports in Easthampton. He recalls learning about how to improve his performance and conditioning — but not how to avoid getting hurt.

“I didn’t have that education, and neither did my coaches, and I ended up with injuries,” he told BusinessWest. “Now, I want to prevent that and give some more resources to this area.”

He does that as program coordinator and certified strength and conditioning specialist at the Cooley Dickinson Wellness and Sports Performance Center in West Hatfield.

Bean, who is credentialed through the National Strength and Conditioning Assoc. (NSCA), recognized early in his career how important it was for clients to achieve pain-free movement.

“I worked in the community for a while and found my way into what I call a corrective-based training system. I came across people, both athletes and non-athletes, who had discomfort or pain in a joint while moving, so I got into the process of helping alleviate that.”

“We wanted to have a place where we can focus on keeping our community healthy, and maybe prevent a visit to the doctor or the surgeon or rehab.”

On one hand, the center — the only one of its kind in Western Mass. — helps patients in Cooley Dickinson’s rehabilitation programs by serving as a connector between post-injury rehab and real-world activity. Trainers have on-site access to Cooley Dickinson’s orthopedic providers and rehabilitation therapists to collaborate on program development, striving to create a seamless transition from rehab therapy to resumed athletic training or other activity.

“After rehab, where’s the best place to go to get that continuing work to get back to top performance?” she continued. “Then we thought, who better to do it than us? Jared knows the surgeons, he knows the therapists, he knows what we’ve been doing, so it’s a seamless recovery. That’s really what we were going for.”

But, because of its emphasis on injury prevention, it’s also a place where non-patients are welcome to work out, as they would be at any gym, while also learning proper technique. The center’s classes and programs emphasize injury prevention for athletes of all ages, as well as optimizing performance for serious athletes.

“We really wanted to offer wellness programs, and that’s why we called it the Wellness and Sports Performance Center,” Noel-Doubleday said. “We wanted to have a place where we can focus on keeping our community healthy, and maybe prevent a visit to the doctor or the surgeon or rehab. I think that’s a need in the community.”

Bean, who earned a degree in applied exercise science at Springfield College, saw friends go into athletic strength and conditioning, often working solely with athletes on one team.

“I always had an interest in trying to help a bigger variety of people,” he went on. “I’ve seen older couples that came to me because they wanted to move well enough to hang out with their grandchildren. I had a gentleman who lost a lot of neuromuscular control through disease and wanted to go to Greece for two weeks — that was the sole reason he came to see me.”

Other clients include a 63-year-old power lifter and a ju jitsu fighter in her late 30s who just signed her first professional contract. “Definitely, being here, I’m going to see a lot of variety.”

Noel-Doubleday agreed. “It depends on what the person’s goal is. Sometimes they just want to lift their grandchild up, and sometimes they want to go out and try kayaking, and their shoulder’s been bothering them. They do a little PT, and I say the next step is to see the strength and conditioning specialist. Once I’ve gotten you to feel better and move well, he’s going to really tweak it and move you to the next level. It really is the next step, and more people are looking for that.” She noted one patient who had some cervical issues, but from a physical-therapy standpoint, there wasn’t much more she could do. “He said, ‘I’d like to start lifting weights, but I don’t want to get hurt.’” So the Wellness and Sports Performance Center was ideal for that — because improper technique is common to all athletic endeavors.

“A lot of times, it’s really just faulty movement,” Bean said. “That creates imbalances in the musculature, which creates discomfort and irritation. Unless it’s addressed, it’s just going to be continued discomfort, and might progress into a larger injury.”

And when someone’s technique is poor, Noel-Doubleday said, they have to be retaught. The center will film clients engaging in certain movements — jumping, for example — and the playback clearly demonstrates what’s wrong.

“When you see it, it makes sense. I can tell someone all day they’re not landing properly, but when they visualize it, especially in slow motion, they’re like, ‘oh.’”

Jumping, in fact, is something the trainers focus on, as it’s a common mechanism for non-contact ACL injuries.

“No one wants those. That’s one of those injuries that’s really devastating to an athlete. That could be the end of their career,” she said. “And there’s no reason we should have them, ever. It’s about weakness and neuromuscular control. And we know what we need to do to prevent it. So we need to really teach that.”

That education should start young, she said, which is why the center offers an injury-prevention class for athletes ages 11-14. Attendees learn positional awareness and how to move safely throughout space, and, by increasing their balance and stability, they learn how to safety build strength, endurance, speed, and agility.

“We want to prevent those non-contact ACL injuries before they happen. We know why they happen and how to prevent it, and we want to offer people a place to learn that,” she explained. “But we also offer advanced performance for the older athletes — the high-school varsity and college player who really wants to take it to the next level, and is asking, ‘how do I condition better and build strength so I don’t get injured?’ We wanted to offer a place where it’s safe to do that.”

Other classes include adult fitness, a blend of strength, endurance, cardiovascular development, and other components of physical activity; a class designed to help those who have undergone ACL reconstruction or other hip or knee surgeries return to their sport safely by focusing on restoring strength, endurance, and mobility; and a total joint class, for individuals who have undergone total joint replacement and want to maintain joint health and function through structured training.

A Vision for the Valley

Noel-Doubleday said the center has so far seen a healthy blend of CDH rehab patients and people coming from outside the system. In either case, they benefit from the expertise available to Bean, as the center is housed in the same building as Cooley Dickinson’s Orthopedic & Sports Medicine practice, the walk-in injury clinic, and the physical- and occupational-therapy suite.

“We have rehab specialists across the hall and orthopedic surgeons and sports medicine physicians downstairs,” she said. “If he needs to touch base with somebody, he’s got a whole group of resources at his fingertips.”

As it is not a physical-therapy facility, per se, the Wellness and Sports Performance Center does not take insurance, she noted. However, clients may submit their receipts to their health-insurance company to try to get reimbursed for fitness classes and services.

“It’s exciting for our organization to embrace this vision. Nobody else is doing this,” she told BusinessWest. “We’re in the business of recovering from injury, but we’re shifting the focus to say, ‘let’s not get injured in the first place.’ We want to get our rehab patients to where they want to be, but I would love to prevent non-contact ACL injuries. I would love to not see them in the Valley at all. If we can be a part of that, to me, that’s really exciting.”