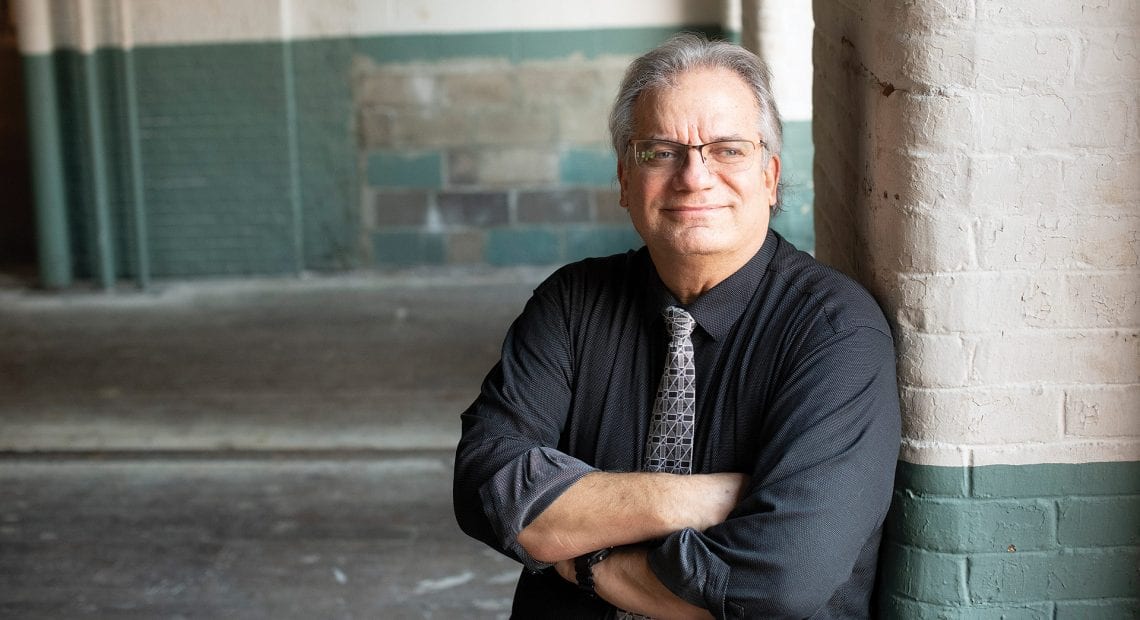 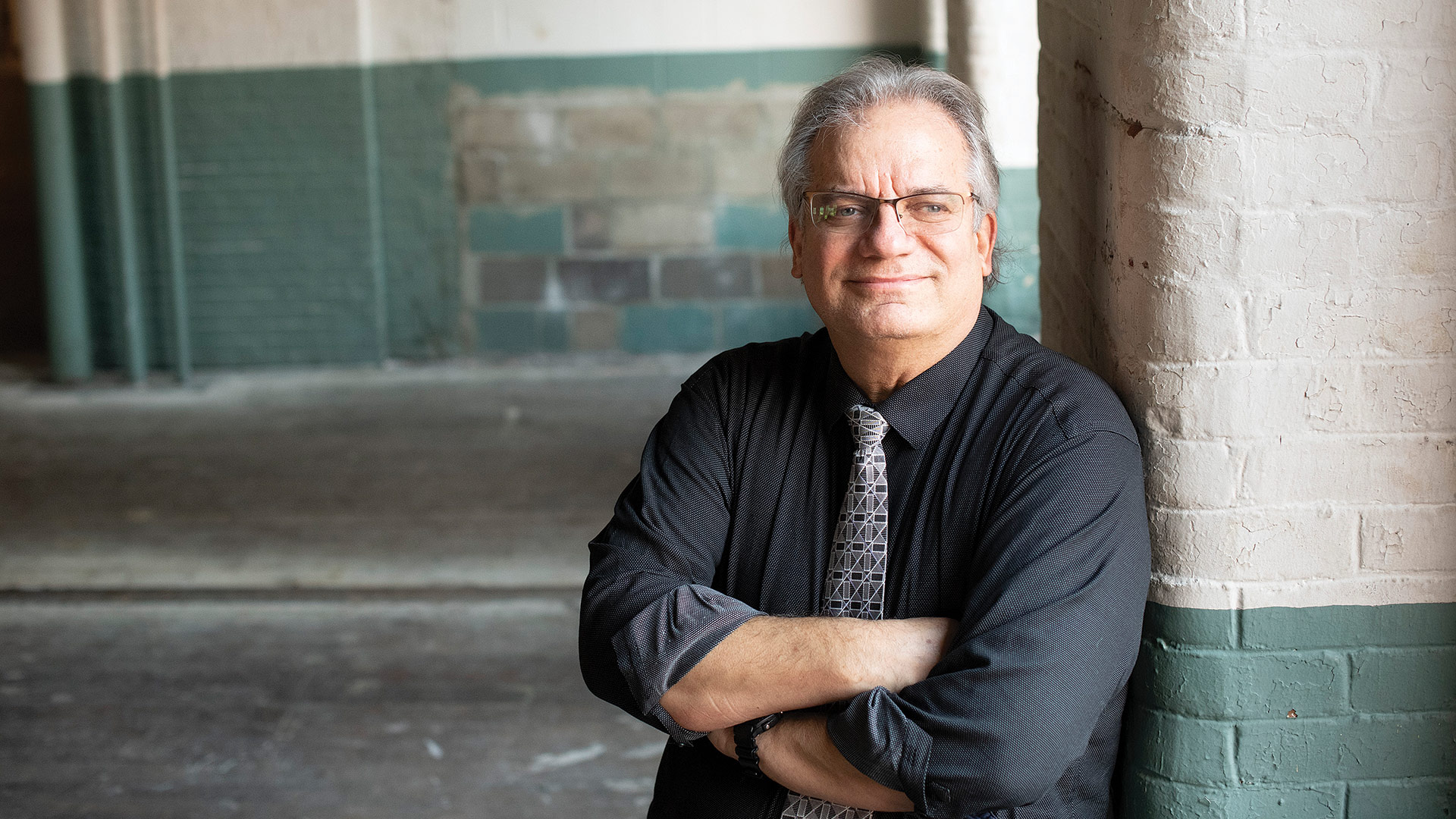 Ira Bryck started working in his family’s business — Barasch’s, a store on Long Island selling children’s clothes — when he was 5, and continued putting in hours there on weekends, after school, and during the summer through his college years.

He has a lot of memories from those days, including the fact that he generally had more money in his pocket than his friends because he was gainfully employed — even in middle school.

But he also remembers something his father — and boss; a tough boss at that — told him. Something that gnawed away at him in some respects and stayed with him as he embarked on a career path he probably couldn’t have imagined while he was folding jeans and T-shirts, one that has made him a Difference Maker.

“He told me when I was a little kid, ‘if all else fails, there’s always the family business,’” Bryck recalled. “And I took that to mean, ‘if you’re a failure, you can come work with me.’ It took a long time — several years, in fact — for me to realize that this did not mean I was a failure.”

Years later, his father’s line worked its way into a play Bryck wrote called A Tough Nut to Crack, a title chosen to reflect his father’s toughness and the difficulty of meeting monthly sales targets at the clothing store. Thus, it became one of the intriguing and imaginative methods Bryck has used for convincing those who became members of the UMass Family Business Center (now the Family Business Center of Pioneer Valley) that, like him, they weren’t failures if they joined the family enterprise.

Of course, there were other times when he helped individuals come to the realization that being part of the family business wasn’t the best idea, and that they should be doing something else. Anything else.

It’s all part of what Bryck calls ‘frank talk,’ which he still provides today, roughly six months after retiring from his role as the center’s director. He provides it as a consultant, mostly to those in family businesses, but in some other realms as well — as a speaker as various events here and in other markets, and even as the host of a weekly radio program called the Western Mass. Business Show. 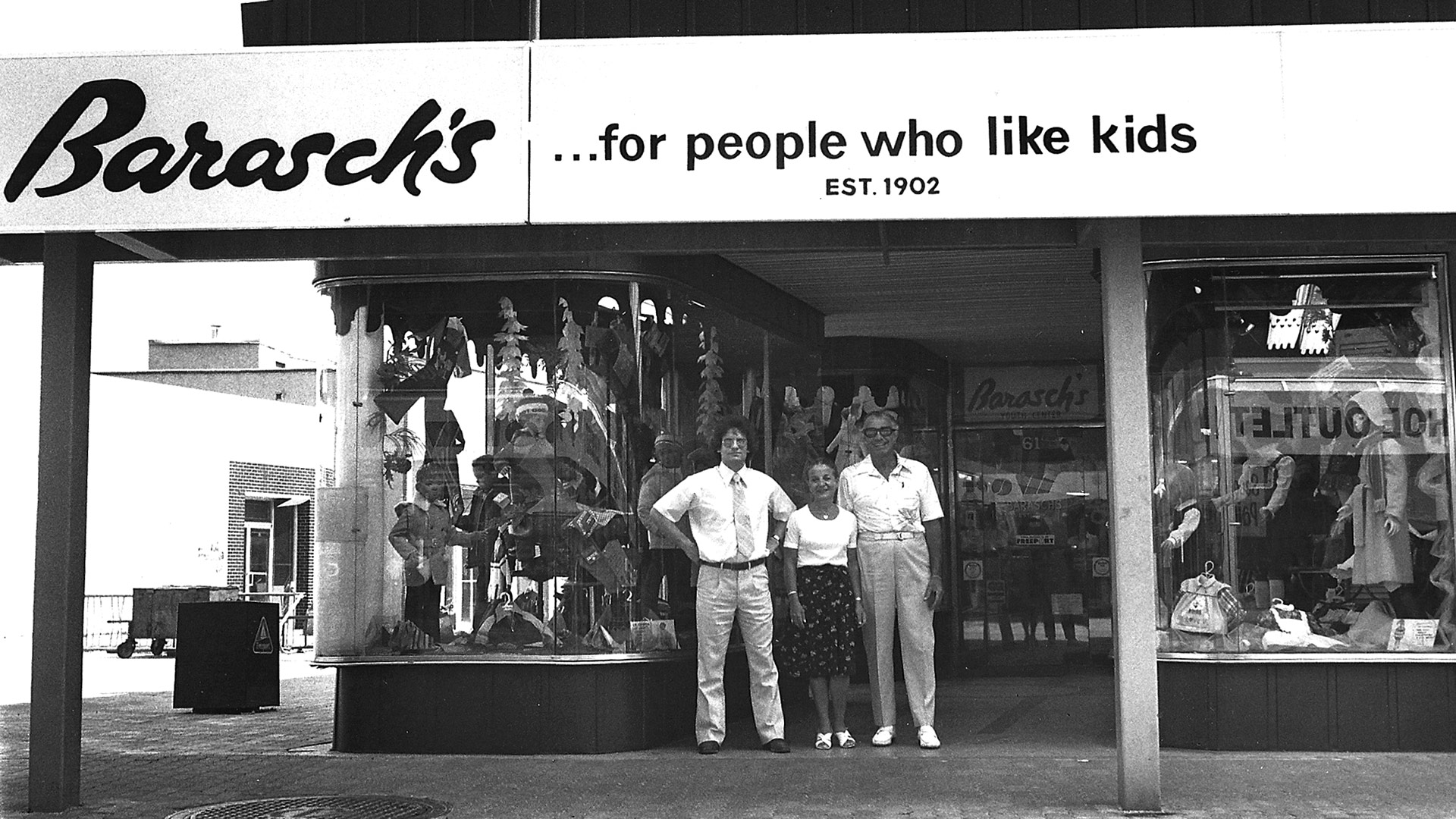 Ira Bryck is seen with his parents, Bill and Barbara, outside Barasch’s for a piece in Kids Fashions magazine published in 1977.

He is a Difference Maker not simply because of the frank talk and his ability to help those in family businesses see the light — whatever that might mean to them — but because he’s helped people become better business owners and managers and become more comfortable handling all the frank talk that accompanies those roles.

Indeed, to say that Bryck’s unique style has resonated with those he’s worked with in family businesses would be an understatement, as is made clear by comments from some members we spoke with. They refer to him as a ‘communicator,’ ‘connector,’ ‘facilitator,’ and even ‘entertainer.’ And they use adjectives such as ‘determined,’ ‘assertive,’ and ‘direct’ to indicate how he approaches his work.

“He has an approachable and entertaining and positive way to talk about many issues, even when they can be tense or controversial,” said Kari Diamond, third-generation partner of Astro Chemical, the East Longmeadow-based company led by not one but two families. “He has a way of lightening things up so you’re comfortable talking about them. He makes it fun; he makes it interesting.”

“He has an approachable and entertaining and positive way to talk about many issues, even when they can be tense or controversial. He has a way of lightening things up so you’re comfortable talking about them. He makes it fun; he makes it interesting.”

“This is a man who has a passion for what he does and is eager to both accomplish his mission and help people along the way,” she said. “He has done that with great intellect, the ‘connector spirit,’ and love.”

Those sentiments make it clear why he’s been chosen as one of BusinessWest’s Difference Makers for 2020.

In 1977, Kids Fashions traveled to Long Island to do what turned into a cover story on Barasch’s. While noting that the landmark was the oldest children’s clothing store in the country, the magazine described it as “well-organized clutter.”

“Which we all felt great about,” said Bryck, who can be seen with his parents — Bill and Barbara — standing in front of the store in one of the photos from the article. The piece came not long after he ran a “hippie K-6 free school” after graduating from SUNY Buffalo and eventually decided to return to the family business for what he thought would be the summer — or until he figured out what he was going to do next.

“That summer lasted 17 years,” he said with a laugh, noting that, at one point, he was the president, the tailor, and the window dresser for this venture all at the same time.

And while he managed in all those roles, Barasch’s ultimately couldn’t survive all the many forms of competition it faced, and Bryck oversaw its closing in 1993.

Soon after, he moved to Amherst and started looking for gainful employment.

“I didn’t know what I was going to do,” he said, adding that a high-school friend from Northampton saw an ad in the Daily Hampshire Gazette seeking someone to lead the recently created UMass Family Business Center. While the job had essentially been given to someone else, he was granted an interview anyway, and that interview changed the course of the center — and a number of businesses in the area as well.

“They hired me and unhired him,” Bryck said of what became a somewhat controversial hiring. “And he called me the next day and said, ‘I want to buy lunch for the bastard that stole my job.’ And that’s how we became friends.”

The UMass program, the 12th in the country at a time when such centers were gaining in popularity, had a number of large companies as members in the beginning, such as Peter Pan, Big Y, and American Saw.

“But they never came to the meetings anyway,” said Bryck, adding that, over the years, the center’s membership came to be dominated by small to mid-sized companies across all sectors, but especially manufacturing and construction. Collectively, they were grappling with the many issues common to all businesses, and some that are unique to family businesses.

“It’s one thing to read a paper from a professor who deals in theory, but is that reality? Can that be applied to the everyday businessperson? Ira was able to translate those kinds of things.”

To showcase them — and create an effective dialogue about them — Bryck created a host of imaginative programs and learning opportunities. These included plays — in addition to A Tough Nut to Crack, there was also Wait Till Your Father Gets Home and The Perils of Pauline’s Family Business — as well as dinner meetings with insightful speakers and roundtables that had a specific set of rules, right down to attendees being forbidden from telling their spouses what was said.

“You couldn’t even go up to the person after it was over and say, ‘I had another thought about that,’” he explained. “You’re able to have this conversation in that time and space, and they were very helpful.

“I’m a big fan of roundtables, where you get a bunch of people who are listening well to someone’s challenge and asking good questions and helping them think it through,” he went on. “I think that’s probably been the highest and best teaching that we’ve done.”

As for the plays, they’ve been performed at family business centers and other venues across the country and around the world, he said, noting that A Tough Nut to Crack was recently presented by a group in Catalonia, Spain. And they’ve become a different, very effective way of presenting — and, again, creating a dialogue about — issues facing family business.

With each learning opportunity he created, the goal was always to give attendees something they could bring to the office or the plant the next day. Bryck calls them “gems.”

As he talked about family businesses and helping to resolve issues and conflicts within them, Bryck first compared such companies to snowflakes — “no two are alike” — and then summoned that famous opening line from Tolstoy’s Anna Karenina: “All happy families are alike; each unhappy family is unhappy in its own way.”

“No two tragedies are the same, but you start to see patterns,” said Bryck, who, as director of the family business center and a consultant, has always addressed these patterns with creativity, that entertaining style that Diamond mentioned, and a tenacity that became the subject of a number of jokes at the Family Business Center’s 25th anniversary last fall, which doubled as a passing of the torch from Bryck to current Executive Director Jessi Kirley.

Steve Neveu, second-generation principal of Notch Mechanical Constructors in Chicopee, describes Bryck as a resource and a “connector.”

“Whenever I had an issue or something to talk out, he was a great listener,” he said. “And he’d point me toward other people that might be helpful. He knew a lot of people, not just other businesses owners, but consultants and experts in related fields; he’s a great resource.”

Diamond agreed, and said Bryck, while providing learning opportunities for others, has a thirst for learning himself, and this is reflected in what he brings to the table — whatever table that might be.

“While many people think of him as an expert in this field, that doesn’t stop him from exploring new things,” she noted. “When you’re around him, he’s always saying, ‘I was listening to this podcast,’ or ‘I was reading this book, and this is a really good concept,’ or ‘this might be theoretical, but I can see how it can be applied by doing XYZ.’

“He can take things that are very theoretical and make them realistic,” she went on. “It’s one thing to read a paper from a professor who deals in theory, but is that reality? Can that be applied to the everyday businessperson? Ira was able to translate those kinds of things.”

Olesuk concurred, and said that, through Graduate’s membership in the FBC and her interaction with Bryck, she been able to develop new business relationships and, more importantly, continue to learn and develop as a business owner.

“He’s created a unique, creative, and holistic approach to supporting family and independent business owners,” she said, adding that this model has continued with the transition to Kirley.

Bryck was quick to note that, while his father voiced that opinion — the one about working in the family business “if all else fails” — more than a half-century ago, those thought patterns — and, indeed, a stigma about working for one’s parents — still exist today.

But for some, this is the path they want to take. It’s not an easy road to get on and stay on, but Bryck, through his unique learning tools, has helped keep them on track.

And pretty much all those who have learned from him — and with him — have said the same as Diamond. “He makes it fun. He makes it interesting.” 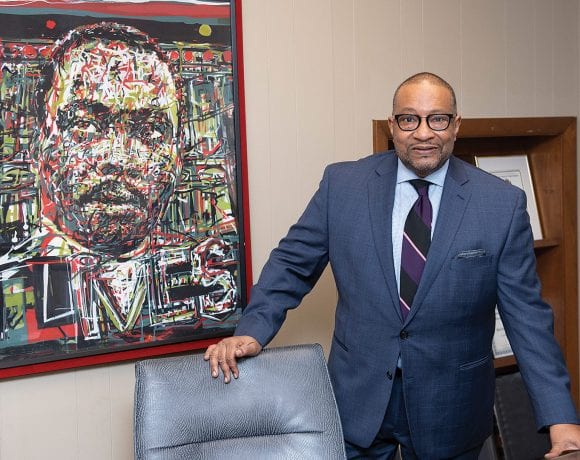 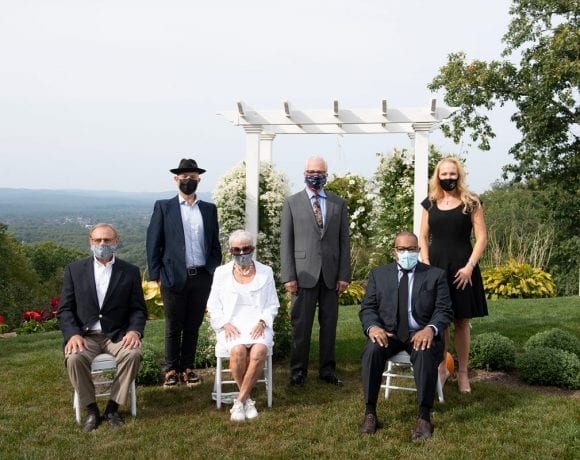