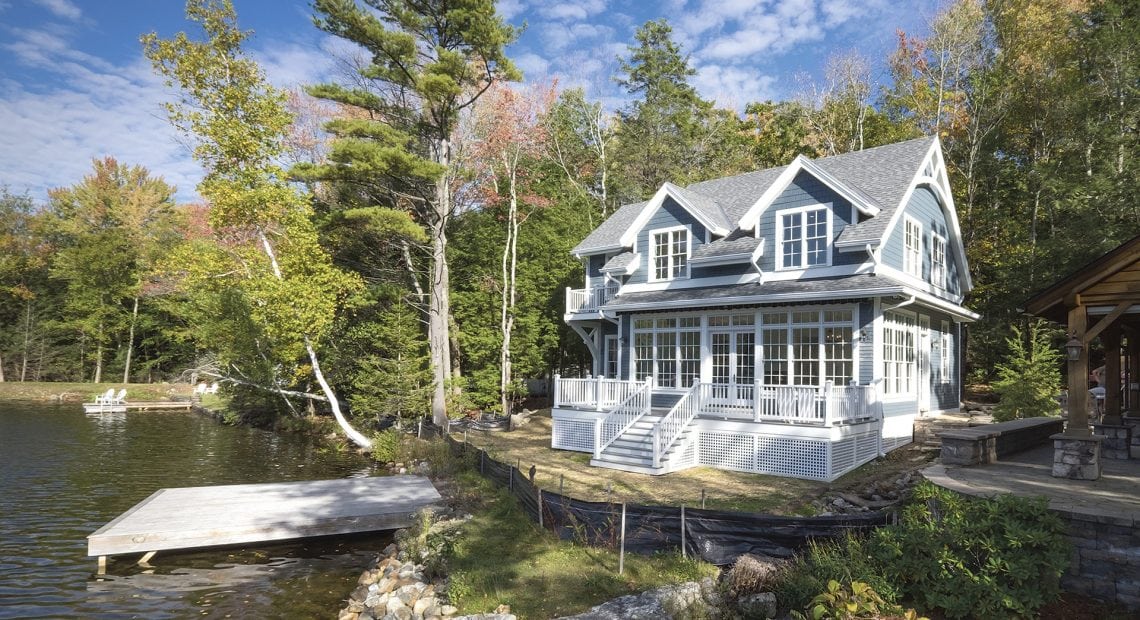 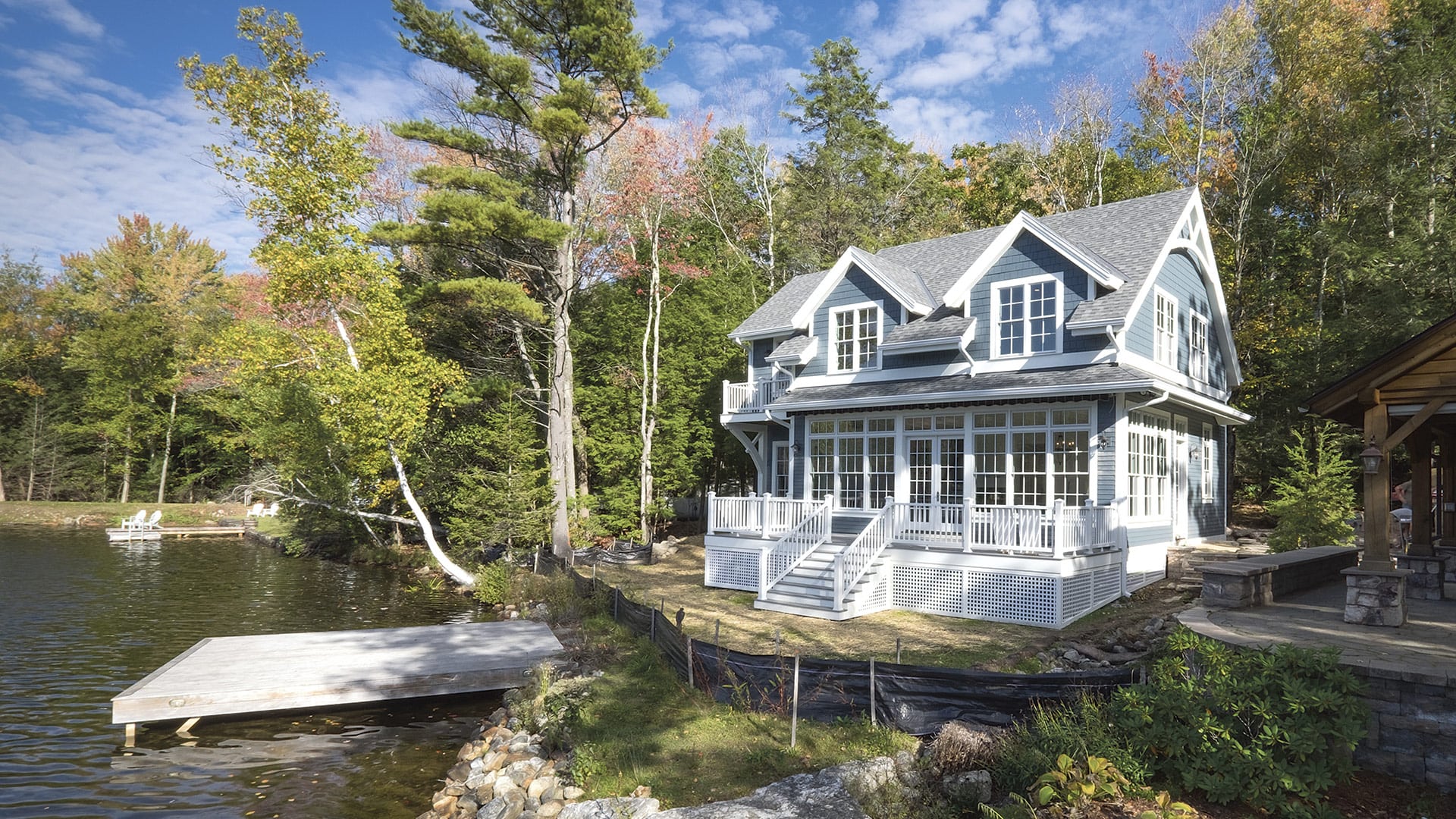 This lake home in Westhampton is one of the many projects in Keiter Builders’ portfolio of residential projects.

While earning his master’s degree in finance at the University of Rhode Island, Scott Keiter wasn’t thinking about using it to manage his own construction company. But after a dose of the ‘real world,’ as he called it, while working for an insurance company, his passion for carpentry took his career in a completely different direction. In a short decade, Keiter Builders has constructed a solid business foundation and a diverse portfolio of projects across several disciplines.

Scott Keiter likes to say his company is what he calls “a typical Valley builder.”

By that, he means it is relatively small, at least when compared to outfits in larger cities, boasts a diverse portfolio — out of necessity and good business sense more than anything else — is agile, and also always looking to add new disciplines to the equation.

Florence-based Keiter Builders is quite atypical, however, in that it is a first-generation company, started just 10 years ago, almost at the height of the Great Recession (we’ll get back to that challenge later), and therefore doesn’t have a long history. 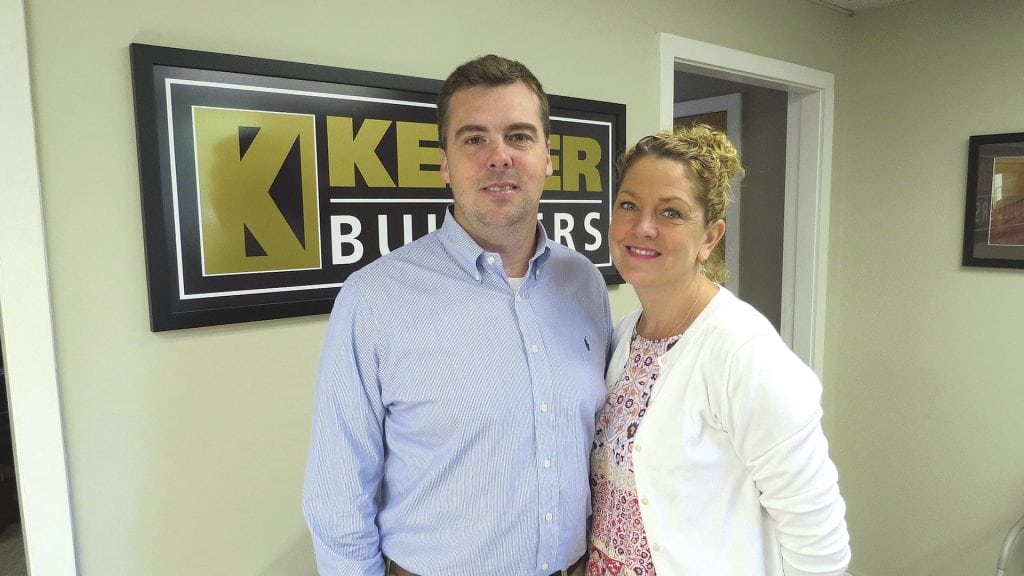 There isn’t any of that Keiter Builders, said Scott, who noted that his father is an aerospace engineer and he himself earned a master’s degree in economics at the University of Rhode Island, and while he was earning it, thoughts of putting it to use to manage his own construction company rarely, if ever, entered his mind.

However, and this is a big ‘however,’ Keiter worked as a carpenter during the summer while in high school and college, developed somewhat of a passion for building, and stayed in touch with the industry throughout his education.

“I tried different careers, and between my bachelor’s degree and my master’s degree, I went to work for State Farm Insurance in auto claims — that was my introduction to the real world,” he said. “Which wasn’t for me; when I got my master’s degree, I decided I needed a break and went back to carpentry.”

To move the story along, things “progressed,” as he put it, deploying a word he would use early and often, and Keiter Builders started to establish a foothold and begin its transformation into, well, a typical Valley builder.

Today, as noted, it is diverse, specializing in commercial, residential, and institutional work, with clients including Smith College and Amherst College, a number of smaller businesses in and around Paradise City, and the city of Northampton itself — Keiter is currently handling a number of projects within Look Park, for example.

As much as Scott Keiter is into building dwellings, commercial spaces, and softball diamonds, among other things, right now he’s mostly engaged in building his business, a process that, like most, he finds enjoyable, but also quite challenging, given the pressures of what comes day to day.

“One of my challenges is looking ahead,” he explained. “You’re just so busy as a small-business owner, it takes everything you’ve got just to get through the day, but you need to focus on tomorrow as well as today.”

With that in mind, he wants to continuously expand the portfolio, and he’s doing that through various initiatives, everything from investments in the ‘heavy construction division,’ as he called it, which is pursuing subsurface utility work, trenching, and heavy civil projects, to efforts toward gaining certification to handle work for the state Division of Capital Asset Management and Maintenance, or DCAM, which would enable it to pick up work at UMass Amherst and other state-run facilities (more on all that later).

For this issue and its focus on construction, BusinessWest turns the spotlight on Keiter Builders, a comparatively young firm that has constructed a solid business foundation and is looking to continue building upon it.

As part of those business-building efforts he described, Keiter said the company has become more aggressive in its efforts to promote its brand.

Like most all builders, large and small, word-of-mouth referrals have always been the most effective marketing tool, but the company has added another component with a slick promotional brochure that Keiter and his staff, including his wife, Jill, invested considerable time and energy in and are quite proud of.

This booklet does a very effective job of explaining the company’s depth and agility — or that ‘progression,’ as Keiter described it, while detailing not only what it does, but also, and perhaps more importantly, how.

Indeed, it devotes pages to the firm’s work to carefully develop a sound pre-construction strategy and manage the construction process and meet the most fundamental of objectives in this highly competitive business — finishing on time and to the specifications set by the client.

But it mostly focuses on wide array of projects in the portfolio.

That list includes everything from a telescope observatory dome at Smith College to the memorial fountain at Look Park; from the Valentine Hall rooftop deck at Amherst College to the work at Roberto’s restaurant in Northampton; from the new Northampton offices of the law firm Bacon Wilson to the Convino Wine Bar in Thornes Marketplace.

It also includes an addition and renovation to the optical studios almost directly across Main Street in Florence from the Keiter offices, as well as a host of new homes, remodelings, and additions.

Overall, that brochure shows a great deal of progression in a decade and how quickly the company has been able to establish itself within this market.

And remember, it started at the height of the recession. Well, sort of.

“We weren’t really a construction company at that time,” said Keiter, adding that the enterprise amounted to him handling a wide array of carpentry work. “We went out and just built a network of clients, and kept at it.”

By that he meant, well, a lot of things, including taking whatever jobs he could get, eventually adding his first employee and then more as the project list grew — “we’re really fortunate to have an excellent group of craftsmen working for us” — and lots of hard work building the solid relationships that are the very bedrock of this sector. 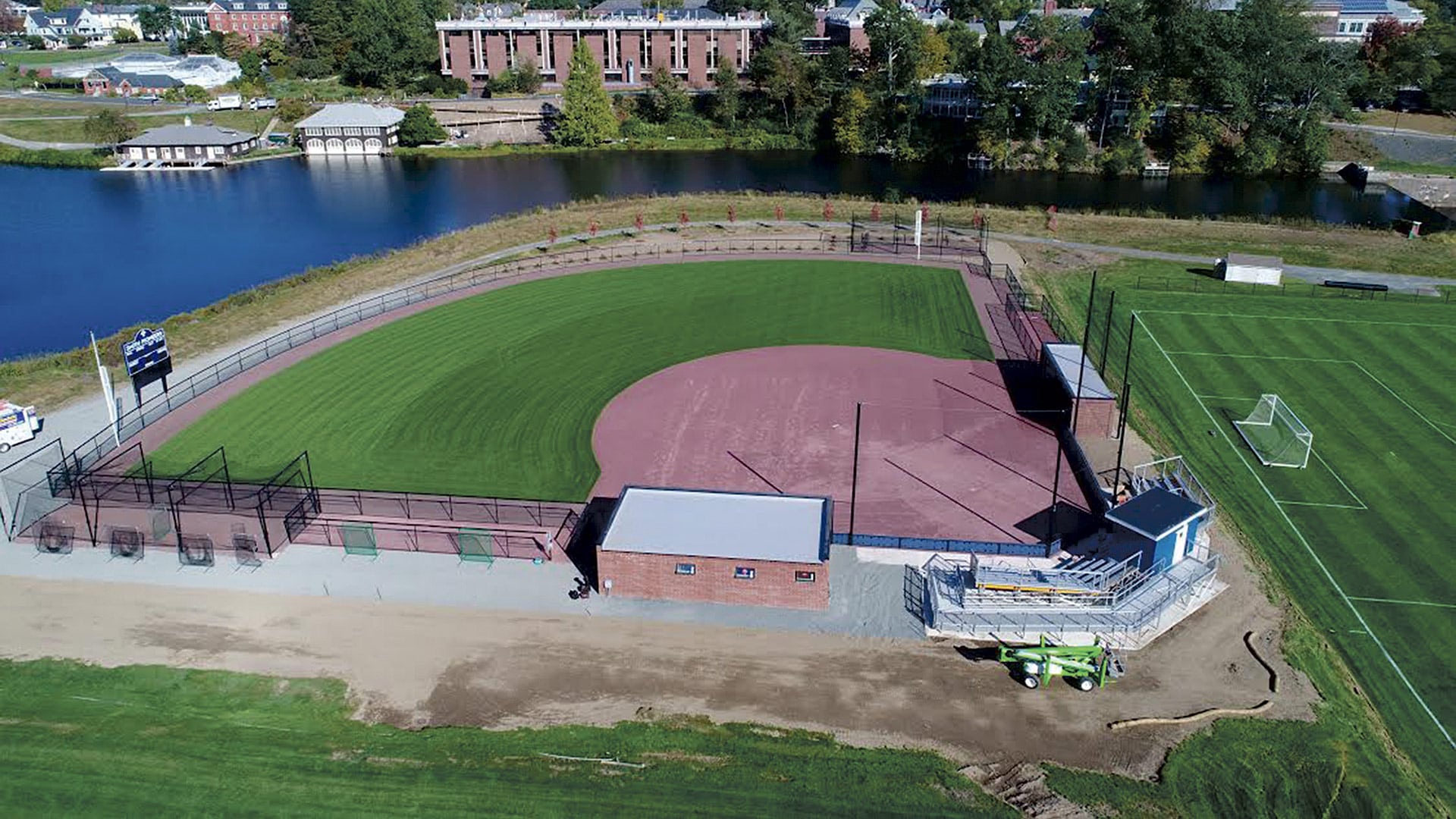 The softball field at Smith College

This relationship-building ability is clearly evident in the list of projects the company is currently handling, including several smaller initiatives at both Smith and Amherst Colleges, for which Keiter has already handled a number of assignments, and ongoing work at Look Park — which is in the midst of a comprehensive capital-improvement project. Renovation of Pines Theater is among the current initiatives.

There are a also a few residential projects ongoing, as well as a new building to support teen housing being developed by a Greenfield-based group called Dial/Self, said Keiter, adding that the company continues to build on the relationships it has forged in its early years while also establishing new ones.

“I don’t think there’s a defining moment over the past 10 years when it comes to how we’ve arrived here,” Keiter explained. “We try to take a long-term approach to our work as it relates to the quality, but also the relationships, and that’s really paid off for us.”

He offered Smith College as an example.

“We’ve been working with them for about six years,” he explained. “We started off doing very small projects, and we’ve just earned their respect and worked our way up to being involved with larger projects. As a first-generation company, we have to consistently prove our value.”

The company currently handles work within a relatively small geographic radius — roughly 15 miles from its Florence base, by Keiter’s estimates — but it is looking to expand that reach as well as its list of core competencies. 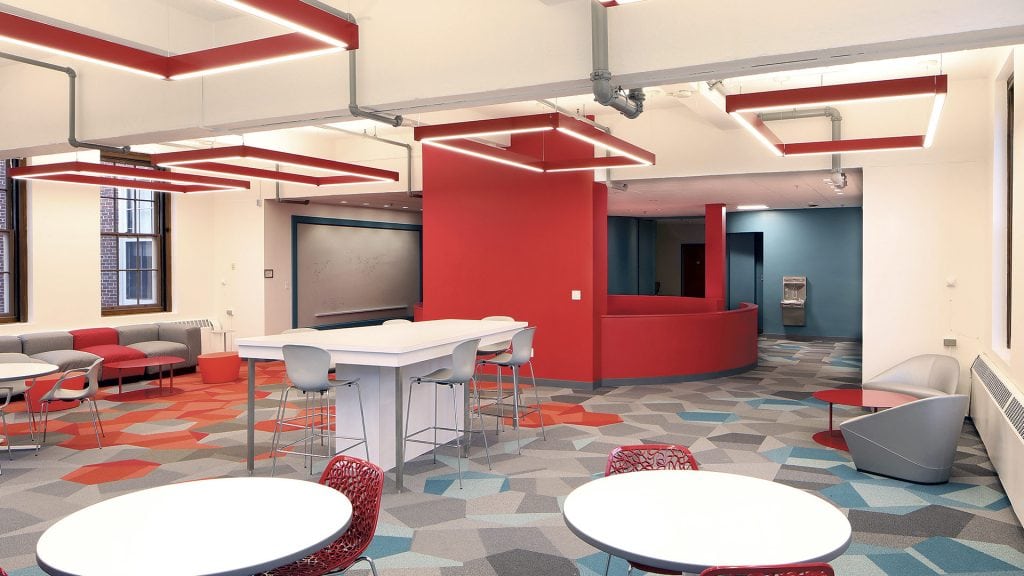 Keiter Builders handled renovations of the common area at Amherst College, one of its many institutional clients.

Indeed, Keiter, as noted, is currently investing in a heavy-construction division — a subsidiary of the company, actually — based in Hatfield. This division pursues work with utilities and larger contractors and focus on excavating, trenching, and site work, and it has been growing steadily, said Keiter.

Such diversification is important, especially for a sector so profoundly impacted by downturns in the economy.

“We need to stay engaged in many different disciplines,” he explained. “Sometimes, when commercial or institutional is a little slow, the residential fills the gaps. We really enjoy all the different kinds of projects; it keeps us sharp.”

Meanwhile, the company now owns a number of properties in the Northampton area and will look to develop them, said Keiter, adding that he’s eyeing a mix of commercial and residential development opportunities.

Then there’s the process of becoming DCAM-certified, which, Keiter said, should open a number of doors, including the large one involving UMass Amherst.

“We’re starting to enter the public arena,” he told BusinessWest, adding that DCAM certification should be a catalyst for growth within the heavy-construction division as well as the traditional contracting side of the venture.

Keiter, who has young children, said that someday, maybe his company can be one of those that boasts multiple generations of ownership and a half-century of history.

“I really enjoy building the business — it’s a pleasure to build a legacy,” he explained. “My hope is that maybe, sometime down the line, there will be a second generation.”

For now, he’s focused on that business- and legacy-building process, and said the formula for doing that is pretty straightforward.

“You have to keep grinding and building a reputation,” he explained. “And in our industry, there are no shortcuts to doing that.”

Indeed, there’s just hard work — on the job site and in creating and strengthening relationships. And success in those realms has enabled Keiter to come a in way in a short decade.