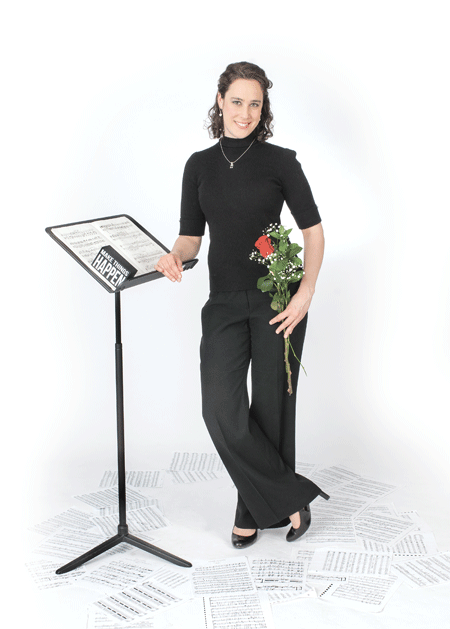 “As soon as I felt the keys under my hand, I fell in love with music,” she said. “I always wanted to be a musician, loved to sing, and loved music lessons in school.”

Since then, music and education have played major roles in Hagon’s life. The Hartford resident taught piano for a decade before becoming the vocal music director for Minnechaug Regional High School last August. There, she directs three choirs, teaches the history of pop music and guitar, and is faculty advisor for the a cappella group Vocal Vibe, which has performed in many venues.

Hagon has performed extensively herself in the U.S., Spain, England, Belgium, Italy, Mexico, and Portugal; is part of the piano duo Belo Som, which released a CD of Brazilian and Argentine music last summer; and leads an adult choir at Christ the King Lutheran Church in Wilbraham.

She became minister of music there while earning her master’s degree at the Hartt School in Hartford, which led to her civic leadership in Western Mass. She founded and directed the Girls Inc. Chorus in Holyoke and was vocal music director for the Children’s Chorus of Springfield until 2012. She also founded and directs the Veritas Children’s Chorus at Springfield’s Veritas Preparatory Charter School.

“I love watching kids learn music, build confidence, perform, and feel empowered by it; it’s really powerful to be part of the process,” she said.

Five years ago, Hagon founded and organized the Joy of Music concert series in Wilbraham, which has brought world-class musicians to the area and generated funds for local nonprofits. She is also co-founder and organizer of the Springfield Unity Festival Chorus and is looking forward to its October festival at Symphony Hall, aimed at promoting diversity and racial harmony through the arts.

Hagon has won many awards and loves making a noteworthy difference in people’s lives. “Music has a way of connecting people and helping us remember that we are all human,” she said. “And if it is part of someone’s childhood, they can create an adult community that values the arts.”