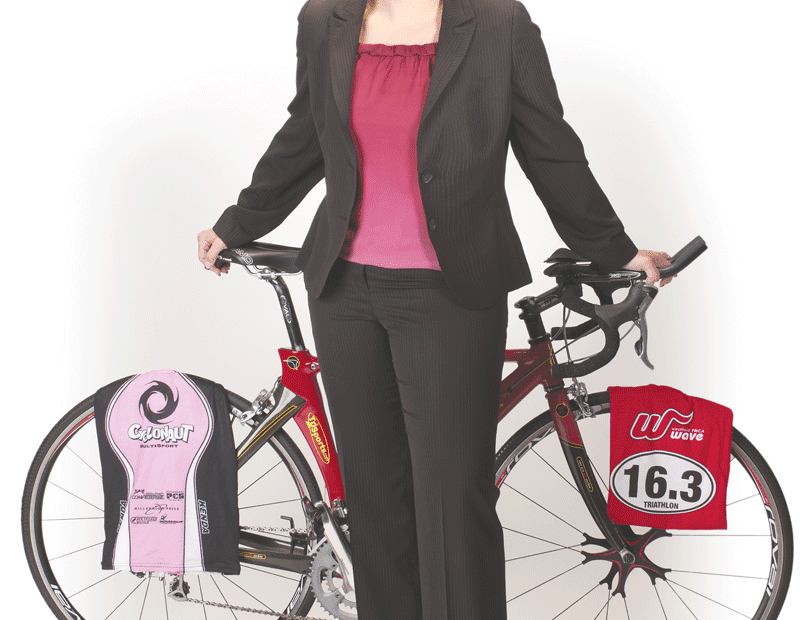 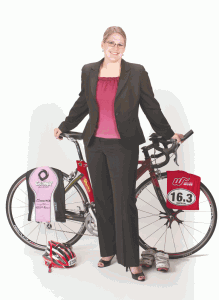 Lisa Totz had her 40 Under Forty portrait taken on her bicycle while wearing a business suit. Such imagery, conveying both dedication and physical prowess, would seem appropriate for someone who competes in triathlons and has the words ‘black belt’ included in her job title.
But she laughed when explaining what’s behind the words printed on her business card. “Basically a black belt is someone who is a change agent,” she said, “someone working to improve things around the company.”
And what a change she has made.
For 35 years, ITT had been a paper-based company, with all of its data analysis recorded in print. “That process is so wasteful, though,” she said, “because, first, someone has to analyze all that data, and second, it’s on reams and reams of paper.”
So, as a test engineer, Totz took her data-collections role and transformed it into ‘architect’ for an interfaced, electronic test-data collection system. It’s a technical approach to solving the inefficiency created by all that paper, and, using simple terms, she said it “changes how ITT Power Solutions functions.”
And with one look at what Totz does in her free time, it’s easy to see that efficiency is key to making time for all of her pursuits. Over the years, she’s volunteered time, energy, and imagination to such groups and causes as the Jimmy Fund, the Juvenile Diabetes Research Foundation, Griffin’s Friends, ITT Watermark, the company’s corporate philanthropy program (which she’s served as site ambassador), and the Wave Triathlon, which she founded in 2009 to benefit the Westfield YMCA Wave Swim Team.
It was for her efforts with the triathlon, which has growing steadily in terms of participation and funds raised, that she received the Westfield YMCA’s Spirit Award, which she counts among the accomplishments of which she is most proud.
A five-time Ironman triathlete, Totz noted that “youths don’t have a lot of good role models these days.” But, through the work she’s done on the job and within the community, she has certainly become one.
— Dan Chase
Tags:

Introducing the Class of 2017