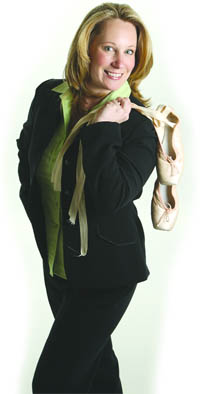 Securing an executive director’s position at 31 is a feat that requires discipline, drive, and balance.

Michelle Theroux, executive director of Child and Family Services of Pioneer Valley, says she acquired those traits earlier than most, through the rigors of dance practice and performance. Theroux began studying tap, jazz, and ballet at age 5, and added dance instruction to her repertoire when she was 16. Some exciting years followed, when she was asked to tour nationally in a jazz-based children’s show. For five years, Theroux jetted around the country on weekends and during school vacations, while working toward two bachelor’s degrees at Assumption College, in Psychology and Political Science.

She mulled careers in psychology and law before realizing her passion and strengths lay in human services. And while dance remains an important focus, Theroux said life as a professional performer was something she outgrew when her touring years ended.

“Those are experiences I will never be able to replicate,” she said. “But on a full-time basis, living from audition to audition … that part of the life never appealed to me.”

What did appeal to her were the opportunities to see the world and expand her knowledge base in her late teens and early twenties, as well as the strength of will and of mind she acquired. “I think studying the arts in general provides a lot of discipline,” she said, “and when I started to be pulled more into the human services field, I realized that my life experiences were going to help me.”

Theroux has previously worked as a clinical supervisor at the Gandara Center of Springfield, and later with the regional family services agency The Key Program, as a senior manager. Theroux took on her role at Child and Family Services last year. This is a nonprofit agency with many moving parts, offering counseling and assistance for families, people with disabilities, and immigrants and refugees, among other groups.

In addition, she serves as an adjunct professor within the Psychology Department at Springfield College, and continues to teach dance to children.

“Now, dance is sort of my balancing piece,” she said. “It evens out stress. Still, in my life, sleep is optional.”