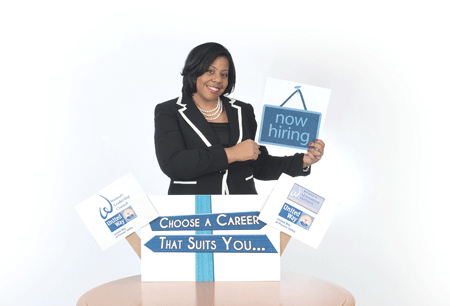 Nicole Griffin’s beliefs have played an important role in her career. They begin with her faith in God, love for people, and conviction “that we are commissioned to serve others” — beliefs that were strengthened when someone helped her land a job interview at MassMutual.

“I got the job and am so thankful for what I have. The door was opened for me, so opening doors for others has been the model for my life,” said the founder of Griffin Staffing Network and Springfield Mustard Seed, a club that helps startup companies and entrepreneurs obtain the resources they need to become successful.

Griffin, who is married with two children, spent 12 years in the insurance industry before launching her own business. She began in MassMutual’s contracting department, was promoted several times, earned numerous awards, and created a task force to help departments work together in a productive manner.

From there, she moved to an underwriting position at Phoenix Insurance in Hartford, then returned to MassMutual.

During a volunteer stint with Junior Achievement, a student who didn’t know how to dress for a job interview inspired her to become a certified job interviewer, then open ABC Interviewing Co., which she ran part-time. The work was fulfilling, but not profitable. “I loved watching people grow, but wanted to do more,” she said.

Volunteer work at St. John’s Congregational Church in Springfield had sparked Griffin’s interest in human resources, and in 2010, she left the insurance industry and opened her own staffing agency, where she helps teens and adults acquire job-related skills and find temporary and permanent employment.

In 2012, she founded Springfield Mustard Seed in response to clients who wanted to become entrepreneurs. She is also a board member of Intercity Youth Inc. and Springfield Preservation Trust, and a member of the 2014 United Way Women’s Leadership Council Steering Committee and the Order of the Eastern Star. She was event coordinator for the Save Our Springfield Block Party in 2012 and served on the W.E.B. Dubois Committee in 2011 and 2012.

“I’m amazed at where I am,” she said. “But you only become successful when you help others.”