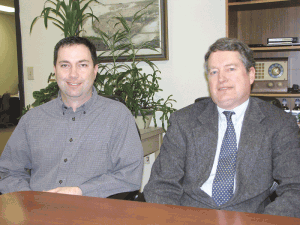 Peter DeMallie (right, with Ben Wheeler) says factors like ADA compliance and ecological concerns have made landscape architecture more complex over the years.

Peter DeMallie says some people have an image of landscape architects hauling potted plants and bags of mulch into a torn-up backyard.
“Landscape architecture is not just selecting plant species and outlining them on a map of the property,” said DeMallie, president of Design Professionals Inc. “That’s a very small component of what landscape architects do.”
Rather, the projects his company tackles tend to be much larger in scale, with significant elements of civil engineering, site planning, and land surveying, some of the other specialties of this South Windsor, Conn.-based firm.
“The crux of our landscape-architecure business supports our other disciplines, our civil-engineering and land-surveying business, and most of that work is for commercial and industrial clients,” said Benjamin Wheeler, a landscape architect and director of Operations for the company.
Design Professionals, which celebrated 25 years in business last year, has worked on more than 2,500 projects in more than 120 communities in Connecticut, Massachusetts, and Rhode Island, encompassing residential, retail, office, and industrial sites, as well as schools, churches, parks and sports fields, and municipal facilities.
“We average 100 new projects a year, and that’s over all disciplines,” DeMallie said. “Not all those have a landscape-architecture component, but a large number of them do.
“We aren’t the type of firm that goes into somebody’s backyard,” he added, before correcting himself somewhat and detailing some relatively larger-scale residential jobs. “They’re primarily high-end residences looking for professional designs in and around the pool, associated landscaping, waterfalls … we can do that, but typically for the higher-end market.”
In fact, residential work used to be a larger portion of the business, before the housing market collapsed in 2008 and launched the Great Recession.
“The demand for services dropped off appreciably during the recession, and even after the official recession end. The economic impact to our business, to the design marketplace, was heavily impacted,” DeMallie said.
Many anticipated projects were backlogged, he explained, and residential work in particular suffered; “as for single-family subdivisions, we have worked on one in the last three years. Forty percent of our business used to be residential; now it’s probably under 20%.”
Still, Design Professionals has stayed busy with projects ranging from a Fedex Ground distribution center in South Windsor to the design of the Farmington Sports Arena, which features a mix both natural- and artificial-surface fields.
DeMallie and Wheeler recently sat down with BusinessWest to talk about how the company has grown over the past quarter-century, and particularly how the business of landscape architecture has changed over that time. It’s a complicated field, to be sure, even though the outcome is often fun and games.

Green Acres
One current job that is strictly a landscape-architecture project involves extensive work at South Windsor High School, bringing the grounds and athletic fields up to code, including handicapped access under the Americans with Disabilities Act.
“ADA compliance is a component of every single project now, whether public or private sector, whether it’s an educational facility, police station, industrial facility, office space, you name it,” said DeMallie. “It’s one of the many challenges for every site.”
Another major shift has been the increasing prominence of ecological concerns over the past few decades, and the expanding maze of regulatory hassles that surround those issues.
“Environmentally, if you think back as late as the 1960s or even the 1970s, wetlands was not a major factor,” he noted. “But preservation of inland wetlands has grown — the recognition of those sites as important environmental assets. Wetlands on site or adjacent to the site have become a major issue. The idea is to avoid the impact of wetlands, but if it can’t be avoided, you must minimize the impacts and justify the impacts.”
“Erosion control and sedimentation control were an afterthought years ago,” he added. “Now it’s standard operating procedure.”
He laughed when he evoked the pre-1970 view of filling in a wetland as a positive thing — “you were just removing mosquitoes. It has changed a lot.”
Wheeler said “low-impact development” has become a watchword, and referred to a retail project in Easthampton, Conn. that was approved under new local parking-lot regulations. One component of those guidelines is that stormwater runoff is directed into ‘rain gardens’ rather than into underground systems. “The gardens are planted with material that’s appropriate and can tolerate both moist and dry conditions.”
The benefit, he explained, has to do with keeping runoff, which may contain anything from fertilizers to debris from the metals on cars, out of the municipal water system.
“Another trend in site design, also part of the green movement, is that you’re seeing more use of LED lighting for [outdoor] fixtures,” he explained. “The technology is those is rapidly improving, so much that I think, in a very few years, we’re going to see even more extensive use of LED lights for site lighting. We’re not quite there in all projects, but in certain situations, it does make sense.”
DeMallie noted that the costs of such amenities are coming down as well, and site owners are always looking to affect the bottom line.
“You can save a lot on energy efficiency,” Wheeler said. “You spent more on the install, but there’s a long-term return on investment.”

Breaking New Ground
The sheer range of the firm’s portfolio is impressive. “Every retail development has a landscape-architecture component,” DeMallie said. A good example is Buckland Commons in South Windsor, a two-building project in South Windsor that includes a bank, retail space, and offices.
“As a landscape architect, I worked to develop multiple concepts for the property, and after one concept was selected, we moved forward with the local approval process,” Wheeler explained. “The site design included signage, determining plant species and their proper location, also a decorative screening wall. I also helped determine the appropriate amount of lighting for the site and worked closely with soil scientists to come up with a wetland mitigation plan, because there was some direct wetland impact with that project.”
That’s a good example of the range of skill sets that go into many commercial, industrial, and municipal projects — it’s no surprise that the Landscape Architecture program at Ohio State University, where Wheeler earned his degree, is housed in the School of Engineering. “It’s a pretty diverse profession,” he said. “I’m constantly working with engineers and surveyors on projects.”
But, again, not as many residential projects as in the past. DeMallie said it’s not just the housing market that has impacted that side of the business, but inadequate long-term planning by communities, with plenty of McMansions and over-55 housing erected over the past decade or two, but not nearly enough affordable homes for young professionals.
“That’s one of the problems in the Hartford and Springfield area,” he said. “The farther you go out from Hartford and Springfield, beyond the heavily urbanized city and suburban areas, as you get into the exurban areas, there’s still land available — but most don’t have full utilities to support it.
“It’s no surprise to anyone that this region has lost some of its young workforce, and one reason is that we don’t have the housing projects to meet their desires and needs, as well as affordable mass transit. It affects our ability as an employer to attract and retain employees with the skill sets we want.”
Still, the company has navigated changes in its industry before, and will continue to do so as the impact of the recession begins to lift. After all, the landscape is always changing — and Design Professionals continues to shape it.