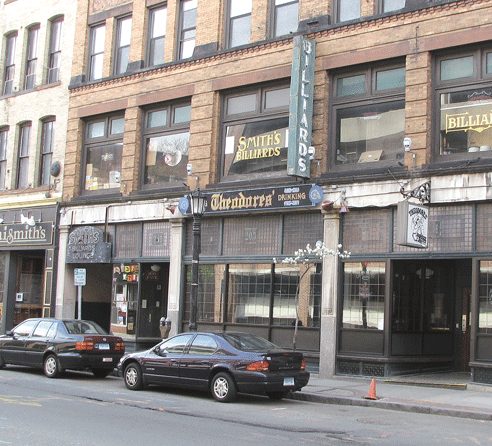 Theodores’ Thrives with Its Blend of Music, Barbecue, and Tradition 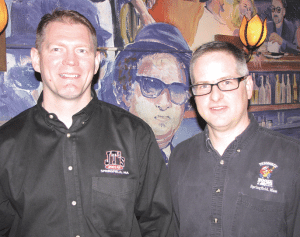 Keith Makarowski, left, and Keith Weppler say Theodores’ has become many things to many different kinds of customers.

The institution on Springfield’s Worthington Street known as Theodores’ is noted for many things — from the blues played on its stage to the barbecue smoked in its kitchen, to the pool hall upstairs where some of that food is enjoyed, said to be the oldest continuously operating billiards establishment in the country.
But lately, it seems the real story is the ghost, or ghosts, that some employees and a few odd patrons say they’ve heard or felt wandering the century-old landmark in the heart of the city’s entertainment district.
There were enough of those stories going around to prompt the producers of the TV show Ghost Hunters to stop by, take a look around, and get some readings back in 2008, roughly a decade after Keith Makarowski and Keith Weppler, who once worked together at Houlihan’s in Connecticut, acquired the place.
“They picked up some noises in the basement and also picked up some heat sensors from what they feel were apparitions,” said Makarowski, referring to the show’s team of experts. “There was some evidence, I guess, of random spiritual bodies.”
While not entirely in the believers’ category when it comes to the purported poltergeists, Makarowski and Weppler can’t dismiss the notion, either. They’ve both heard enough to create doubts.
“We were downstairs counting out the money one time; it was probably 2 or 3 in the morning,” said Weppler as he and his partner talked with BusinessWest at a table in the pool hall. “A few staff members from Theodores’ and the two bartenders from up here came down. We heard someone walking around, and we also heard some stools moved across the floor. We thought the door was unlocked and someone had gotten up there, but when we went to investigate, there was no one, and all the chairs had been set up on the tables for the next day.”
Said Makarowski, “I’ve never seen anything, but I’ve been here when some odd things that just can’t be explained have happened  — like things crashing, and then there’s no mess, and footsteps when there’s no one in the building.”
While the partners will find a few minutes to dwell upon the possible paranormal activity, they acknowledge that it’s somewhat old news. And besides, they’re generally much too busy tending to what is now a multi-faceted business operation.
Indeed, in 2002, the two acquired the pool hall (Smith’s, or Smitty’s, as it’s often called, named after the original owner of the property, Fred Smith), and purchased J.T.’s sports bar on Main Street a year later, giving them a sizable presence in downtown Springfield, where, said Weppler, business owners have to take advantage of every opportunity given to them, and ride out the many challenges.
At Theodores’, the former category involves everything from the business crowd at lunch and after work (which has been steady over the years) to the families that come downtown for Falcons and Armor Games and assorted Disney shows, to the eclectic constituency that gathers in the entertainment district on Thursday ‘bike nights’ in the summer. And then, there are those who want to hear some blues, as offered by the likes of Johnny Winter, Rod Piazza, Luther Allison, and countless others over the years.
Opportunity even came in the form of the freak October snowstorm in 2011, said Makarowski, noting that many cooped-up area residents needed a break from their four walls and found that at Theodores’, as well as working outlets with which to charge their electronic devices.
As for challenges, they include everything from the natural gas explosion last fall, which shut down the club for roughly a day and half during Thanksgiving weekend, one of its busiest of the year, to ongoing, yet unsuccessful to date, efforts to close downtown clubs at 1 p.m.
“It’s all part of doing business,” said Weppler, referring to items in both categories. “We tend to focus on all the great things that downtown can offer and try to key on those positives and build sales from the events that are already happening downtown. You just have to adapt, change, stay focused, and do the best you can to give people a great experience.”
For this, BusinessWest’s annual Restaurant Guide and its focus on landmark institutions, we look at an establishment that certainly isn’t your typical haunt in any way, shape, or form.

The Spirit Moves Them 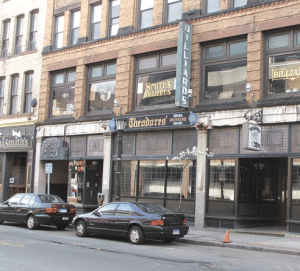 Built in 1902, the building housing Theodores’ has a lot of history — and a number of ghost stories — that only add character to the menu.

As he talked with BusinessWest about the property on Worthington Street, built in 1902, Weppler got up from his seat, went behind the service counter at the pool hall, and reached down for a dust-covered, framed photograph.
“That’s the Smith bowling team,” he said, motioning to a group of a half-dozen men standing and sitting around some bowling pins who practiced their craft on the fourth and fifth floors of the building, where there were alleys for more than a half-century. (Some of those aforementioned ghost stories involve hearing balls rolling down a lane decades after the alleys closed.)
There was no date on the photograph, but further commentary offered some hints.
“This was bowling before electricity,” said Makarowski. “You would bowl, and I would set up the pins and roll the ball back to you, and I’d bowl, and you’d set up up the pins.”
There is quite a bit of history to discuss when it comes to this property — and science (well, sort of), if you count the ghosts — but Makarowski and Weppler are far more interested in talking about the present and future in downtown Springfield, and, more specifically, their future.
They believe they’re well-positioned to take advantage of the positive developments that have taken place downtown and specifically in the entertainment district, and are withholding most comments about whether a casino will change the equation in the central business district if one goes there — and even if one is built in West Springfield or Palmer.
At Theodores’, they’re concentrating on taking full advantage of the establishment’s location, tradition, and ability to serve a host of constituencies.
“Theodores’ wears a lot of different hats for a lot of different people,” said Weppler, taking a phrase generally reserved for individuals and applying it to a restaurant and blues club. “For many business people, it’s a place to come for lunch, or after work, or for celebrations. For families, it’s a place to go before events at the MassMutual Center, and for other people, it’s a place to get great barbeque or listen to music. We’re a lot of things, and that’s what makes us successful.”
It had been this way since the late ’70s when it opened, and Weppler was well aware of all this as he became a consistent customer while working at the former Spaghetti Warehouse, just a few blocks away on Congress Street, in the mid-’90s.
Eventually, Weppler took on some shifts bartending at Theodores’, and as the restaurant’s owner, Teddy Rauh, closed in on retirement, he picked up more managerial assignments. When one attempted sale of the property fell through, the two commenced discussions about Weppler taking it over.
He approached Makarowski about going into business together, and the two acquired the restaurant and the property in 1999.
The blues music served up five nights a week is a huge part of Theodores’ identity and a major contributor to its success — it was named best blues club in the country  by the Memphis-based Blues Foundation in 2004 — but there are many ingredients in this recipe for success, as indicated by the main marketing slogan, ‘booze, blues, & BBQ.’
The menu is broad, with everything from burgers to steaks; jambalaya to chicken and sausage étouffée; sandwiches to salads. But the barbeque dominates the discussion.
And the process for smoking meat — from chicken to brisket, as well as the signature ribs, which come in three varieties — is much more of an art than a science, said Weppler.
“It’s never the same from one day to the next,” he said of the task of smoking a wide array of meats. “From the amount of the wood to the weight of the meat … it’s different every single day.
“Pork and brisket take 12 hours to smoke, and we’re literally putting it in every night and taking it out every day,” he went on. “We only smoke a limited amount of stuff, so when we run out, we run out.”
There is even a warning, of sorts, about these limited quantities right on the menu. “It is likely that on most days we will run out of certain items,” it reads. “Get here early or leave hungry.” Most regulars understand, and heed those instructions.
Meanwhile, the pool hall is now a big part of the mix, said the partners, noting that, while that descriptive phrase still works, the large room is not exactly that anymore.
That’s because there are simply fewer people playing that sport than decades ago, a statistical reality that explains why they have taken several tables out (seven remain, which they say is more than enough) and added such games as darts and foosball, brightened things up a bit, and made the second floor a venue for after-work gatherings, Christmas parties, and other get-togethers.
“When we first purchased it, this was an old-style Color of Money- or The Hustler-like pool hall,” said Makarowski, referring to two billiards-focused Paul Newman movies. “It was dingy, with a lot of classic players. But as those guys got older and pool fell off, we had to change and adapt and give it a fresh look and feel.”
Smith’s now focuses on craft beers — there are a few dozen on tap every day — and providing an atmosphere conducive to that wide array of events. Overall, it has become an important part of the bigger picture, said Weppler.

And on that Note …
As noted earlier, Weppler and Makarowski are not entirely believers when it comes to the many ghost stories concerning their establishment.
But they are firm believers in their landmark’s place not only in Springfield’s history, but in its future, thanks to the many hats it wears and the many constituencies it serves.
“We’ve always focused on just trying to have good food, good service, and good atmosphere,” Weppler said of the operating philosophy at Theodores’. “As long as we take care of the customers, we’ll have customers.” 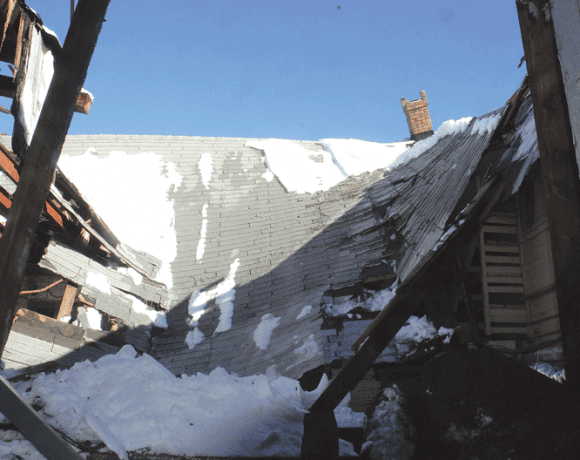