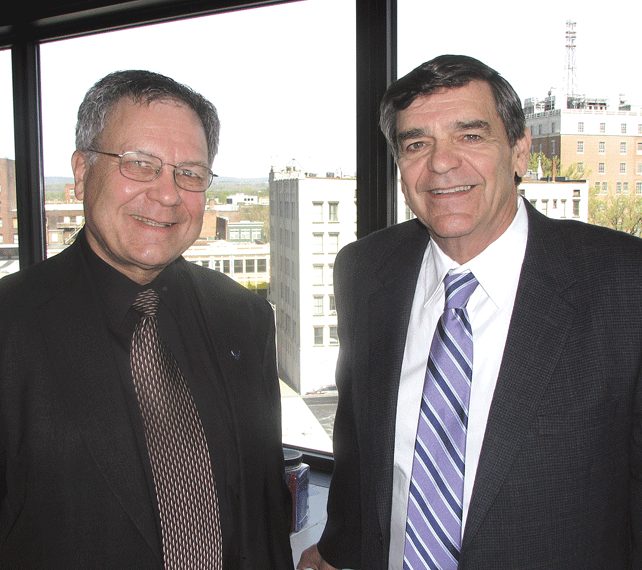 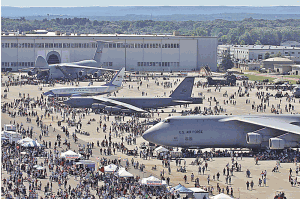 Scene from the Great New England Air Show in 2008.

The Great New England Air Show and Open House, scheduled for Aug. 4 and 5 at Westover Air Reserve Base in Chicopee, has a special theme: they’re calling it “a Salute to the Greatest Generation.”
And in a nod to the men and women who served during World War II and are known by that descriptive phrase coined by Tom Brokaw (it became the title of his book on the subject), the show will feature a number of vintage aircraft from that era — including the vaunted bomber called the B-17 and the fighter known as the P-51 Mustang — as well as several ground displays and re-enactments of events from that global conflict.
Meanwhile, calls have gone out to veterans’ agencies across the region in the hope that they can contact those who served during the war (now in their 90s, on average) and ask those who are able and willing to come to the show and earn a salute from those in attendance.
At the same time, though, a different kind of call is being made, this one to businesses and individuals whose help is needed to make this show — which is expected to draw more than 300,000 people from across New England — all that planners hope it can be and should be. Bud Shuback, president of the Galaxy Community Council, a volunteer civilian organization that supports activities at Westover, including the air show, calls this his “100 Heroes” campaign.
Elaborating, Shuback said he’s working diligently to identify 100 companies or individuals who can donate $1,000 toward the estimated $250,000 the Galaxy Community Council will need to cover its share of the cost of putting on the air show. That’s a bigger burden than in previous years, and there are reasons for that. 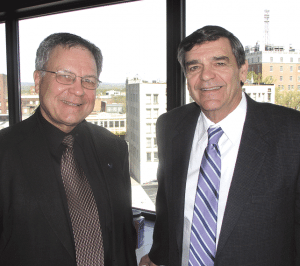 Bud Shuback, left, and Joe Marois say that cutbacks within the military and lingering effects from the recession have created challenges for those raising funds for this year’s air show.

Primarily, it comes down to cutbacks within the Department of Defense, including the number of appearances for flying teams like the Blue Angels and the Thunderbirds, shows that come free of charge for organizers of events like the Great New England Air Show.
Replacing those popular acts with private (non-military) jet-demonstration teams — like the Red Steel Jet Team scheduled for this year’s show that will fly Russian MIG 23s — is necessary, but also quite expensive, said Joe Marois, a long-time member of the Galaxy Community Council.
Marois and Shuback stressed repeatedly that there will be an air show in August — that’s a certainty. What isn’t known yet is the size and overall quality of the show, which will determined by the amount of funding support attainted. But it’s important for the show to reach traditional levels of excellence, they said, to draw a large audience and thus have a significant economic impact on the region.
Meanwhile, the show provides an excellent opportunity for Westover to open its doors to the public, and also assists in the ongoing efforts to recruit young men and women, said Col. Steven Vautrain, commander of the 439th Airlift Wing based at Westover.
“I always stress the ‘and open house’ part of the show’s name — it’s not just about the airplanes,” he said. “It’s an opportunity for us to open up the base, let people come in and see what we do, and show them a good time. It also helps bring money into the local economy, because you have 300,000 people coming, with many of them staying in local hotels and eating in local restaurants.
“It’s also good for us when it comes to recruiting — that’s one of the main reasons for doing the air show,” he continued, noting that he believes he got hooked on flying while attending a show at South Weymouth Naval Air Station when he was young. “That happens with a lot of kids; they come out, see the jets, the helicopters, the Marines, the Air Force — and they make a connection and say, ‘that’s something I’d like to do.’”

Base of Support
Shuback told BusinessWest that this region has a rich history of producing large and memorable air shows over the past several decades.
Indeed, with a few exceptions — forced by everything from scheduled inspections to the ramping up of military activity following the 9/11 terrorist attacks — Westover and Barnes Municipal Airport (home to the 104th Tactical Fighter Wing of the Air National Guard) have staged shows on alternating years since the ’80s.
And while the show will indeed go on this year, additional support is needed to maintain the high quality that visitors have enjoyed over the years — and also to ensure that the show will have the same economic impact it has had in the past, said Shuback.
And those numbers are impressive. The 2008 air show at Westover (the last one in Chicopee) contributed $13.8 million in direct economic impact to the region, according to a report authored by students at the Isenberg School of Management at UMass Amherst.
A large portion of that impact comes in the form of hotel stays and business with other types of hospitality-related ventures conducted by individuals and families traveling long distances to reach the show, the report concluded.
The Galaxy Council has always had to conduct extensive fund-raising efforts to produce the air show, said Shuback, adding that it has secured sponsorships from both local companies and national and international corporations (including several car makers) while also staging a huge kickoff fund-raising breakfast, this year slated for Aug. 3.
But this year, the challenge is greater, he told BusinessWest, because of those aforementioned defense cutbacks and resulting bigger tab for the Galaxy Community Council (which must pay for the fuel for the acts, provide lodging, and other expenses), but also due to the lingering effects of the recession.
“The last time Westover hosted a show was 2008,” Shuback noted, “and while the recession was certainly coming, most companies were not really feeling the impact by that summer.”
More than one-quarter into 2012, many companies small and large are still feeling the effects, he went on, adding that some traditional supporters of the air show are scaling back their contributions, while others are pulling back altogether. “People are being more cautious in this environment.”
These various challenges have forced the Galaxy Community Council to exercise its imagination and resiliency, said Shuback, and one of the answers it has devised is the 100 Heroes campaign.
It is expected to involve area chambers of commerce, the Greater Springfield Convention & Visitors Bureau, Spirit of Springfield, and other groups and elected leaders in an effort to identify parties that can step forward and support the show.
“We’re reaching out to the local people who are impacted by the economics of this show,” said Shuback. “And if you’re in this region, you’re impacted in some way; the money will rattle around, and everyone will benefit.”

Soaring Expectations
The full list of show attractions is still being finalized, but the lineup is already deep and diverse. It includes everything from a host of World War II-vintage aircraft to a demonstration of a Marine Corps CV-22 Osprey; from a jet-powered school bus to a U.S. Navy F-18 Hornet demonstration.
The full scope of the show will ultimately be determined by the support from the business community, including what Shuback, Marois, and others hope will be at least 100 heroes.
“The show has really become a tradition in this region and, beyond that, a boon for the local economy,” said Marois. “It’s a tradition we want to continue because there are a number of important benefits for the region.”

And Then, There Were Five 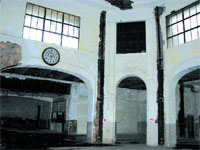