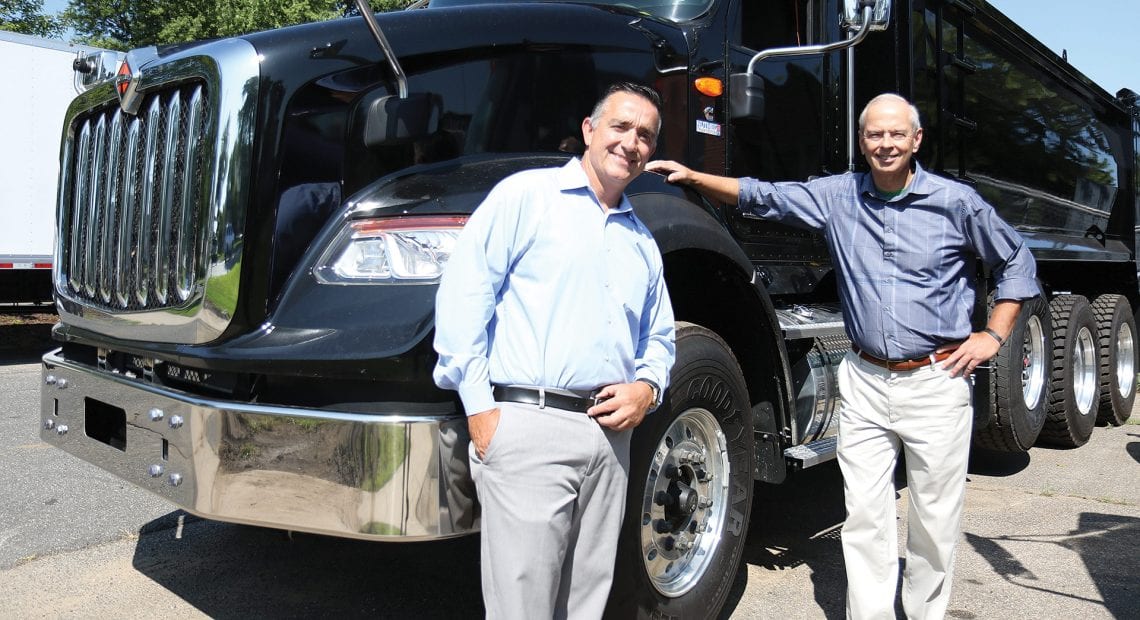 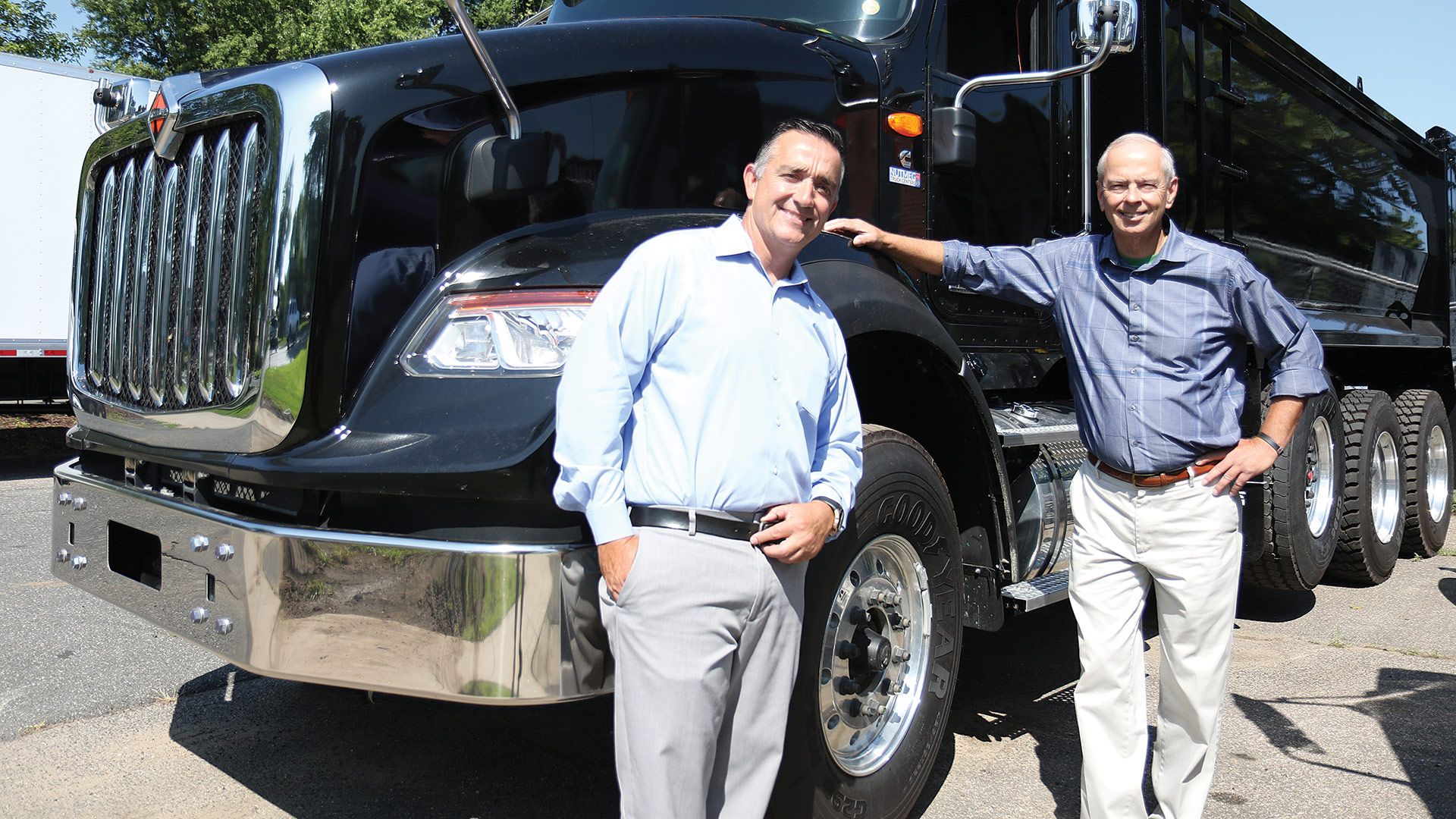 Peter Vecchiarelli, left, and Tom Parsons say that building relationships is the key to success when it comes to commercial truck sales.

Nutmeg Trucks Stands Out by Forging Partnerships with Customers

Peter Vecchiarelli says that selling commercial trucks — everything from box trucks to tanker trucks to huge dump trucks — is a lot like selling … almost anything else.

Indeed, sometimes what a customer thinks he or she needs isn’t really what they need, said Vecchiarelli, general manager of Nutmeg Truck Center in West Springfield, which sells and leases International and Isuzu vehicles and services all makes.

“You don’t want to be a know-it-all, but you want to suggest things that will benefit the customer,” Vecchiarelli said, adding that these suggestions comprise just one of the keys for this business.

Tom Parsons agreed. He sold cars for 30 years before joining Nutmeg, and noted some similarities between that world and this one. In both, and especially this one, success comes from working in partnership with the client to forge an appropriate solution.

“You really have to know the product and what the customer needs,” he explained. “Every single customer has a business, where every person who buys a car probably doesn’t, and each business is different.”

This mindset has enabled Nutmeg — a Connecticut-based business (hence the name) with six locations (the other five are in Connecticut — to stand out in a crowded field of competitors, said Vecchiarelli. He added that success isn’t necessarily dictated by the inventory on the lot (although that certainly helps), but rather by the level of trust that can be established with the client.

“We try to sell ourselves,” Vecchiarelli said. “People buy from who they like and trust, that’s one of our huge mottos. We’ve been around, and people trust us.”

For this issue and its focus on auto sales, BusinessWest talked at length with Vecchiarelli and Parsons about the truck business and what it takes to be leader within it. 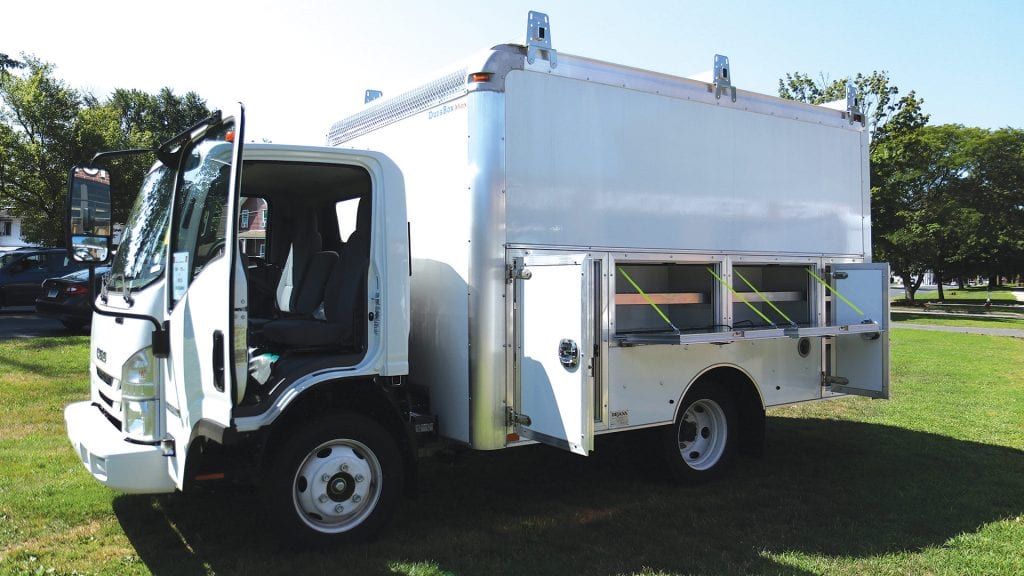 This Isuzu truck, suitable for a wide array of potential clients, is one of many on the lot at Nutmeg Trucks.

And Vecchiarelli started by saying that the truck business certainly wasn’t in his plans when he graduated from Westfield State University in 1992.

Actually, he didn’t have any real plans at all.

Indeed, he earned a degree in Communications, but had no solid ideas about what to do with it. For a while, he worked his summer job and coached football with his brother at Agawam High School. One day, he came across an entry level management job at Penske Truck Rental in Chicopee.

That’s how he got his start in the truck business, and when he found Nutmeg in 1996, he never looked back.

And while looking straight ahead, he told BusinessWest, he wears a good number of hats. Many are part and parcel to having ‘general manager’ on one’s business card, but some might surprise you.

For example, he might very well be the one delivering a new or used truck to a client, an assignment he said he carries out on a regular basis.

This is one of those little things that add up, he said, adding that the big things include having quality products to offer and, again, working closely with the client to find solutions.

This is necessary, because, as noted, there is considerable competition within the truck marketplace.

On the International side, Nutmeg competes against the likes of Ford, Freightliner Trucks, and Mack Trucks. Isuzu competitors include Chevrolet, Hino and Mitsubishi.

Overall, business has been solid over the past several years as the economy has continued its pattern of slow yet steady growth, said Vecchiarelli, adding that company sold more than 40 new and used vehicles in 2018 and is on pace to double that number this year.

It’s customer portfolio, as might be expected, is diverse, and includes everything from general contractors to municipalities to area farms.

In addition to selling trucks, Nutmeg also sells truck parts and provides other services to its customers. Vecchiarelli noted that Clean Machine Power Wash buys all its trucks from Nutmeg, which has a great relationship with the owner. A few weeks ago, the business had its company picnic and asked if Vecchiarelli would do a few oil changes on their trucks while the business was closed for the day. Each oil change on a truck takes from an hour to an hour and a half to complete, and Nutmeg did 11 oil changes throughout the day.

“It’s just the little things we do,” Vecchiarelli said. “It’s not always an 8 to 5 job. You have to do what it takes.”

This brings him back to that work involving relationship-building, how it can create repeat customers and often turn relatively small transactions into much larger ones down the road.

As an example, he recalled the story of how the sale of an $11,000 used box truck eventually turned into much more.

“As I was delivering the used truck, the customer said he was interested in buying a new tri-axle dump truck in the future,” said Vecchiarelli while pointing out one of the obvious benefits of doing that work himself. “We put stuff together and sold him one and he then recommended his friend to us for another tri-axle dump; we turned an $11,000 sale into two dump trucks worth almost $400,000.”

There have been many stories like that recorded over the years, said both Vecchiarelli and Parsons, adding that by focusing on the fundamentals of customer service, Nutmeg continues to thrive and grow.

“Those fundamental things are so true,” he said. “We practice fundamentals, try to over deliver and exceed expectations.”

Vecchiarelli agreed. “The biggest thing that sets us apart from the competition is experience, getting the job done, and building relationships,” he said in summation. “If you do little things right, people remember that.” u 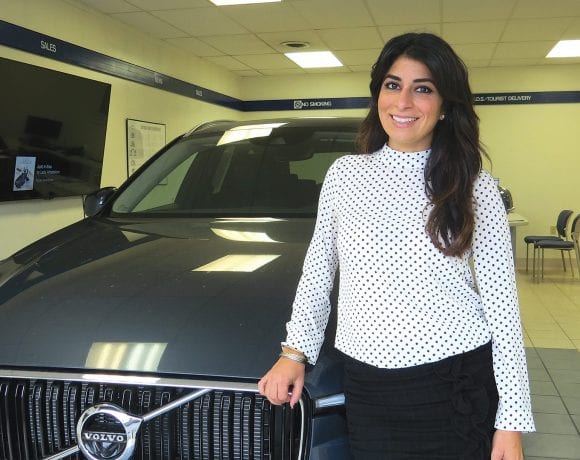