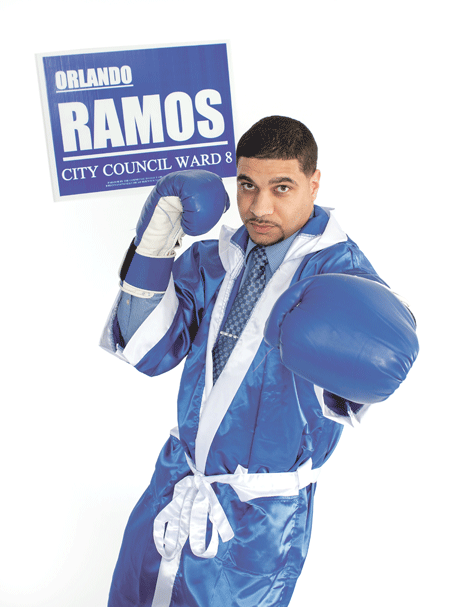 Orlando Ramos has always been a fighter.

He trained under local boxing legend Duke Belton and took plenty of punches. “But I think I’ve been hit harder in politics than in the ring,” he said. “I fought in the ring, and now I fight outside the ring for the people — for what I represent.”

After graduating from Putnam Vocational Technical High School, Ramos began his professional career as a carpenter, and was appointed union steward of the United Brotherhood of Carpenters Local 108 in 2007, followed by election to the executive board in 2008. But he eventually left the trade to focus on public service.

“It all started for me when I was involved in drafting a piece of legislation relative to construction unions, and I made friends in the process,” he said. “After I hurt my back, I got offered an internship in the Western Mass. governor’s office, and it took off from there for me.”

Broadening his passion for service, Ramos has been a member of the Indian Orchard Citizens Council, the Ward 8 Democratic Committee, and the Labor Council for Latin-American Advancement, as well as a stint as Springfield license commissioner.

“That was a great learning experience,” he said. “I was able to accomplish a lot in terms of making positive changes on the commission. Combined with the whole experience working in the governor’s office, I felt like that was the path I wanted to take — helping other people.”

He was then offered a full-time position as district director in the office of state Sen. James Welch, handling a number of constituent services, and was elected to the Springfield City Council last November.

“I’m a single dad, and my daughter just turned 9, so one of my priorities is education, and access to education equality,” he said. “My biggest motivation in doing what I do is providing a better future for my child and the other children in the city.”

That said, when Ramos considers Springfield, he sees a city on the rise, despite its challenges. “I love the way our future looks right now, with so many businesses willing to invest in our city. People are excited about what the future holds for Springfield.”

In other words, it’s a city worth fighting for.