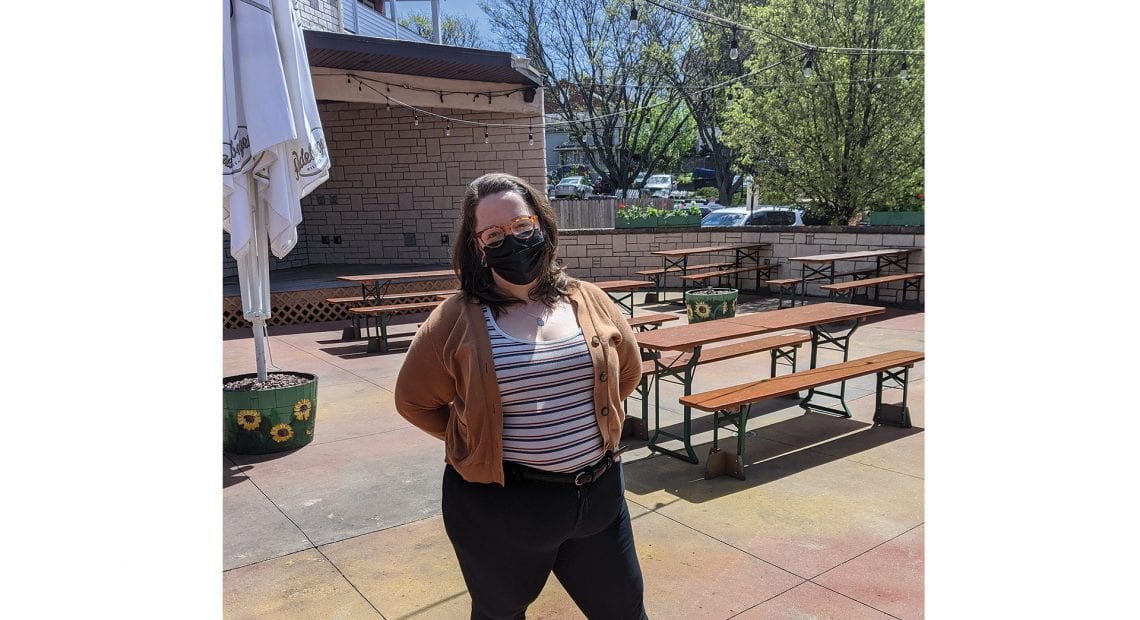 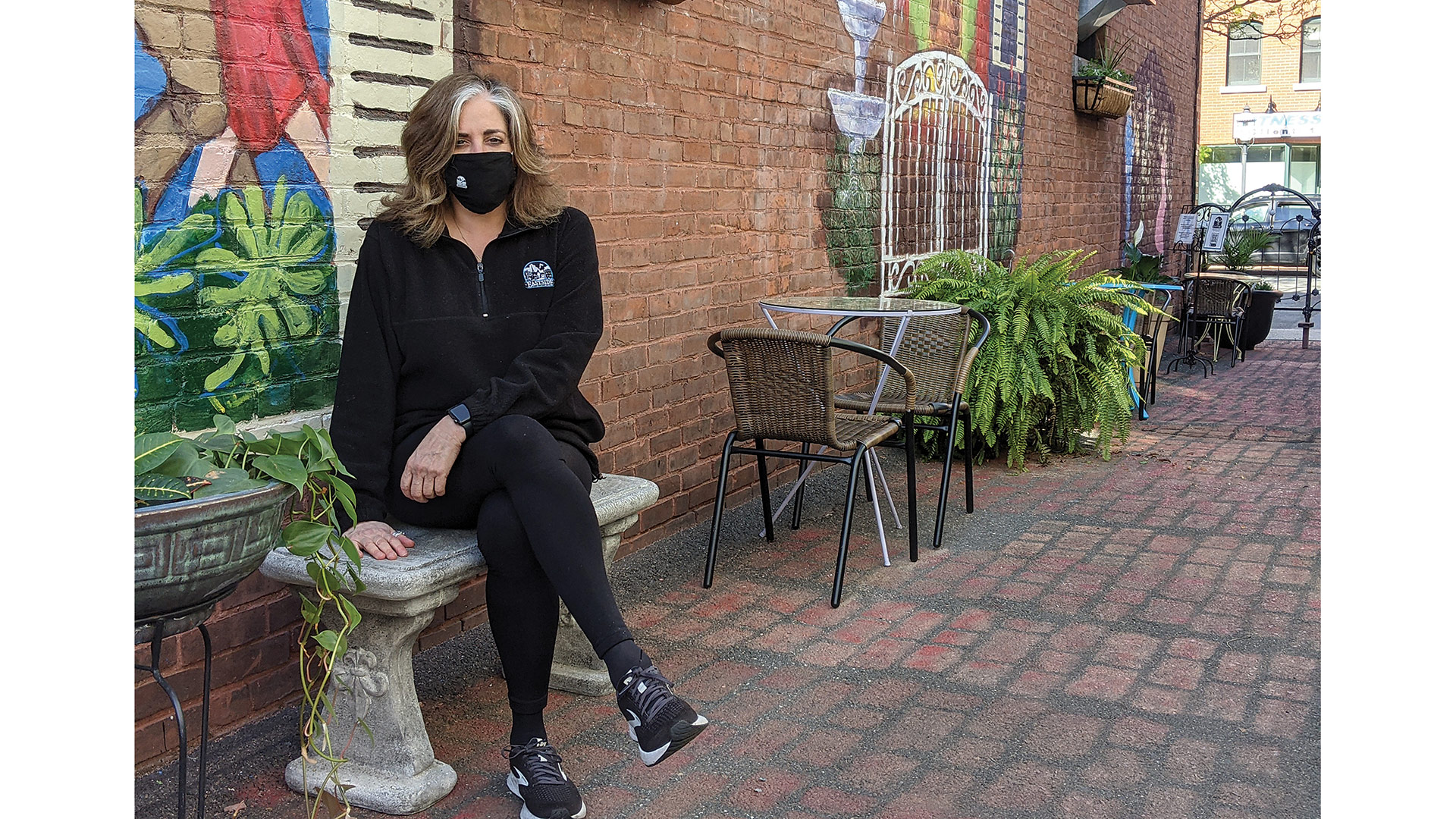 Debra Flynn in the alley behind Eastside Grill, which has been transformed into a charming, colorful dining spot.

Fast-forward to, well, just last week, and the story is a different one.

“We just celebrated our seven-year anniversary,” said Collins, owner of Center Square Grill in East Longmeadow, who marked the milestone by donating 10% of the day’s total sales to Shriners Hospitals for Children in Springfield. “That’s something we would not have been able to do without outdoor seating.”

Reliance on al fresco dining — and gratitude for the return of warm spring weather — is a common theme for restaurants across Massachusetts, at least those that had outdoor dining space available, or the opportunity to create some.

In Collins’ case, he didn’t even wait for spring to return.

“We’ve had outdoor seating since we opened, but we definitely expanded on that,” he said. “In fact, we spent nearly $20,000 ramping up for the fall, installing greenhouses with electric heat. All winter long, we offered single-use lap blankets for people who came in.”

In doing so, he was able to serve diners at something approaching normal capacity through the cold months, even though interior capacity was still limited by public-health mandates. “It was a game changer. Really, for us, it put us in a position where we were not just able to squeak by, but to comfortably pay our bills all year, which was a great thing.”

Customers appreciate — and usually prefer — the outdoor option, too.

“When the phone rings, 90% of the time, it’s with inquiries to sit outside,” he said. “We took down the greenhouses for the summer but plan to bring them back. People are still talking about the greenhouses. They were a hit for us, and they’ll definitely be back in the fall.”

Munich Haus in Chicopee has long served patrons on a large patio known as the Biergarten, with seating for 150 — well, before physical-distancing rules, anyway — and a 24-seat bar area.

“It was a game changer. Really, for us, it put us in a position where we were not just able to squeak by, but to comfortably pay our bills all year, which was a great thing.”

“It’s been great,” owner Patrick Gottschlicht said. “A lot of our customers already knew about it. We didn’t have to put a tent in the parking lot with concrete barriers or anything; we’ve got a fully set-up Biergarten, a true outdoor area. We’ve always said we’ve tried to emulate the experience of sitting in a biergarten in Germany, to make it as authentic as possible.”

At Eastside Grill in Northampton, owner Debra Flynn has taken several approaches to allowing customers to eat outdoors. She converted an alley behind the restaurant into a cozy, colorful space lined with potted plants, colorful murals, and lightbulbs strung above the tables for the evening hours.

This year, while adding even more plants and patio umbrellas to the alley, Eastside Grill is one of a handful of restaurants and retailers set to benefit from Summer on Strong, a city initiative to close a small portion of Strong Avenue to vehicle traffic from Memorial Day through Labor Day. Eastside will be able to seat 32 more customers in the road, almost doubling its outdoor capacity to 70. Live music outdoors will be a feature on many nights as well.

Like others we spoke with — and have been speaking with since restaurants were allowed to partially reopen last spring — Flynn said many folks want to dine out, but still worry about gathering indoors, so outdoor dining is critical for business.

“We get calls every single day about it,” she said, noting that she doesn’t take reservations specifically for outdoor seating, but customers can request it and wait for a spot. “I don’t blame them. We want them to be very comfortable, and if you’re not comfortable inside, we want to make sure we have a table outside.”

Taking to the Streets

The barriers between restaurants and roadways that were a mainstay in downtown Northampton last summer have been going up again in preparation for the outdoor dining season. Despite the loss of parking that results from this concession to restaurants, city leaders heard enough positive feedback last year to allow eateries to push out past the curb again along Main Street, Pleasant Street, Pearl Street, Masonic Street, and other spots — and, in cases like Strong Avenue, well beyond the curb.

“The city has been really wonderful to work with,” Flynn said. “Everyone from the City Hall to the DNA [Downtown Northampton Assoc.] to the chamber has been really helpful. I feel really good about the way things are going right now.”

Meanwhile, a recent order by Easthampton Mayor Nicole LaChapelle will allow restaurants and retailers on Main, Cottage, and Union streets to expand their seating options and retail spaces into parking spots and other public spaces. Businesses interested in the exemption must first submit detailed plans, including a review for ADA compliance, an exterior lighting plan, and a timeline for how long the outdoor seating will stay in place.

Easthampton allowed a similar outdoor-dining expansion last year from August to November in an effort to support local businesses struggling to navigate the economic impact of the pandemic. But with the accommodation being announced late in the summer season, only one restaurant, the Silver Spoon on Main Street, ended up using parking spaces for seating. The mayor expects interest from many more businesses this year. 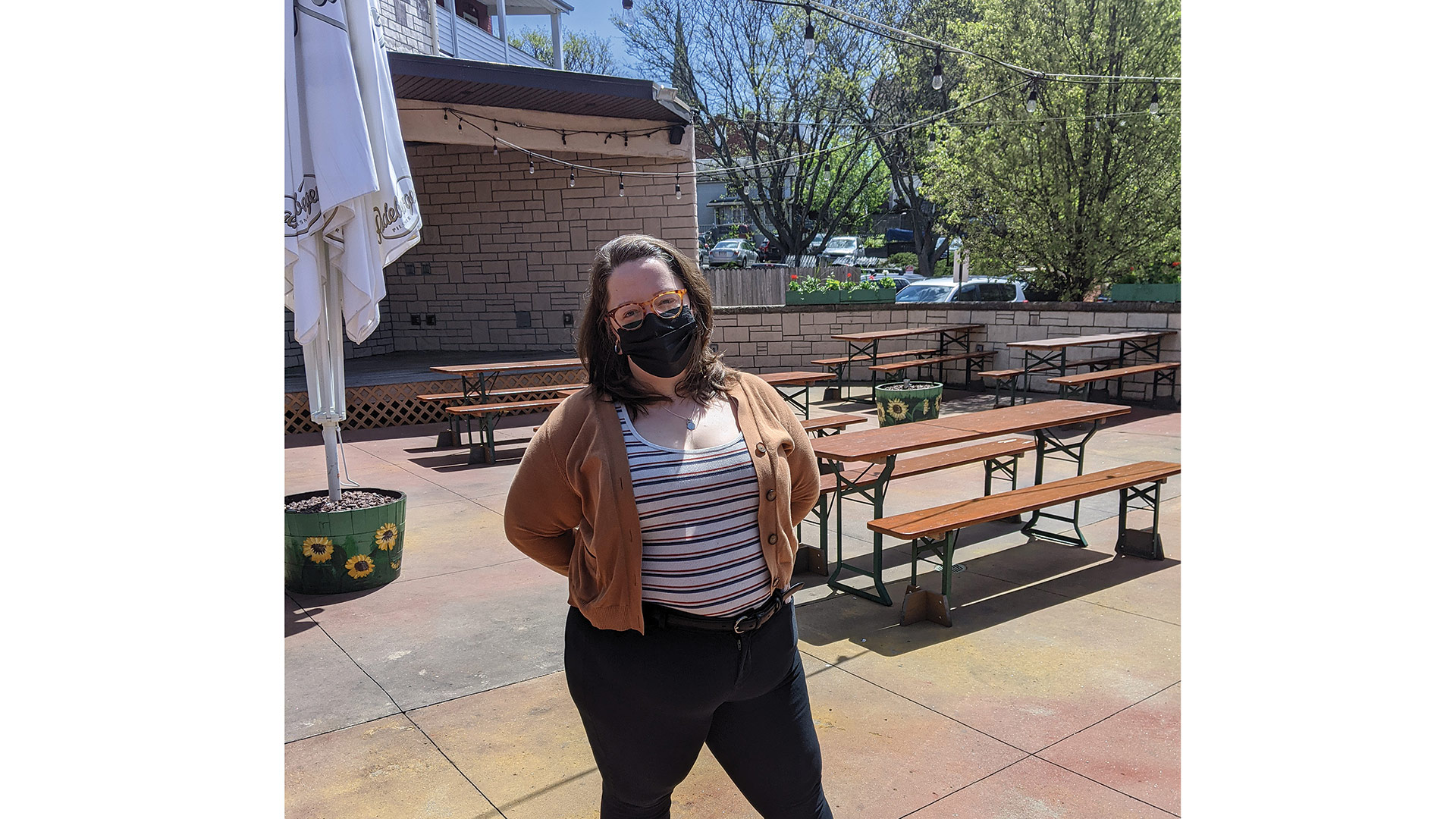 Keisha Fortin says the outdoor Biergarten has been a critical part of business at Munich Haus during the pandemic, and will continue to be well beyond it.

One reason is the still-prevalent sentiment, even after the majority of Massachusetts adults have been vaccinated against COVID, that dining outdoors just feels like a safer option.

“Anyone who’s concerned about coming in, we have the outdoor seating, and they can feel safe outdoors,” Gottschlicht said. “Or indoors, too — but, yeah, there’s plenty of fresh air and open space out there.”

Kiesha Fortin, longtime manager at the Munich Haus, said she looks forward to the day when distancing rules end and she can put more tables on the biergarten patio, due to how popular that option is. Most people are clamoring to eat out, she noted, but many prefer to do it outdoors.

The pent-up desire to eat out has posed another challenge to restaurants, Collins said — staffing up to meet rising demand.

“We’re seeing more and more people coming back to eat, but the biggest challenge for our business, and everyone I’ve talked to in my line of work, is the way unemployment benefits are being handled. We’re having problems getting entry-level employees in the door because everyone is making more staying at home. Typically we run around 95 employees, but we’ve been struggling to stay above 75.”

That said, “hopefully people starting to come back out will have a little patience and realize what things were like a year and a half ago is not the current scenario,” Collins added. “It’s not that we don’t want to hire people back; we just have no people coming through the door to work.”

They are coming to eat, though, especially to restaurants serving up meals outdoors — a development that, for this beleaguered industry, has certainly been a breath of fresh air. u 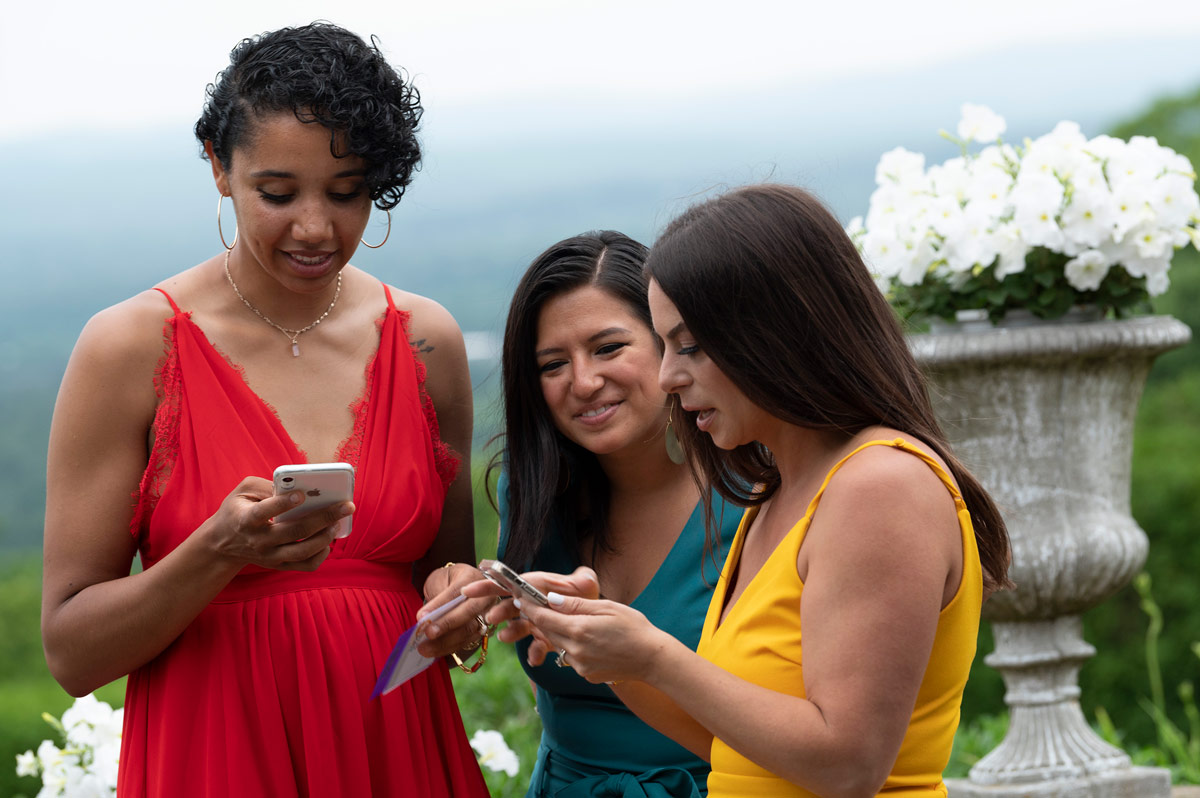