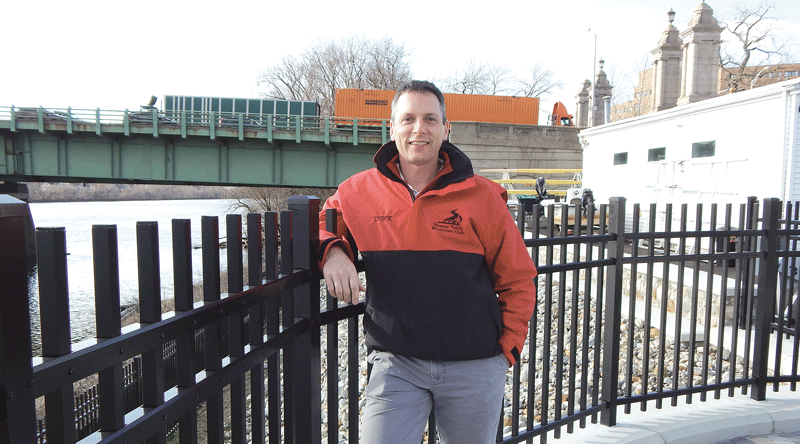 Benjamin Quick hopes to strengthen and grow programs at Pioneer Valley Riverfront Club so more people can experience the beauty of the Connecticut River.

Sunlight dances off sparkling water as Emily Quirk sits on a platform overlooking the Connecticut River. Her white socks are wet and muddy, but the 17-year-old pays no heed to the chilly breeze blowing along the riverfront; her focus is upstream as she watches for the two boats she helped launch — thus, the muddy feet — return from their first outing this season.

Quirk has been rowing since eighth grade, and is a member of the Pioneer Valley Riverfront Club’s (PVRC) competitive team. “The sport is unique. Not many people are involved with it, but just being on the river is so peaceful,” she said.

It’s that same feeling and sense of wonder that newly appointed PVRC Executive Director Benjamin Quick hopes to promote in his mission to expand the club’s visibility, programming, and sponsorship. He also wants to upgrade some of the equipment and improve the boathouse, and although he has only been on the job a few weeks, new programs have already been put into place, and marketing efforts have begun to meet those goals.

“Most people don’t know anything about rowing. They think the only way to get on the water is to rent a kayak. But our rowing program provides recreational and competitive opportunities,” Quick said, adding that it only takes one day to learn to paddle a dragon boat.

His efforts to raise awareness about PVRC will get a decided boost in early December, when PVRC hosts the 2016 U.S. Rowing Annual Convention.

“This will be the most momentous rowing event in Springfield in a century; it will be the culmination of our work this year and put Springfield on the map,” Quick said, explaining that the convention is the premier event for organized rowing and teaching.

The multi-day affair will highlight the history of rowing, look to its future, and include a number of seminars and programs.

“We’re the gateway to the Connecticut River in Springfield, and this will be dream exposure,” Quick continued. “The rowing community is international but very networked, and since PVRC is the host club, it lends a degree of legitimacy to what we have felt here internally.”

More than 600 rowers, coaches, and interested people are expected to attend, along with several dozen vendors, and although the events will be held in Springfield hotels, PVRC will offer boathouse tours and is planning a Saturday-evening gala to make the convention memorable.

The last convention was held in Philadelphia, which boasts 12 private, exclusive boathouses that date back to the 19th century. “It’s a tough act to follow, but we are the people’s solution to getting on the water in Springfield,” Quick said, explaining that the City of Homes was selected as the 2016 venue due to efforts by the Greater Springfield Convention & Visitors Bureau.

GSCVB President Mary Kay Wydra said outreach began when there was talk of hosting the Olympics in Boston in 2024. During that time period, the tourism board worked hard to make connections that would promote sports-related activities in Western Mass., which led to winning the bid to have the U.S. Rowing Convention held here.

“We want to bring sporting events to the region that have an economic impact on our local economy,” said GSCVB Director of Sales Alicia Szenza. “We’re really proud that Springfield was selected.”

Springfield has a storied rowing history, and in 2012 PVRC took up residence in a century-old building that formerly housed Bassett Boat’s showroom. It sits on the edge of North Riverfront Park, which recently received a $1.3 million makeover, and is backed by the 3.7-mile Connecticut River Walk and Bikeway.

Quick said the club is delighted with the new pergola, pavilion, picnic tables, nautical flagpole, and sitting walls at the park, and works closely with the city to maintain it.

The views and the new amenities were designed to attract more people, and the improvements are important to the public face of PVRC, which is dependent on sponsorships, grants, and donations to fund its annual $500,000 budget.

The clubs sponsor a large number of youth programs, and Quick said the business community has been very supportive, with many companies stepping forward to help, such as Peter Pan Bus Lines, which houses some of its boats during the winter. 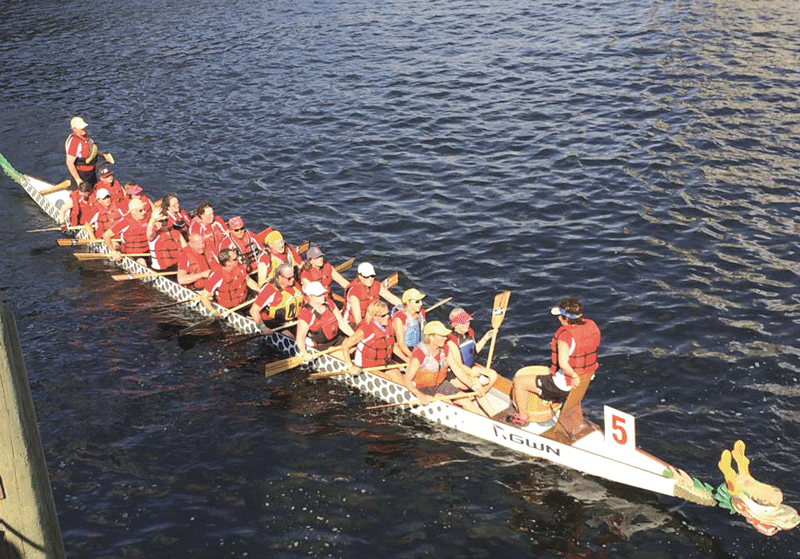 The Dragon Boat Festival on June 25 offers businesses a unique team building opportunity on the Connecticut River that includes entertainment, food, and a chance to compete for prizes.

The clubhouse has undergone recent renovations; new men’s and women’s locker rooms with showers have been added, and a new community room is slowly taking shape, where parents can relax and young people can do their homework if they arrive before the afternoon programming begins. The floor was just finished, thanks to help from United Water (Suez) in Agawam, which supplied the labor to paint it after a broken pipe destroyed the carpeting last winter. In addition, donations of high-quality, second-hand furniture are being accepted.

“Everyone who is exposed to what we do wants to help,” Quick said. But, unfortunately, many companies that support the club have told him they will have to reduce their contributions this year.

“But I see it as an opportunity, not a challenge,” he continued, adding that the organization has taken a close look at where to make improvements and what can be cut. For example, the club just hired three, part-time seasonal coaches, which is a reduction from the past, when they were overstaffed and didn’t have enough formal programs. “But that leak in the dam has been plugged,” he noted.

To illustrate that point, he told BusinessWest about a few new, formal initiatives that will kick off this summer. They include a five-day learn-to-row program that will take place the first week of each month; a dragon-boat paddling program, and an opportunity for experienced rowers to engage in high-performance training.

Corporate outings are also on the menu, and will range from kayaking to canoeing, with refreshments. “These programs will allow adults to get some exercise, see the city from a new perspective, and have a story to tell, which is part of the century-old rowing legacy,” Quick said, noting that business events will be custom-tailored to suit individual needs.

As mentioned before, youth programs comprise a critical part of the club’s mission, and about 100 young people are exposed to start rowing through the club — and hopefully develop a passion for it — each year. They come from a wide range of area communities, and many receive scholarships.

“Rowing is not a high-school sport, and our program gives kids from Springfield public schools an opportunity to see the city from the river,” said Quick. “If it opens one door even a few inches wider, we consider it a success.

“We’re trying to get kids to feel good about doing something well and set the bar high for them,” he went on, adding that this constitutes a commitment the PVRC has made to the city and its sponsors.

Rowing has another benefit for young athletes; almost 50% of females who apply for rowing scholarships receive them, and last year one of PVRC’s competitive rowers earned a full scholarship to George Washington University.

Adults who join the club become part of the Master’s Program and can choose to row competitively or simply enjoy lazing along the river on warm summer nights. However, most contribute financially or through donations of time, and many become mentors to teens in the youth programs.

“They work shoulder to shoulder with them during volunteer activities, which is an experience these teens couldn’t get anywhere else,” Quick said.

One of the club’s largest events is its Dragon Boat Festival, which will be held June 25, and will attract more than 500 paddlers from all over the Northeast. “The boats are magnificently decorated and have drummers who sit in the bow and set the beat for the paddlers,” he noted.

Teams are still needed, and groups and organizations are invited to sign up. The cost is $2,000, which includes a half-day of training, all that is needed — life jackets, the boat, coaching — and more.

“The festival is the perfect event for businesses and organizations looking for a new team-building opportunity,” Quick said, adding that no experience is needed. The day will also include a breast-cancer-survivor flower ceremony, Asian-themed entertainment, music, food, and vendors.

But not everyone wants to compete, so people can sign up to learn how to paddle and join others several nights a week on the club’s dragon boats. “We need more paddlers,” Quick said, noting the activity is well-suited to a variety of abilities, and women make up the majority of people who choose to navigate the river in this manner.

Tom Siddall was recently appointedthe new varsity and master’s rowing coach, and his goal is to change the way training is conducted by focusing on strength and conditioning, mobility, flexibility, volume, and intensity.

“I’ve been able to scale the program so participants can do as much as they want,” he said, explaining that, since rowers spend so much time indoors practicing during the offseason, it’s important for them to gain functional strength, which includes doing exercise such as squats, dead lifts, or one-leg unilateral movements.

On a recent day, Julia and Luis Cortes were rowing on machines overlooking the riverfront. “I like the discipline and commitment this requires,” said 16-year-old Luis, explaining that each person strives to break through their own personal barriers.

Julia was excited about getting out on the river, and said her enthusiasm has grown since they signed up five months ago.

Quick doesn’t find that surprising. “Sometimes you just have to stop and gawk at the wildlife,” he said. “We see bald eagles fishing on the river, and it’s an inspiring sight.”

And it is in line with the soaring goals of this club, which introduces people to a form of exercise that nourishes the mind, body, and spirit.