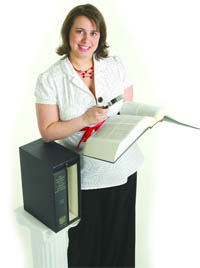 Sarah Tsitso has always surrounded herself with words.

She says she can’t imagine a career that doesn’t involve writing, and has a strong respect for and commitment to community journalism. Beyond that, she’s an avid reader who founded a book group for women last year, to serve as an outlet for those looking to delve deeper into literature, or others who needed an audience to share their insights into favorite books (she’s a fan of the Brontë sisters: Emily, Anne, and Charlotte).

An unexpected gesture from her grandfather best puts Tsitso’s love for language into perspective, however. He presented her with a vintage Oxford English Dictionary, a gift that brought her to tears.

“Who cries over a dictionary?” she joked. “I guess it’s because language has always been treated with so much importance in my family. Words are in my blood.”

But building vocabulary isn’t Tsitso’s only interest. She champions a number of causes, including women’s rights (she’s a member of NOW), environmental preservation, and responsible government. And although she completed her coursework toward a bachelor’s degree at Simmons College in four years, she had five majors in that time: Philosophy, Environmental Science, Political Science, Secondary Education, and, finally, American Literature.

“Journalism was my third job out of college, and I fell in love with it,” she said. “There is time to learn, and to tell a story.” She began as a reporter at Turley Publications in Palmer, which owns 15 community newspapers across the region. Soon, Tsitso was promoted to editor, and has worked with three different papers since then, either growing long-held publications or launching a new one.

She’s twice been recognized by the New England Press Assoc. for her work, and continues to study the craft through professional development, having recently attended the American Press Institute’s prestigious management-training program. Tsitso also enjoys teaching, both formally and informally. She leads journalism courses for adults and children, and regularly celebrates words in all their forms with her two-year-old daughter, Vivian.

“Vivian is a huge reader,” she said, noting that while Vivie isn’t ready for Brontë, they’ve started with a different Charlotte — one who lives on a farm with her best friend, a pig named Wilbur.

“We’re doing the chapters together at night,” said Tsitso. “But no matter what time of day it is, there’s always a book in her hand.”