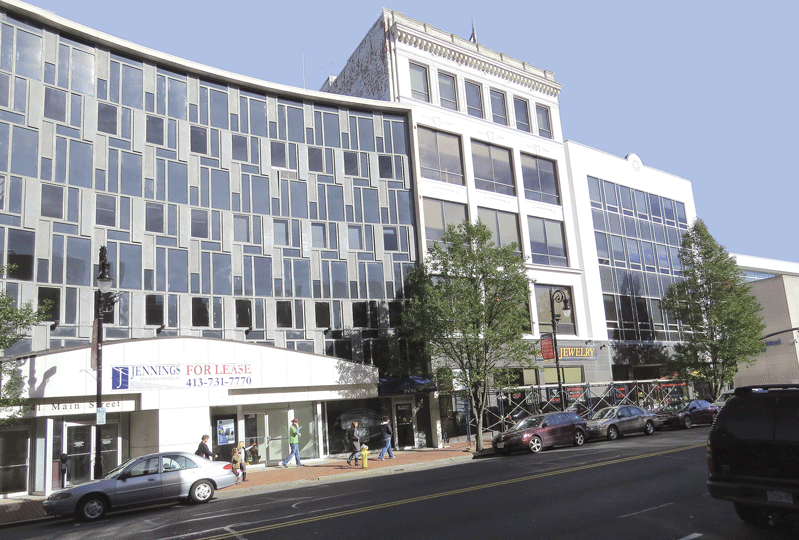 The buildings along Main Street between Harrison Avenue and Falcons Way are among those expected to draw interest from businesses to be displaced by the casino.

That’s how he chose to describe the relative — and unexpected — quiet on the morning of Nov. 5, maybe a dozen or so hours after it became clear that ballot Question 3 was going to be defeated and that the casino era had officially begun in Springfield.

“But then on Thursday, the floodgates opened,” said Jennings, president of Springfield-based Jennings Real Estate, in reference to the volume of phone calls to his office, most of them from business owners who will be displaced by the $800 million gaming complex to be built by MGM Resorts International in the city’s South End.

And he expects the calls to keep coming in the weeks and months to come as the dust only begins to start settling from this momentous development, one that has the potential to lift the local real-estate market from the general doldrums that have characterized it for the more than a decade now.

“My expectation is that we will be busy, and the whole trickle-down from this will be fantastic,” he told BusinessWest. “It will involve not only the real-estate brokers, but the lawyers, the phone companies, the contractors, the rug companies, the movers, and many others.

“The trickle-down will be significant and exciting,” he went on. “For the first time in I don’t how long, the landlords in Springfield who have slugged it out for the past 15 years will finally see some rent appreciation.”

While he was somewhat more reserved in his tone, Doug Macmillan, president of Macmillan & Son Inc., said essentially the same thing as he speculated on what will certainly be an intriguing time for the downtown real-estate market.

“I don’t think we’ve ever seen anything quite like this — it’s a dynamic change,” said Macmillan, who came into the business started by his father just as the real-estate bust of the late ’80s was gaining steam and has seen a number of economic cycles since. “This is certainly going to be interesting.” 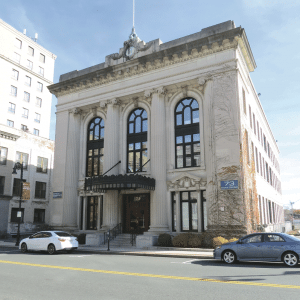 The stately building at 73 State St., part of which will be used for the casino’s hotel, is among those whose tenants must find new homes.

And the relocation of businesses to be displaced by the casino is only one of the reasons why.

Indeed, while many tenants in buildings along State, Main, and other streets in or near the South End will have to be moved to make way for the casino and MGM’s operations, there are others who will want to be near that $800 million complex — or away from it, as the case may be. Meanwhile, Macmillan has started getting calls from some parties concerned about the casino and I-91 reconstruction projects happening simultaneously, and the possible negative impact on their business.

And while the downtown market has tightened up somewhat in recent years, with new businesses and organizations ranging from MassLive to Bay Path University moving in, there is still plenty of space available in many different categories.

One full floor and many smaller spaces are available in 1350 Main St., also known as One Financial Plaza, said Bill Low, a broker with NAI Plotkin, which is leasing agent for the top 12 floors in that building. There is also some space in both Tower Square and Monarch Place, Macmillan noted. Meanwhile, considerable square footage is available in Harrison Place and other buildings along Main Street between Harrison Avenue and Falcons Way, noted Jennings, who is handling those properties for owner Glenn Edwards.

Jennings said he’s already had a few soon-to-be-displaced business owners sign on the dotted line, and he expects several more in the months to come as the project moves forward.

“Our goal is to be 100% occupied,” he said of the properties along Main Street. “That’s ambitious, but we’re optimistic.” 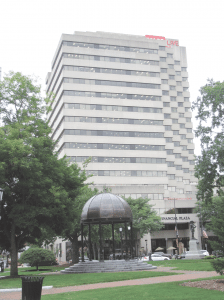 One Financial Plaza, a.k.a. 1350 Main St., is another property expected to draw interest from displaced businesses, including many law firms.

For this issue and its focus on commercial real estate, BusinessWest takes an in-depth look at this exciting time for the local market and at how this unique opportunity might play itself out.

MacMillan told BusinessWest that he didn’t care to speculate on how many businesses will be displaced by the casino and MGM’s day-to-day operations and how much square footage is represented by those pending relocations. “I really have no idea, and if I guessed, I’m sure I’d be way off.”

Jennings said he’s heard some numbers, such as 250,000 square feet, in reference to the amount of real estate involved — meaning property to be demolished or made part of the casino complex.

Whatever the figure is, it adds up to an unprecedented opportunity for area landlords and brokers to fill space that in some cases has been vacant for more than a decade.

And, in many ways, movement to seize that opportunity began months ago.

Indeed, Edwards has invested a significant amount of money in capital improvements to the properties along Main Street in anticipation of the casino moving forward, said Jennings, adding that his firm has been proactive with regard to marketing the space, opting not to wait until after the vote on Question 3.

“We put together a strategic list of properties that we have both for sale and lease in Springfield,” he explained, “and knocked on doors.”

And there are many to knock on within the 14.5-acre area in which the casino will be built, he said, noting that there are many lawyers and other professionals in both 95 State St. and 73 Main St. — located just a block or two from the Hampden County Hall of Justice — which will both become part of the casino complex.

Meanwhile, there are several retail operations along Main Street and other service businesses within the casino site that will have to be relocated.

Some will move out of that area and perhaps out of the city, but Jennings and Macmillan believe many will opt to stay downtown.

And some of these business owners are being proactive themselves when it comes to finding a new address, opting not to wait until the votes were counted on Nov. 4 to consider some options.

“The day after the election, my phone did ring a little louder and a little longer than it normally does,” said Macmillan. “But a lot of these people have been forward-thinking enough to understand that they need to be proactive about this, because they’re only going to have X amount of time to find a new home.

“We’ve been working with some groups for more than a year now,” he continued, “because they’ve recognized this eventuality and wanted early on to identify where they thought they might like to be.”

However, some waited until after the vote, said Low, and now they’re making up for lost time.

“There were some people who didn’t bother calling — they just showed up at 1350 Main St. and asked to see space,” he told BusinessWest, adding that a few businesses have made verbal commitments to take space there. “You hardly ever see anything like that.”

He noted that the building is attractive to the law firms and solo practitioners that will be displaced by the casino because of its proximity to the courthouse and the flexible nature of the available space.

Jennings said he’s brokered some deals for smaller spaces, 2,000 square feet and under, and also a few in the 2,000-to-4,000-square-foot range. And since Question 3 was defeated, the volume of inquiries has increased exponentially.

They come during a time that Macmillan described as a “resurgence of interest in downtown,” a period during which UMass Amherst has opened a center in Tower Square; Bay Path, MassLive, and Thing5 have moved into 1350 Main St.; New England Public Radio has relocated into the Fuller Block; and Accountable Care Associates has taken a full floor in Monarch Place; just to name a few developments.

“There’s been a renewed interest in downtown that is unrelated to the casino,” he explained. “We’ve been extremely busy leasing an awful lot of downtown office space for the past two years. Some of them are new tenants, some of them expanding; there’s been a lot of activity, and we’ve done a number of deals.”

The “shuffling of the deck,” as he called it, that will result from the casino projectg — and is, in many respects, already underway, will further tighten and stabilize the market, and likely push lease rates higher.

“With all this interest we’ve seen in downtown before the casino, the downtown market has tightened up; there’s still a fair amount of space, but there’s not the same amount that there was two years ago,” Macmillan said, speculating that perhaps 80% of the Class A space and 70% of the Class B space downtown was occupied.

Jennings said the surge of interest is already impacting rates in some of the properties he’s representing. At Harrison Place, he noted, space that was quoted at $11 or $12 per square foot is now being quoted at $17, and there have been similar increases at other properties along Main Street.

Low said the asking prices at 1350 Main St. may soon be rising, adding that those who wait to begin the process of finding a new home will likely pay more for that square footage.

As he talked about the recent history of the downtown commercial real-estate market, Macmillan said there have been a number of “fits and starts” over the past few decades, small gains that have been slowed or reversed by economic declines in the early ’90s, just after 9/11, and the Great Recession.

The dawn of the casino era presents the opportunity for something far more substantial and lasting, he said, although the overall impact of this massive development is still difficult to predict.

What is known is that this situation presents a rare opportunity, one that all those involved are committed to take full advantage of.