Springfield Project Offers a Window to Changing Role of Libraries

An architect’s rendering of the new branch library to be built in East Forest Park.

As she talked about libraries, and borrowed (that’s an industry term) from Mark Twain when she said their death was greatly exaggerated, Molly Fogarty used some words and phrases that definitely brought her argument home.

That’s because these are not the kinds of things that would have been said about these institutions a century ago, or perhaps even a decade ago.

Elaborating, he said that, in this computer age, access to the Internet isn’t anything approaching a luxury. It’s a necessity, for those who want to learn, apply for a job, or fact-check a work project.

And providing that access is just one of the ways libraries have changed over the years, from when they were mostly, but not entirely, book repositories.

“Books are still a big part of what we do, but there’s so much more,” she said. “Libraries are the one place where you can get help, get questions answered, use a computer, borrow materials, attend a program … and it’s all free. We have 700,000 visitors a year, and if we weren’t here, where else would they go?” 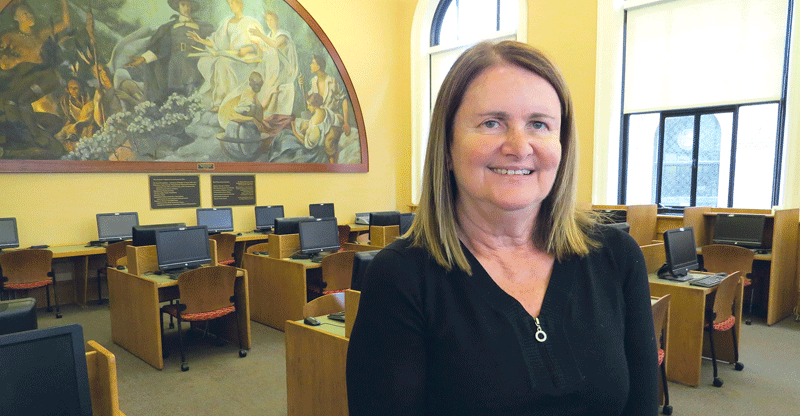 Molly Fogarty stands in Wellman Hall at the main branch of the Springfield City Library. It’s empty at this moment (the library was closed at the time), but within five minutes of opening each day, she said, each computer is occupied.

Which brings us to the planned new East Forest Park branch of the Springfield Library. This is a facility that has been talked about for decades, and it’s been on the proverbial drawing board for a few years now. Funding has been secured from the city and state that will cover a good deal of the $9.5 million price tag, and a capital campaign, titled Promise Realized, has been launched to raise the remaining $2 million.

Matt Blumenfeld, a principal with Amherst-based Financial Development Agency (FDA), which has coordinated fund-raising campaigns for new libraries and additions across the state and beyond, said the Springfield project provides an intriguing tutorial, if you will, on the changing and expanding role of libraries and their continued importance to individual communities.

Library-building projects contribute jobs and additional vitality to downtowns and specific neighborhoods, he told BusinessWest, but the libraries themselves act as community resources vital to residents.

“It’s much more than the children’s room and a lending library,” he said, adding quickly that these components are obviously still part of the equation. “It’s a community information hub, and that’s so important in communities where there is a lot of need.”

For this issue and its focus on education, BusinessWest looks at the East Forest Park branch project and the many ways in which it captures the changing landscape for libraries and shines a bright spotlight on their growing, not waning, importance to those who walk through their doors.

Blumenfeld calls it his cubicle.

This is the small office cleared for FDA on the fourth floor of Springfield’s Main Library on State Street, one of the city’s enduring landmarks.

Two desks have been shoehorned into the space, which is a command post of sorts for the Promise Kept campaign, which was launched in September and will continue for the next 15 months or so.

Blumenfeld, who has operated out of such spaces at more libraries than he can count, will be in his cubicle at least two days a week by his estimates as he coordinates the campaign and makes the case for individuals, families, and businesses to donate.

It’s a strong case, and, as noted earlier, one he’s made often in this region over the past several years. Indeed, FDA coordinated the campaigns for new libraries or expansions in West Springfield, Chicopee, and Holyoke, among many others.

He said Springfield’s campaign, already off to a solid start, is similar to many others in that many of those being asked to contribute have questions about the future of both books and libraries.

“The challenge we always have in a campaign is to get donors to understand that the library of the future serves many of the same functions as the library they think about,” he explained. “The Holyoke Public Library was founded with the motto ‘the People’s College,’ and that’s really the sense of what a library is. It’s a learning commons for everyone, and all you have to do is walk through the door.”

The case for libraries is best summed up in those phrases used by Fogarty earlier. Indeed, while libraries will always be a place to borrow a book, video, or piece of music, and also a place where people can find quiet and a place to read, study, and conduct research (often with others), these facilities now level that playing field Fogarty mentioned.

And this role takes on new meaning in communities like Springfield, where many families live at or below the poverty level and Internet access is often beyond their budget and, therefore, their reach.

To get her points across, Fogarty talked about what would be a typical day at the main branch, and specifically the computer room.

“When we open the central library, within five minutes, all of the computers are being used,” she said, adding that there are 45 of them currently, and they will be used by roughly 100,000 visitors over the course of a year.

“People are waiting to get in,” she went on. “And we have a reservation system; if a computer isn’t available when they arrive, they can make a reservation for later in the day — and they do.”

There’s a reason for this — actually, several of them, she said.

“There is a digital divide in this country; if you have a computer at home and you have sufficient Internet access, your children are able to do their homework at home, you’re able to do research at home, you can apply for a job at home. If you don’t…”

Her voice tailed off as if to say, before she actually said it, that those on the wrong side of this divide are at what would have to be considered a societal disadvantage.

“You can’t apply for a job right now unless you do it online,” she went on. “That’s the way you can do it. So we’re bridging that digital divide for a large number of people.”

And this bridge involves more than a computer and a mouse, she went on, adding that library staffers will assist patrons with setting up an e-mail account, with writing a résumé, and in countless other ways.

They’ve been doing all that in what has passed as the East Forest Park branch for the past 15 years or so. This would be the small storefront, a former video store, actually, on Island Pond Road. There are six computers at that facility, said Fogarty, adding that there will be 56 at the new, 17,000-square-foot, single-story branch to be built on the grounds of the Mary Dryden School on Surrey Road.

The new facility will feature a so-called ‘teen zone,’ a children’s area, and “quiet study rooms,” said Blumenfeld, adding that now, perhaps more than ever, libraries have become gathering spots and resources for all members of a family.

Fogarty agreed, adding that the Springfield City Library has literally thousands of programs for young people and adults alike, and they are focused on everything from workforce training to adult literacy; from poetry to creative writing. And many of them have waiting lists.

The tagline for the Springfield City Library reads “All Yours, Just Ask.”

Those four words speak volumes — in every way, shape, and form — about this institution and all those like it. There is so much there for the visitor, and all he or she has to do is ask.

It’s always been that way, but today, when there is a digital divide that represents an extremely deep crevasse, the importance of libraries, contrary to what may be becoming popular opinion, has never been greater.

And in that respect, ‘Promise Kept’ is more than a slogan attached to a fund-raising campaign — it’s an operating mindset.