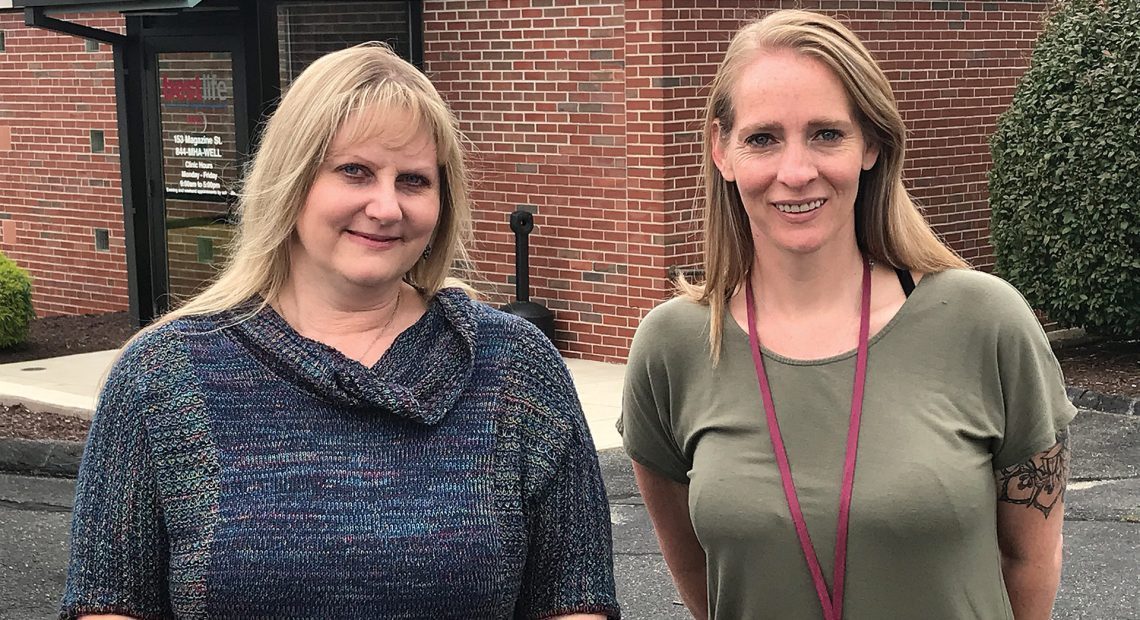 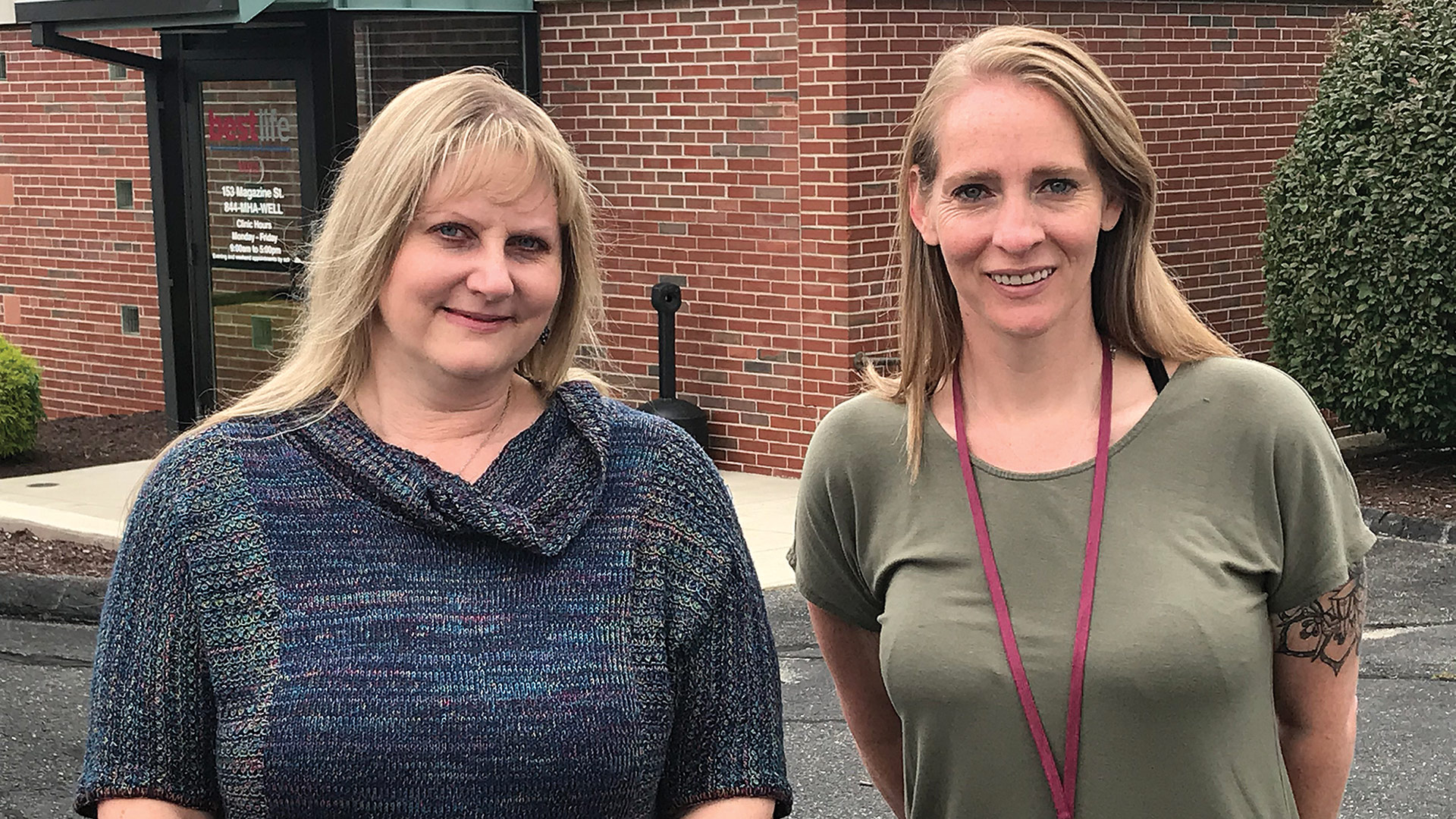 MHA’s Alane Burgess (left) and Kristy Navarro say social isolation during the pandemic has been problematic for young people.

According to the Centers for Disease Control and Prevention, the national suicide rate declined slightly in 2019, the last year for which full statistics are available.

Unfortunately, the latest government data does not take into account the arrival of COVID-19 early in 2020. But area mental-health professionals know what they’re seeing and hearing almost 20 months into the pandemic.

Amanda Hichborn, director of Outpatient Clinical Services for River Valley Counseling Center’s Westfield office, said the impact of COVID has in some ways been a double-edged sword when it comes to suicide risk.

“The risk factors for suicide have definitely increased,” she said. “At the same time, we’ve also seen protective factors that have come into play.”

On top of fears about our health, Hichborn explained, the pandemic also affected basic needs such as food — as evidenced by shortages in grocery stores — as well as the ability to sleep well, employment security, and freedom to move around wherever and whenever we want.

At the same time, she has seen people spend more time with their family, increase their fitness by taking walks to get outside, and improve their diets by eating more at home.

“Vulnerable groups like disenfranchised people were already struggling with basic needs. Throw the pandemic on top of it, and their needs are impacted tenfold.”

“These protective factors work to actually decrease the risk of suicide,” Hichborn said. “When we go through something as a community, we feel a kind of connectedness, which also helps decrease suicide risk.”

However, she was quick to point out that, while we may all be in this together, we’re not all in the same boat.

“Vulnerable groups like disenfranchised people were already struggling with basic needs,” she said. “Throw the pandemic on top of it, and their needs are impacted tenfold.”

Young people in particular have had a tough time with the pandemic. Alane Burgess, clinic director of the BestLife Emotional Health & Wellness Center at the Mental Health Assoc. (MHA), noted that, while depression and anxiety have increased for all ages, it’s been particularly tough for adolescents, and suicidal thoughts and attempts are on the rise.

“With adolescence, there is a sense of permanency that things won’t change,” Burgess said. “When they experience social isolation, it feels like forever to them.”

Kristy Navarro, a clinical supervisor at MHA, said keeping young people safe in a pandemic can run counter to how parents raise their kids.

“Normally we want our kids to share, but now we’re saying, ‘don’t share, and don’t touch anything,’” she said. “When we discourage sharing things with friends, it can be a hindrance to the growth and development of young children and adolescents.”

Dan Millman agrees that the pandemic has affected young people in unique ways.

“It can be hard for young people who miss rites of passage like graduations and other celebrations and rituals,” he said. “Another part is the social stuff like having fun with friends and being independent. All of that has been much harder to do with the pandemic.”

Millman is the director of ServiceNet’s DBT program, or dialectical behavior therapy, an evidence-based approach to psychotherapy that can be effective with people who are exhibiting self-destructive behaviors. 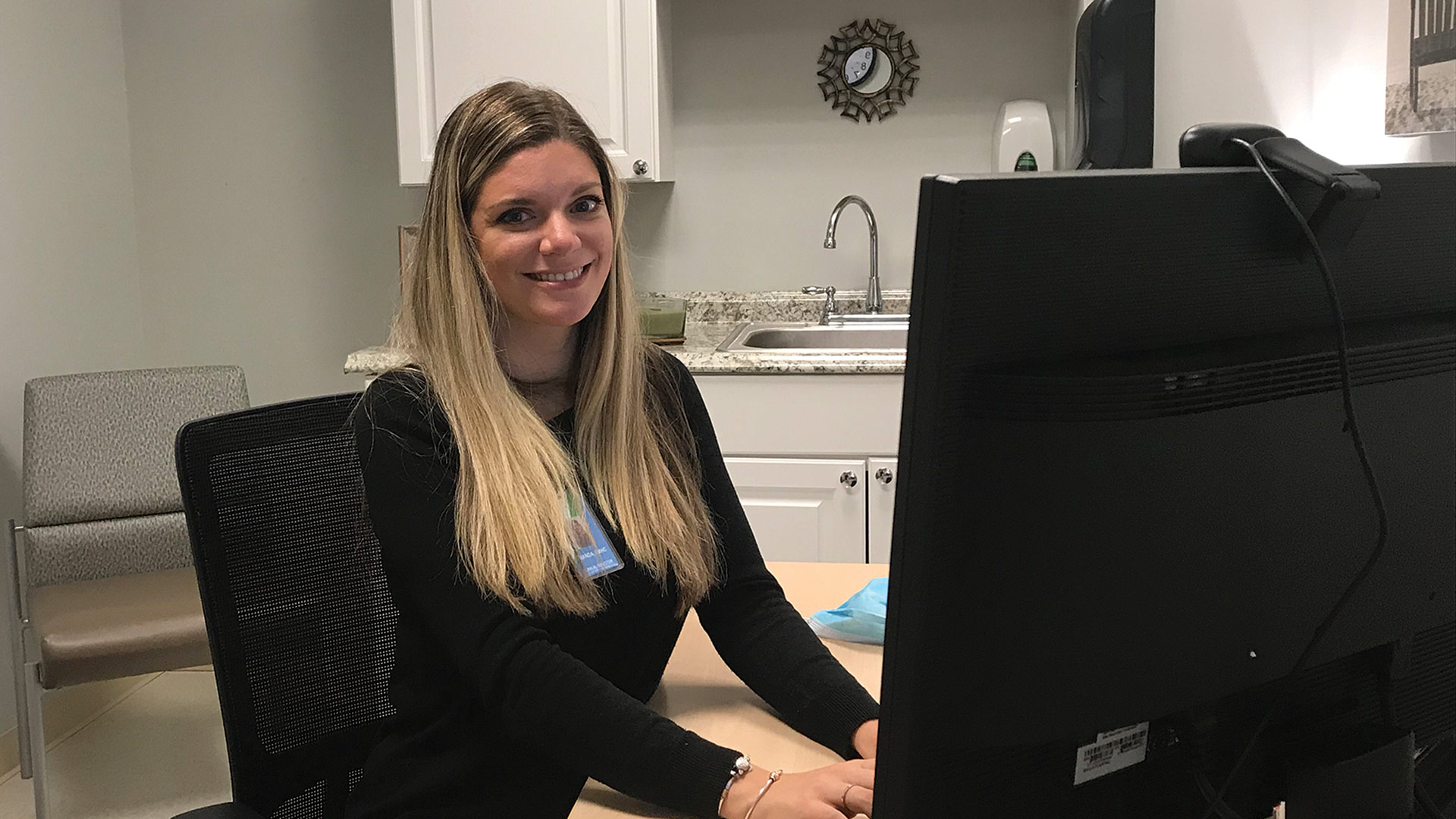 Amanda Hichborn says staying home more has benefited people’s health in some ways, but the pandemic has had plenty of negative effects, too.

DBT differs from conventional therapy in that it follows a more structured protocol. The six-month program is designed to give clients the skills to manage the urges to engage in self-harming behaviors. Millman described four main techniques of DBT:

• Mindfulness, a skill that helps the client focus on healthy coping skills to prevent negative thought patterns and impulsive behavior, and which is integrated throughout DBT techniques;

• Distress tolerance, which is most effective in improving a moment with soothing or distraction skills. “The point of this skill is to help survive the crisis without making things worse,” Millman said;

• Emotion regulation, a technique that allows clients to strengthen their emotional resiliency to more effectively navigate powerful feelings; and

• Interpersonal effectiveness, which Millman described as developing assertiveness skills so clients can ask for what they want, better address their needs, and set limits when necessary.

“The point of DBT is to help people feel like their life is worth living and has improved,” he explained. “It’s not a good outcome to have someone stay alive while still suffering the torment they have been feeling.”

Relieving the torment starts with allowing the client to accept they have suicidal thoughts. In this context, acceptance means acknowledgement, not approval.

“When someone has suicidal thoughts, it’s a sign to them that something is wrong in their lives that needs to change,” he said. “Acknowledging those thoughts can actually be protective for the person.”

Another area of DBT involves stepping into painful emotions. Millman explained how human instincts try to protect us and avoid things that make us feel anxious, so we tend to put them off. Avoiding a difficult conversation is a good example of something that needs to be done, but creates anxiety before we do it.

One way clients deal with emotional pain is to engage in self-harming behaviors such as cutting themselves.

“We ask the client to just sit with the urge to cut themselves without acting on it,” he said. “In that way, we are asking them to step into the pain. It’s easier said than done, and it’s really challenging.”

The point is to show the client they confronted the moment and got through it. A distraction like a funny video or throwing themselves into an activity can also help, he added. “Once they are ready for the next step, they can use some of the other skills to influence the emotions that are underneath the urge and begin to think differently about it.”

The pandemic looked like it was going to subside this past spring as warm weather arrived and many people were getting vaccinated, but then the Delta variant reared its head, and vaccine levels plateaued. While that created frustration for everyone, it was particularly hard on people with pre-existing conditions related to anxiety and depression. 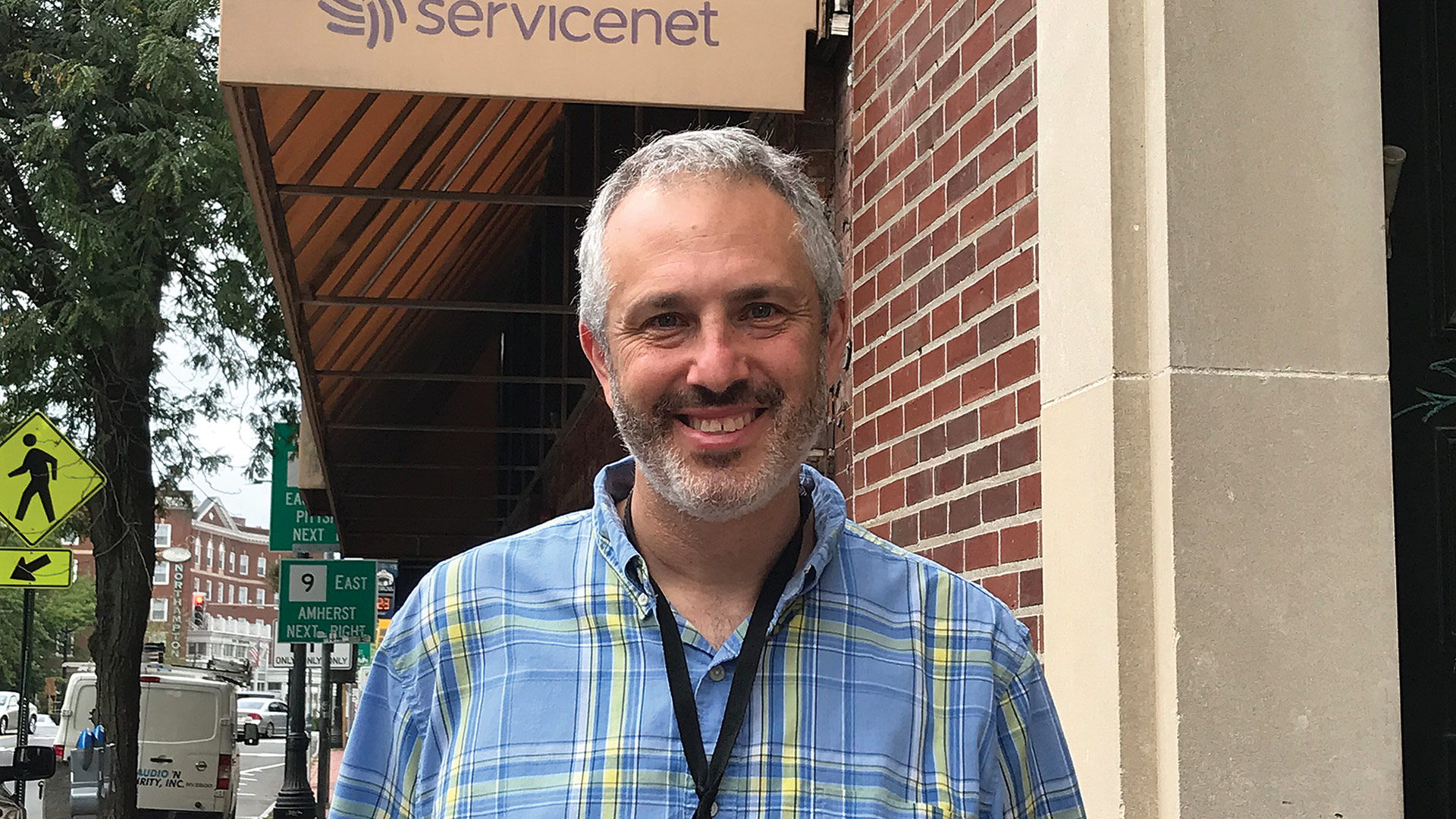 Navarro said the confusion of starting to feel safe, and then, suddenly, not so safe, can lead to hopelessness, a huge risk factor in suicidal tendencies. A person who feels hopeless will often make vague statements such as “I can’t do this anymore,” “I don’t want to be here,” and “this is too hard,” she noted.

During the pandemic, social media can either help people feel more connected or lead to more hopelessness. Hichborn noted that, while it’s good to see friends and loved ones from across the country, social media also creates misleading impressions. The people smiling in the photo look happy, but they might be feeling lots of stress in their lives.

“The effect of social media is counterintuitive because it makes us feel more connected upfront, but in the long run makes us feel a lot more depressed and isolated,” she said.

Two other groups emotionally affected by the pandemic are very young children and seniors. Hichborn said she sees clients from ages 3 to 77. When a parent with young children dies, it can create a suicide risk.

“The child has a concept of mom or dad dying, and they want to see them again,” Hichborn said. “The child might feel like they have to die in order to see their mom or dad.”

Older people who are at risk of suicide tend to show warning signs such as saying goodbye to people, giving away their prized possessions, and cleaning out their house. When family members see this type of behavior, it’s important to talk with the person.

“If you see any suicidal ideations or any warning signs within a family member, don’t beat around the bush — ask them directly, ‘are you feeling suicidal? Are you having thoughts of harming yourself?’” she said.

If they’re not having those thoughts, Hichborn added, the question will not encourage people to start thinking about it. “It doesn’t work that way.”

In addition to asking direct questions, Burgess suggested active listening and being supportive.

“Sometimes the most important thing to do is listen and acknowledge the person’s experience,” she said. “They don’t need you to fix it, they just want to be heard.”

Hichborn recommends a safety plan displayed on the refrigerator to help a person who might struggle with suicidal thoughts.

“The plan can have support people to call and emergency numbers like the police, suicide hotline, or poison control,” she explained. “Everything is written out in a place that’s easily seen, so when someone isn’t thinking straight and their thoughts are all over the place, they don’t have to think about what to do — it’s right there.”

Though we might feel alone in our thoughts, Burgess encouraged people to reach out to those they are comfortable with to talk about their feelings.

“What’s profound about the pandemic is that it’s a collective experience everyone is going through,” she said — and one that no one should have to confront alone. 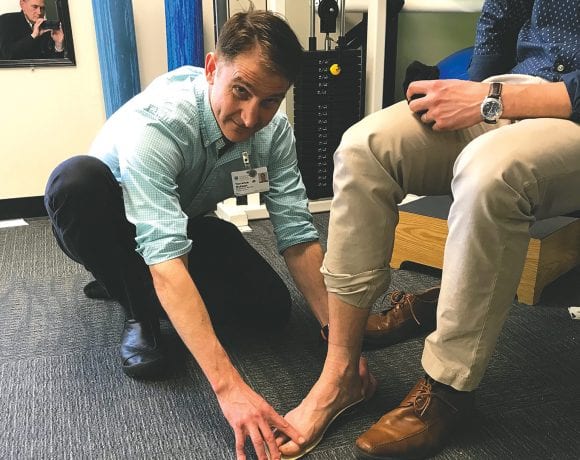 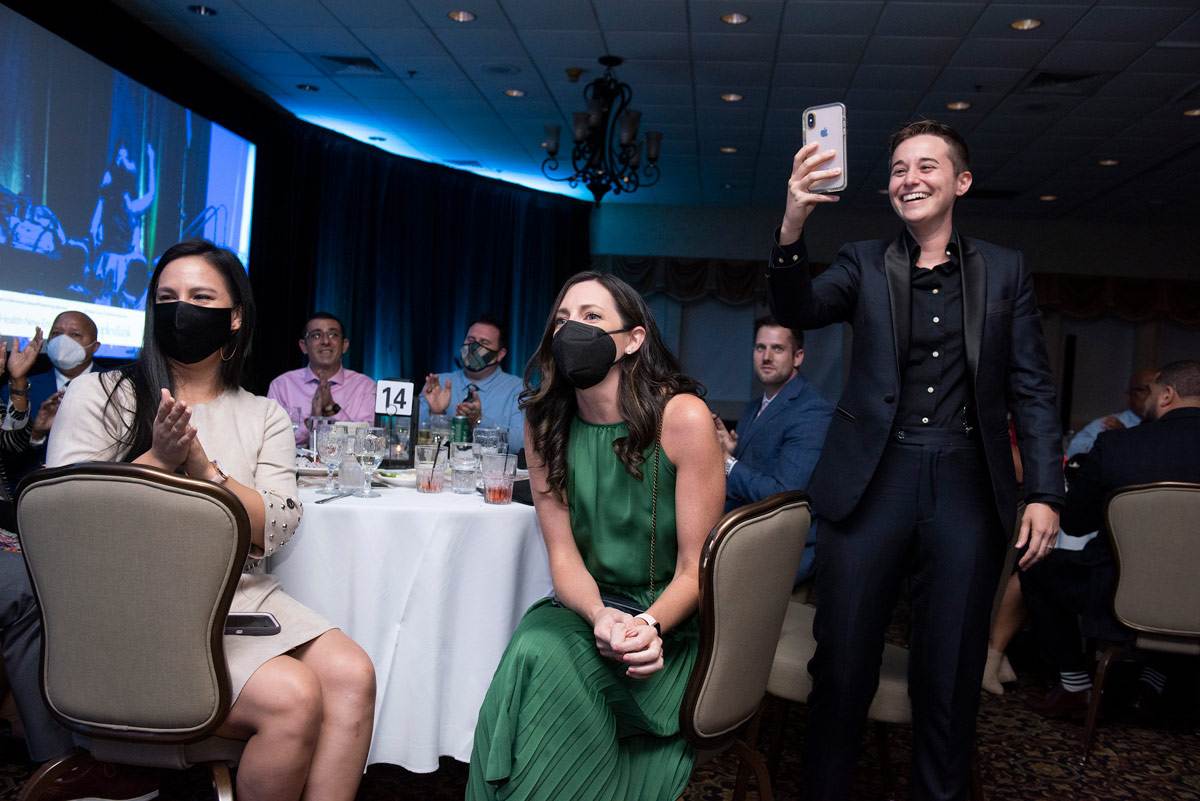