Andy Yee, who passed away Thursday, was the true definition of a serial entrepreneur. Even though he had a number of businesses, especially restaurants, he was always looking for that next challenge, that next opportunity. 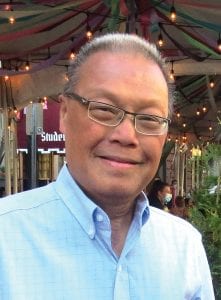 And he took on each project with an abundance of energy and enthusiasm that was as inspiring as it was contagious. And many of his undertakings were not just business ventures — they were game changers in our local communities, difficult yet successful efforts to save institutions such as the Student Prince in Springfield and the White Hut in West Springfield from being relegated to the past tense.

In 2015, BusinessWest named Yee and several of his business partners, including Peter Pan Chairman and CEO Peter Picknelly and Kevin and Michael Vann, as Difference Makers for their efforts to save the Student Prince. And that title certainly suited him. He was a difference maker as a business owner and entrepreneur, as a family man, and as a leader in the community.

We sincerely hope this project moves forward. It will be difficult without his leadership, his enthusiasm, and his ability to get the tough projects done. But when it’s complete, it will be a fitting tribute — yet another one — to how Andy Yee had the ability to not only open a business, but change a community for the better, and make a huge difference.

BusinessTalk with Andy Yee, president of the Bean Restaurant Group

BusinessWest Editor George O’Brien talks with Andy Yee, president of the Bean Restaurant Group. The two discuss the ongoing plight of area restaurants as they battle the pandemic, ever-tighter restrictions on their operations, and the onset of winter. They also discuss the various forms of relief restaurants are receiving and whether they will be enough to help them withstand the many challenges they are facing. It’s must listening, so join us on BusinessTalk, a podcast presented by BusinessWest in partnership with Living Local.

SPRINGFIELD — Peter Pan Bus Lines​ and the Bean Restaurant Group​ are teaming up deliver lunch to first responders and frontline workers on a Peter Pan bus. The mission is to show support and gratitude to local healthcare heroes while supporting local restaurants. The first delivery will take place Wednesday, April 8, with food provided by Frigo’s.

To donate to the campaign, click here or visit peterpanbus.com/stuff-the-bus-feed-the-fight-western-mass.