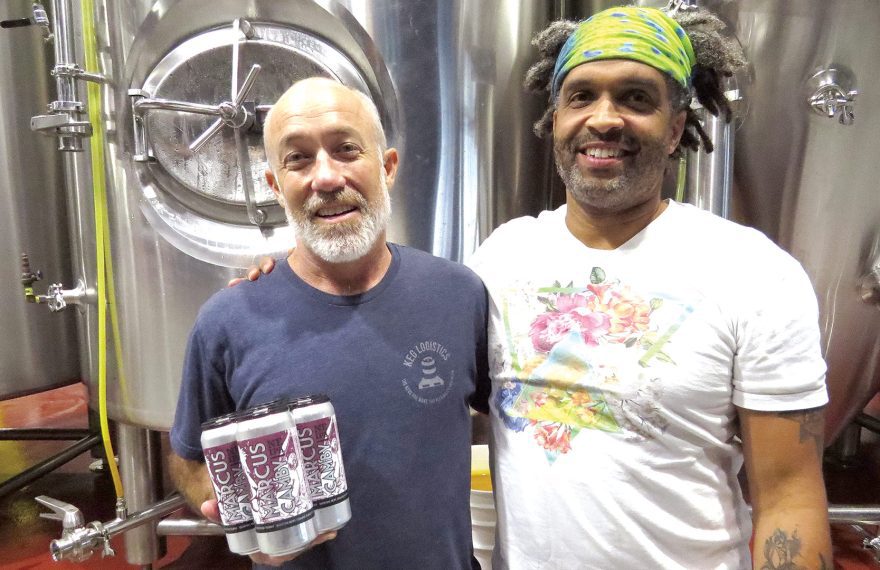 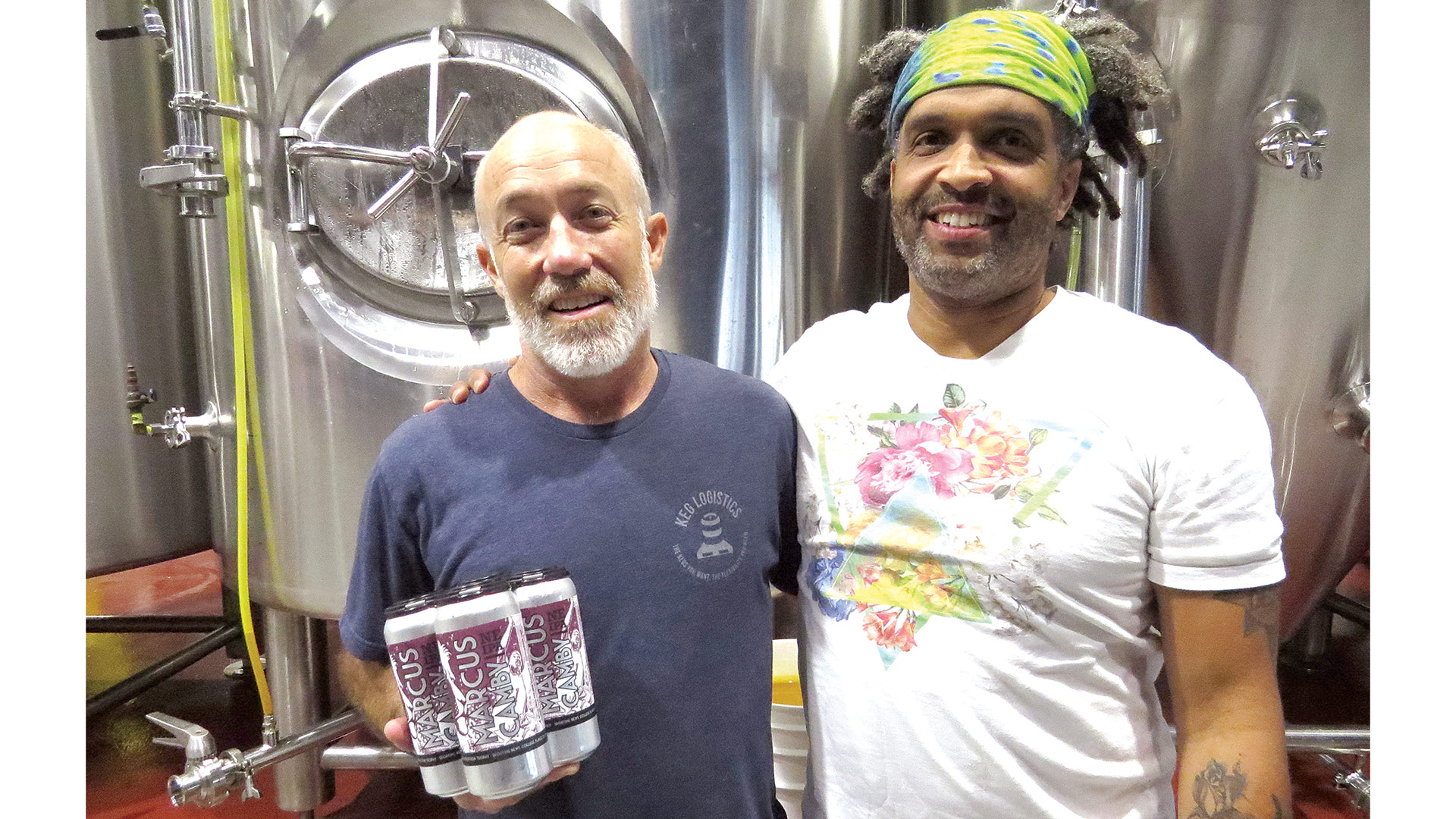 Mike Yates, left, and Ray Berry agree that expansion into Amherst is a common-sense move for the company.

When asked how he would eventually become business partners with Marcus Camby, the former UMass and NBA star, Ray Berry, founder of White Lion Brewery, leaned back in his chair as if to indicate it was a bit of a long story.

It starts with Travis Best, another former NBA player who made his first headlines while playing for Springfield’s Central High School. It was Best who put together several annual Basketball Hall of Fame enshrinement weekend events, including a post-induction gathering. Following the opening of White Lion’s downtown Springfield operation just over a year ago, Best was looking to include the company in the festivities — and did.

Indeed, Best and Berry would collaborate with the city on a block party on Bridge Street during enshrinement weekend — the same weekend, it turned out, that UMass Amherst would be honoring Camby, Julius Erving, and John Calipari with statues in their honor on campus. Best and Berry decided to reach out to Camby to see if he wanted to co-host the event in Springfield, which he did.

“Marcus was all in — he was already in town, and he was excited to be part of what we were doing,” Berry recalled. “We shut down Bridge Street, rolled up the garage doors, and had some entertainment; it was our first grand event at our brick-and-mortar spot. At one point, I think we had 700 people between the brewery and the block-party environment. It was a beautiful evening downtown.”

Fast-forwarding a little, Camby became more than a little impressed with the White Lion operation and Berry’s status as one of the very few minority brewery owners in Massachusetts — so much so that he attached his name to an IPA produced by White Lion. And later — we’re moving very quickly now, but will go back and fill in some detail in a bit — when Berry was presented with an opportunity to expand his footprint and bring the White Lion brand to Amherst with a location in the heart of downtown, Camby agreed to come in as a partner.

The venture will be called White Lion Brewing Amherst, and will be based in a location that has been making headlines in recent months — 104 North Pleasant St., home to the recently opened Drake, a live-event venue that is already fulfilling its vast promise as a destination for music lovers from across Western Mass. and far beyond.

The White Lion taproom will be located just below the Drake in space that was formerly the High Horse restaurant and, before that, Amherst Brewing, where Mike Yates served as head brewer — before working behind the bar at High Horse.

He now has that same title at White Lion, so this new venture amounts to going home for him.

And with that perspective, he believes the White Lion brand is in the right place at the right time, and with the right business partner.

“It will feel good to be back there. It’s a great little town — I love Amherst,” Yates told BusinessWest. “I think this is going to be a big hit here. Since Amherst Brewing left downtown, there’s no brewery in the downtown area. This is essentially a tourist town — every year you have a new crop of students coming in and parents looking for a place to go for lunch or dinner, and a brewery is always a good option.

“I think this is going to be a big hit here. Since Amherst Brewing left downtown, there’s no brewery in the downtown area.”

“Combine that with our partnership with Marcus and our establishment’s reputation here in Springfield as a prominent player in the brewing business, and I think it will be a big win,” he went on. “I think they hit a big home run with the Drake — that’s what Amherst sorely needed — and we will be another big piece of the puzzle.”

For this issue, BusinessWest looks at how this new venture came together, and what it means for Amherst — and White Lion.

Berry told BusinessWest that he recently took part in a panel discussion before a convention of craft brewers at the Samuel Adams facility outside Boston.

The subject being addressed by the panel was satellite facilities, and, more specifically, when and under what circumstances they should be considered.

Summing up his remarks, Berry said he told them, “from a business lens, if the situation if right, and you’re not over-leveraging yourself, it could make sense for that brewery’s respective business model.”

That is certainly the case with this new location in Amherst, he said, adding that it makes sense on a number of levels. “Amherst is a great town. It’s a natural fit for White Lion and its progression.”

So much so that the Amherst Business Improvement District and other stakeholders, diligently trying to replace the lost Amherst Brewing operation, initiated talks with Berry back in 2019, by his recollection, about bringing his brand there.

He listened, but back then, he was devoting almost all of his time and energy to opening his brewery and taproom in the former Spaghetti Freddie’s location in Tower Square, a project that would eventually be slowed — as in slowed — by COVID-19 and its profound impact on construction and the larger renovation efforts at Tower Square.

When that location was well on its way, Berry and Amherst officials essentially picked up where they left off.

“They kept in communication — the conversations would come and go,” said Berry, adding that he eventually went to Amherst to look at some spaces there, including the former High Horse/Amherst Brewing location, which was attractive, but far more space than he needed. Consumed with opening his Springfield location, he put the Amherst project, if it could be called that, on pause. 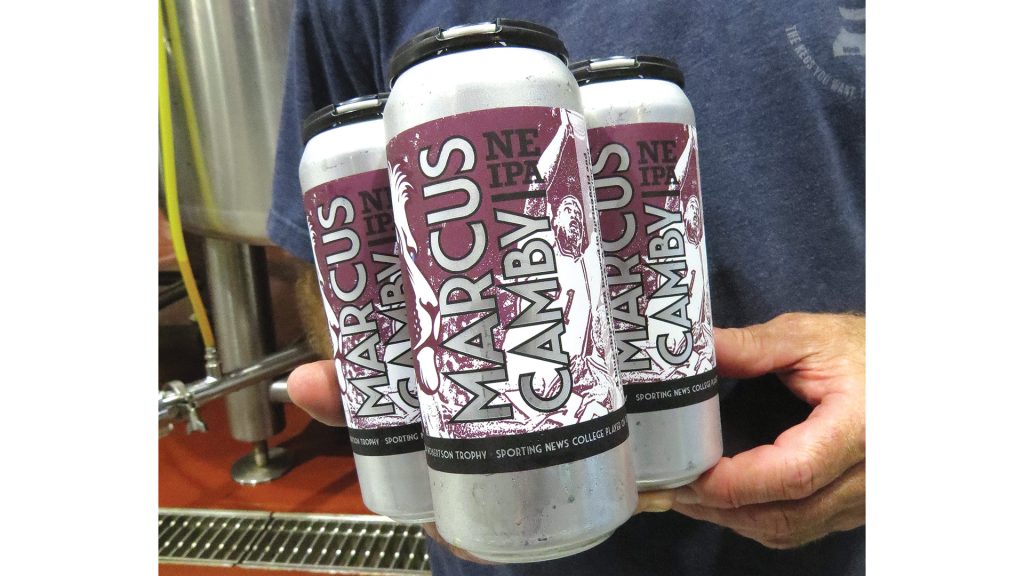 Marcus Camby has already attached his name to an IPA, and now he will take his involvement with White Lion Brewery to a higher level as a partner in the Amherst venture.

And it stayed there until, by coincidence (again), Camby was back in Amherst for event. While there, he and his business agent were inquiring about the “space across from Antonio’s Pizza” — the Amherst Brewing space.

That conversation started a dialogue between the two about what whether that location was available and what could be done with it, conversations that got more serious over time, prompted more visits to Amherst, and eventually spurred consideration of not the Amherst Brewing site (because it wasn’t exactly available at that time) but one just down the street, owned by the same party.

But then, the space under the Drake did become available, and the parties involved made an important pivot — yes, that’s a basketball term — back to 104 North Pleasant St.

With that backstory now complete, Berry and Yates have their focus on the future, one they believe holds a great deal of promise, because of the community, Amherst, the specific location, and what White Lion can bring to the table.

“From a White Lion lens, this makes total sense, and for a number of reasons,” Berry said. “For starters, the Drake is iconic. What they’re trying to do on that second floor is a game changer for the downtown Amherst community. To be below that music venue has a number of benefits, from a business perspective.”

“To be on the Main Street corridor in downtown Amherst has a number of benefits from a business lens,” he went on, adding that, while Springfield and Amherst are vastly different in terms of size, he sees many similarities in their downtowns and the work done by the two communities’ business improvement districts and efforts to bring more vibrancy to their respective downtowns.

“We see the many benefits that come with being in the heart of downtown Springfield, and we see the benefit of the partnership and the work that our own Business Improvement District does day in and day out, which includes special programming with White Lion,” he went on. “And the leadership at the Amherst BID has a similar fabric relative to their approach with downtown Amherst; they encourage and participate and facilitate and coordinate outdoor programming, special events, and business-improvement initiatives. Based off of what we’ve witnessed and knowing what they’re doing, it made total sense to be right in the heart of downtown Amherst.”

What also made sense, he said, was to meld the White Lion brand with the brand that Camby has developed, especially in the community where he originally made his mark a quarter-century ago.

“Amherst is a great town. It’s a natural fit for White Lion and its progression.”

Berry said preliminary design work is underway, and the Amherst facility should be open for business by the end of December, in time for the winter semester of classes at UMass and other area schools.

The facility will be a taproom, restaurant, outdoor social space, and a small pilot, nano-brew house — the main production will still be in the Springfield location — one that will allow for what Yates called “one-off” experimental ales.

“It will be a smaller scale — probably a three- or five-barrel brew system, which will allow us to spread our creativity wings a little and try some things that we couldn’t afford to do on a large scale like we have here in Springfield,” he explained. “It will be fun; I’m excited. Springfield’s great, and Springfield’s coming along, but it will be great to do a little bit of both.”

Summing up his thoughts on the two communities where White Lion will have a presence, Berry said Springfield and Amherst have “similar bones.”

By that, he meant they’re trying to achieve the same things in their downtowns — specifically the establishment of an eclectic mix of businesses that complement one another and, together, create a destination.

White Lion has become a key piece of this puzzle in Springfield, and Berry is expecting the same in Amherst, especially with his new business partner attached to the project.

Together, they’ll be making a full-court press in a town where Camby is synonymous with success.

“Our brand is built on the community’s fabric, creating a diverse, inclusive, and fun place to be in downtown Springfield,” said White Lion Brewing Company business partner and head brewer Mike Yates. “We look to replicate much of that exciting vibe in downtown Amherst. As a UMass-Amherst alum and a resident of the Happy Valley, I could not be happier to be back in Amherst. I built much of my professional brewing career here and I look forward to bringing brewing back to downtown Amherst. We plan to activate 104 North Pleasant St. with an eventual nano-brew house offering one-off experimental ales, a test kitchen, taproom, and outdoor social space.”

Gabrielle Gould, executive director of the Amherst Business Improvement District, said the partnership the culmination of an ongoing three-year conversation with White Lion founder and president Ray Berry. “Collectively, patience appears to have paid off — a partnership between White Lion and Marcus Camby is an all-star win for the business district.

“The Amherst BID’s vision is to curate businesses that complement our already outstanding and loved small businesses,” she went on. “This is just the beginning as we rebuild and create a vibrant downtown for residents, scholars, and visitors to enjoy over and over again.”

Said Camby, “our partnership extends beyond a conventional business venture; it was important for me to engage the greater Amherst community. I have witnessed White Lion do amazing things in the greater Springfield area; I am confident we can capitalize on that momentum and utilize my career relationships to enhance the downtown Amherst experience. Lastly, the centerpiece of success is to work with Umass-Amherst and the local education community to create opportunities for the next generation of leaders.”