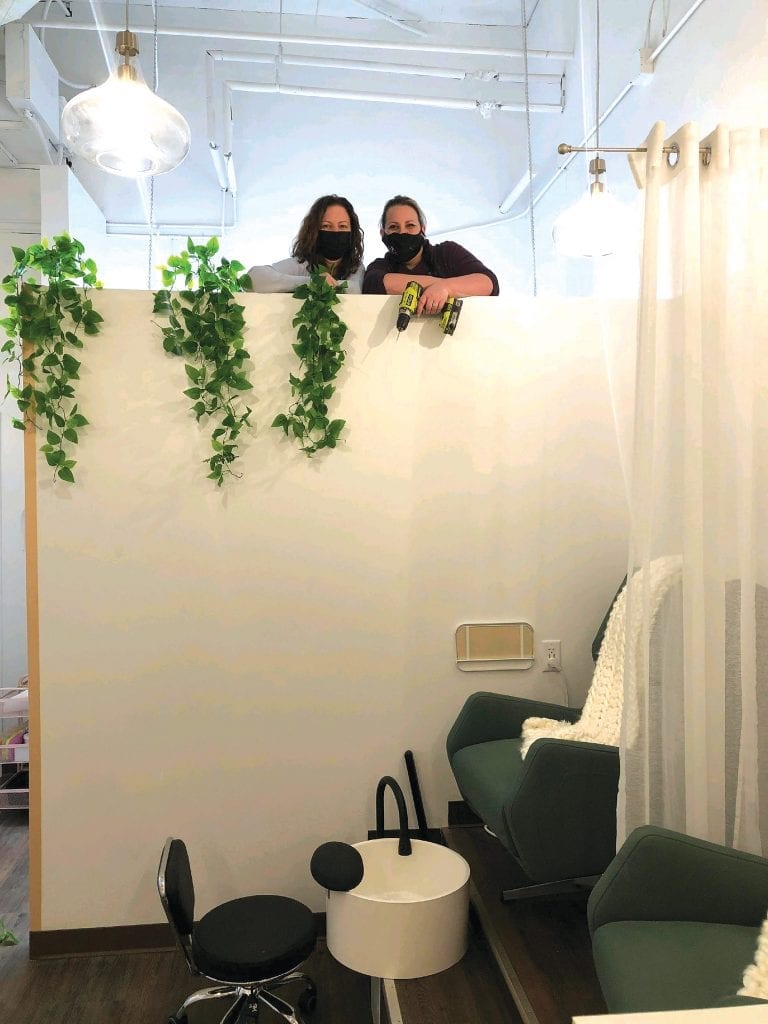 When spas were allowed to reopen several months ago following a statewide economic shutdown, clients of SkinCatering, LLC were happy to return — even if booking became a little trickier.

“I haven’t been able to meet the demand,” owner Leanne Sedlak said, noting that some staff couldn’t return during a raging pandemic because they or a family member were immunocompromised, while fewer clients than normal were allowed in the space, and extra time had to be added in between appointments for cleaning and sanitizing.

“I feel like we’ve been limping along in a way,” she added. “It is frustrating for the client, and it’s hard to tell them, ‘no, we’re booked up for the next three weeks because we have two people working.’”

Meeting that demand will be easier now that SkinCatering has moved downstairs to the main level of Tower Square in downtown Springfield, in a larger, renovated space offering massage, skin care, hair and nail treatments, among other services.

“It’s nice coming down here,” she said. “We can offer them more relaxing experiences, and we have a little more space as well to keep everybody spread out, so we can have more services happening at the same time.”

Sedlak and Kim Brunton-Auger, a licensed aesthetician who joined the company in 2012 and now serves as vice president of skin-care development, celebrated the move downstairs with a VIP event last week, taking time amid the bustle to recognize the challenge of keeping their enterprise not only alive, but thriving during a year of unprecedented challenge for small businesses.

“We’re definitely blessed because we know other businesses had the opposite experience, so our heart goes out to them for sure,” Sedlak said. “We’re very grateful; we know how fortunate we are in that regard.”

Like many who start down the path of entrepreneurship, Sedlak did so out of necessity. In 2010, the U.S. was dealing with a different sort of economic crisis, the Great Recession, and both she and her husband were laid off from their jobs.

So, when she finished her time in massage school, she went into business for herself with a venture she would call SkinCatering. At first, it was a traveling enterprise, with Sedlak taking her massage table door to door.

“We can offer them more relaxing experiences, and we have a little more space as well to keep everybody spread out, so we can have more services happening at the same time.”

“I’d load up my Tahoe with all my stuff and drive to my first appointment of the day, and that would pay for my gas the rest of the day,” she recalled. “To be in this space now, to build something like this, and to be in business for 10 years, feels validating.”

Since opening a salon in Tower Square toward the end of 2013, the company — mainly focused on massage and skin care — has grown significantly over the years, and the new space will allow for a salon and nail services, which had been a dream of Brunton-Auger’s for some time.

These days, SkinCatering offers massages, body wraps, waxing, Reiki, facials, an infrared sauna, and more. The company formulates its own line of skin-care products that don’t use harsh chemicals and are vegan, gluten-free, and ‘cruelty-free,’ meaning they’re not tested on animals.

“That’s been the mission all along,” Sedlak said of the company’s ‘clean’ products. “It’s a big trend now, and I hate using the word ‘trend’ because it’s not going away; it’s a way of life now. I love it when other estheticians discover our products and their clients have great results.”

Indeed, SkinCatering sells its products in other salons, and is also commissioned by other companies to create private-label products. Both Sedlak and Brunton-Auger would like to see the skin-care line grow in the future. 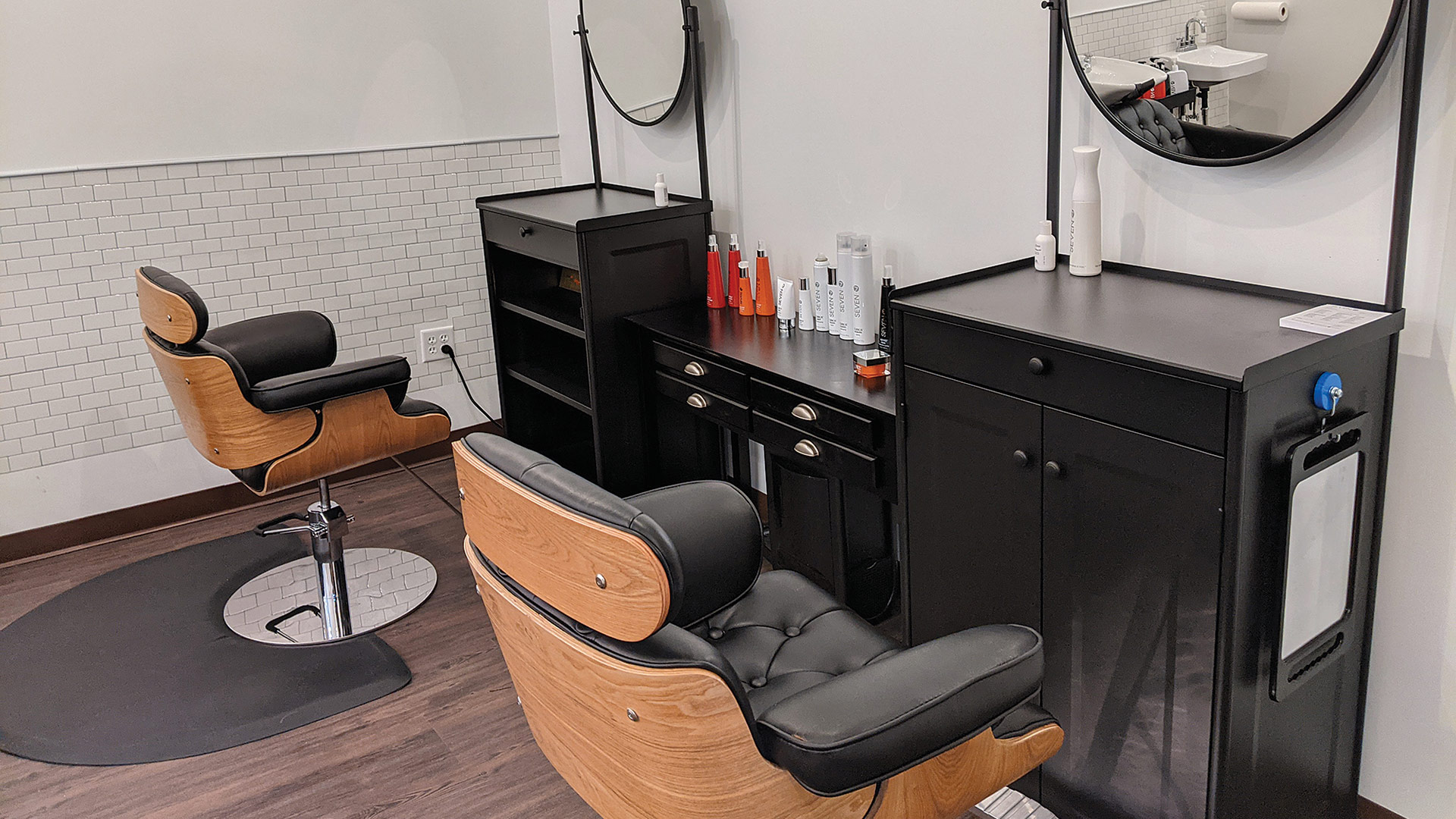 While retaining its original location upstairs for offices and a product-development laboratory, the new space downstairs is completely dedicated to client services, including four rooms for massages — including always-popular couples massages — and skin care, as well as two hair stations, two stations for manicures and pedicures, and an infrared sauna for one or two people. The latter is perfect, Sedlak said, for people who might want to try a sauna experience, but are intimidated by a larger, group sauna at a gym.

Equally important is a comfortable, subtly lit ‘tranquility area’ where clients can sit between appointments for multiple services, or while waiting on a friend, while sipping tea or water — a more important amenity now that each piece of furniture and surface must be well-sanitized between treatments. “It’s part of the spa experience now instead of there being an awkward pause,” Sedlak said.

“We have to take extra time to super-sanitize,” Brunton-Auger added. “Back-to-back isn’t what it used to be.”

As for other COVID-related changes, staff wear masks, aprons, goggles, and — except in the case of massage — gloves, all of which are changed out between appointments.

The pandemic led to other pivots as well, including a switch to making hand sanitizer in the lab back in the spring. It was hard to find materials and containers at times, Sedlak said, but a small salon like SkinCatering was able to make the production switch more quickly than a large company could. In the meantime, even when the shop was shut down, product orders soared, as people still wanted to treat themselves.

“We had more skin-care orders in the first two weeks of the shutdown than we ever had in the pre-COVID days,” Brunton-Auger said. “It saved the business in some ways.”

She and Sedlak both expect the move downstairs to boost their business further, especially after the pandemic is in the rear-view mirror, whenever that might be. For one thing, they can stay open seven days a week; because the upstairs space was tucked amid offices, the floor essentially shut down on the weekends, and they would have to call to security to turn on the lights every Saturday; they kept it closed on Sundays.

Now, with a shop right next to the hotel entrance that draws more foot traffic, SkinCatering will be open seven days a week.

“We have been working on this project for almost two years, so to see it finally realized and ready to open is a great feeling of accomplishment, especially in the middle of a pandemic,” Sedlak said. “Tower Square has a history of being a hub of activity for Springfield, and we’re very excited to be a major part of why people are coming back into the city.”

And perhaps, eventually, not just the city, as the partners have explored the possibility of franchising their model.

“It’s a duplicatable system that works,” Sedlak said, especially in conjunction with hotels. “It’s an amenity for the hotel and the rest of this tower. It’s convenient, but I don’t want to be known as a convenience spa. I mean, I want it to be convenient, but when you come in, you also have an incredible luxury experience.

“And I don’t mean luxury like stuffy,” she was quick to add. “We want you to be relaxed. It’s the idea of lush, but you feel so comfortable here, you want to stay for a long time. The theme is an urban oasis. Modern, clean, funky, cool, but comfortable.”

While expanding a business during a pandemic may not be the most comfortable move for a small business, so far, Sedlak and Brunton-Auger are proving it’s the right one.