He was referring specifically to the pressures placed on the owners of multi-family dwellings and apartment complexes — and also to those landlords’ vendors — when, as a result of job losses forced by COVID-19, tenants cannot pay their rent, yet they’re protected from eviction by state and/or federal legislation.

“Multi-family property-management companies and landlords may be impacted disproportionately to the extent that there are forgiveness rules being discussed that would loosen rent-payment obligations and allow residential tenants to defer rent payments,” he said. “Clearly, unless there are provisions for the property owners to be made whole on the deferral or forgiveness of rent, it could create a variety of economic hardships to those property owners.”

But the trickle-up effect applies to virtually all types of commercial real estate and fallout from COVID-19, said Plotkin, president of Springfield-based NAI Plotkin, who tragically lost his mother to the virus earlier this month. He and other property managers who spoke with BusinessWest noted that the pandemic has forced the closure of all kinds of businesses and severely impacted the cash flow of almost all others. And this has obviously made it difficult for some to the pay the rent.

Some tenants have requested deferrals or other forms of help, but others didn’t exactly ask. They essentially just took them.

“I have some tenants, large, strong companies, that have sent letters saying they have stopped all payments to all vendors, landlords, etc. — period, without any time frame,” said Ken Vincunas, president of Development Associates, which has co-developed and now manages a number of office and retail properties in Western Mass. and Connecticut. “There was no explanation, really, just ‘we’re strong and we’ll be back, but … we’re not paying you.’”

Vincunas, who was in the process of writing e-mails to those at the top levels of those companies saying that such tactics were “un-American, like hoarding, and not the right thing to do,” said many other large companies have been far more diplomatic, with actual requests for 50% of rent payments, with offers to pay it back over the next six to 12 months.

Meanwhile, others we spoke with said they are working with tenants while also introducing, or reacquainting, them with the phrase force majeure (more on that later). 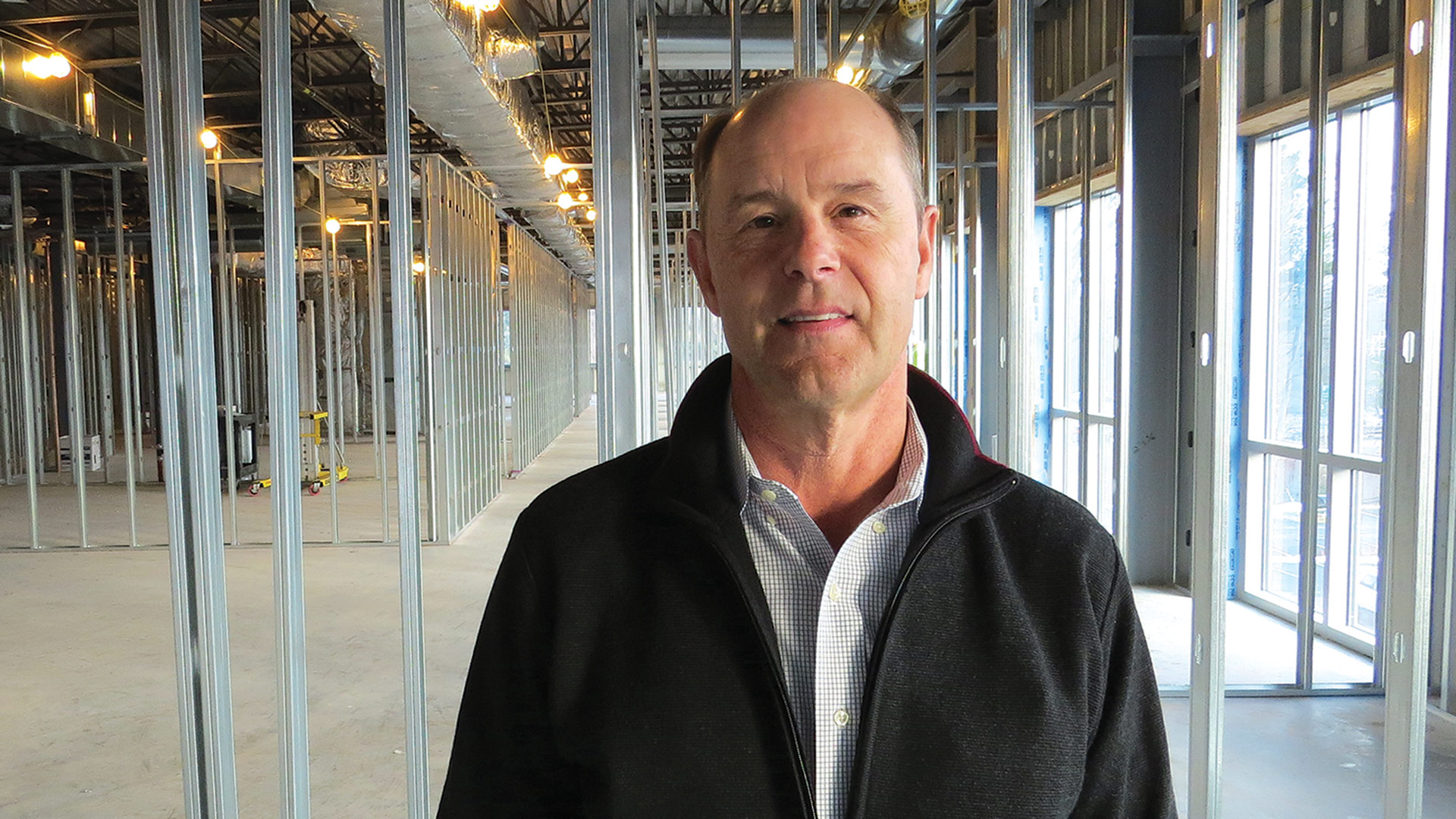 “There was no explanation, really, just ‘we’re strong and we’ll be back, but … we’re not paying you.”

But issues with collecting rent comprise just one of the many COVID-19-related challenges now facing commercial real-estate brokers and managers. Others include trying to do business differently, with many people working remotely; a dramatic slowing of activity within the market as companies pause to assess the damage and debate whether to move forward with planned deals; and emerging concerns that, as time goes by and companies see the advantages to having people work at home, companies may adjust their needs for space downward in the years to come, creating more problems for building owners.

“Businesses are getting a test run right now with working from home,” said Plotkin. “And if that works for them, there’s a strong possibility they might want to continue that, which would create havoc in the office-leasing market — and the office-investment market.

“Everything flows from the occupancy of your building,” he went on. “If your building becomes less occupied, it’s worth less, the market value goes down, and it triggers all kinds of things that are not necessarily good for the office-business market; that’s a clear fear that we have.”

Jack Dill, a principal with Springfield-based Colebrook Realty Services, which manages a number of properties across the region, agreed, but offered the hope that these ongoing experiments will lead some to conclude, as he has, that having people working in one place promotes collaboration.

“Work is a social enterprise — it’s about relationships, and it’s about trust,” he told BusinessWest. “It’s about the free flow of information, and that’s a lot harder when people are disbursed.”

As he talked with BusinessWest in mid-April, Vincunas noted that he had recently sent in his application for relief from the SBA-administered Paycheck Protection Program.

The application was made to essentially cover the costs of keeping the staff at Development Associates’ small office in Greenfield — located at the Greenfield Corporate Center, which the company manages — on the payroll.

And that’s just one of a long list of COVID-19-related hardships that the company is coping with. Indeed, Vincunas noted that one staff member, concerned about the health risks associated with coming to work, abruptly retired several weeks back, prompting some shuffling of duties and leaving the company generally short-handed.

“She didn’t want to leave the house,” he noted. “And that really set us back. She retired, and that was that, leaving us to pick up the slack.”

The story is generally the same with other property managers and brokers, who are, like businesses in virtually every other sector, coping with new realities when it comes to where and how work is being conducted. “Businesses are getting a test run right now with working from home. And if that works for them, there’s a strong possibility they might want to continue that, which would create havoc in the office-leasing market — and the office-investment market.”

As for business itself … on the brokerage side, things have slowed considerably, as might be expected given the vast amounts of disruption, fear, and general uncertainty caused by the pandemic.

But some deals have been completed. Vincunas said he signed on a new tenant at the beginning of the crisis, and some smaller build-out efforts — being undertaken “slowly and carefully to ensure social distancing” — are in progress.

Dill said the ‘deal flow,’ as he called it, is still moving, and his company closed on a few leases early in April. Properties are still being shown, he went on, albeit carefully, and while observing certain protocols, such as frequent use of hand sanitizer and sanitizing frequently touched surfaces.

But, like others we spoke with, he noted that, as the crisis has continued, the pace of business has slowed, and many who were in the exploratory stages of a potential move have backed off, waiting for the skies to clear.

“We’ve had some say, ‘interesting, attractive property, we’re interested, but things are so unsure, let’s let this settle down and we’ll re-engage at the other end of this.’”

Vincunas agreed. “At the beginning of this, I lost three hot deals that were going ahead, and none of them have come through,” he said, noting that one involved a building in Agawam he was going to buy and lease to an interested tenant. That interest is now gone.

“I had two other tenants who were going to lease space in a building we own already, and both of them said, ‘we have to slow down, things are changing … we don’t know,’” he went on. “Everyone has this uncertainty, and they’re thinking, ‘let’s not do anything for a while.’”

As for existing tenants, while some are experiencing something approaching business as usual — Vincunas has a kidney-dialysis venture and an ambulance company in his portfolio of tenants, and they certainly fall into that category — many have been forced to close their doors because they’re not essential, and most others are hurting to some degree.

Therefore, property owners are working with these tenants, offering some deferrals on at least a portion of their rent, Plotkin explained, noting that there is what amounts to a ‘base rent’ amount in each lease, as well as an additional amount to cover operating expenses, including security, cleaning, utilities, and others.

“The base-rent amount can be deferred, not abated, for a period of time,” he explained. “But the amount for operating expenses can’t, because we still have to keep the lights on, and we still have to pay the bills.”

This brings us back to ‘force majeure,’ a common clause in contracts that essentially frees both parties from liability and obligation when an extraordinary event or circumstance — such as a war, riot, hurricane, or flood — prevents one or both parties from fulfilling their obligations under the contract.

A pandemic certainly fits that description because some businesses have been forced to close by state decree, and almost all others have been negatively impacted in some way. It’s the force majeure clause that no doubt prompted those letters that Vincunas described earlier.

Dill said Colebrook is working with clients on a case-by-case basis, and is working with tenants experiencing hardships. Like the others we spoke with, he referenced the trickle-up effect, or the ripple effect, that tenants not being able pay some or all of their rent will generate.

“When you go to the next circle out … if landlords have tenants who can’t operate and therefore don’t have the cash flow to pay rent and other changes, that immediately impacts landlords and their ability to meet their obligations, including debt service,” he explained.

While coping with the present, those we spoke with are also looking to the future, and they project that the pandemic will change the landscape in perhaps profound ways.

For starters, Vincunas believes that the current trend toward more purchases being made online, with items — from groceries to books to sporting goods — being delivered to the home will continue, and it will drive need for additional warehouse space.

“So many things are drop-shipped,” he explained. “The warehouse and logistics business is due for a big infusion of activity, just by the nature of a growing reluctance among people to leave the house.”

Conversely, this trend will negatively impact the retail side of the business, a trend that’s already playing out on Main Streets and in malls across the country.

But it’s the office sector that has those looking down the road most concerned. Indeed, those we spoke with said it’s possible, and perhaps likely, that companies will learn from this pandemic that there are advantages to having some people working at home and fewer people at the office. And, eventually, this will lead to downsizing and less overall demand for office space.

“The office market, and retail, are the two sectors of real estate that will be most impacted by this,” said Plotkin. “In the case of office, we were seeing some pretty good momentum right before COVID-19 — Springfield usually lags behind, but nationally, the office segment was doing very well. That has come to a complete standstill.

“And the fear amongst my colleagues is that people are starting to realize that this home-work model works for them, and will this replace the need for office space?” he went on. “It remains to be seen how this is going to play out, but that’s a real fear out there; as leases renew, those tenants might be evaluating whether they need the amount of space they occupied. They may do a home/office model that would reduce the amount of space they need.” 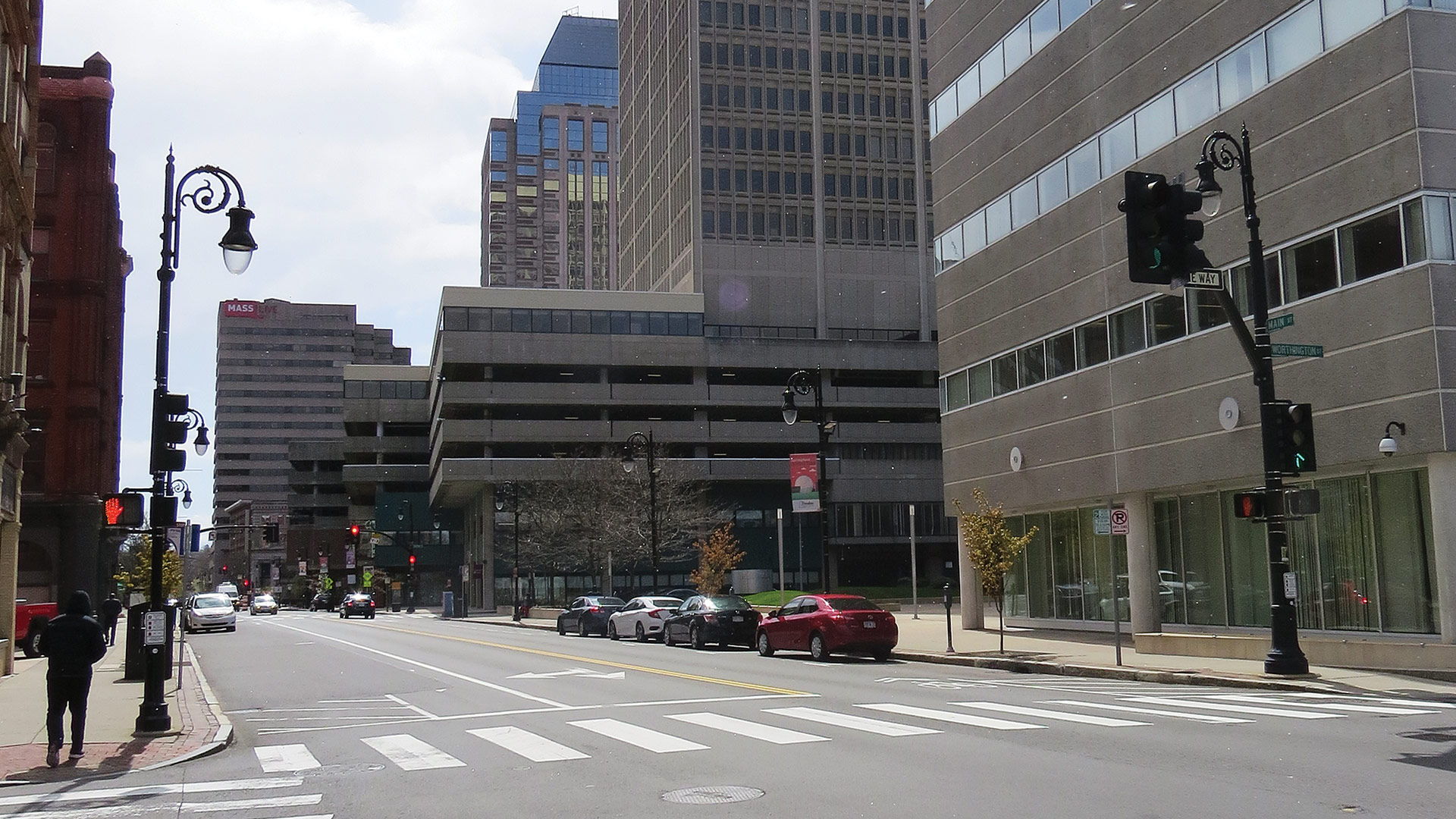 Those we spoke with are certainly hoping that, while businesses get this ‘test run,’ as Plotkin described it, they decide there are advantages to having co-workers in one place.

“That collaborative model is important for innovation,” said Plotkin. “Having people together in close proximity offers the sharing of ideas and collaboration in ways you can’t get with a Zoom meeting.”

Dill agreed. He said companies, and his is one of them, are experimenting with having workers dispersed and working from home, and some of the results are trickling in.

“It’s working pretty well,” he said. “But it’s not the same as having your people together, where they can meet casually, sit down in the same room, and solve a problem.”

Just what will come of the ongoing ‘test run’ of remote working remains to be seen.

What’s clear now, though, is that this pandemic is having a significant impact on the commercial real-estate market locally, and across the country.

The ‘trickle-up’ effect, as well as the trickle-down effect, are real, and as the crisis continues, the toll it is taking on this important sector continues to mount.