Eleven Dead at Holyoke Soldiers’ Home in March, at Least Five Due to COVID-19

Girls Inc. of the Valley to Receive Grant from Baystate Health 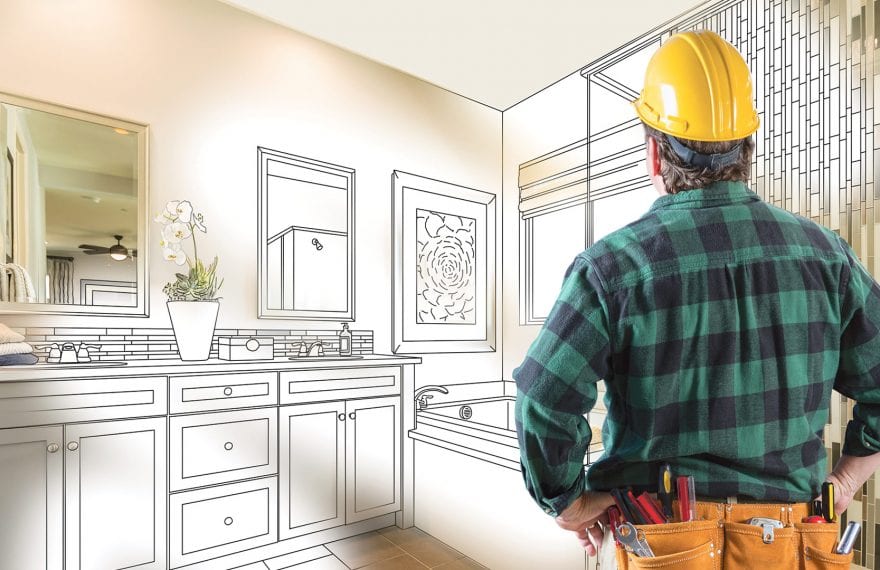 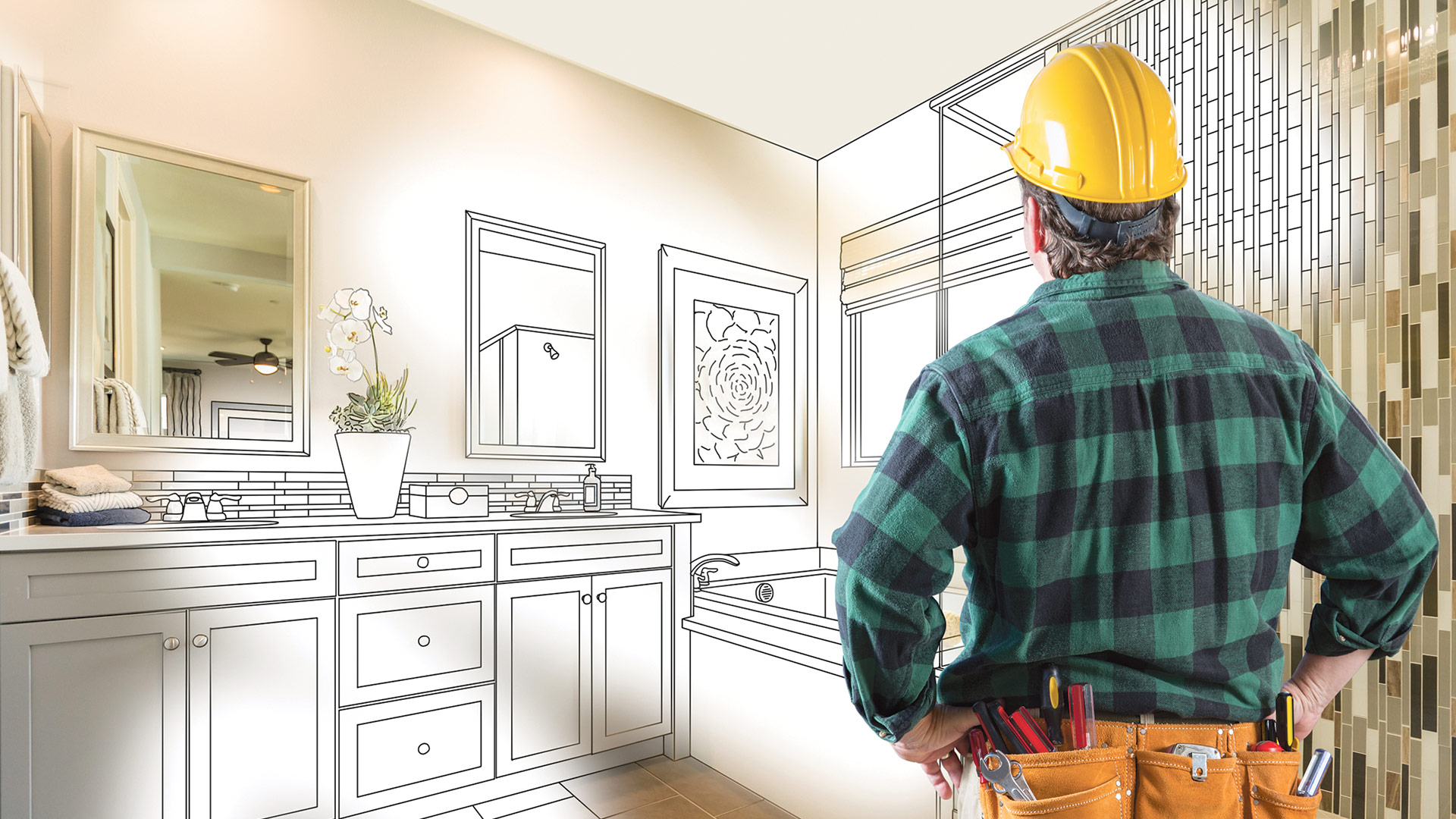 With the economy chugging along, home-improvement businesses report solid activity over the past few years, with the prospect of more to come. Locally, perhaps partly because of a relatively mild December and January, companies logged more customer calls during a time of year when homeowners traditionally want to hibernate. Now, on the cusp of spring, they’re ready to hit the ground running.

If there’s one thing R.J. Chapdelaine is grateful for, it’s changing tastes in home design.

Take, for example, the current trend — one that has been building over the past decade or two — of open floor plans.

“People seem to want to open up the kitchen to family room space, open the kitchen to dining room, and create that open floor plan. That, I think, is what we see the most, taking someone’s compartmentalized house and opening it up,” said Chapdelaine, owner of Joseph Chapdelaine & Sons in East Longmeadow.

“You see the center-hall Colonial with a dining room, living room, and kitchen, and we go in and open up the walls,” he continued. “I say, thank God my grandfather and my father built them the way they did. Now I can go in and open them up. It’s job security. And you watch — someday down the road, it’ll go back.”

Whatever the trends and the homeowner’s personal tastes, the home-improvement industry has been riding a wave for some time now.

According to the Home Improvement Research Institute (HIRI), the market for home-improvement products and materials grew by 6.3% in 2018 after a 7.3% jump in 2017. Breaking it down further, the professional market increased by 9.9% last year, while the consumer market saw a sales increase of 4.7%. That trend is expected to slow slightly over the next three years, but still increase by an annual average of 4.2% through 2022.

“What I’ve seen is a very strong push for kitchens and baths, additions, and remodels,” Chapdelaine said. “That seems to be our strongest portion of the business right now. The new homes have slowed for us considerably, but the kitchen, bath, and addition calls have been very strong, straight through the winter.”

“The new homes have slowed for us considerably, but the kitchen, bath, and addition calls have been very strong, straight through the winter.”

That’s somewhat surprising because normally calls slow through December, January, and February, he added. “Over the years, we’ve come to the conclusion that people really don’t want us in their house around the holidays. But this year, it’s been incredibly strong right through the winter months, which is great. As we gear up for spring, there’s a lot of work on the board. Usually we would be expecting the phone to ring now in anticipation of a good spring start, but it’s been ringing throughout the winter.”

Frank Nataloni, co-owner of Kitchens & Baths by Curio in Springfield, has also seen a busier-than-usual winter, perhaps because the snowfall has not been too onerous.

“We’re a year-round operation, but it really depends on the type of winter we have,” he said. “If we have a mild winter, what happens is demand ends up being spread out, and we see a bit more people through the winter. When the weather is really bad, nobody goes outside. Either way, spring is always the strongest time from a sales standpoint.”

According to the Project and Sentiment Tracking Survey conducted by HIRI toward the end of 2018, which queries adults across the U.S. about their planned home-improvement projects, outdoor living spaces will feature the most activity in the next three months. More than one-quarter of homeowners surveyed indicated they will take on lawn and garden and/or landscaping projects during this time. 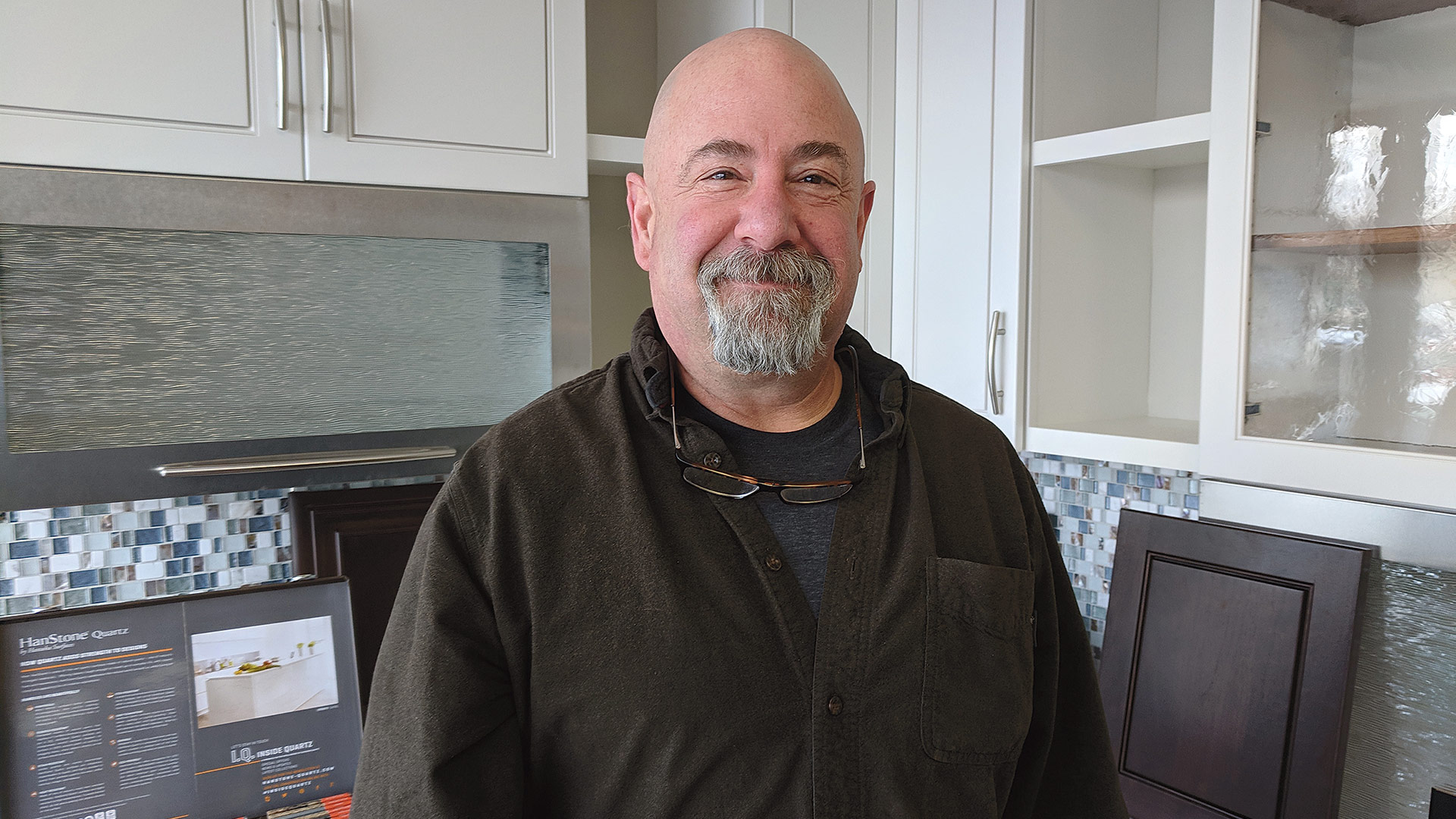 Taking all types of projects into consideration, inside and out, the Northeast and South lead the way, with about two-thirds of homeowners in both regions saying they plan home-improvement projects this spring.

Meanwhile, whether homeowners shoulder the work themselves is relatively dependent on the project type. On average, a little more than half of all projects are of the DIY variety — and of those, many involve outdoor living spaces, with 82.6% of homeowners tackling landscaping projects.

“I have to say, people feel confident, and they’re willing to spend money on their house,” Chapdelaine said. “It seems as though people are upbeat, and we’re reaping the phone calls and the benefits of that consumer confidence.”

HIRI reports that, nationally, the home-improvement products market continues to outperform many other sectors of the economy. At the organization’s 2018 Industry Insights Conference last fall, experts in the sector shared what they felt were some prevailing trends heading into 2019. Among them:

• DIYers are more likely to be Millennials, which may have to do with that generation’s connection to devices. “DIYers spend more than 60 hours per week on TV and digital devices, including computers and smartphones,” Peter Katsingris, senior vice president of insights at Neilsen, told conference attendees, according to Forbes. “The technology and the choices it provides make DIY a realistic option for people.”

• More than one-third of homeowners who completed a home-improvement project in the past year regret not spending more on the project.

• The rental housing market is on the rise. A wave of growth has increased the number and share of rental households in the U.S., especially higher-end rentals in urban areas. This reality could lead to greater interest in portable and free-standing home-improvement products tenants can take with them when they move, as opposed to permanent fixtures.

• With home wellness on the rise, the lighting industry has been coming up with intriguing options. A technology known as circadian rhythm lighting is one rising trend, producing indoor illumination that more closely matches natural light in its warmth and, paired with home automation, can shift through the day with the sun to ease the impact of artificial light on the human body.

• Finally, remodeling activity isn’t slowing down anytime soon, due in part to an aging housing stock. With home prices increasing and new construction harder to find in some areas of the country, people are staying put and remodeling. “With the existing house stock averaging 38 years old, much of the inventory is in need of updating,” Mark Boud, senior vice president and chief economist at Hanley Wood/Metrostudy, told the conference.

That aging stock is an especially relevant reality in Western Mass., but so is another trend boosting the remodeling market: an increasing desire among Baby Boomers to age in place. 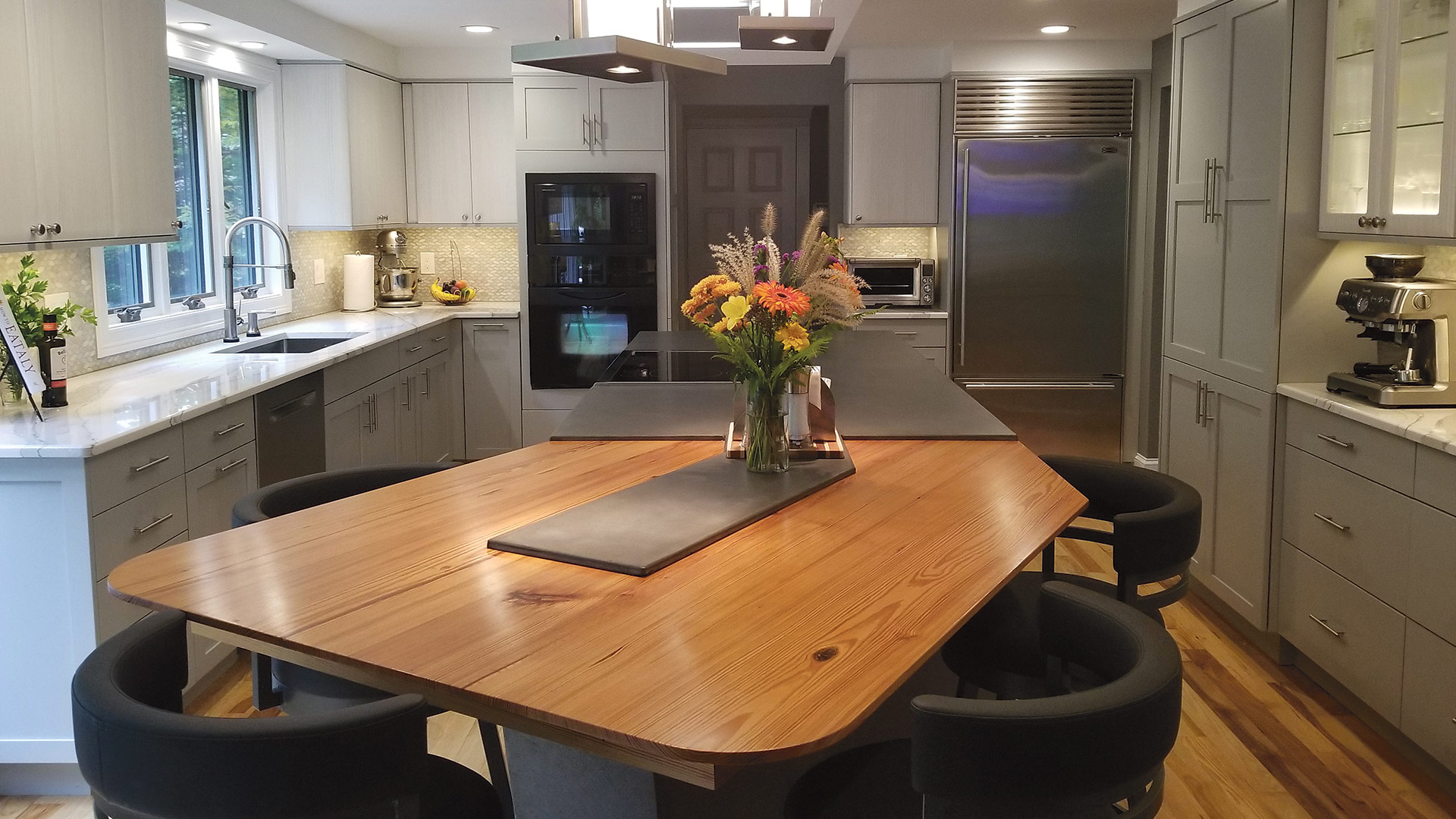 This recent remodeling project by Kitchens by Curio reflects some current trends in kitchens, particularly its color palette dominated by white and grey.

“We’re seeing more aging in place, and we’re seeing that as a reason people are making changes,” said Lori Loughlin, manager of Frank Webb Home in Springfield. “They’re doing what they can to make sure they stay in their homes as long as possible because they feel like it’s a better option.”

In some cases, that means installing mobility and safety equipment, but in others, it means building in-law suites, or even moving to — by either building or remodeling — a smaller house.

“We’re getting phone calls now for people looking to to downsize,” Chapdelaine said. “I think the Baby Boomers are going to be looking for that smaller house and aging in place.”

As for interior styles, those haven’t shifted much over the past couple of years. Painted cabinetry finishes and color palettes dominated by white and grey are still popular in kitchens and bathrooms, Nataloni told BusinessWest. “I just did a process of cherry wood with a black finish rubbed off, and the cherry comes through the black. It’s spectacular, actually.”

Styles change, he noted, but they don’t change abruptly. “White is very popular, grey is popular, but we are starting to see other colors, hints of yellow and green, coming in. I’ll be doing a yellow kitchen — not school-bus yellow, a very pale yellow, but a very warm color.”

“We’re seeing more aging in place, and we’re seeing that as a reason people are making changes. They’re doing what they can to make sure they stay in their homes as long as possible because they feel like it’s a better option.”

Chapdelaine reported similar, gradual movement toward color, but mainly pastels and muted colors, not too much that would be characterized as bold. “We’re still seeing a lot of white cabinetry and floors stained a number of different colors. With surfaces, we’re still running strong in quartz — some granites, but mainly quartz.”

The most important trend, of course, is that the home-improvement business as a whole remains strong.

“We’re seeing everything from full bathroom jobs to kitchens with the walls removed, right up to additions, which are ranging from family rooms to master suites,” he said. “We’re seeing more whole-house updates — painting, hardwood floors, that kind of work — and we’re also seeing whole-house remodels, which is very similar to building a house. You’re gutting the house down to the bare studs, going through and doing a new bathroom, new kitchen, new flooring, new drywall, which is kind of nice.”

He expects spring to bring its usual rush of customer inquiries as the weather continues to improve, but said people looking to get into the queue for the spring should really be calling in February and March.

Nataloni agrees, and says he appreciates the fact that, with the economy performing fairly well, homeowners are investing more money in their living space, whether they plan to stay there for a long time or improve the house’s dated look in preparation to sell it.

“We have a lot of older housing stock around here,” he said. “Wherever you go, you see someone working on their house.”