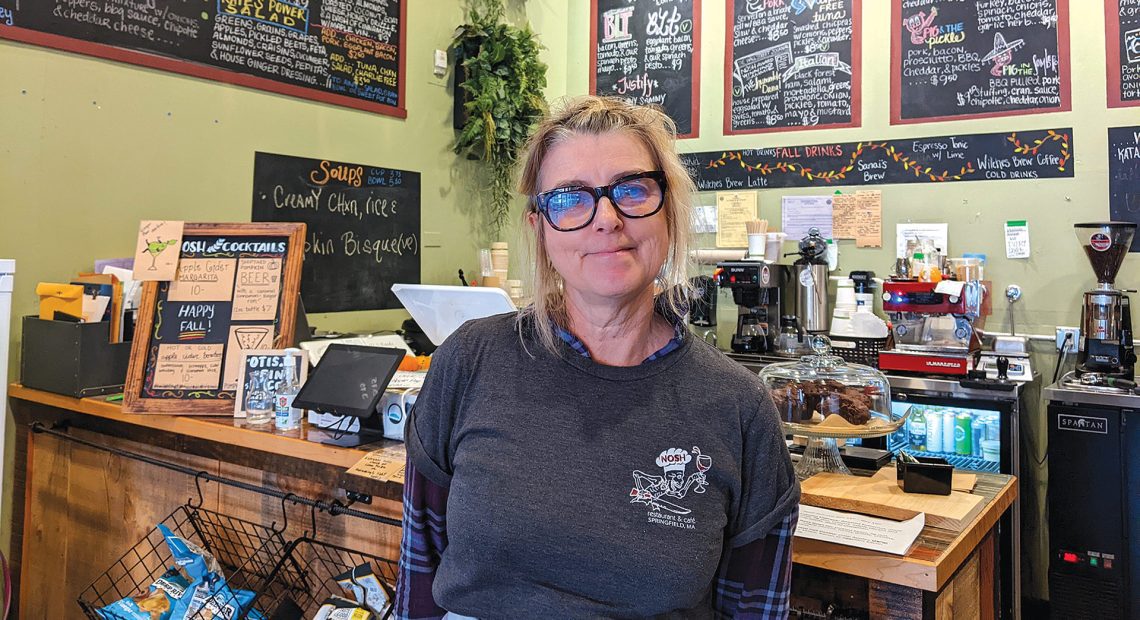 Dishing Out Something Different 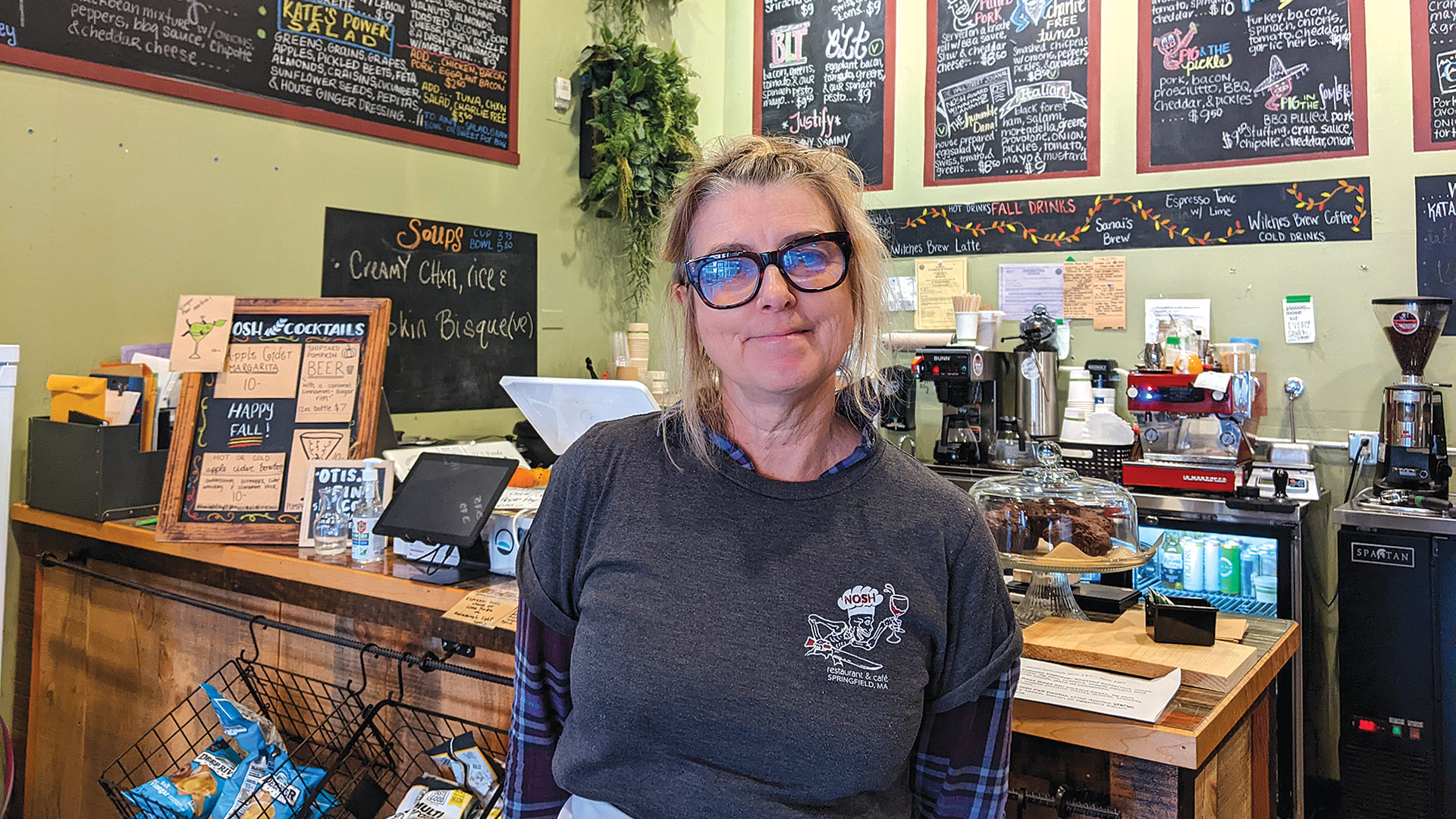 Growing up in Monson, with a father who worked in auto-body services, a young Teri Skinner occasionally visited downtown Springfield with her mother to pick up parts or paint, and they’d make time to stop by Johnson’s Bookstore and other bustling shops.

“I remember loving downtown Springfield,” she said. “Coming from a small town like Monson, there were so many things to do here.”

In the early days of running her restaurant, Nosh, in the Shops at Marketplace — just a few steps from the former Johnson’s site — she recalls the streets downtown being much quieter than they were in her childhood.

Then, a few years ago, she noticed a change.

“It didn’t happen overnight, but leaving here, I started thinking, ‘wow, there are people downtown, just walking around.’ And it wasn’t just MGM, which is great asset, but a lot of community people who wanted to see Springfield become viable. And I just enjoy being down here — I love everything about it.”

Nosh, which just celebrated its sixth anniversary on Black Friday, wasn’t something Skinner planned to operate long-term when she started selling breads and pastries at Marketplace during the summer of 2016.

At the time, she was running a small catering operation out of her home, following a stint at a catering company in Worcester that had burned her out with 70- to 80-hour work weeks.

“What caught my eye was this big wall, and I could picture a menu on it. And I was like, ‘yeah, I can do something with this.’ I had no idea what the menu was going to be; I just knew I could pull it off.”

The owners of Simply Serendipity, a clothing boutique at the Shops, approached Skinner about selling her baked goods at a farmers market on Market Street, the alley that runs behind Main Street between Harrison Avenue and Bruce Landon Way.

“As the summer progressed, people were saying there’s not enough places to eat downtown, so I started bringing sandwiches and salads. Then, as the weather cooled off, I was bringing soups. It was basically a pop-up restaurant every week, with a little table and a tent outside. The BID provided us with small café tables, so people could actually sit out here and eat, which was nice because it’s such a cool space back here.”

She thought that would be the end of that enterprise, but as the cool weather approached, a small space opened up in the Shops, and one of the property owners approached Skinner about it. “She opened up this door, and it was a closet. But what caught my eye was this big wall, and I could picture a menu on it. And I was like, ‘yeah, I can do something with this.’ I had no idea what the menu was going to be; I just knew I could pull it off.”

Two weeks later, Nosh was born, with little equipment other than a commercial refrigerator and a panini press. “That’s how I built my menu, with those two items. I was making soups and sandwiches for the holidays. And during the holiday market, it was successful enough that I said, ‘all right, maybe we can do something with this.’ So we stayed.”

Six years later, Skinner is glad she did, not only growing and expanding her establishment, but getting ready to open up a second location in Gasoline Alley on Albany Street (more on that later).

The expansion happened in 2018, when a pair of divided spaces became available, and Skinner contacted the property owner about taking over both sides.

“My small staff and I worked during the day, then worked at night tearing down walls and stuff. We opened a week before MGM opened,” she said. “It’s been great. The business continues to grow, even though we are so hidden back here. I still get people who come in and say, ‘I’ve lived in Springfield all my life, and I didn’t know this space existed, this whole street.’”

The larger space gave Skinner a chance to expand her culinary offerings, which still center on sandwiches, salads, soups, and baked goods, but a much broader variety of each.

“There were some good original eateries down here, like Nadim’s and the Fort, but not a lot of variety, or something that was our niche at that point,” she said, before recalling her stint working for a restaurant at the veterinary school at Tufts University when her former catering-company employer got the contract there.

“I’ve gotten some pushback on things; I got a one-star review because somebody didn’t like what was written outside. But I don’t want to put on a pretension that these aren’t things I hold dear to my heart. Sometimes, something triggers me, and it’s like, enough is enough.”

“A lot of first-year students would come in who were vegetarians or vegans, and that’s where I honed in on that aspect of the cuisine I present. We also had large-animal doctors who were carnivores, so I had to cook everything. And I felt a restaurant shouldn’t be limited to one cuisine, but should be able to serve all different palates. That’s what my vision was for this space.”

The restaurant has expanded over the years to Saturdays and a couple of evenings each week, but weekday traffic, especially foot traffic from the downtown office towers and surrounding businesses, have long been her bread and butter, as well as people visiting the MassMutual Center for events.

The pandemic posed challenges to all restaurants, but Skinner’s sister-in-law designed an online ordering platform, and Nosh switched to a delivery model, with the small staff doing all the deliveries themselves rather than use an entity like DoorDash. It also partnered with an intern from Baystate Health on a hospital-worker program, whereby people could donate $10 toward a meal for a local healthcare provider, which Nosh matched.

As restaurants reopened, patrons were once again able to enjoy Nosh’s decidedly funky interior design, bedecked in local art, antiques purchased by Skinner’s son and girlfriend, tables built by her husband, and the handiwork of a local woodworker who created countertops and the Nosh sign from reclaimed wood.

“I don’t like buying new things; I think we have enough abundance of things we can reuse and recycle,” she said. “So we try to be as mindful as we can in this industry about what we’re using for products and how they’re packaged and how they leave our establishment and what you can do with them afterward.”

The other dominant visual feature are the colorful, descriptive menu boards and the chalkboard paint covered with the staff’s thoughts — some amusing, some serious, especially around feminist values.

“I wouldn’t want a restaurant that looked like every other restaurant,” Skinner said. “I want my personality in here, and I think my personality is in here, as well as many of the people who work for me. It’s all coming through. We’re a team, so I want them to share their ideas.”

Outside Nosh, facing the alley, is a board that has been used for deadly serious messaging, from the transcript of the 911 call from the Uvalde, Texas elementary school to an angry quote from U.S. Rep. Jim McGovern in the wake of Roe v. Wade being overturned.

“These are frustrating times we live in, and I just don’t think we can be quiet about it any longer,” she told BusinessWest. “I’ve gotten some pushback on things; I got a one-star review because somebody didn’t like what was written outside. But I don’t want to put on a pretension that these aren’t things I hold dear to my heart. Sometimes, something triggers me, and it’s like, enough is enough. Obviously, when Roe overturned, that was just devastating.”

Inside the eatery are other messages promoting acceptance of all individuals. “All people, no matter what your beliefs are, should be accepted, no matter who you are and who you love,” she said, adding that the bathroom is dotted with still more messages. “We’ve had people erase them. Then we just go back and write it again.”

A new commercial kitchen is being built for Nosh, which will offer a similar slate of offerings as the downtown location, starting off with breakfast and lunch menus. In the evening, Skinner plans to bring in guest chefs to cook dinner and show off their talents.

“It will have a market feel, with a lot of businesses in there, and we’ll take new businesses just starting off and incubate them, get them going,” she said. “The property owner here did the same for me when I opened up my closet — gave me good rent and was super supportive. Someone might have a great idea or a product they want to sell, but can’t afford a brick-and-mortar place yet. So we’re trying to create that sort of space there.”

And perhaps help someone else who has always loved Springfield find long-term success in the City of Homes. 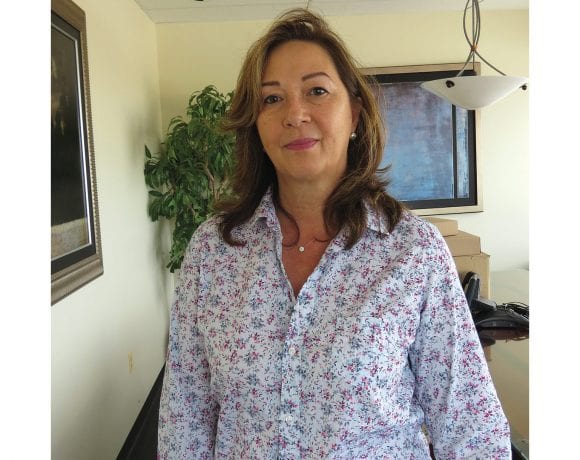 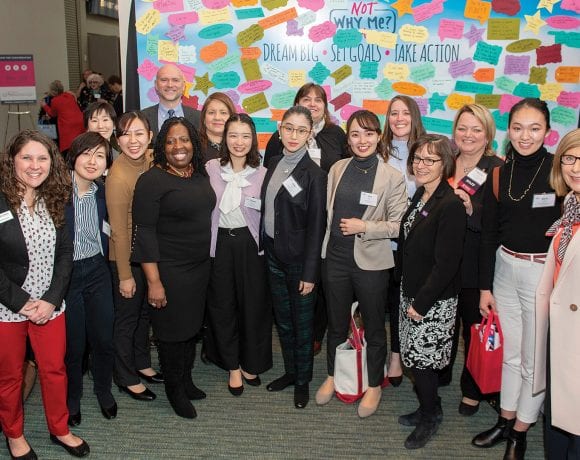