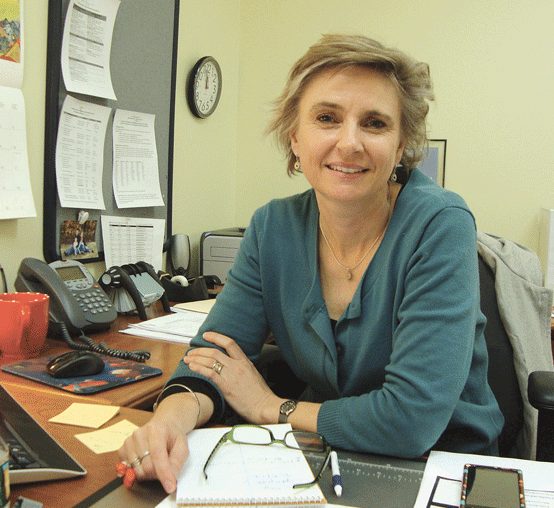 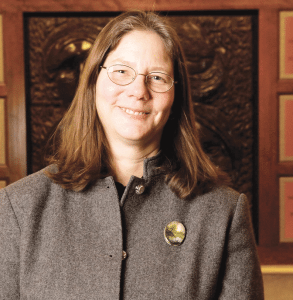 Dr. Cynthia Jacelon says rehospitalization is a problem these days because hospitals are under increasing pressure to discharge patients quickly.

Avoidable rehospitalization, when a patient returns to acute care within 30 days of having been released, has always been an issue facing those professionals on the front lines of quality patient care.
Dr. Cynthia Jacelon is the director of the UMass Amherst School of Nursing’s Ph.D. program, as well as the scholar-in-residence at Jewish Geriatric Services in Longmeadow. Her particular field of research in health care centers on dignity of care in older adults. She told BusinessWest that the issue of rehospitalization has received renewed scrutiny in recent years due to federal health care reform.
Specifically, it is the Patient Protection and Affordable Care Act, which has numerous provisions. But one which hits the bottom line is a change in insurance reimbursements for patients who have been subject to what is called ‘avoidable readmission.’
“Rehospitalization has become a problem, in part, because hospitals are squeezed to discharge people at the moment they are ready,” Jacelon said. “Every time a hospital discharges someone at the first second that they are able to be in a different care setting, they are taking a risk that they misjudged that second. If they judge the moment correctly, they get paid for the hospital stay, and it’s all good. But if they misjudge the second, they now face financial penalties.”
However, a partnership comprised of employers, education providers, workforce-development leaders, and philanthropists, which has been in existence since 2006, is in the beginning stages of a program designed to target that concern. Among the many partners in the Healthcare Workforce Partnership of Western Mass. is the Regional Employment Board of Hampden County, where Kelly Aiken is the director of Healthcare Initiatives. She said this partnership is “invested in the future of nursing.”
As she explained, “the whole premise of the project itself is that partners have come together to solve a problem that no one organization can solve on their own. Care transitions are such a critical component of achieving all the industry’s goals around improving access, increasing quality, and reducing costs.”
Since September of last year, the program known as the Care Transitions Education Project (CTEP) has been in the first of three stages in three years to develop what those involved say is a means to directly address the issue of rehospitalization, from both a financial perspective and also that of providing the best in patient care.
And while one primary goal is to reduce financial strain due to rehospitalization, and both Jacelon and Aiken stressed that this is indeed an outcome, they said the implications for health care are nothing short of groundbreaking.
“Yes, it is a strategy to reduce readmission rates,” Aiken said. “But the genesis of our partnership has been about collaboration. It has been a perfect match for trying to advance the type of collaboration that is required amongst these settings, in education and in health care.” In education, the stakeholders are American International College, Elms College, UMass Amherst, Westfield State University, and Greenfield, Holyoke, and Springfield Technical community colleges.
Finally, the workforce-development group includes the Regional Employment Board of Hampden County and its programs.
The HWPWM has many broad initiatives under its banner, Aiken said, but one of crucial importance is the CTEP. According to the State Action on Avoidable Rehospitalizations Initiative, avoidable readmission rates for patients returning into acute care are as high as 28% of all hospitalizations.
Of course, that rate has long been addressed by a health care industry seeking to offer the best in care to its clients, but the insurance reform puts readmission into high relief.
“Readmissions have long been an issue,” Aiken explained, “but never one that has been tied to reimbursement rates. Now, what is coming down the line … if a patient is going from one setting to another, and it is deemed avoidable, there are going to be changes to the reimbursement rates for Medicaid and Medicare patients. That insurance will no longer reimburse facilities if there is an avoidable readmission that takes place within 30 days of discharge.”
The CTEP timeline approaches its goals in three parts. Currently, the project is in phase one — creation of curriculum for nursing students and incumbent professionals. Subsequent stages are pilot projects to put that information into the field, and the final stage of the process is to disseminate the curriculum, findings, and information statewide. Aiken explained the steps.
“Right now, we’re developing the curriculum which will be packaged as training for our target audience — staff nurses, nurse managers, and nursing students — those health care professionals who are the point of care,” she explained.
“You take that big-picture environment where health care reform is changing,” she continued, “and then you take it down further to an individual organizational level where they understand they are not going to be reimbursed if they don’t change their process and improve their care. And then you take it down even to the unit level, where you say, ‘my workforce needs to understand how to improve care transitions so that ultimately the quality of patient care improves, and I’m going to be reimbursed in an adequate manner for the services that I’ve provided.’”
The second phase of CTEP involves pilot testing and evaluation of the curriculum, rigorously evaluated. “We will be determining if the curriculum itself can help us achieve the learning objectives that we’ve set forth,” Aiken said.
The third phase is about dissemination statewide. Aiken said the lead grantee for CTEP is the Mass. Senior Care Foundation, which is associated with the Mass. Senior Care Assoc., the trade association for long-term-care facilities.
“The fact of the matter is that we’re operating here regionally because of our history of collaboration,” she explained. “But we are working directly with a state-level organization because we believe that what we can develop here has implications across the state.”

Collaborative Effort
The curriculum is designed not for the purpose of reinvention of nursing standards, but rather to offer a new perspective on collaboration between acute and long-term care.
Jacelon said this is nothing short of revolutionary.
“Across agencies, from acute care and long-term care, there can be a lack of what I will call respect,” she said. “For instance, it’s easy for me, as a nursing-home nurse, to say, ‘well, that acute-care nurse didn’t do their job because this patient came here clearly not ready to be discharged from the hospital.’ And it’s easy for the acute-care nurse to say, ‘they were OK when they left here, so the nursing-home nurse must not have known what they were doing.’
“So one of the goals of this CTEP curriculum is to build teams of nurses across settings,” she continued, “so the nursing-home nurse can say, ‘oh my goodness, something bad must have happened on the way here, because I know Joan at the hospital would not have sent me this patient in this condition.’ And for the hospital nurse to be able to say, ‘I know those people at the nursing home do a really good job, so it’s not their care that caused this person to come back; it’s something about the patient’s condition.’”
Summing up that hypothetical scenario, she added, “if we can build that respect, then you have much better communication across the changes of settings. And once you have better communication, then you have better transfers.”

Dollars and Sense
The financial incentives behind CTEP lie first and foremost with the acute-care facilities. But Jacelon and Aiken stressed that dollars and cents are important considerations for their organizations as well. Both stressed that readmission is first and foremost a problem under the purview of quality patient care, but there are fiscal ramifications for their organizations.
“The business point comes in for us because that acute-care facility is highly invested in not having their patients come back within 30 days,” Jacelon said, “and they’re going to be shopping, if you will, for the most effective post-acute-care setting for that patient.
“If the Jewish Nursing Home’s re-hospitalization rate is less than 10%, which I’m pleased to say ours is,” she added, “and the XYZ nursing home elsewhere is 25%, where are you going to send your patients? Therein lies the incentive for us; it makes us more desirable.”
Aiken said that, from the very start of the CTEP’s existence, the REB has seen this program as a means to address new-worker and incumbent-worker training and education needs.
“One, we have staff that our employers say are not prepared to face the future of health care,” she said, “and to help them in the success of their evolving business model. So in that way, it’s an incumbent-worker training need.
“From a new-worker perspective,” she continued, “we want to make sure that we are educating our new nurses so that they are prepared to take the jobs in the region that are here. And frankly, in the work that we had been doing before, we identified that new graduates weren’t interested in taking jobs outside the hospital setting. And in some cases, the employers weren’t prepared to take new graduates.
“There’s been this model for years that your first job is in the hospital, then you get some training, and then you can go into different care settings,” she added. “Well, it’s not necessarily the way it’s going to work in the future. Fewer and fewer jobs are going to be in the hospitals, so nurses have to be prepared and willing and excited to take the jobs that are going to exist in all these other care settings.”

Goal Standard
Because CTEP is funded through a Partners Investing in Nursing’s Future (PIN) grant, a collaborative effort of the Robert Wood Johnson Foundation and the Northwest Health Foundation, both Aiken and Jacelon are eager to see the regional impact of this curriculum and its outcomes. When asked about the national implications of CTEP, Aiken smiled.
“We would love to say that we can ultimately head in that direction, but I think that we start small and see where we can go,” she explained. “But PIN is involved in 37 states. That’s an incredible network that is in the future on our stage for dissemination.
“There is a great expectations of where we could go,” she added, “but first we have to get it right. And we feel that Western Mass. is a good place to test the waters.”
As an educator who has been actively building curricula for years, Jacelon said this is a fundamental building block in how nursing will be taught. “CTEP will be part of the curriculum of nursing school,” she explained, “and it’s designed for practicing nurses and for student nurses. It’s going to fill a hole in the curriculum, in that, to date, not a lot has been taught about these issues.”
Time will tell how CTEP will help to reduce rehospitalization rates, but like their other partner organizations, Aiken and Jacelon are both proud and confident in the partnership designing the curriculum and its subsequent programs.
“But it’s very hard to say whether a project like this will globally reduce rehospitalization,” Jacelon added. “Although, if the rates in the area decline over the next three years, it’s going to be because someone has done some intervention. That is our goal.”