A Colorful Approach to Business

Clark Paint & Varnish Endures In the Shadow of the Big Boxes 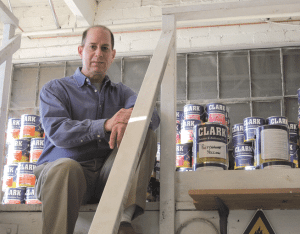 Andy Raker attributes his family business’s success to a focus on the basics and doing what the big-box stores can’t.

In the 1960s, Andy Raker’s mother took a request to have a specific color of paint mixed for the set of the former StageWest theater (the predecessor to CityStage) to match the famous violet eyes of the star of the next show — actor Robert Goulet.
Raker, now the president of the Clark Paint & Varnish Company — the West Springfield-based family business that his grandmother and mother were running at the time — told BusinessWest that while it was one of the more unique requests over the past 67 years, on any given day it’s not unusual to see customers hauling doors or pieces of dining room furniture into the Union Street store to find a matching stain or paint color.
And while matching paints seems to be all the rage in many home décor outlets, Raker calls color matching an art; a combination of computer-assisted color analysis and ‘eyeballing,” the term he uses to describe use of the naked eye to compare colors in different light settings.
How Raker came to be a practitioner of this art is an intriguing story of entrepreneurship, creativity, and, most importantly, survival of this rather small-box enterprise in a retail world increasingly dominated by big boxes.
Indeed, having just finished high school and starting his first semester at American International College in 1978, Raker found himself, and his family business, in a serious situation.
Backing up a bit, he said that after his grandfather, Milford Raker, who had purchased the business from original owner Fred Clark, passed away unexpectedly in 1963, his grandmother, Ruth, and mother, Marcia, were thrust into the roles of owner and operator, and with no real experience to handle them.
For 15 years, they and the existing staff managed the operation, but when the slow, steady exodus of that staff left the two women alone to run the store, Andy was forced to put school aside and take a leadership position in the family business.
“I had worked at the store in the summers but I never learned how to make paint, and I remember when the last guy (employee) to leave handed me the keys,” recalled Raker.
Once management was thrust upon him, he said it was refreshing on one hand, realizing that he was going to be able take the company in a direction that he thought was going to be positive. “But it was scary; it definitely was with mixed emotions,” he recalled. “It was either sink or swim.”
A loyal customer base of mostly retail and apartment-building owners kept the company alive as the young Raker spent the next two years learning the paint and stain trade and took advantage of new technology as it came, asking for help from paint chemists, and especially raw chemical salesmen.
“All these raw material people will supply you with information to help sell their materials,” explained Raker. “And back then it was pretty competitive and everybody had chemists on staff so when they wanted to sell me their titanium dioxide (white pigment), I’d say, ‘well, I need some help formulating it.’”
And as he continued to learn on the job, the formulas for Clark paint brand continued to improve. Experimenting with different recipes in batches with a blender, he produced small samples, took some chemistry classes, and, through trial and error, learned how to make quality paint, just like his grandfather, who’d never had the chance to teach him.
Raker would create starting formulations with various colors that had better flow and level, would cover better, save money, and have lower VOCs (volatile organic compounds). And as everything in the paint industry went ‘greener,’ so did Clark Paint.
For this and its focus on entrepreneurship, BusinessWest talked at length with a business owner who likes to mix things up — in more ways than one — and has the bases covered in an extremely competitive sector.

Brush Strokes
Clark Paint & Varnish’s success over the past two decades stems from a mixture of Raker’s late-teen ‘take charge’ attitude in the face of multiple adversities and his ability to learn on the job. While friends were experiencing the independence and adventure of college, Raker was experiencing a different type of independence, one that was more survival at first, than anything else.
And when asked how he’s scripted this survival story, he said it’s been through a focus on the basics, and doing things some of the discount giants can’t.
With the arrival of those big boxes, and especially the Home Depot in the nearby Riverdale Shops in the early 1990s, most would have thought that a small, family owned paint business like Clark would have taken a good shellacking, and a few stores in the area did — including West Springfield Hardware — which eventually ceased operations.
Clark’s retail paint business took a sizeable hit — roughly 30% by Raker’s estimate. While this was a large setback, a solid industrial customer base carried the company through the next couple of years as Raker made the decision to adjust his sales focus and target more commercial business, a move that helped redefine the company for good.
Attrition of some of Clark’s competition due to Home Depot’s opening presented the opportunity for Raker to add national brands such as Pratt and Lambert and Benjamin Moore to his own, well-respected Clark label, and with the addition of an outside sales person to help secure new commercial business, Clark Paint now had more clout to compete for all markets, he said.
“That move broadened our line even more,” he said, “and brought more people into the store because those brands have a lot of dedicated customers in this area.”
And new retail customers in turn created more need for that aforementioned expertise in  color matching.
“Everybody has computers to match, but it’s only a starting point; it never matches perfectly,” Raker said, adding that a trained eye is still key. “And we’ll dry the paint, because wet paint is different than dry, and actually take the samples out in the daylight as opposed to just florescent lights because it’s not a true rendering of the color.”
But with stain and varnish matching, there is no computer to do that analysis. “It’s also part of our reputation and it’s all experience and by eye,” added Raker.  “A lot of other stores don’t have the capability, the expertise, or even the pigments to make certain stains.”
Clark has a whole line of dye stains and a line of lacquer, called M. L. Campbell for cabinetmakers, furniture, and display manufacturers. The line, Raker explained, is more for industrial use on harder woods and offers far more depth of color, than the popular Minwax brand found in many stores.
Another key to the company’s success has been its ability to adjust to changes within the industry, and especially a strong focus on ‘green’ — not the color, but the movement toward more environmentally friendly products and processes.
Before the younger Raker took over, the advent of polyurethane, a plastic-based compound in the late 60s and 70s changed the landscape of varnish. Now mildew resistance is a controversial buzzword in the paint industry, and the cheap, readily available, but harmful lead — used as a white pigment and to prevent mildew — has been replaced by titanium dioxide and other environmentally safe additives, a result of federal VOC laws that also eliminated solvents in paint. As Raker has ridden the evolving technology wave, he has seen more genuine customer concern for health and environment.
“Everybody is looking for a more sterile, cleaner environment, and technology is catching up fast, but it wasn’t like that at first,” Raker explained to BusinessWest.  “Originally when the first paints came out that had to be ‘green,’ they weren’t quite as good, but now the technology is there.”
While those same raw chemical vendors were selling the same formulas to his competitors, Raker told BusinessWest that because Clark is a small manufacturer of paint, he could learn to make the greener formulas quickly, and keep his cost per can or container down due to a lack of shipping and distribution costs and third party middle men. “From the raw materials to out the door, we’re able to offer a better product at less money.”

Satin Finish
Raker hasn’t been called upon to create a paint to match a Hollywood star’s eyes in recent decades, but he admits that there have been intriguing challenges with that aspect of his work.
The biggest challenges, though, have been stepping in and then stepping up to take this family business to places that might not have been envisioned in 1978, or later, when the competitive playing field changed dramatically.
This is an inspiring story of entrepreneurship and perseverance. What will happen in the coming chapters isn’t known yet, but one thing is certain — they will be colorful, and in every way imaginable.