Carla Cosenzi says sales have been on the rise for several years at TommyCar Auto Group, and she expects this trend to continue at its dealerships.

Initial national projections for 2017 called for the recent rise in auto sales to level off and then perhaps slow down. But those forecasts have been adjusted recently. Indeed, the experts say a host of favorable factors, from low gas prices to a stable economy to the advanced age of many cars on the road, will continue to fuel increases in sales volume.

John Kupec III has been in the automobile-sales industry for 40 years. But he has never seen trade-ins with as many miles as the ones being brought to Gale Toyota in Enfield today.

Indeed, a poll conducted last month by market research company IHS Markit shows the average age of light vehicles on the road is 11.5 years, and the trend Kupec observed is mirrored at other dealerships.

“This week alone, I saw trade-ins with 160,000 miles, 180,000 miles, and 240,000 miles — vehicles last longer than they used to, but people have taken it to the extreme,” said John Lewis, general manager at Chrysler Jeep Dodge Ram and Bertera Fiat and Collision Center in West Springfield, as he spoke about reasons that led so many people to keep their vehicles for a decade or more. 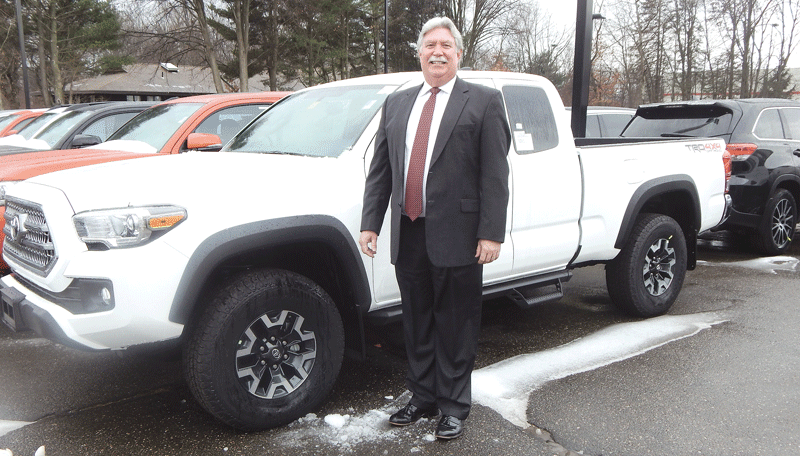 John Kupec is optimistic about the year ahead, and says Gale Toyota of Enfield hopes to increase sales by 10% to 15%.

The practice began in 2008 when the economy crashed. Consumer confidence plummeted, 401(k) plans lost their value, and people worried about job security and began to realize they could drive their vehicles much longer than they had believed possible without incurring a lot of repairs.

“Today alone, we took in a 2001 with 160,000 miles and a 2005 with 155,000 miles,” said Craig Dodenstein, sales manager for Toyota of Greenfield, who noted that people usually upgrade to a new vehicle when the cost of repairs becomes prohibitive.

Sales began to rise a few years ago in line with a renewed confidence in the economy that has slowly taken root. But last fall, the National Automobile Dealers Assoc. predicted 2017 would be the year in which sales would reach their peak and begin to slow down. That projection was changed, however; now, sales of new vehicles in the U.S. are expected to remain above 17 million for the third straight year in a row, and even rise slightly toward the second half of the year.

Aging vehicles still on the road have resulted in pent-up demand, and that factor, coupled with new models, aggressive manufacturer incentives, low interest rates, reasonable gas prices, and an upswing in the economy, are fueling optimism at local dealerships for the coming year.

“Last month, our sales were up 10% over January of last year, and we expect a 20% increase in 2017,” Lewis said, attributing the number not only to the company’s reputation and the service it offers, but the fact that Subaru sales have climbed and a new $5 million Chrysler Jeep Dodge dealership is under construction, which hindered sales last year when they started working from trailers.

Fathers & Sons in West Springfield also has a new dealership, an $18 million facility that is home to Audi and Volkswagen franchises.

“We want to grow, plan to grow, and have the tools in our arsenal to do it,” said Sales Manager Ethan Prentiss. “In December, Volkswagen had the best month in company history, and this year we expect a 10% to 12% increase in Volkswagen and Audi sales, and an 8% to 10% increase in Volvo sales,” he said, referring to the company’s other dealership on Memorial Avenue, which houses the largest dedicated Volvo dealership in the country in terms of square footage. 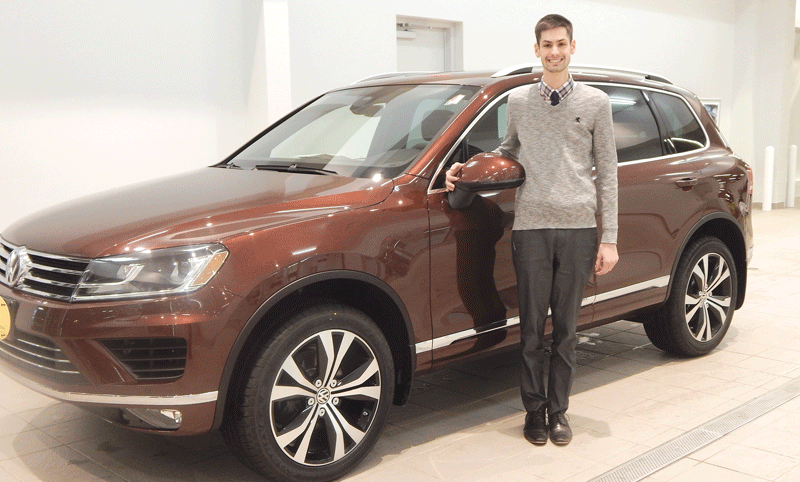 Ethan Prentiss says the demand for SUVs and crossovers such as the new Volkswagen Touareg continue to rise at Fathers & Sons Volkswagen.

Incentives are also boosting sales, and Kupec said Toyota’s are higher than they have been in decades. “The manufacturer is offering 0% interest on some models, which they have never done before; hefty rebates of $2,000 to $3,000; and bonus cash on leases,” he said. “We’re off to a great start and hope to have a 10 to 15% increase this year in sales.”

Bill Peffer concurred. “It’s a very exciting industry to be in, and our outlook for 2017 is very, very positive,” said the president and chief operating officer of Balise Motor Sales, which has 24 stores in three states. “The market is very strong, and any volatility has been offset by manufacturer incentives. There are tons of new choices for customers — it’s a very good time to buy a car, truck, or SUV.”

For this issue and its focus on auto sales, BusinessWest looks at the current landscape within the industry and what the road ahead might bring.

Getting into High Gear

Last June, Volkswagen agreed to buy back its 2.0L diesel vehicles after a lawsuit that proved it had used emissions-system-defeating software. The VW Group also agreed to pay owners $5,100 to $10,000 in additional compensation on top of a fix or buyback of their car.

The negative press that ensued made sales challenging for a period of time, but buybacks began last October and accounted for a quarter of the Volkswagen sales at Fathers & Sons in December.

“These people would normally not be in the market for a new car, and the projection is that we will be able to retain 25% of them; many of our customers love the way their Volkswagens drive and handle,” Prentiss said, explaining that this situation, coupled with the new dealership and a lineup of exciting new products, is not the only reason for the projected increase in sales.

“We are now a negotiation-free dealership, which is what customers want,” he continued. “Buying a vehicle here has become all about the experience. Our salespeople are non-commissioned, and customers can find what they are looking for and complete the purchase within two hours.

“We give them our best price up front and make it fun to buy a car,” he continued, adding that Volvo sales are also up, as the manufacturer broke records last year due to the launch of a new image and the release of new products.

Toyota of Greenfield is another dealership that has undergone change. It moved into a new, $7 million dealership last winter and held a grand opening last May, so 2016 was a year of transition as they were able to move out of the trailers they worked in during 2015 while construction was underway.

“We’re looking for a 5% to 10% increase in sales this year, and if January was any indication, we are headed in the right direction,” said Dodenstein, adding that January sales had almost tripled over last year’s numbers by the third week of the month.

Although the new dealership certainly makes a difference, manufacturer incentives and new products add to the enticements. The new electric Prius Prime is a leader in its class; it gets 133 miles per gallon, beat a preliminary 22-mile electric volt range estimate with 25 miles, and gets 54 mpg in hybrid mode.

“Hyundai gives customers a lot of value for their dollar, including technology, safety, and the aggressive pricing people are looking for,” Cosenzi explained, noting that consumers are excited about the fact that new technology is standard in many brands of entry-level models and ranges from adaptive cruise control to lane assist, collision warning, and backup cameras.

TommyCar is expecting another excellent year, and the sales of the new Volkswagen Golf All Trac station wagon, which has all-wheel drive, accelerated right after it was released. In addition, SUVs and crossovers are becoming increasingly popular, such as the 2017 seven- passenger Nissan Rogue and Volkswagen Tiguan.

“People want the space, comfort, and luxury they provide. They are more expensive than compact cars, but with interest rates and gas at all-time lows. they’re affordable,” Cosenzi noted.

Other local dealers agree that the demand for trucks, crossover vehicles, and SUVs is growing. They point to the fact that unemployment rates are low, people use trucks to do business, and buyers of all ages want to be able to travel in the winter.

“The weather in New England is unpredictable, and people want mobility whether they are driving to the ski slope or have the kids in their vehicle during a snowstorm,” Peffer said, adding that today’s crossovers and SUVs offer that versatility.

He noted the trend has changed over the past few decades. “Station wagons were popular from the ’40s through the ’70s. But when Chrysler came out with a minivan in the ’80s, the evolution of SUVs began, and so did the way people chose to be mobile,” he told BusinessWest, noting that crossovers and SUVs are affordable, offer more utility than mid-sized cars, and get good gas mileage.

Prentiss said Fathers & Sons sells seven-seat vehicles as quickly as they get them, and Audi’s Q7 and Volvo’s XC90 SUV models are popular because they offer utility plus plenty of cargo space. In addition, Volkswagen’s Tiguan and Golf All Trac have made the brand competitive with Honda and Toyota.

Local dealers say leasing has increased and accounts for a good portion of their new-car transactions.

“Leasing allows people to move into cars with low payments without the hassle of long-term maintenance; they can lease them to drive what they want and turn in the car before the warranty is up, as opposed to incurring costs over a six-year loan period,” said Peffer, noting that, a decade or two ago, leasing was reserved for commercial buyers, but today it has gone mainstream, and a third or more of Balise’s new-vehicle sales are leases.

Leasing is also popular at Bertera and accounts for 38% of its new-car business. “Technology is moving so fast, and people want the latest advances. Plus, a segment of the population is always going to have a payment, and they can get a brand-new car every two to three years with a lease,” Lewis said.

He explained that the average payment on a purchased $40,000 vehicle is $500 a month for six years, but the same vehicle can be leased for $300 to $350 a month with very little money down, which makes it attractive.

Kupec noted that the appeal extends to different age and economic groups, especially since people who do a lot of driving can build additional miles into a lease.

“People are more receptive to leasing than ever before,” he said, adding that 40% of the store’s new-car transactions are leases.

Prentiss told BusinessWest that a large portion of Millennials would rather lease than buy a new vehicle. “It has to do with their psychology; they think a three-year lease is long enough.”

The market for electric vehicles is also growing. Cosenzi said the Hyundai Ioniq, which is scheduled to come out in the next month, will have a battery-only model with an electric driving range of 124 miles and an EPA rating of 136 miles per gallon.

From a big-picture, national-economy perspective, the road ahead is certainly marked by unpredictability and guarded optimism.

In the auto industry, through, there would appear to be fewer potential bumps in that road and apparently smooth riding. As noted by all those we spoke with, a number of factors are contributing to greater confidence on the part of consumers, and this is translating into greater activity at area dealerships.

As they say in this business, there is plenty of tread left on those tires. 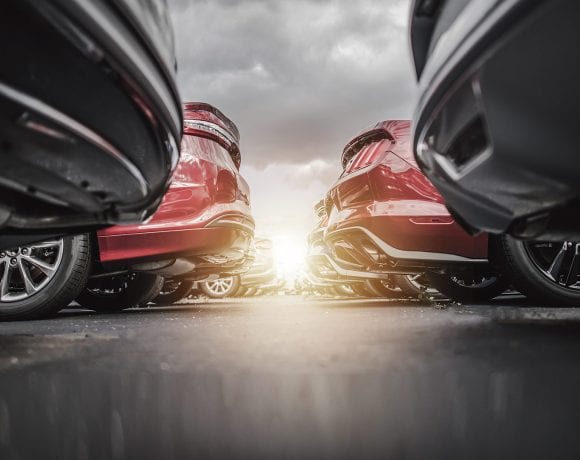 Auto Industry Continues to Be a High-revving Engine