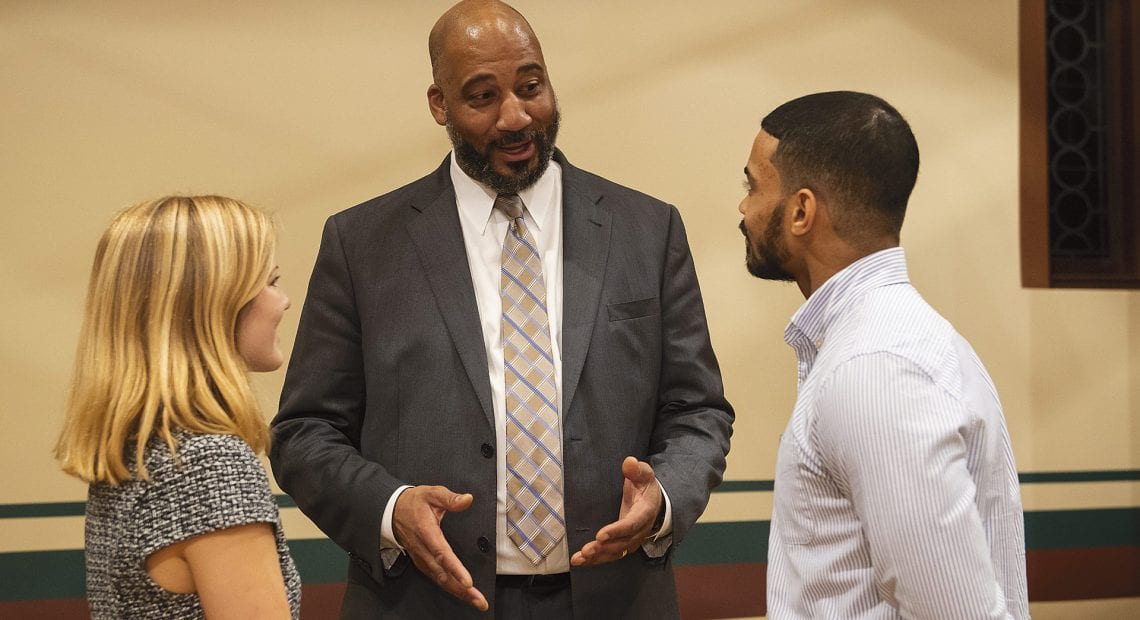 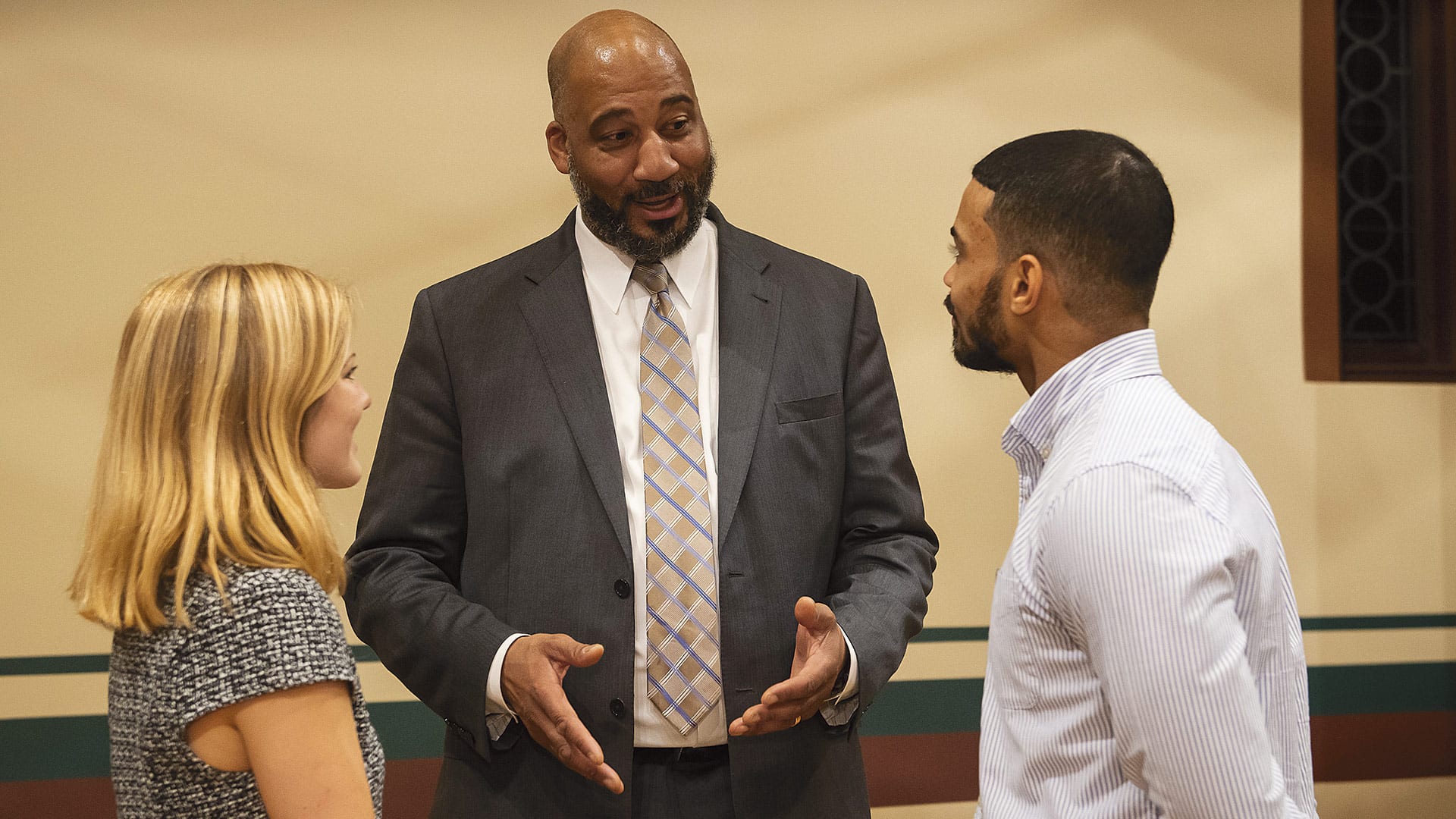 Gregory Thomas says he’s energized by working with young entrepreneurs as the new executive director of the Berthiaume Center.

People may know the Berthiaume Center for Entrepreneurship from its public events, most notably the Innovation Challenge, where UMass Amherst students compete for seed money to turn entrepreneurial ideas into viable businesses. But the center’s new director, Gregory Thomas, wants to broaden the center’s reach and help more young people understand that the goal isn’t to win a competition — it’s to develop a true entrepreneurial mindset that will serve them well no matter where their lives take them.

On the surface, the UMass Amherst students who competed in the recent Minute Pitch at the university’s Berthiaume Center for Entrepreneurship were vying for a top prize of $1,000 and the ability to move to the next stage of competition in a program known as the Innovation Challenge.

But, on a broader level, there’s a lot more at stake.

Take, for example, the winner, an app called Find a Missing Kid, which aims to help identify missing or exploited children in public settings like schools, routine traffic stops, and public transportation. It was proposed by Grace Hall, Arta Razavi, and Cameron Harvey.

Earning second prize was Let’s Talk About It, developed by Ashley Olafsen and Thomas Leary, which seeks to provide relevant wellness-related curriculum to schools and individuals, with a focus on topics like mental health, self-esteem, consent, eating disorders, and relationships.

Third prize went to Devin Clark for Digital Mapping Consultants, with the goal of producing crop-health maps for the agricultural industry in order to guide precision agriculture to increase yields while reducing inputs throughout the growing season.

These are all with the potential to change the world — or, at least, dramatically change the lives of individuals who use them.

Gregory Thomas likes when ideas like that emerge, and are given the support to advance beyond the idea stage. And, as the new executive director of the Berthiame Center, he wants to see more of them.

“We need to figure out how to get more stuff into the funnel,” Thomas told BusinessWest. “The more ideas and more ventures we get coming through the funnel, the more we get on the other end, stimulating the economy.”

The Innovation Challenge, a four-part entrepreneurship competition that launches promising ventures to the next levels of startup, is perhaps the best-known of the Berthiaume Center’s initiatives, but Thomas is hoping to increase the center’s impact in other ways, both on campus and off — and even across the planet, through ventures that break through to market. 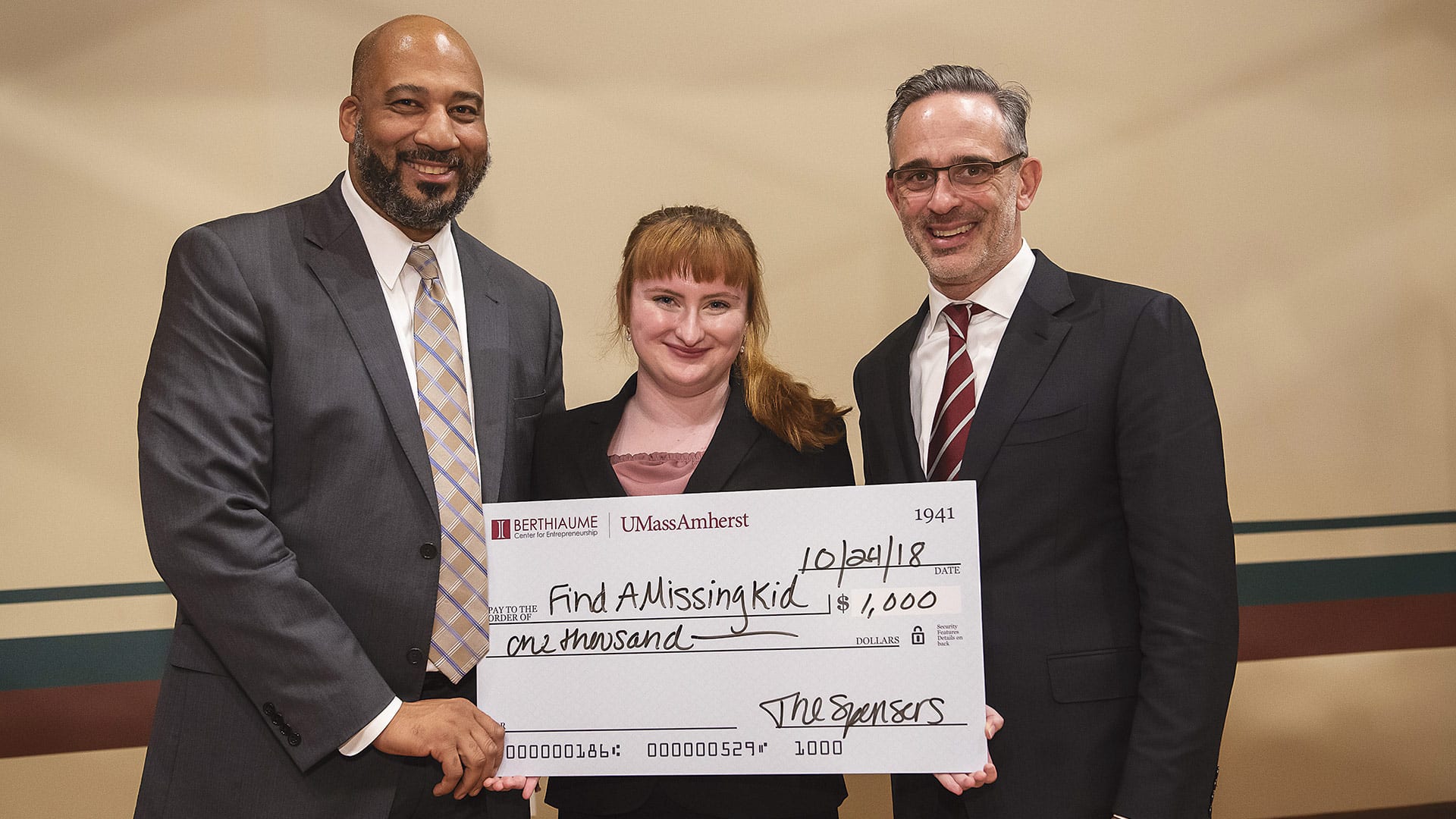 Grace Hall receives the top prize in the Minute Pitch from Gregory Thomas (left) and Tom Moliterno, interim dean of the Isenberg School of Management.

“Our mission is to teach students how to be a successful entrepreneur, how to run a venture so it’s successful — which includes knowing when to pivot and shut down an idea and find a new one,” he noted. “We also encourage curiosity — what really drives you. You may have a cool idea, but who would buy it and why? How would you make money? We have to teach those fundamentals to our ventures. Otherwise, they’re just polishing presentations to win a challenge. The challenge is the carrot to get them in the door. After that, we teach them to be entrepreneurs.”

He added that most of these students aren’t going to become the next Steve Jobs, but whether they wind up working for somebody or start their own business, entrepreneurial skills translate well to the workplace, and will always make them more effective on whatever path they choose.

That’s why he wants to broaden Berthiaume’s programs and keep students interested in them — not just those who win money to advance their ideas, but the ones who didn’t make the finals, or didn’t apply in the first place. Because those students, too, have ideas that could one day change lives.

“What can we do to help them perfect their craft and work on their ventures and keep them in our ecosystem, continue to educate them?” Thomas said. “There’s a reason why we’re not getting everything into the funnel, and that’s something I’d like to work on with key leaders on campus. How do we get more into the funnel?”

There’s plenty of room in that funnel, he said, and sufficient brainpower on campus — and well beyond it — to help students not just win a prize, but think like entrepreneurs for the long term.

Ask Julie Bliss Mullen about that. She developed an innovative technology that uses electricity for water filtration. In 2016, trying to figure out how to bring the idea to market, she filed a provisional patent with UMass and enrolled in entrepreneurship courses to further understand the commercialization process.

“The Berthiaume Center has been instrumental in making my ideas reality,” Bliss Mullen told BusinessWest. “As a Ph.D. student, I was used to conducting research, but had no clue what to do with an idea, let alone form a startup. They helped me to put things into perspective, making me think about what box I envision the water-purification device being sold to consumers even before I came up with a name for the company. This kind of thinking quickly made my idea a reality.”

The center also helped her vet potential co-founders for her business. While taking a graduate-level entrepreneurship class, she met Barrett Mully, a fellow at the Berthiaume Center who was attending the class as a teaching assistant. The two partnered up and eventually won the top award at the Innovation Challenge, claiming $26,000 in seed money to help jump-start the company, which was initially named ElectroPure and later renamed Aclarity.

They were accepted into the inaugural Berthiaume Summer Accelerator in 2017, and it used that experience to continue customer discovery, meet with mentors, work with the university toward converting the patent, develop a business strategy, and advance technology research and development. The company won additional seed funding — including a $27,500 prize from the Valley Venture Mentors Accelerator Awards earlier this year — and embarked on a collaboration effort with Watts Water Technologies Inc. to help bring a residential product to market.

“It was through Berthiaume that I learned how important product-market fit and developing and testing a business model is,” Bliss Mullen told BusinessWest, adding that they were introduced to investors, subject-matter experts, accelerators, grant agencies, and mentors through the Summer Accelerator. “I’ve always had a spark for entrepreneurship, but it was really Berthiaume that guided me through the unknowns and made me realize my passion.”

The Innovation Challenge, simply put, is a series of competitions designed to assist and reward UMass students and young alumni pursuing a novel business idea and developing it into a marketable product. The goal is for interdisciplinary teams to conceptualize a product with regard to its scientific and technological design, identify customers, and create a business plan for the product’s commercialization.

The first phase is the Minute Pitch, the event won last month by Find a Missing Kid. True to the name, students have 60 seconds to pitch their venture ideas to a panel of judges. No written business models or plans are required, and mentors are on site to provide feedback.

The second phase is the Seed Pitch Competition, in which participants form business models and perfect their elevator pitch. Where the Minute Pitch offers $2,500 in total awards, this second step distributes $15,000 to select teams as determined by the judges.

The third phase, the semifinal, simulates an investor boardroom experience, in which the young entrepreneurs present their venture to a panel of judges in a closed-door setting and compete for a spot in the final. During that final, the best projects vie for a total of $65,000 in seed money to move their ventures forward.

“The first chapter of Berthiaume was really focused on building a foundation of events and curriculum for UMass students — and, quite honestly, it has been a limited group of UMass students,” Thomas said.

While the center has distributed more than $300,000 to new ventures and built partnerships across campus and the Valley, he added, the next step will be to broaden all of that. 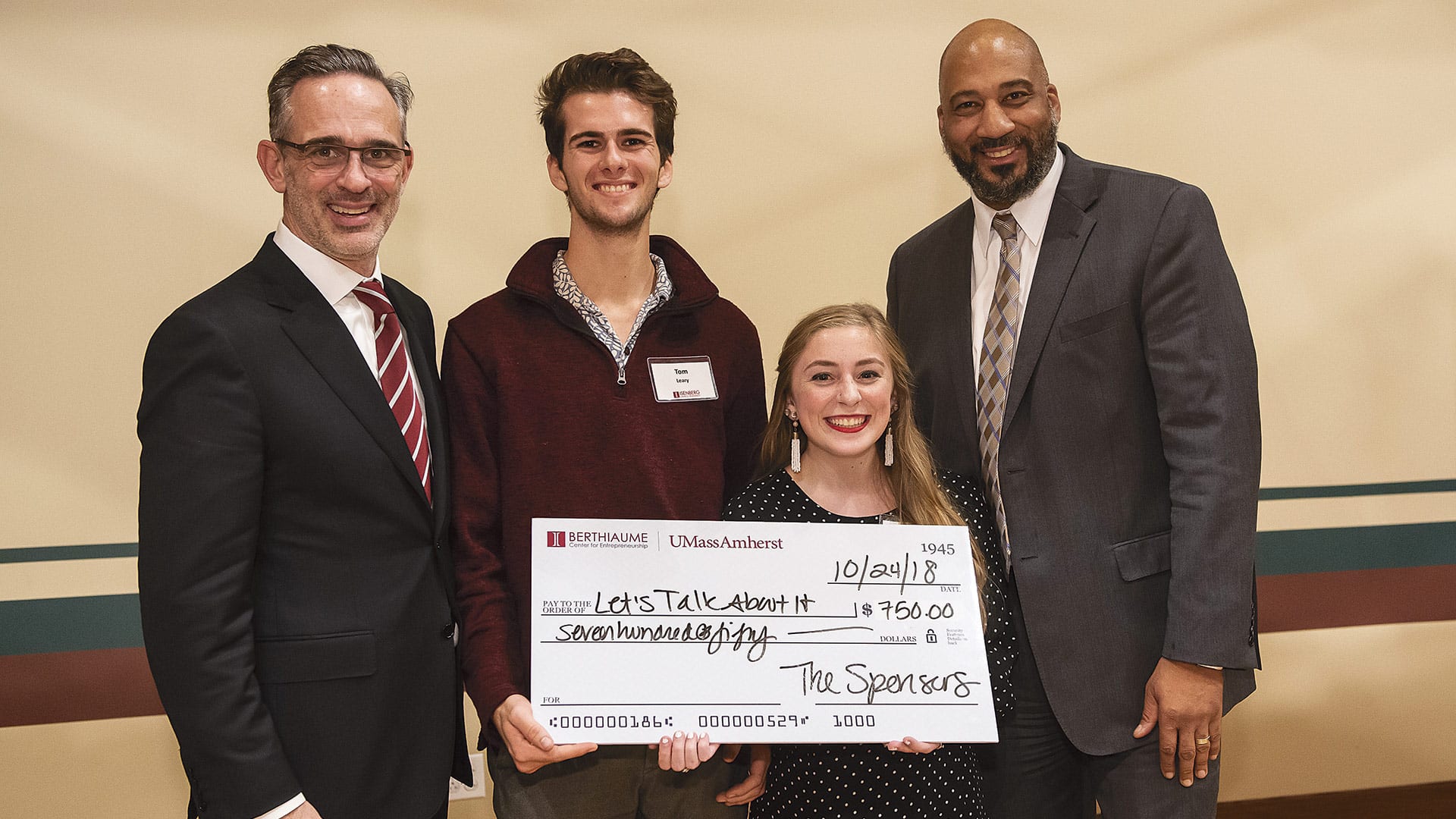 “We want to expand on campus and expand partnerships in the Valley with organizations like VentureWell, which focuses on entrepreneurship and training, and Valley Venture Mentors and the EDC. We should be building and rebuilding our connections there,” he went on. “Today, Berthiaume is a catalytic entity to stimulate entrepreneurship and entrepreneurial thinking in the ecosystem.”

To that end, the center has started building a “mentor network” of community leaders and social entrepreneurs, he explained. “It could be alumni and entrepreneurs who are interested in volunteering their time to coach our team, so they can get better at not just reaching out in the community, but expanding our community and growing the ecosytem.”

Thomas brings a broad base of business experience to his current role of evolving the Berthiaume Center’s mission. Most recently, he held various senior-level global manufacturing, finance, and control roles with Corning Inc. During the last five years at Corning, he was a strategist in the Emerging Innovation Group, focusing on bringing new products, processes, and businesses to market.

“There are some cool things happening here,” he said. “For a guy who graduated from Technical High School in 1986 but hasn’t lived in Springfield for 32 years, it’s very exciting for me to come home and see all that’s going on. I’ve come home to a bustling Pioneer Valley.”

He also brings experience as a consultant to nonprofit organizations, as well as being a prolific volunteer and fundraiser. A 1991 alumnus of UMass Amherst, he never lost touch with his alma mater, recently serving as president of the UMass Amherst Alumni Assoc. board.

“I’ve been involved and seen most of the progress that UMass has made,” he told BusinessWest. “Now, instead of volunteering, I’m doing everything I love and used to do as a hobby, and being paid for it.”

Meanwhile, Stephen Brand, who has taught entrepreneurship at colleges and universities across the country, was recently named Berthuame’s new associate director. Thomas and Brand join Carly Forcade, operations and student engagement specialist; Amy LeClair, office manager; and Molly O’Mara, communications, events, and constituent relations coordinator, all of whom joined the center during the past year. Bruce Skaggs, Management Department chair, serves the center as its academic coordinator, aligning curricular offerings between Berthiaume and the various departments across UMass.

Recently, Thomas visited MIT to visit with Trish Cotter, executive director of the Martin Trust Center for MIT Entrepreneurship, to exchange ideas, including how to develop a system where people are interested in investing in startups in an altrutistic way — not angel funders looking for a return, “but people who just genuinely want to help them and will volunteer some of their time to strengthen our economy and our community,” he said.

It’s just one of many ideas being kicked around by Thomas, who said he stopped drinking coffee in August, yet is enjoying a higher energy level than ever, simply because he’s energized by the potential of the Berthiaume Center to make a difference in even more lives.

“It’s hard for me to sleep. I wake up ready to go. There are so many exciting things going on,” he told BusinessWest. “Entrepreneurship affects lives — and I’m excited to be back in the Pioneer Valley, seeing the impact of entrepreneurship on lives and communities.”