The Bing Arts Center Raises Its Profile — and Needed Funds 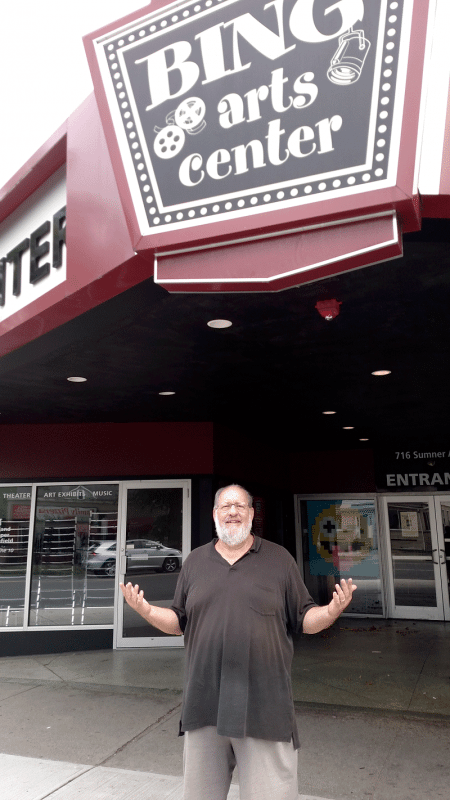 Folks who grew up in Springfield’s Forest Park area or near the X commercial district have fond memories of attending movies at the Bing Theater — at least, until it was shuttered in 1999 for non-payment of taxes. But a 13-year (and counting) effort to revitalize the site into a multi-purpose arts center has the place buzzing again, with a regular schedule of arts events. Now comes the bigger challenge — renovating the Bing’s main theater and turning it into a regional destination.

Brian Hale remembers growing up near Springfield’s historic X district and watching movies on Saturdays at the Bing Theater. Those excursions, he understands now, were helping to lay the foundation for a lifetime of appreciating the arts — not just film, but art in all forms.

Hale, owner of Design WorkShop Inc. in Springfield and president of X Main Street Corp. (XMSC), the nonprofit that owns the Bing, spends a lot more time there these days than he did as a kid, not just appreciating the arts, but trying to raise their profile and make the facility the community centerpiece it once was.

It hasn’t been an easy road, and there’s still a long way to go, but there is once again a palpable buzz about what is now known as the Bing Arts Center.

“It’s very intimate, very sociable; it’s a listening room, not a bar,” he said of the unassuming structure on Sumner Avenue, which is slowly being renovated while hosting music and educational events in its small lobby, flanked by two small art galleries. “It’s a welcoming space where people can feel comfortable coming and meeting friends. This is about making the community a better place, and a good way to do that is through the arts.”

I get frustrated with the state of the world and the community as much as anyone. But I feel like nothing brings people together like the arts, and having a community space that attracts a wide variety of people from the city who might not otherwise run into each other.”

Since reopening for cultural and community events in 2010, the Bing has quietly built a busy schedule of performances, all of which take place in the building’s front lobby because the former theater space is in need of a serious remodel. But Hale’s vision, and that of his fellow board members and area arts supporters, is to see the entire venue open once again, with multiple spaces housing gatherings both large and small, indoors and outdoors, perhaps even on the roof — all of it, he told BusinessWest, aimed at bringing people together over shared passions during a time when Americans increasingly feel polarized by current events.

“I get frustrated with the state of the world and the community as much as anyone,” he added, “but I feel like nothing brings people together like the arts, and having a community space that attracts a wide variety of people from the city who might not otherwise run into each other.”

The Bing has achieved part of that goal already. The rest will take a lot more work — and money. But the end result, Hale said, will be one more attraction to further stamp Springfield as a city clearly on the rise.

The building wasn’t always a theater, but originally housed Kossaboom’s Service Station through the ’20s, ’30s, and ’40s. When it closed, the pumps were removed, the front of the building reconfigured, and an auditorium was built in the rear.

The Bing Theatre, named for then-superstar Bing Crosby, opened in 1950 with a showing of Samson and Delilah. For the next half-century, the movies kept coming, concluding that era with Gus Van Sant’s shot-by-shot remake of Psycho. That was in 1999, when the city of Springfield took the property for non-payment of taxes, and all activity ceased on the property. 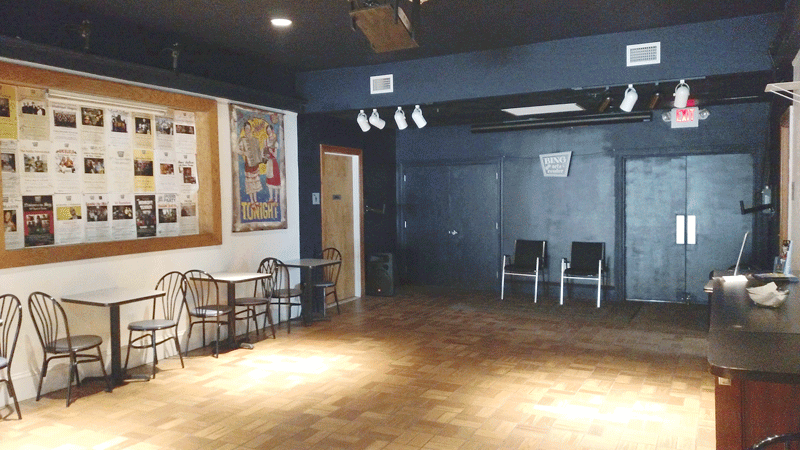 With the main theater currently unusable, the Bing hosts myriad concerts, lectures, films, and other activities in its lobby.

But before long, a group of arts advocates and business people held a series of meetings and suggested the theater should be used as an arts center.

“The city put out an RFP for some type of community arts use, and our organization, the X Main Street Corp., made up of local business people, got involved,” Hale said. “These Main Street corporations are all over the country, and are generally created to try to revitalize urban commercial districts like the X.”

The organization was formed in 1995 to help revitalize the Forest Park neighborhood, the X commercial district, and the Sumner Avenue corridor, with efforts like starting the Forest Park Farmers’ Market, operating a food-security program, and securing significant streetscape improvements for the area, including new streetlights, benches, planters, and other touches to make the neighborhood more attractive. The XMSC also managed a façade-improvement program and developed and presented a series of technical-assistance seminars for local businesses.

The Bing posed a more significant challenge — but a great opportunity as well.

“When I saw this space was available, I said to the board, ‘this would make a great arts center. We could stimulate development, get people here at night; it’ll be good for local restaurants.’”

In 2002, the board of directors decided to adopt the strategy of arts accessibility to strengthen the community culturally and economically. XMSC then became the preferred developer for the former Bing Theater and, in December 2004, finally convinced the city to sell the property to the nonprofit.

Plans were formulated to convert the storefronts to gallery space, bring everything up to code, and use the former lobby as a multi-purpose space. The marquee and façade were also renovated. After six years of planning, fund-raising, and work, the Bing Arts Center opened in June 2010, and now presents regular cultural and educational programming — everything from visual arts and film screenings to musical performances and art classes — in addition to hosting meetings for other community groups, serving as a neighborhood hub.

“We’ve made an impact. We wanted it to be an arts center and offer as much diverse, eclectic content as we could,” Hale said, rattling off some of the performers who had been through in only the past few weeks, ranging from local rock bands to chamber ensembles to a folksinger from Sweden. Meanwhile, local artists are invited to display their work in rotating exhibits in the storefront galleries that flank the lobby.

“We also have a pop-up gallery where anyone can put their art on the wall for an evening and sell it,” he added. “We have refreshments and music; it’s a fun thing. People who want to see their work in a public space can come in and do it.”

The center also promotes connections between artists and the public instead of building walls between them, he added.

“A filmmaker makes a movie and shows it here, and people enjoy talking to them — ‘how did you do this?’ ‘How did you shoot this scene?’ That’s a good way to experience the arts.

“Springfield does big arts pretty well,” he went on. “We have Symphony Hall, CityStage, the MassMutual Center, and Theodores’ is a great little club; there’s a lot of good things to do. But there isn’t really anything else like the Bing in the area.”

To reach Hale’s goal of restoring the large theater, with the goal of featuring national-release independent and art films, preparations for phase 2 are underway. The theater will initially be configured for 300 to 350 seats, including a mezzanine, which it did not have before. The original theater held more than 900 seats, but the plan, as designed by local architect Stephen Jablonski, will accommodate two separate spaces, the main room for larger audiences and a smaller, adjoining space for smaller events. 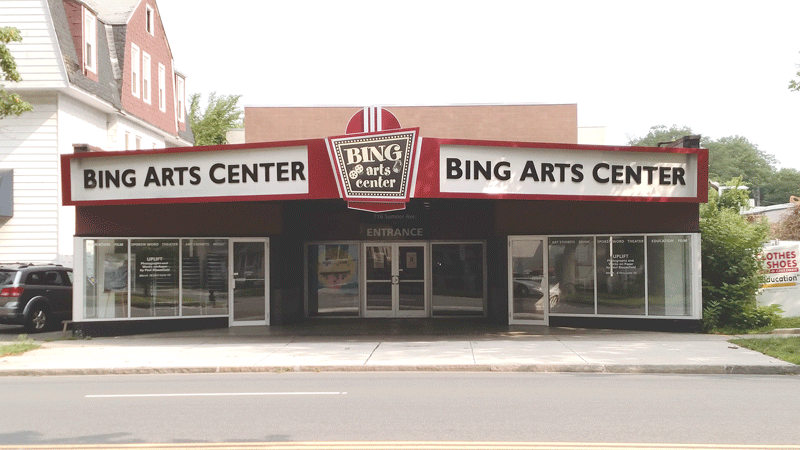 Phase 1 of the Bing’s revitalization saw its façade, lobby, and gallery space renovated, while phase 2 aims to bring back its large theater.

Achieving all that will take about $1 million in fund-raising, but Hale also envisions creating a roof space for outdoor events, which could also be rented out for parties and receptions. “It would be the coolest arts venue in the valley if we had that,” he said, but admitted that addition could push the price tag close to $4 million.

Support for the main theater restoration has come from unexpected places, including a woman Hale went to school with in Springfield; she lives in Arizona now, but the two have kept in contact on Facebook, and she has donated periodically to the Bing’s revitalization. Recently, she and her husband reached out with a request to purchase naming rights to a program, and after a $25,000 donation, her parents have been memorialized with the Richard and Ethel Hanley Arts Education Program.

Understanding that the valley is full of companies and individuals with the resources to make large gifts, Hale hopes it won’t be the last such naming opportunity. It’s an investment worth making, he added, noting that people talk about the rise of Springfield’s downtown, but only a few thousand people actually live there, while some 26,000 call the X and Forest Park area their home.

“Younger people are coming back to cities; they don’t want to live out in the suburbs, and this is definitely a crucial piece,” he said of attracting that new, younger generation of city dwellers.

“The arts can’t change a place by itself, but they are vital, no doubt,” he added. “A city has to think of itself as a business. You need residents moving into your city. There aren’t enough places for musicians to play, for artists to exhibit, places for arts education that bring artists and the community together, where they can actually interact. But it’s happening here.” 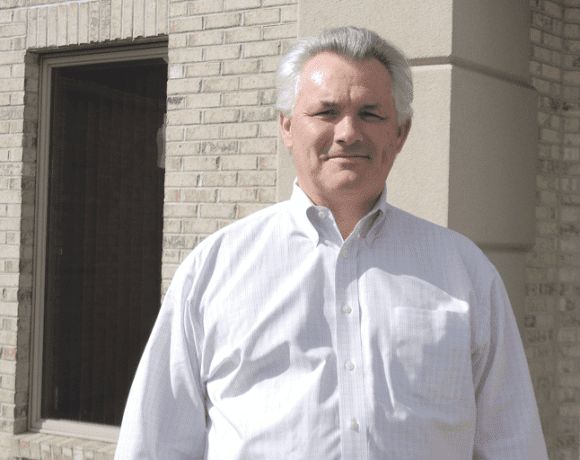