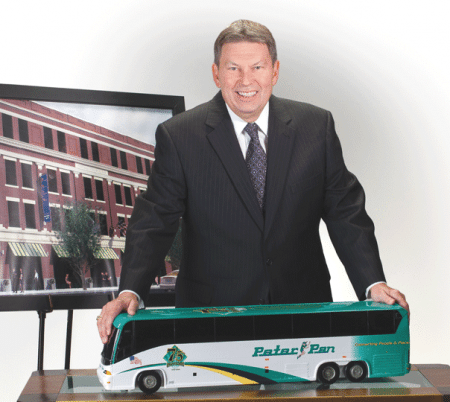 The walls and credenza in Bob Schwarz’s office are cluttered with mementos and awards from a more-than-40-year career in business and community service — and together, they tell a compelling story.

While many of the items are individual in nature, most involve the company, Peter Pan Bus Lines, for which he has worked for more than 25 years. And that’s appropriate, because most times it’s hard to separate one from the other. And more than a few items involve occupants of the White House, or occupants in the making.

First, there’s the picture from Bill Clinton’s first inaugural parade. It shows, crossing in front of the reviewing stand, the Peter Pan bus that Clinton and key members of his election team took on the first 1,000 miles of his post-convention campaign in 1992. Schwarz was one of the company’s employees who made the trip down. Meanwhile, there are a few framed, handwritten notes to Schwarz from George H.W. Bush, dating to his days as ambassador to the United Nations in the early ’70s, when the two had become acquainted. He signed them using the nickname many knew him by: ‘Augy.’

But perhaps his most treasured item is the national Community Champion Award that he received from the U.S. Interagency Council on Homelessness in 2008, for which he made another trip to Washington. And there’s a story behind this one that he likes to tell.

“I didn’t take a bus this time, and I should have,” he recalled. “My wife didn’t want me to wear my suit down, so I packed it. And of course, the airline lost my luggage — and really didn’t seem too interested in finding it. The experience gave me the opportunity to know a little about what it feels like to be in a city with nothing but the shirt on your back.”

Schwarz was eventually hooked up with a clean shirt, tie, and jacket, and received his award from then-‘homeless czar’ Philip Mangano, who praised him for his efforts as part of a nationwide program to end homelessness. Locally, Schwarz told BusinessWest, that effort was not about placing people in shelters, but instead in finding them permanent housing.

“It’s been proven that putting people in shelters does not really put a stop to their being homeless,” he explained. “It’s just a stopgap; we need more permanent solutions.”

Schwarz’s work to stem the tide of homelessness constitutes one of several reasons why he was chosen as a Difference Maker for 2012. Others include his work with the United Way, the Eastern States Exposition, the New Leadership Charter School and its library, which he helped create, and especially as chair of the Literacy Works Cabinet of the Regional Employment Board.

And as he talked about these various initiatives and his involvement with them, Schwarz said he’s been helped tremendously over the years by the very positive influence of role models in the broad realm of community service. Exposure to them came through his work with the Greater Springfield Chamber of Commerce, which he served in several capacities, from manager of Government Affairs to president.

“I was this young kid managing a chamber, and I had this incredible opportunity to work with and learn from so many great business leaders,” he said. “People like James Martin at MassMutual, Wilson Brinnell at Third National Bank, Bill Janes at S.I.S., and then later Bill Clark at MassMutual, Paul Doherty [a Springfield attorney], and David Starr [publisher of the Republican]; these individuals began to instill in me a philosophy about corporate social responsibility and the responsibility of the business community to give back.”

Perhaps the most influential of these role models, however, was the man he would later go to work for, Peter Picknelly, president of Peter Pan, who was chairman of the Greater Springfield Convention and Visitors Bureau when Schwarz started with the chamber and was later its volunteer president.

“There was no one more generous in giving to his city than Peter Picknelly,” Schwarz told BusinessWest. “Peter really believed in Springfield, and also in the responsibility to become active in community organizations; it was a way of life at Peter Pan.

“Peter told me that, if I ever decided to get a legitimate job, I should give him a call,” Schwarz continued with a laugh, noting that, a few years after that initial proposition/challenge, he took up Picknelly on his offer, joining the company in 1986.

Since then, he has become involved in a number of the transportation and real-estate-related ventures initiated by Peter Pan and its subsidiaries. This includes everything from the bus line’s decision in the late ’80s to take on archrival Greyhound by expanding its reach along the East Coast (there’s a framed Boston Globe business page story on this move hanging in his office) to the current efforts to revitalize the property in Springfield’s Court Square.

But amid his exploits in business, he has always devoted considerable time and energy to community service. And while this commitment to giving back has manifested itself in many ways, the two most notable have been his efforts to promote adult literacy and the fight against homelessness — and both were in many ways inspired by Picknelly.

Recalling his work with literacy efforts, Schwarz said they really started when Bill Ward, whom he hired to manage what was known many years ago as the Private Industry Council, asked him to serve on the board of what’s now called the Regional Employment Board of Hampden County. “And when you become a member of Bill’s board, you don’t just become a member; he gives you an assignment.”

And Schwarz’s was (and is) adult basic education (ABE) and English as a second language, two causes that became the focus of a project in Holyoke originally conceived by Peter Picknelly — transforming the old main fire station into a combination transportation hub and ABE center.

“It became a passion for me, and a natural when Peter Sr. decided to build the transportation center,” Schwarz recalled. “He saw this as an opportunity to do something very unique and very different, and do something that hadn’t been done before in this country, which was Peter’s style, and something that would make a real contribution.”

Meanwhile, Schwarz said his work with the homeless was in many ways inspired by views of a tent city on the route taken by the funeral procession following Picknelly’s death in 2004 — and commentary offered by Picknelly’s son, Peter.

“He said, ‘this is not the Springfield my father loved and worked all his life to build; we simply can’t have homelessness,’” Schwarz recalled, noting that he was later approached to join (and become the first chair of) then-Mayor Charles Ryan’s program to eliminate homelessness in the city, called the Housing First Initiative.

“I’ve had the chance to participate in a lot of volunteer efforts over the years, but this was one of the most challenging and interesting assignments I’d ever taken on,” Schwarz told BusinessWest. “It was a very interesting time when street and individual homelessness was on the rise, and the ULI report came out and said, ‘the city of Springfield will never reach its revitalization potential unless the issue of homelessness is dealt with.’”

Only a few years into the 10-year initiative, homelessness had been reduced by 39%, said Schwarz, adding that one of the keys to achieving such results was the creation of the Homeless Resource Center on Worthington Street, a feat he called one of the most rewarding of his life because of the economic and logistical challenges to overcome.

“The economy was lousy; this was a time when individuals were losing their jobs and businesses were cutting back,” he said. “To think that you could raise $1 million in private capital to put toward a homeless resource center is pretty remarkable. The people in Las Vegas wouldn’t have given us high odds of success, but we did it, because it was the right time and the right thing to do.”

Because of his hard work in such endeavors and track record for gaining results, Schwarz will have to make room for another item on his credenza — the plaque recognizing him as a Difference Maker for 2012. 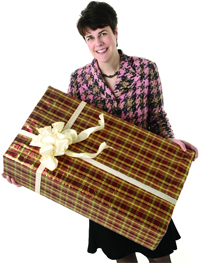